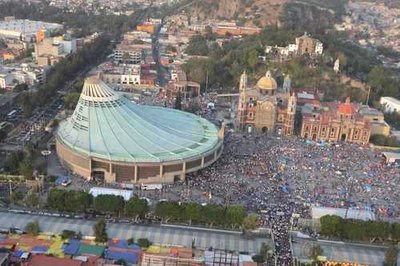 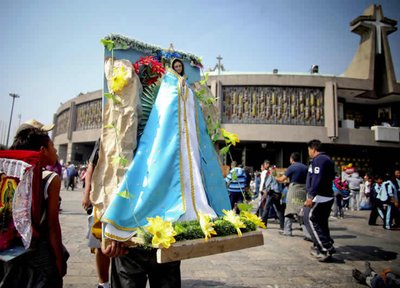 Over the past few days, there has been a constant background noise of firecrackers.... crack...crack..crack...boom! As you make your way around the city, you are sure to come across men, women and children walking, cycling, riding in the backs of open trucks, singing, carrying images, or bending over with large framed pictures on their back. Lots are wearing T-shirts bearing the same design. So where are they going and why the pilgrimage?

Here in DF we are in the throes of Mexico City's largest Catholic festival, in honour of the Virgen de Guadalupe (Our Lady of Guadalupe), Mexico's patron saint, which takes place around the 12th December. This year, by the end of the several-days-long fiesta, seven million people will have made the pilgrimage to La Basílica de Guadalupe on the outskirts of the city where the original image of the Virgen de Guadalupe is kept, said to be "responsible for uniting pre-Hispanic Indian mysticism with Catholic beliefs". One or two have cycled up to 1200 km from other parts of Mexico, others crawl in on their knees, many come from the surrounding states. Roads are closed or blocked, police cars and police motorbikes escort caravans of people, and trucks decorated with tinsel and images accompany pelotons of by-now wobbly cyclists. Early Sunday morning, before 8 o'clock, as I cycled through the centre wrapped in my jumpers and gloves due to Cold Front Nº 19, I saw groups of families including young children marching their way down Paseo de la Reforma. Some pilgrims have been walking for 4 days. Someone once said that it is virtually impossible to understand Mexico and its culture without appreciating the Mexicans' devotion of La Virgen de Guadalupe. I can believe that. 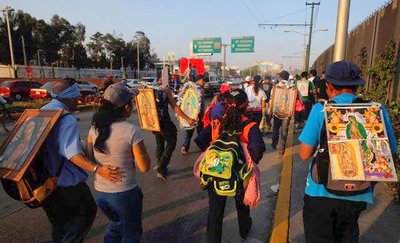 Pilgrims on their way to La Basílica 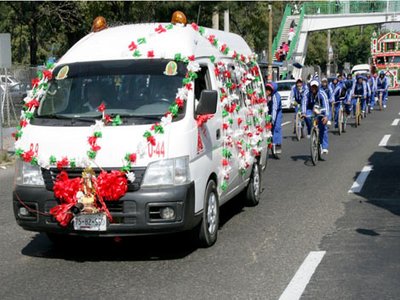 When they arrive at La Basilica, reputedly visited by more people than St Peter's Basilica in Vatican City or the shrine at Lourdes, they will queue up to venerate the original image of Our Lady of Guadalupe, sing Las Mañanitas to her and attend a special mass. These days, unless it is your intention, it's better not to accidentally find yourself in that area since it has become the chaotic, colourful venue for teeming masses of weary travellers. Stalls selling sustenance for the body and soul abound. Scores of peregrinos lay sleeping on the ground in a state of combined physical, emotional and spiritual exhaustion. Dancing, music, singing and lots of sharing goes on. Sometimes the unexpected happens. This year, a lady accompanied by her husband and three children was just minutes away from the Basilica when she went into labour and the baby was born there and then. The mother missed her chance of going inside since she and her new-born baby were taken to hospital. 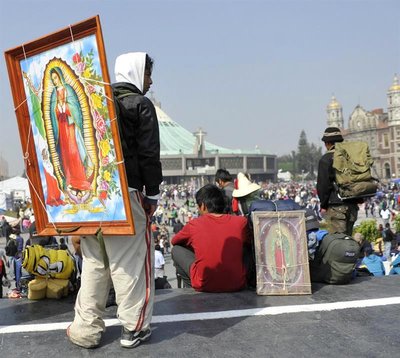 Devout follower carrying a framed picture on his back 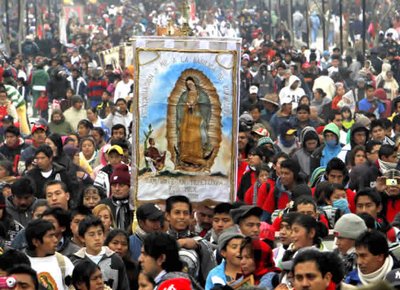 Masses of pelegrinos at La Basílica 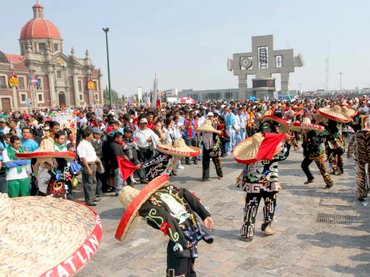 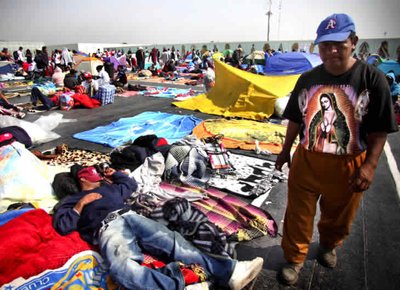 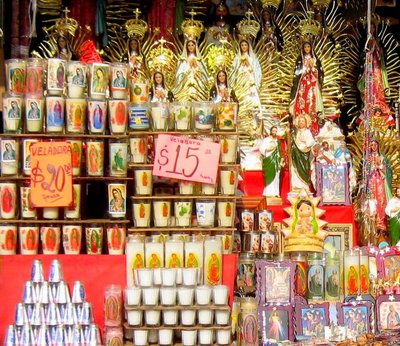 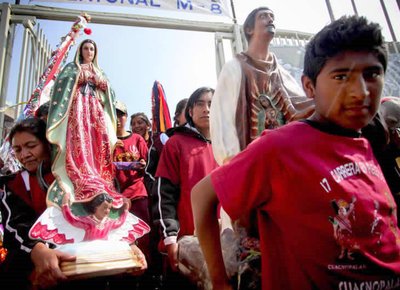 Carrying images of Mary and other saints

La Basílica de Nuestra Señora de Guadalupe is built on Tepeyac Hill where the Aztec goddess Tonantzín, known as "Our Revered Mother", was worshipped in pre-Hispanic time. It also happened to be the very spot where according to tradition, on 9th December 1531, a poor Indian Juan Diego saw a vision of a lady dressed in a blue mantle who told him to build a church there. The local bishop wanted some proof that it was in fact the Virgin Mary so he asked the peasant to bring him some evidence. Juan Diego returned on 12th December and the Virgin Mary told him to gather up some flowers from the hill in his tilma or cloak and take them back to the Bishop. When he opened up his cloak, the flowers dropped out and the image of the Virgen was miraculously emblazoned on the fabric. The Bishop needed no further convincing and immediately ordered a church to be built on this spot. On completion, the image on the original cloth, framed in gold, was hung there. Since then, millions of devout followers make the pilgrimage to see this image which continues to baffle experts. To many, it sounds suspiciously like a rather cunning ploy on the part of the Spanish priests to get the Indians to convert from their Aztec beliefs to Catholicism. Whether or not the story or image is authentic, however, is not an issue for the masses of fieles whose faith in La Morenita is boundless and who come to thank or ask her for her favours and to make promises they may or may not keep. Since the old church was unable to handle such an enormous number of people, the New Basílica with its spectacular bold design was opened in 1987. 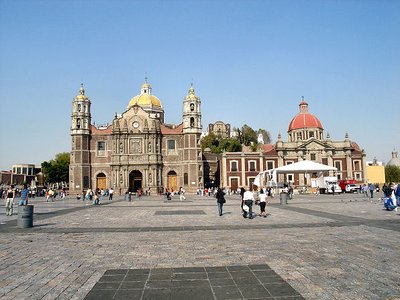 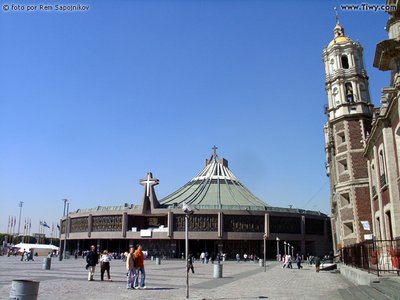 The New Basilica next to the old church 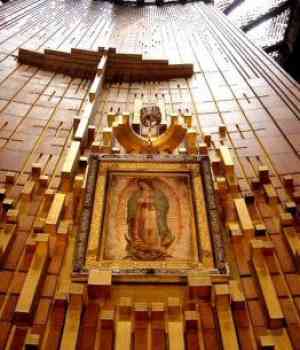 The original image hanging inside the New Basilica 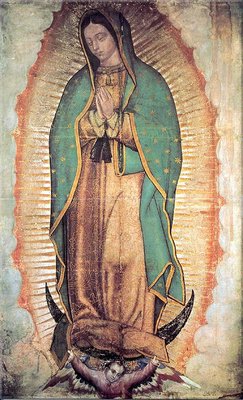 The original image on fabric on show in the Basílica

La Basílica de Guadalupe is, in fact, the most important Catholic shrine in the Americas and is visited by millions from all round the globe every year. These days especially, though, it has been attracting waves and waves of Mexican pilgrims who have engulfed the city not only to venerate La Virgen de Guadalupe on the 12th but also to celebrate on the 9th the feast day of Juan Diego, who was canonized by the Pope in 2002, invoking him as the "protector and advocate of the indigenous peoples". I'm sure many too will stop to do a bit of sightseeing in the Zócalo while they are here. Then they will be gathering up their mats, blankets, bags and backpacks, (and maybe even their pots and pans), and beginning the journey back home, which may take anything from several hours to several days. 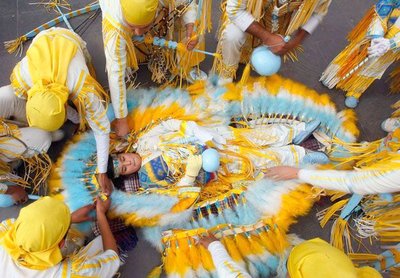 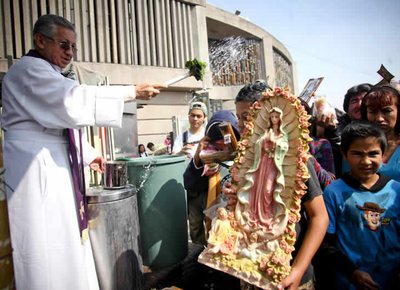 And as some would say, it may be that, after all these centuries, the Mexicans are in fact still worshiping their goddess, albeit under the guise of their unique synchretic brand of Catholicism.