The earth quakes in Mexico City 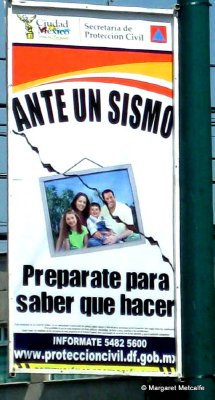 Sign seen in the streets telling people to prepare for earthquakes

Last Saturday evening, just before 8 pm, the city shook as an earthquake, 6.5 on the Richter scale, struck. Apparently, it was one of the strongest earthquakes since the devastating one that hit Mexico City on 19th September 1985, killing thousands.

It was definitely the strongest one I have felt since living here in Mexico. Strong enough to send the lampshade swinging wildly. The French windows buckled, the floor shook and the table rattled and moved several inches from the wall. It lasted just over 40 seconds. Actually, I thought it was strong wind at first. Just a few minutes earlier, I had brought in two star-shaped piñatas from the back porch because they were blowing chaotically in the wind. Ozzy was disturbed by them and the hummingbirds weren't happy about coming to the nearby feeders because of the noise and movement. So my immediate thought was that I had left the French doors open slightly and that was why the light in front of them was swinging so much and the windows moving. Of course, that didn't explain why the table was rattling or that it had moved out from against the wall. But when I checked the French doors, I realised not only were they well shut, but they were locked. It couldn't have been the wind. My second thought was, "Wow! That must have been a huge truck going past to do that!" My third attempt at an explanation was that it had been an earth tremor. Josep has felt quite a few strong ones as his office is in a vulnerable area in the centre, but I had only experienced some small shudderings here. I quickly went into the front room where he was busy wrestling with the innards of a portable radiator, brandishing a screwdriver.

"What was THAT?!" I said. "What was what?" he asked, looking up for a moment. "Everthing was moving!" By then, I was almost certain it must have been an earthquake. Marc rang a few minutes later from a friend's house. "Did you feel the earthquake?" They had all rushed downstairs and out into the street. And then when we tried to contact Cristina, on her way to a Christmas supper, all the lines were down. She told us later that her friend's father had rang them while they were in the car. "Are you alright?" he asked worriedly. They were surprised by his tone. "Yes, why?" They hadn't felt anything. Her friend's flat, on the 16th floor, had done a good bit of swaying and things had fallen off the shelves. No wonder her Dad was concerned. 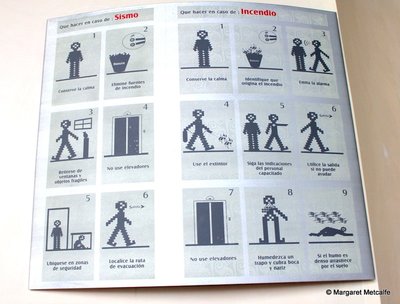 In many places, there are instructions on how to act in the event of an earthquake alongside those for fires 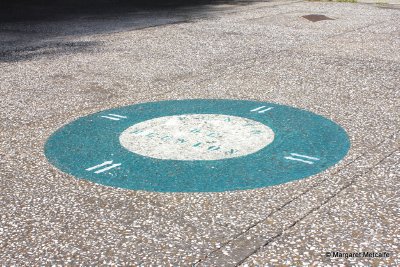 So that was it. I didn't feel scared. It happened too quickly to even register the fact that it was an earthquake until it was over. Just an uncomfortable touch of motion-sickness, believe it or not. We decided to go out for a pizza as planned. The waiters stood around the TV screens, solemly watching the news. It was a 6.5 earthquake with its epicentre in Guerrero, near Acapulco, and had been felt strongly in nine states, including Mexico City. It's hard for us to appreciate, but here in the city, there is a kind of collective fear of earthquakes ever since the devastating one that occured 26 years ago. Although the earth regularly trembles here, sending people into panic and spilling them out on the streets, this was a strong tremor which shook people up and transported them back to that tragedy. In fact, the experts have been predicting that it is very likely that another very strong terremoto will hit the city in the not-so-distant future so residents have that in the back of their mind.

We heard that three people died in the state of Guerrero as a result, but fortunately here in Mexico City, little damage was done. Electricity went off in 30 colonias, a few cracks appeared, there were some water pipes broken but no loss of life.

Nothing like that day 26 years ago when a 8.1-magnitude earthquake, lasting 2 minutes, followed by a second 7.3-magnitude one the following day, destroyed a large part of the city centre and buried thousands. The forces producing the earth movement caused buildings to move 15º from their vertical axis and some turned 20-25º in a SW direction. The government of that time imposed a news blackout, rejected international help at first and later put the official number of deaths at between 5,000 and 10,000. According to other institutions, it was more likely to have been 40,000. To this day, the exact number of deaths is still a mystery. Due to the government's slow response, it was the citizens themselves who dug people out with their own hands and took care of them. Some 30,000 buildings were totally destroyed, and 68,000 partially damaged. Very illustrative is the fact that, while old buildings like the Cathedral and National Palace suffered little damage, many new ones totally collapsed. Corruption was cited as the reason for poor materials and structures. Unfortunately, 13 of the city's hospitals were seriously damaged, causing much loss of life. Yet there were stories of hope. I read that three newborn babies, known as the Miracle Babies, were rescued 7 days after the earthquake. True milagros. 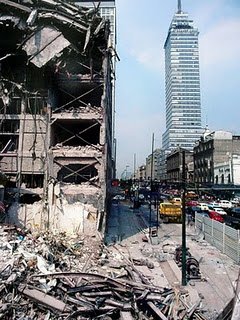 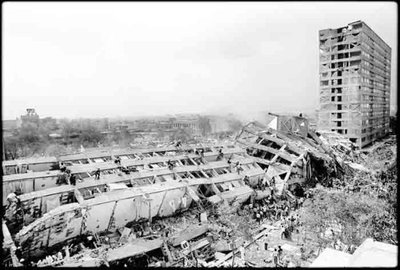 One of the collapsed buildings in Mexico City in 1985

Today, on the site where the Hotel Regis collapsed killing all its occupants, there is a monument in the Plaza de la Solidaridad in memory of those who died in the 1985 tragedy. I found it one day in the Alameda Park while cycling and discovered the story behind it. Today too, a new Alert System has been set up and all schools, like the one Cristina and Marc go to, have regular earthquake simulacros or drills. And of course, every 19th September, the whole of the city has a mega-simulacro de sismo, remembering that tragic day 26 years ago. 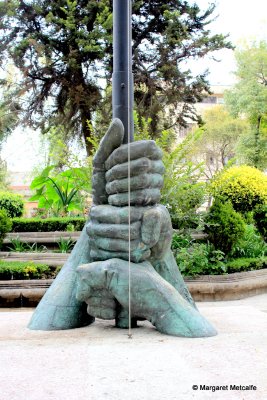 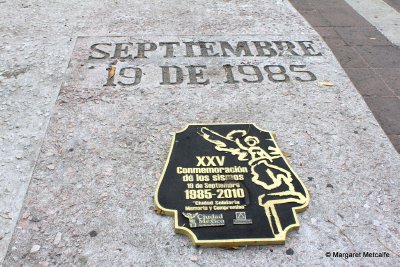 The plaque at the moment

No wonder many people in DF panic and run out into the streets when they feel the earth move strongly underneath them. They lived through the 1985 terremoto and are the survivors of that day.