The long way down - an epic journey 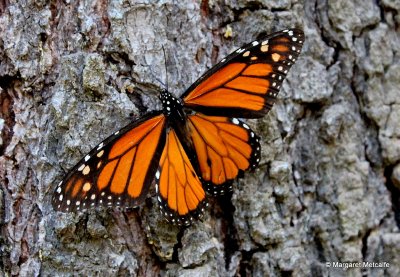 Around this time last year, at the beginning of December, we drove out to the mountains in the state of Michoacán to see some special travellers. They had flown down from Canada and the United States, not on a plane, but amazingly using their tiny fragile wings. An incredible 4500 km which takes them about 2 months. This astounding long-distance journey by the Monarch butterfly (mariposa monarca) is one of nature's truly spectacular feats and defies the imagination. Every year, millions of these beautiful orange and black butterflies fly south down to Mexico, arriving in November, where they spend the winter and reproduce in the oyamel forests of Michoacán and Estado de México, before setting off back to the north in February.

The first time we saw these butterflies fluttering in the woods of Mexico was in February 2009. We had come over to Mexico City to find a place to live and get a general idea of life here. One day we hired a car and set off to Valle de Bravo and as we wound our way through the mountains, we suddenly came across a road sign with a speed limit of 15 kmph. We didn't know it back then but this was mariposa land, and the air was aflutter with delicate orangey smudges glinting where the sun's rays filtered through the thick woods. It was an amazing sight, but perhaps equally incredible was the fact that many of the cars and trucks which minutes earlier had raced past us down the road, recklesssly overtaking on blind corners, suddenly came to an almost complete standstill and crawled solemnly along these protected kilometers. I mean, they took this seriously.

Last year, we decided to go and see where the mariposas monarca spend the winter in their millions, turning trees a dull orange colour. El Rosario Butterfly Sanctuary near Angangueo, about 100 km from Mexico City, looked within driving distance so off we set. As always in Mexico, distances which look so close on a map always turn out to be much further, and trips take much longer than planned because other vehicles on the road move much slower than anticipated and roads can be much more hole-pocked than imagined. Three hours? It seemed more like three days. Finally we arrived at Zitácuaro, and turned up into the mountains. Here the hills and valleys turned greener and more wooded, while the lower slopes had become fiery red with hundreds of thousands of poinsettia plants, known here as nochebuenas, ready to be taken to the cities for Christmas. It was beautiful country. Up we chugged until we almost reached Angangueo, and then followed the signs to El Rosario. This was one trip which seemed to go ON and ON and UP and UP. Passing small poor-looking, wooden houses topped with tin roofs, our car finally came to a halt in a large open space which served as a car park. We got out and stretched our cramped bodies. At last we'd arrived. Or so we thought. Taking to our legs, we climbed up the path squeezed between a long line of simple huts where the local people sold souvenirs and crafts to visitors like us. Since a few years ago when a ban on all logging and slash and burn activity was established, the butterflies are the main source of income for the nearby villages and tourists only visit during a few months. For this poor, quite remote area, it is a godsend to have visitors buy their handiwork. 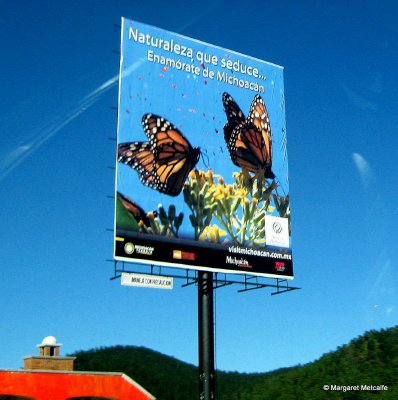 The Monarch butterfly is a symbol of the state of Michoacán 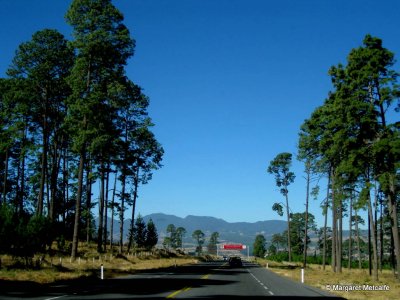 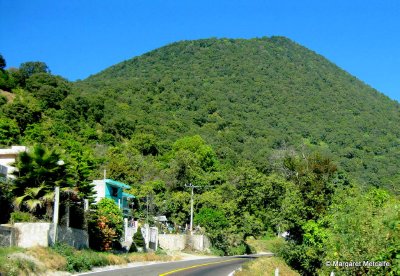 We drove through beautiful wooded countryside 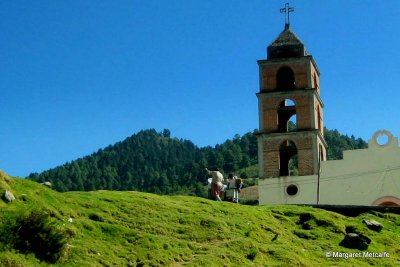 Small church on the mountainside near the Butterfly Sanctuary 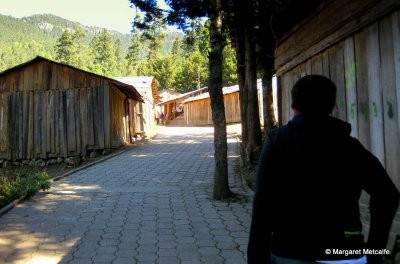 The paved path went between lots of small wooden huts

Just when we thought we should surely be seeing some butterflies, the Sanctuary itself appeared, a small area with an information centre, toilets, a ticket office, and hand-painted murals depicting the life cycle of the monarch butterfly. We were at about 3000m (10,000 ft). A local man was assigned to accompany us up the mountain and off we set. "How long will it take?" we asked. "Hay que caminar media hora o cuarenta minutos", he replied. A thirty or forty minute climb? So we still had a long way to go up. It turned out to be a steep climb straight up the mountainside which challenged our legs and left us gasping for breath. What we didn't know then was that the top of the mountain lies at an altitude of 3400m (11,000 ft). Thankfully, the trail was very well-kept and we had plenty of time to digest the interesting signs giving information about the butterflies. Nature had done its best for us too. We found ourselves immersed in a thick forest of pines and oyomel fir trees, tall and slender, soaring up above us. We couldn't even see their crowns. Light filtered through in patches. It seemed like we were the only ones here. No butterflies either. I was puzzled. 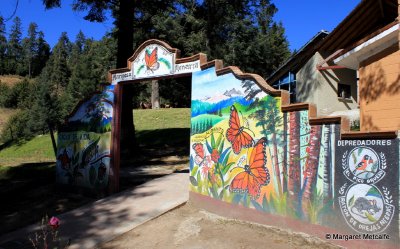 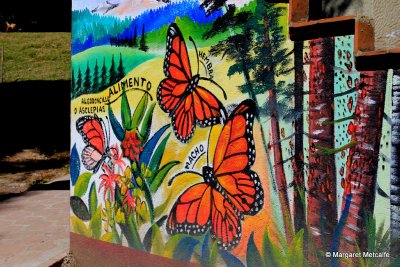 Hand-painted mural of the life cycle of the butterfly 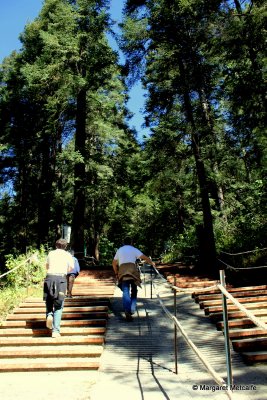 A well-kept trail took us up the mountainside 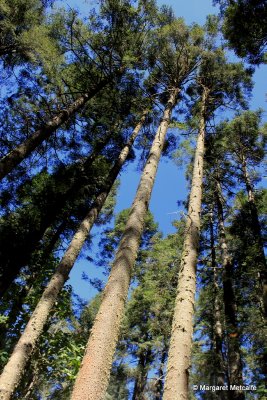 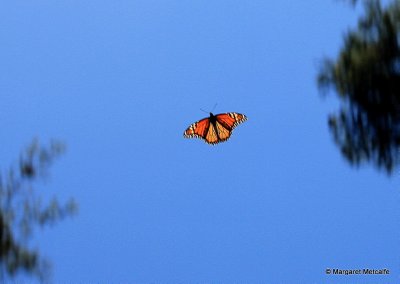 One of the first butterflies we saw

Then suddenly I saw a bright orange flash above me. Sure enough it was a monarch butterfly. So we WERE on course, after all. I was beginning to think we'd come too early, that the butterflies hadn't arrived yet. As we emerged into a sunny clearing on the shoulder of the mountain, the sky was aflutter with these beautiful mariposas. The warmth of the sun had woken them up. About 100 metres below us were a group of people who had just got off some horses. They'd paid for four legs to get them up the steep hill, not a bad idea for those who are not acclimatised to the high altitude. Our guide motioned for us to follow him. "Up again?" Yes, another 10 minutes. We plunged into the forests again and this was when we saw what it was all about. Here at the very top of the mountain was the Mexican destination for millions of monarch butterflies. They were resting on bushes and tree branches, congregating around little trickles of water, fluttering their wings where the sun reached down through the trees. And just where another group of people were whispering excitedly, we could see whole tree trunks and branches looking more like gigantic orangey plumeros or feather dusters as masses of butterflies clung to them. You couldn't even see the leaves and the branches were bending down with the weight. No-one was allowed to go near them and visitors had to keep silent so as not to disturb them. I gasped for breath, but wasn't sure whether it was the effect of the steep climb, the high altitude or because I was overwhelmed by so much natural beauty. Maybe it was a combination of all three. It was definitely one of those magical moments. 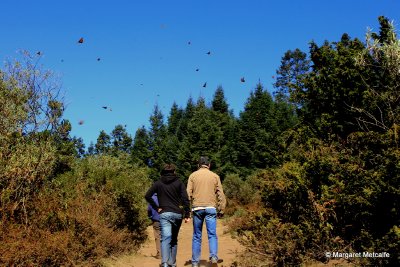 Out in the sunshine 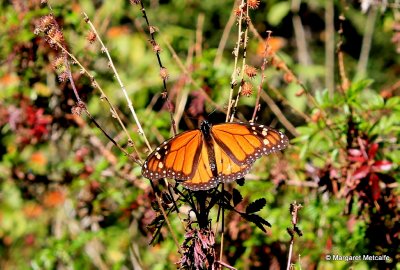 A Monarch butterfly warming up in the sunshine 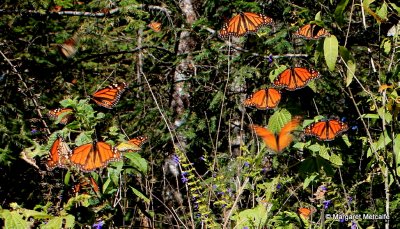 A bush full of monarcas 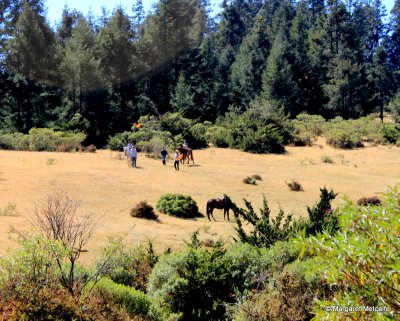 Many people ride up on horses instead of walking - easier on the lungs and legs! 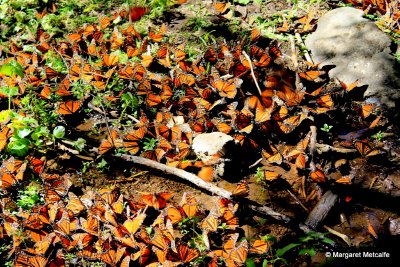 Masses of butterflies congregated near some water 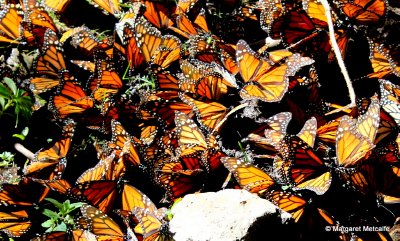 Jostling for a good position near the water! 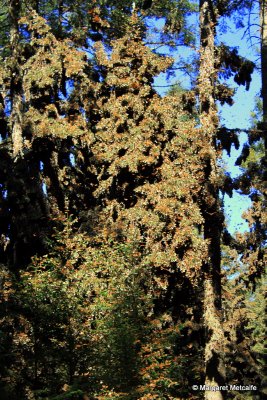 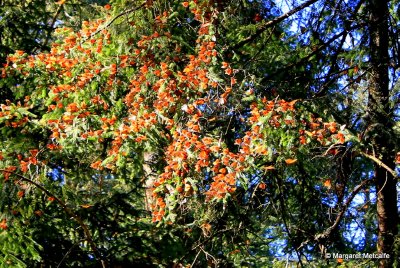 I found myself trying to imagine those small frail creatures, winging their way down from Canada, against the wind, through storms, dodging predators. Fluttering unseen over vast expanses of wilderness, or cultivated fields, through woods. Maybe they passed over the Grand Canyon, or the Rocky Mountains. What a feat! I had read that the average lifespan of Monarch butterflies was about 4 weeks but that the generation which is born at the end of August, also known as the "Methusela Generation", survive for almost 8 months, long enough for them to fly south to Mexico and escape the harsh northern winters. 4500 kms later, they arrive in the oyamel forests where we were standing right then, where their great-great-great grandparents migrated a year earlier. Scientists are still trying to understand how they can find their way down to the same forests, several generations apart. It was all mind-boggling.

I stood in the silence, impressed by the respect shown to these tiny creatures. Keeping quiet, preserving their habitat, driving slowly in areas where the butterflies were flying through. There is a traditional belief in Michoacán that these are the souls of people who have died, coming back home. I tried to imagine what it was like for people living here hundreds of years ago, without all the knowledge we have nowadays and more or less confined to their small villages and mountain valleys, to see millions of these butterflies arriving here every year in the autumn and fluttering off in February. No wonder they gave them a mystical meaning. Yet, even knowing what we do now, that they fly over 4500 kms from Canada and the USA, using a special sophisticated navigation system to help direct them to these forests in Mexico which is transmitted genetically from generation to generation, leaves us equally in awe. 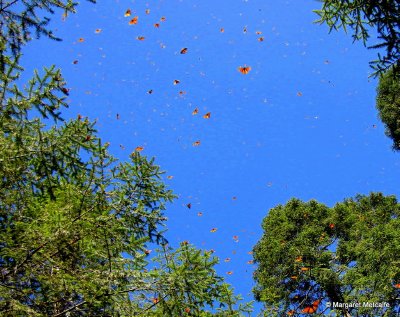 The air was aflutter with the butterflies 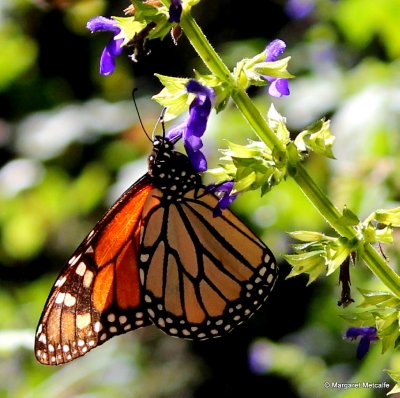 Side view of the Monarch butterfly

It was time to go back down. We skipped down the steep hillside and stopped to buy a few craft items from the women at the bottom. Two young boys ran after us as we looked for our car, singing a couple of songs. They too were trying to earn a few pesos for their families. 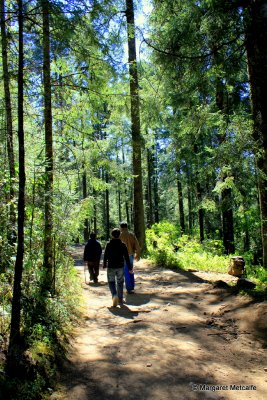 Time to go back down 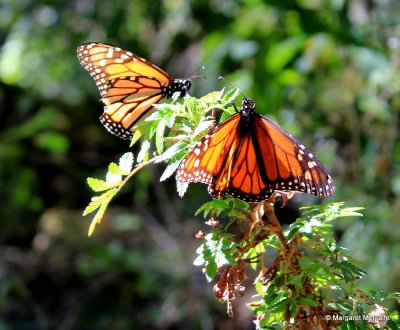 Two butterflies seen on the way down 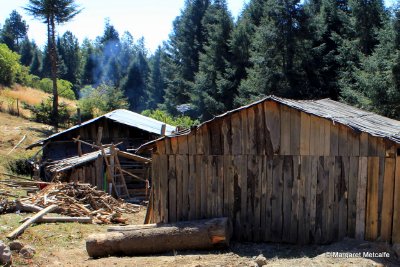 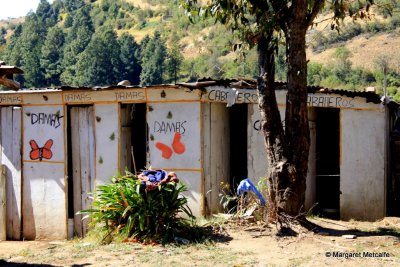 Even the toilets had butterfly motifs on them! 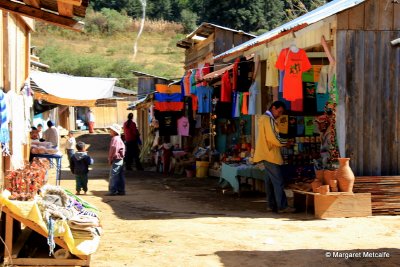 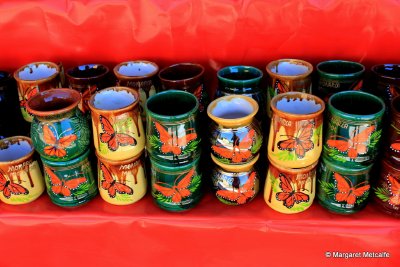 Mugs to remind you of your visit 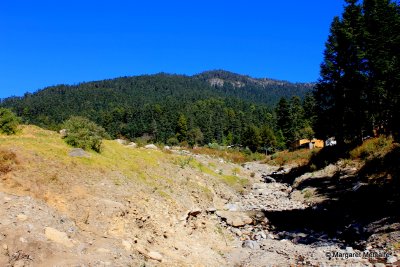 We arrived back in Mexico City, tired, but glad we went. The long hours on the road, the never-ending climbing up, the gasping of our lungs.. it had all been worth it. Definitely a sight not to miss. In fact, this natural phenomenon is so spectacular and important that in 2008 UNESCO declared the Monarch Butterfly Biosphere Reserve in Central Mexico a World Heritage Site and helps protect the overwintering site of these tiny travellers.

Cristina hadn't come with us since she was staying overnight with a friend and we tried to tell her what she missed. It was lost on her since she views butterflies in the same category as wasps and spiders, and shuddered at the thought of being so close to millions of insects. Still, for most people it is a visit to make at least once in their lifetime, if the opportunity arises. You won't be disappointed.