'Tis the season for driving madness 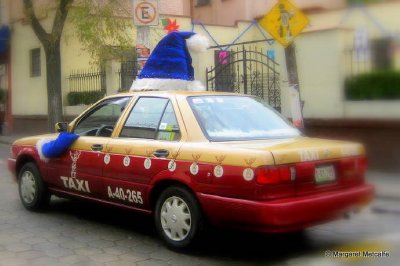 Just about everywhere, December is known as the season of goodwill and brings generous quantities of Christmas spirit.... except, it seems, to the roads of Mexico City. Here it marks the beginning of a time of increased road misery which multiplies drastically as shopping centres and markets fill up with glittering wares to lure consumers out, local authorities decide to undertake major road works, and millions of travellers battle to get through chaotic bottlenecks and traffic jams on their way to and from work, school, home or the shops. Driving, an all-out fight to survive at the best of times, becomes twice as hazardous at this time of year and is guaranteed to fray the nerves of even the most seasoned driver. I say "driving" but sometimes I wonder if this really is the correct word. "Bulldozing" is probably a better one. Other words that readily come to my mind are "slicing", "steamrolling", "shoving", "squeezing", "pursuing" and a host more. Not much peace and goodwill at all. 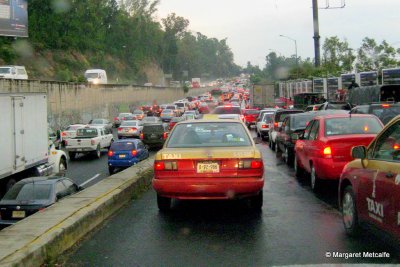 Huge bottleneck on the way down from Santa Fe 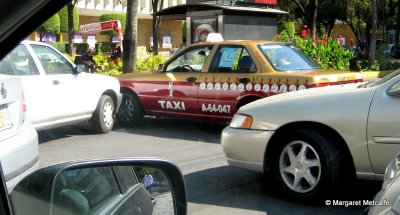 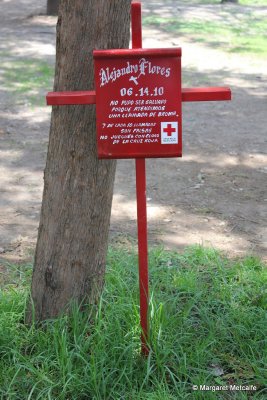 Actually, having lived in DF for over two years, I think I've finally cracked one of the greatest mysteries in the universe. I mean, let's be honest... are there any Rules of the Road in Mexico City? Does the Highway Code exist in this teeming metropolis? If so, where do you find out about it? If not, how do you know how to drive?

These questions and many more like them have been bothering me ever since I arrived in Mexico. I can now say that, after driving more than 20,000 kms in the city and covering many more as a passenger in other vehicles, I think I've finally cleared up this mystery. If there is a Highway Code, no-one has seen it. So in the absence of any written rules, I've decided to enlighten road users on the subject of good Mexican driving practices. According to my observations and experience, these seem to be the main rules:

RULES FOR DRIVING IN MEXICO CITY

1. To become a legal driver, you need to buy a driving licence for 605 pesos, which you do by showing some ID and having a photo taken. Don't worry, no test is necessary and no questions will be asked as to whether you know how to drive.

2. The Rules of the Road can be summed up in four small words: DO WHAT YOU WANT. 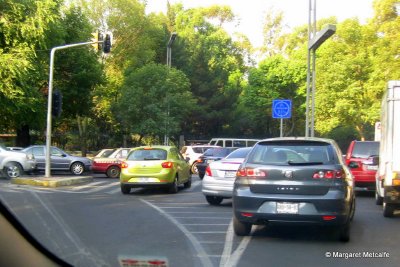 Chaos - everyone going where they want

3. In the interests of your own safety, you should ALWAYS, without fail, give way to BIGGER vehicles and PUSHIER drivers. These include, especially, PESEROS (small green and white buses falling apart and driven like bumper cars), MICROBUSES, school buses, trucks and shiny black cars with tinted windows driven by guardaespaldas or bodyguards. It doesn't matter who is in the right. This is absolutely essential for your survival. 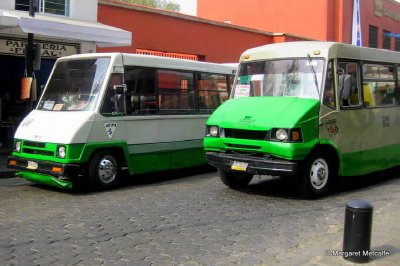 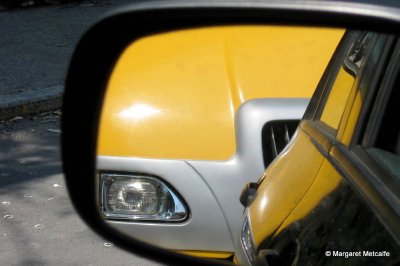 A school bus gets a bit too close for comfort 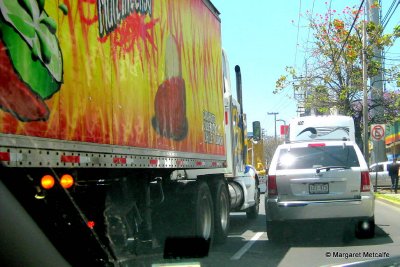 Keep away from big trucks

4. Traffic lights and other signals are useful recommendations. If you need to get somewhere quickly or keep the flow of traffic going, ignore them. Red lights should only be obeyed when there is absolutely no possibility of doing anything else. 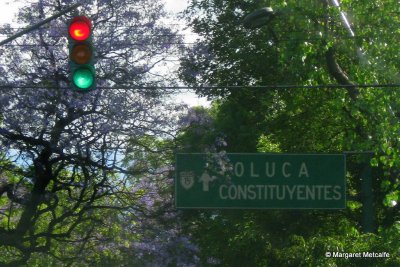 Road sign saying you have to come to a complete halt when the light is red!

5. You should avoid using indicators if at all possible. Signalling your intention to other drivers will result in them trying to take advantage of you or preventing you from carrying out your desired manoeuvre. If you really want to use them, do as the bus drivers do and confuse other road users by putting the left indicator on when turning right or coming to a standstill.

6. Emergency hazard lights (all four indicators flashing at the same time) are for those occasions when you want to stop dead in the middle of fast-moving traffic (follow the clear example of taxi drivers) or wish to park for an indefinite period of time in rather busy lanes.

7. You must learn the SUDDEN LANE SWITCH manoeuvre as soon as you can since it will be extremely useful and is one of the most frequently used turns. This consists of waiting till the last minute and then without any warning or indication, changing lanes using a very quick, diagonal move. If you can do this across three or four lanes, the effect is much more spectacular.

8. Roundabouts are key components of traffic jams. In general, you should go around them in an anti-clockwise direction although there are some special ones which allow you to go either way around. The general idea is to take up your position and contribute to a total interlocking system whereby no-one can move. When circumstances require, or where there is very heavy traffic, just drive the wrong way around to get to your turn-off more quickly. If you are not sure how this manoeuvre works, observe police cars carefully and follow suit. 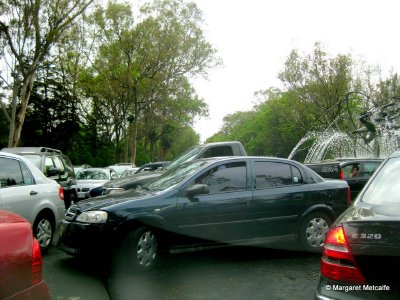 Total chaos at a roundabout - the fountain is in the middle!

9. When joining a major road from the side, pull out directly into the oncoming traffic, preferably without looking. Other road users will make the appropriate adjustments to accommodate your joining.

10. Any empty space at junctions should be filled. Move into the space as quickly as you can, even if it means blocking the way for others, and stay there until the light turns green again for you. Ignore horns or glares. 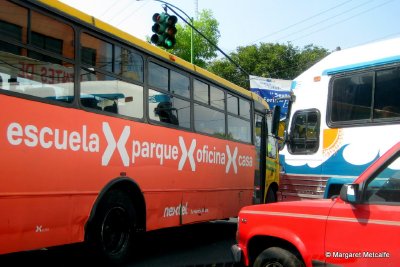 No moving for anyone! 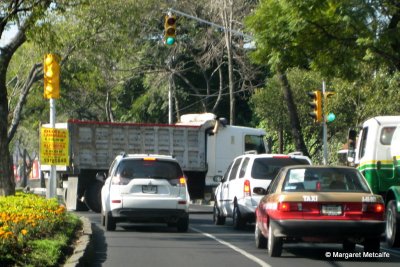 11. Waiting in line patiently is for drivers who have lots of time. If you are in a hurry or don't want to wait, you can jump the queue and butt in. This helps keep the traffic moving. If you have to drive the wrong way down a one-way street or down the opposite side of the road, do it quickly. 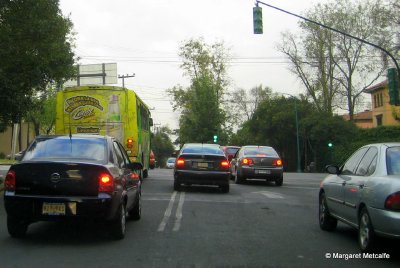 12. Never engage eye contact with other drivers since they may be rather annoyed at you pushing in front of them or blocking their way.

13. Look ahead at all times. Avoid getting distracted by looking behind or to the side.

14. When everything else fails to help you advance or jump the queue, just open your window and stick your hand out and wave it up and down energetically. This should work because if someone injures you, they will have to pay for the hospital fees.

15. Police cars have a cruising speed of 20 kmph at normal times and always have their lights flashing. If you see them behind you with flashing lights, it does not mean they have caught you doing something wrong. They just want to be seen and cause nearby drivers to have epileptic fits, especially in a traffic jam. If there is an emergency, or sometimes just to get through solid traffic, they will use their sirens. 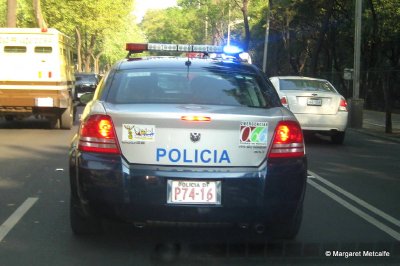 Police car with flashing lights cruising along at 20 kmph.


16. If you are stopped by a policeman, make sure you have two surnames as it will make things much quicker. If not, they have to decide what to put in the second space on the traffic fine and that can take a while to work out.

17. Park at your own risk. The city's gruas or tow-trucks will remove you from anywhere within seconds, even if you are in the right. It will then take you many hours and a hefty fine to reunite you with your car. Police cars, however, can park anywhere they want without any unpleasant consequences, especially if they need to have breakfast or consult their cell phones. 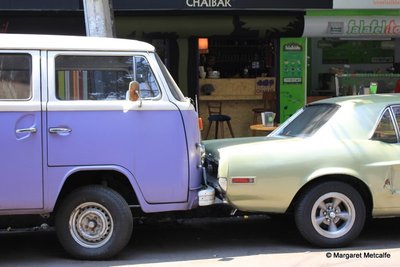 Parking close to stop the tow-truck taking them away?

18. Lanes are often very narrow. You should learn as soon as possible to drive quickly using a weaving movement to avoid hitting other cars' mirrors or other parts of large vehicles. The faster you go, the more exciting it is. The primary role of side mirrors is to make sure other vehicles keep a certain distance and do not scratch your car. Secondary uses include putting on make-up, plucking eyebrows, and checking hair. 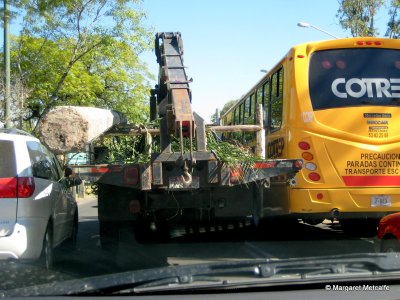 A tight squeeze along Reforma 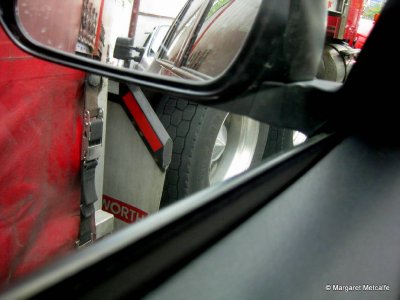 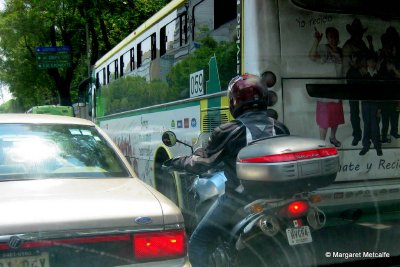 A motorbike trying to squeeze between a bus and a car 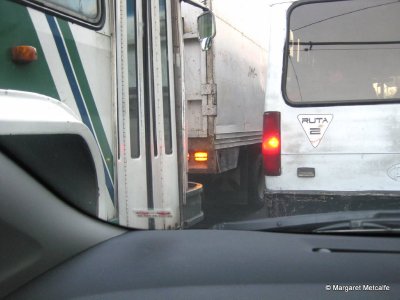 Completely hemmed in by buses and trucks

19. When there are three or more lanes going in the same direction, you should stay in the middle lane, regardless of your speed, where you will feel safer. Overtaking can take place on either side.

20. When driving in dark conditions, it isn't compulsory to put on your headlights, even though they are in working order. You will save your battery and other road users will not be able to anticipate what you are going to do.

21. Vehicles should be kept reasonably well-maintained from a mechanical point of view. Try not to drive with items falling off or dragging along the ground since this may attract the attention of the police. Ensure that cracked windscreens and broken windscreen wipers do not totally impair your view of the road ahead. 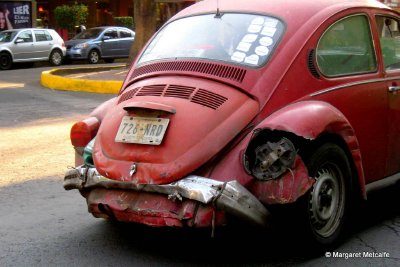 A VW Beetle missing a few bits and pieces

22. Using cell phones while driving is prohibited but since everyone does it, you should make sure your calls are not too long. Texting while driving requires more practice.

23. Drivers should be attentive to any modifications to the surface, layout or work being carried out on the roads. Gaping holes, missing manhole covers, broken drains, road works and unscheduled changes in the use of specific roads may not be duly signalled so you have been warned. 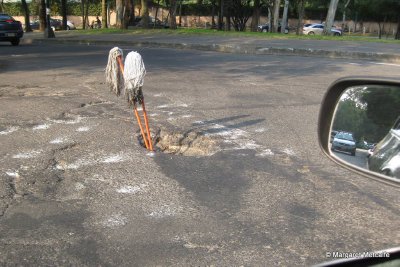 A couple of mops to warn motorists 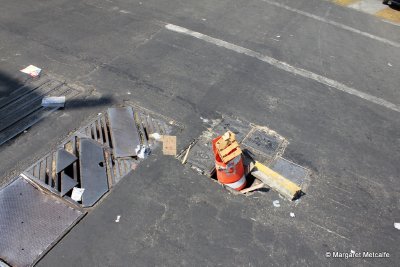 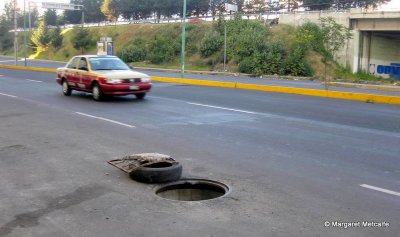 At least they put a tyre there! 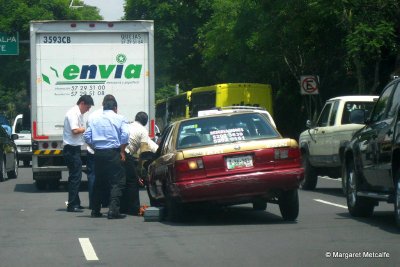 A taxi with a wheel wedged down an unmarked gaping manhole!

24. Speed bumps (also known as "sleeping policemen") have been placed on most roads to promote road safety by slowing vehicles down. Some are marked and others are camouflaged. If you want your car suspension to last for at least 4 months, it is recommended that you learn where they are.

25. Signs informing motorists about the speed limit are non-existent since drivers pay no attention to them anyway.

I hope these rules will be of use to anyone planning on getting behind a steering wheel in Mexico City. In the unlikely case that an official Highway Code or Reglamento de Circulación does exist, it must be buried deep under a towering mound of bureaucracy, waiting to be discovered like ancient Aztec treasure. Given that there are still about three weeks until Christmas, the DF authorities could consider organising an archival dig to unearth it and a copy could be wrapped up and given to every household as a Christmas present. A case of spreading some goodwill, good sense and good driving practices. 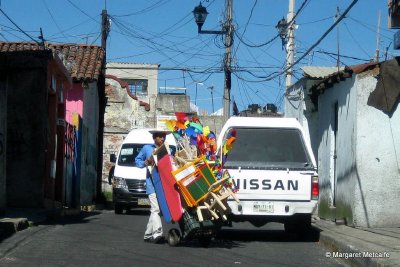 An assortment of road users 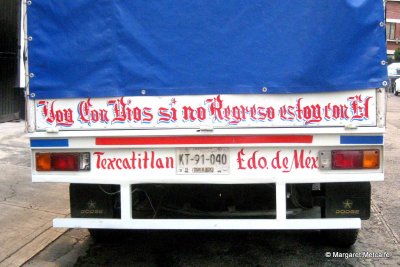 Sign seen on a truck sums the attitude up well - "May God go with me, and if I don't return, I've gone to be with Him!"

That was an interesting an funny read!

Thanks, Jarl. It's an adventure driving here!