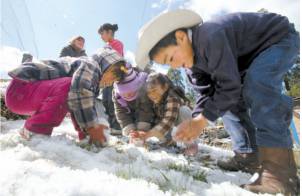 Kids playing in the snow in the Ajusco area, close to Mexico City (Photo: Jorge Alvarado)

Winter has made an early entrance.... Despite it still being November, Cold Front Nº 15 sent temperatures plummeting to below zero yesterday and today. Contrary to what many people think, winter can be very cold in Mexico. Ask the people who live in the State of Durango, further north in Mexico. Yesterday they suffered temperatures of -22 °C in a place called Santa Bárbara and -18º in Guanacevi. In Zacatecas they reached -13 °C. 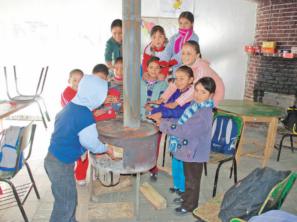 Kids warming up at school in Guanacevi in temperatures of -18 °C (Photo: Rosa Esperanza Gaucín)

Although here in Mexico City the cold has been more moderate, temperatures have dropped to below zero and snow fell yesterday in the Ajusco region. The volcanoes around the city have turned white too. Brrrrr... we got out our jumpers and scarves and gloves to walk to catch the school bus this morning at 6.30 am. As I walked Ozzy, I passed the two guards who stand outside a house in Reforma. They were stamping their feet. They greeted me with a cheerful, "¿Cómo estás?" and I commented something about the cold. What about them? They spent all night sitting in the car, freezing. It reminded me of those cold winters in England. Yet at midday, temperatures soared to 20 °C. Just to warm us up a bit. 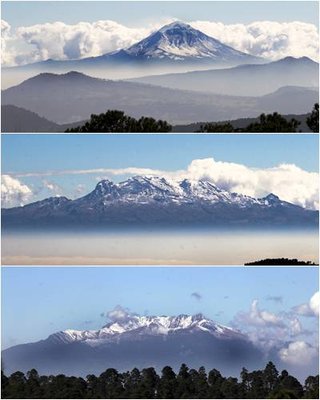 Griselda came down from Cuajimalpa today wearing several thick jumpers. Actually, she lives even further out, on the way to La Marquesa, alone with her four children. She said it was freezing up there. Their small rented place has no heating and frost and ice are quite common. According to her, this year and last year the cold weather came much earlier than usual. We sat and warmed ourselves up with steaming cups of tea and coffee. She thinks it's quite warm down here. I can't imagine what it's like for so many people like her.

How thankful I am for warm clothing, heating and hot water. Yes, even in Mexico it gets cold. 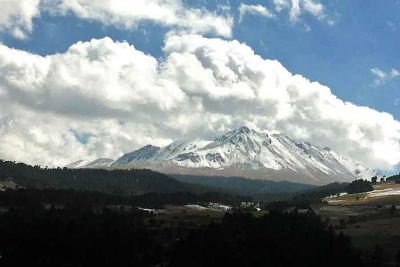