Feathers, mantras and vibes in the park

Yesterday the woods of Chapultepec were abuzz with vibrations. I discovered they came from a couple of events I had no idea were going to happen there. 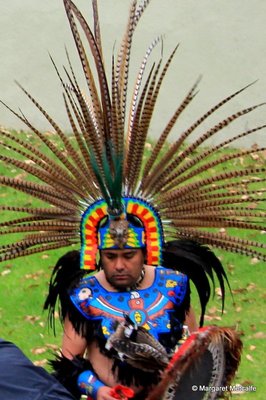 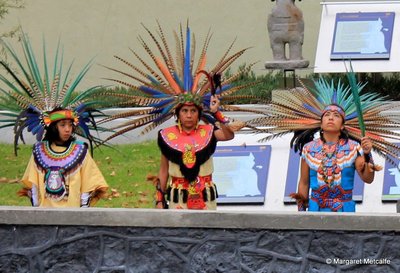 I stumbled on the first one just after I started my early morning cycle ride in Chapultepec Park. An insistent throbbing of drums sent the low-frequency wavelength receptors of my eardrums vibrating. A bit further on, the distinctive smell of incense, wafting in white wisps in the air, began to tickle my nose and clog up my throat. Following the drum beats and aromas, I found they were coming from Los Baños de Moctezuma. Although they are called Moctezuma's Baths, they were actually built in the 15th Century by a rather interesting ruler-poet-architect-designer-warrior with an intimidating-looking name to prounounce, Nezahualcoyotl, who was as well known for his poetry as for his aqueducts and water systems. Apparently, the Aztec emperor Moctezuma enjoyed swimming in this pool, hence the name. Recently, the pool has been restored but kept waterless. Shame.

Anyway, curiosity got the better of me and I decided to investigate. I wasn't the only one. A Mexican cyclist, an older man on a rather rickety contraption, motioned excitedly for me to bring my bike up to where he was. I got off and carried it up some steps and looked down over the low wall. There, congregated around the dry pool was a group of people, some of whom were dressed as Aztec dancers, sporting visually impressive headdresses with long feathers. Others were in robes. "Es un ritual Azteca muy antiguo", the cyclist informed me. An ancient Aztec ritual. "What is it called?" I asked him. He shook his head and said he didn't know the name. 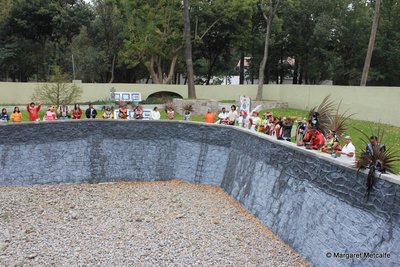 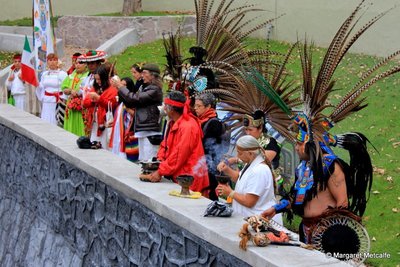 Many were wearing feather headdresses and robes

By now the participants had encircled the Baños de Moctezuma and had fallen silent as one of the men began to speak. "Gracias por venir. Estamos aqui para celebrar el ritual de ...". He was thanking them for coming to celebrate this ritual. I couldn't quite hear the name but I'm sure it began with an "X" like so many Mexican names around here. "Es un ritual Azteca muy antiguo...", one they have been celebrating for over 1200 years (or maybe it was 1500 years... I couldn't quite catch the number either). At this point, the Mexican cyclist picked up his bicycle, and pushed it down into the enclosure, propping it up by the gate. He beckoned me to do the same. Seeing his enthusiasm, I could hardly refuse.

The ceremonial leader continued talking about fuego (fire) and paz (peace) and some other things. He thanked the abuelo and abuela (the old man and woman standing nearby) for coming and representing the elders with their wisdom and knowledge. Then it was time to blow the conchas or large seashells. Anyone who had a musical instrument also began playing. Plaintive notes emerged from a flute, whistles blew out different animal sounds, a long stick with seeds inside rushed like a waterfall, and of course, a series of drums provided a background rhythm. Those who had small bowls with incense stoked the embers, releasing clouds of white smoke, and held them up. 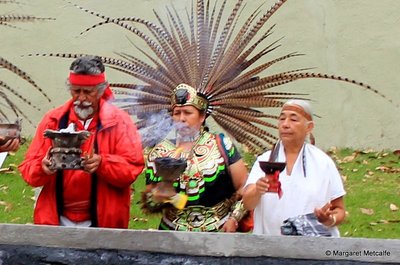 The abuelo and abuela 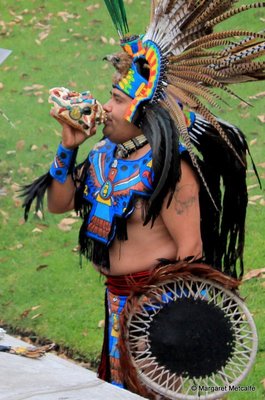 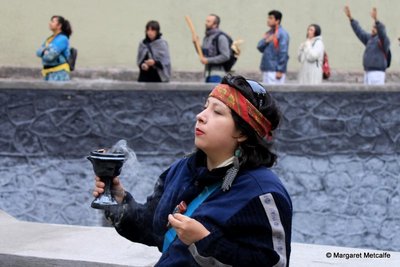 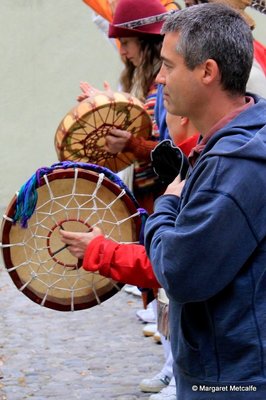 I watched on, fascinated by this unusual group. Some were obviously Mexican, others seemed to be New Age participants tagging along, and there were also a few normally-attired people. The ritual involved raising their hands and incense burners in the four directions and chanting something. Then from the opposite side of the pool a very loud, life-like jaguar growl caught me unawares and I looked around, half-expecting a wild spotted feline creature to appear out of the woods. The jaguar has long been a symbol of power and strength in pre-Hispanic cultures and, in Aztec civilisations, represents rulers and warriors. Next they repeated the action looking towards heaven and then bowed down towards the earth. When the ritual had finished, the abuela led the group out of the Baños de Moctezuma and I watched as they wound their way through the trees, accoumpanied by the very deep boom of a huge drum which one man carried on his shoulder. A second man walked behind with the drumsticks, beating rhythmically. A group of four or five young Aztec dancers with seed pods shaking around their ankles followed on solemnly while a youngster carried a banner proclaiming they were the Dancers of Teotihuacán. 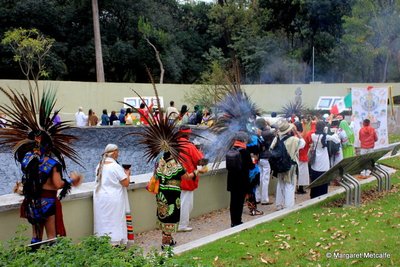 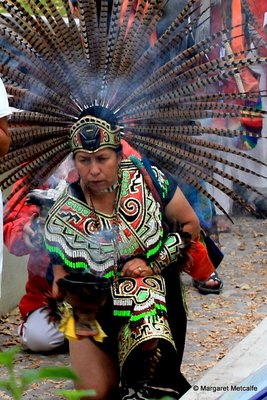 Bowing down to the ground 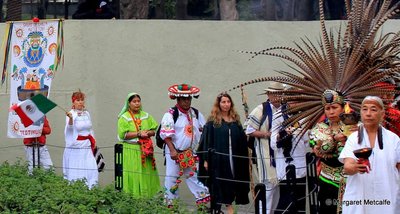 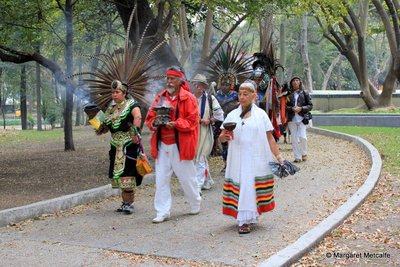 Striding off into the park 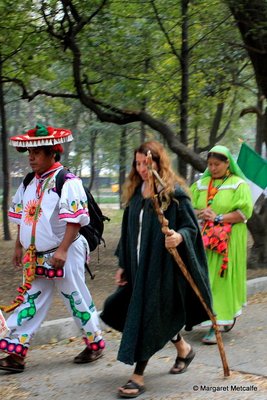 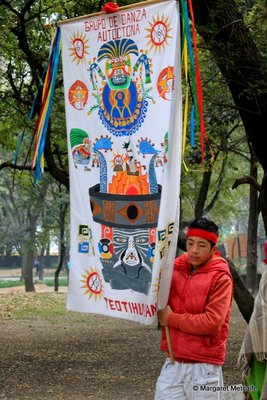 Banner of the Teotihuacán dancers 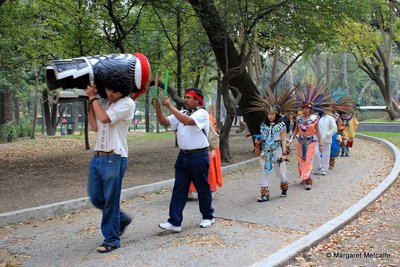 Drum carried on shoulder with the man beating it from behind

Off I cycled to the other end of the park and this time was intrigued to hear strains of a musical mantra being loud-speakered out to the whole park. At the Fuente de Nezahualcoyotl, I came across "Xicome, la primera festival de musica sanadora" (the 1st Festival of Healing Music). Enveloped in more incense, gurus, spiritual leaders, yoga practisers, New Age participants... sat on mats in front of the giant statue of Nezahualcoyotl, and with one hand held up, eyes closed, scarves over their heads, were singing a slow mantra of eight notes, hundreds of times over. In fact, over an hour later, I could still hear the same song being broadcast to the four corners of the park and outside. Three television cameras were set up, as were offerings and incense. One of the workers came over to me and gave me a leaflet and invited me to take part in their workshops and other activities. They were here to bring peace and light to Mexico, and experience harmony with Mother Earth and nature. 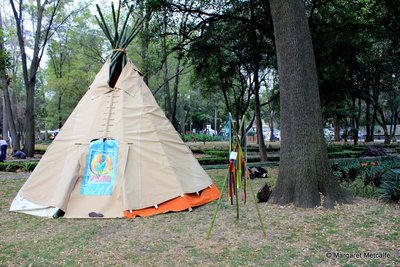 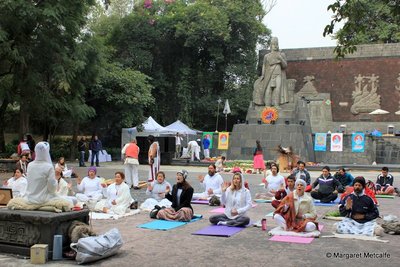 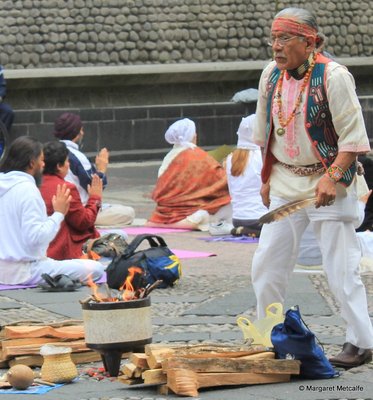 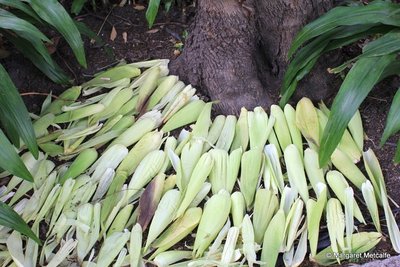 Corn cobs spread out at the base of a tree 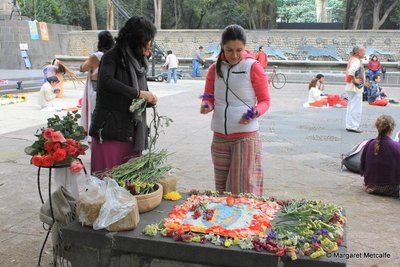 Decorating an altar to the Virgen de Guadalupe

After sitting on the edge of the fountain for a while, I left in search of my own peace and quiet. I stopped in the middle of the woods, propped my bike up against a tree and soon my friends, the squirrels, came scampering over to me. This time I'd remembered to bring them some small nuts and I was soon surrounded by a group of small, twitching creatures who darted around me, scrabbled up and down the trees and chattered away in their squirrel language of tackatackatacka. One in particular became very bold and, taking a nut from my hand, sat on my leg, crunching it. Others investigated my bike and did acrobatics along the handlebars. Now THIS is peace and harmony with nature, I thought to myself. 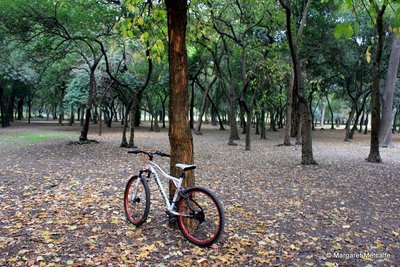 My bicycle in the middle of the wood 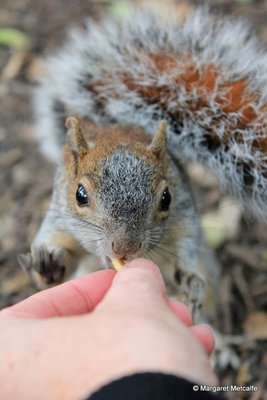 A squirrel taking a nut from my hand 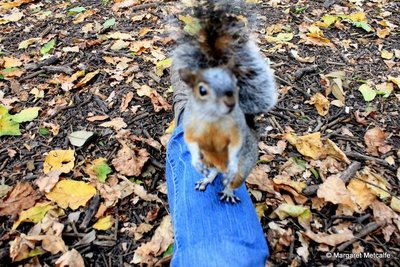 Friendly squirrel sitting on my leg 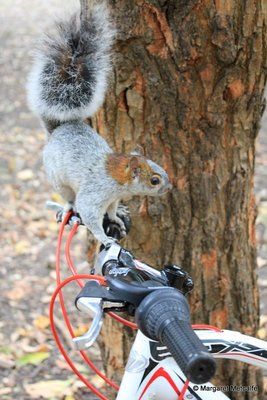 A curious squirrel checking out my bicycle

Just then, the ceremonial ritual group passed along the nearby path, piping and drumming and incensing the trees, the woods and nature. The squirrels stopped dead in their tracks for a minute, then scampered up the trees for a better viewpoint. The spell had been broken. I realised it was time to get going. 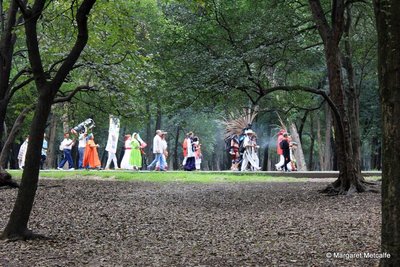 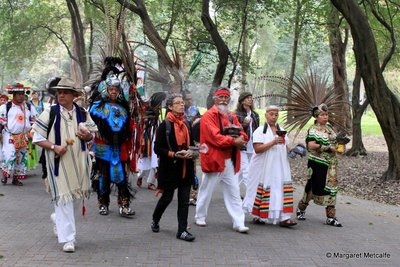 Walking through the park 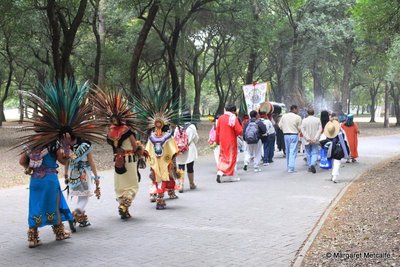 Making their way around Chapultepec

I cycled back to Polanco, thinking about what I'd seen that morning. I don't know about the others but I'd definitely felt some good vibes and peace while playing with the squirrels in their habitat.