The rustle of autumn 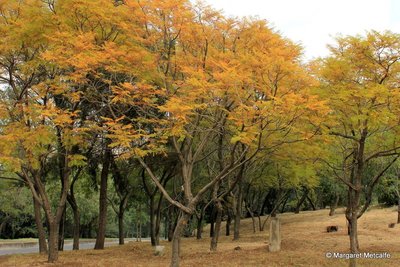 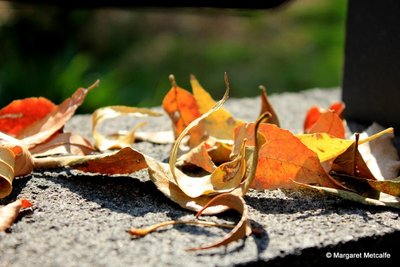 Autumn has arrived in Mexico City. You can see it, hear it, smell it. The Master Artist has got out his palette again, like every year, and has started adding touches of gold and copper and, in places, a few brushstrokes of fiery red to the normally homogenous green foliage. The dull concrete pavements have become mosaics, with leaf-patterned carpets.

Early Saturday morning I clearly saw otoño, heard it, smelled it, felt it as I cycled through the woods in Chapultepec. Russet-coloured carpets had been rolled out under the trees. Park benches sat ankle deep in drifts of fallen leaves. One by one, or in twos and threes, tired leaves tumbled and twirled silently down from above me, unable to cling to the branches any longer. It felt like an autumnal snowfall, with leaves instead of flakes. They joined the crisp, crinkly rug under my wheels, producing a crackling soundtrack to my ride. Small squirrels scampered around collecting nuts and berries, just in case no-one feeds them this winter, highly improbable with the sheer number of visitors to the park, but they don't know that. Autumn fruit dangled and gleamed on trees and bushes, shiny blue and red. I half expected to smell wood fires and roast chestnuts. Yes, autumn is here. 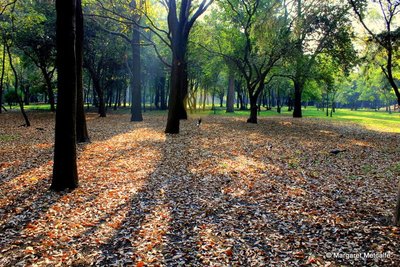 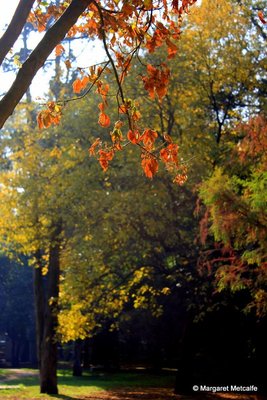 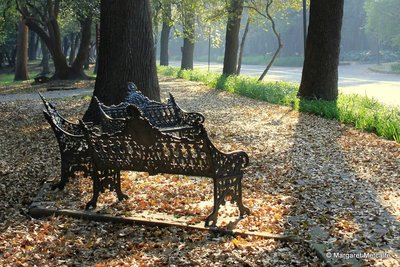 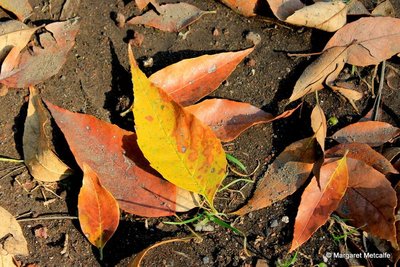 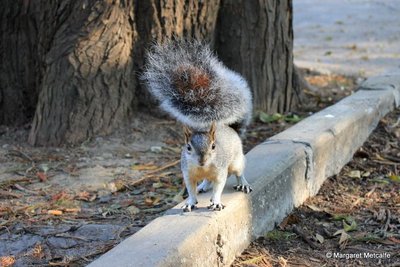 A squirrel out foraging for food 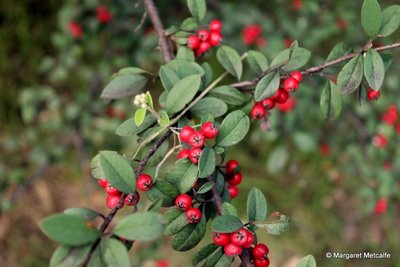 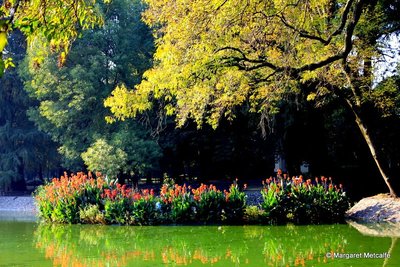 Early morning by one of the lakes in Chapultepec Park 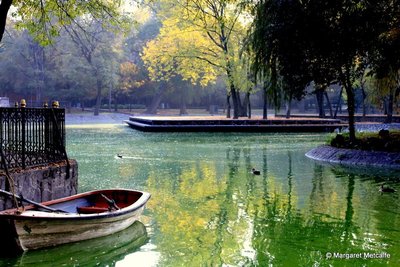 Boat on the lake 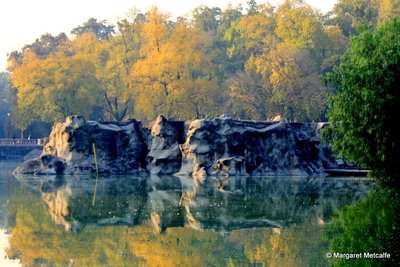 Reflection of trees and rocks in lake 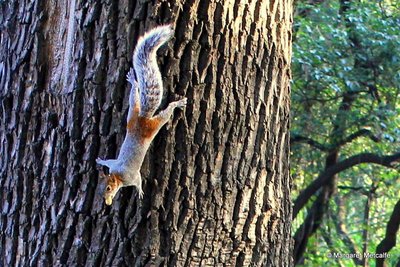 A squirrel with a nut in its mouth 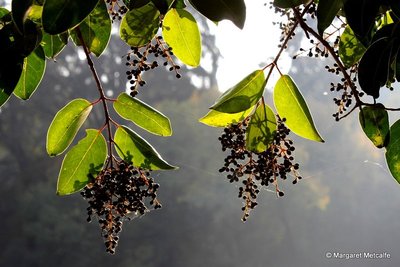 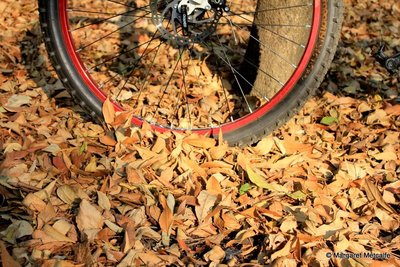 There's a crisp chill in the early mornings that wasn't there before. My breath emerges like a whitened ghost, or maybe it's Jack Frost who's been in hiding since last year. As I cycle through the clumps of trees, my eye is drawn to the sight of a few golden leaves still dangling from almost bare branches. They catch a ray of sunlight and look like tear-shaped drops of amber, about to drip down on the ground. The needles on the huge ahuehuetes or Montezuma cypresses, whose crowns disappear far above me, are changing colour before my eyes. It's a lovely time to be out, enjoying nature's display in the heart of this city. I'm grateful that even chilangos, residents of Mexico City, can appreciate the changing seasons around them. 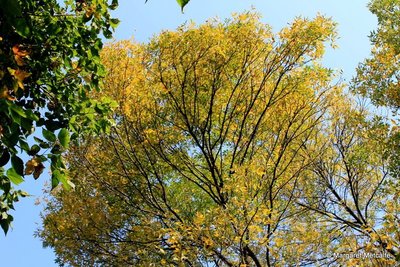 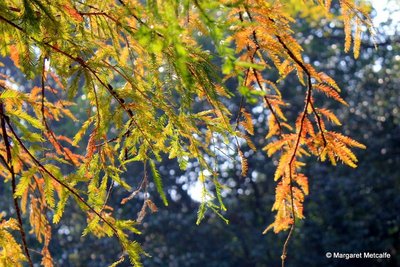 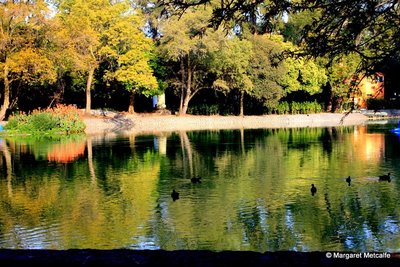 One of the lakes in Chapultepec Park 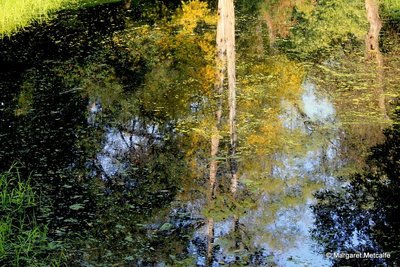 Reflection of tree in water 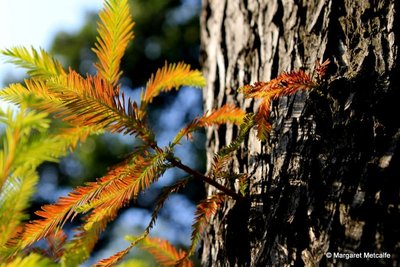 Coloured needles of the Montezuma cypress 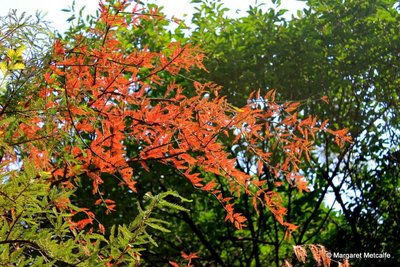 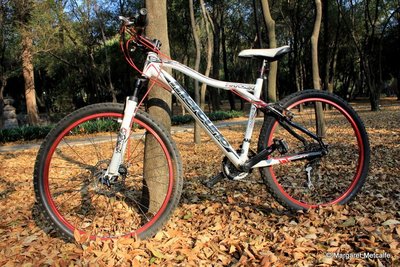 Elsewhere, the sound of pavements being swept accompanies autumnal days. Swish, swish, swish. Some streets are swept clean, probably several times a day. The leaves barely get a chance to land when they are whisked off and packed down in bags. In other streets, drifts of dry leaves clog up under cars and crumble when you walk over them on the paving. A good autumnal wind is rare but the other day, it blew and dumped centimetres of crispy hojas secas everywhere. A downpour stripped the trees a little more. Now in the mornings woolly hats and gloves are sometimes seen. Although it warms up during the day, this city sprawls in a high-altitude basin and early morning hours at 2300 m (7500 ft) can be chilly. Ten days ago, temperatures sunk to 2 °C (36 °F). 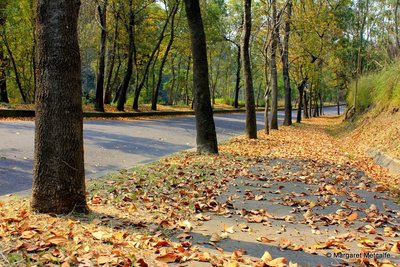 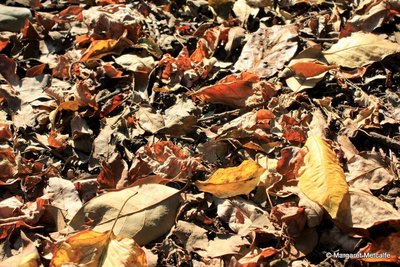 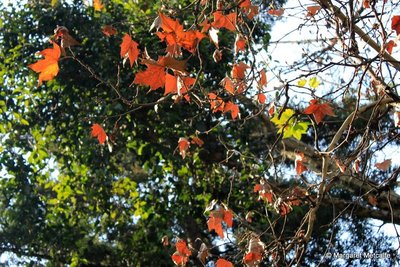 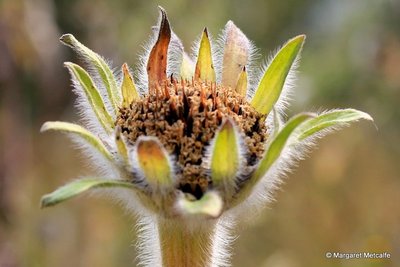 Yes, autumn is definitely here. The Mexican pear tree in our back garden is beginning its transformation from green to bright red and orange and the street outside is carpeted with weary leaves. Even Mexico City gets a colourful face-lift for a few short weeks. 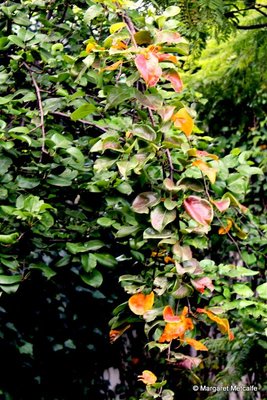