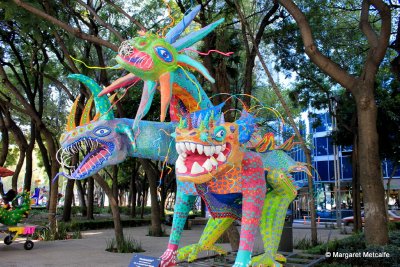 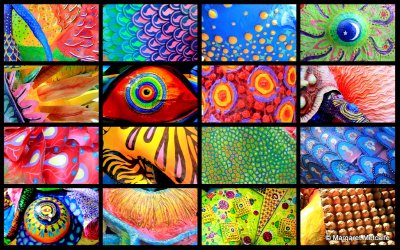 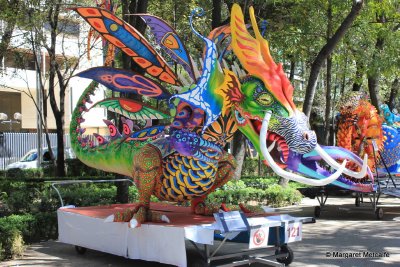 Every year, towards the end of October, Mexico City is invaded by hundreds of strange-looking gigantic monsters. They come out of hiding to gather together in the Zócalo and then march down to Paseo de la Reforma. You can find them camped out between the Fuente a la Diana Cazadora and El Ángel de la Independencia, a mass of brightly-coloured beasts rubbing shoulders with each other and sparking off flashes (camera flashes, of course). These creatures can only be described as a wild mix of imagination, creativity and fluorescent colours, and seem to have been inspired by equal doses of fantasy-filled dreams and terrifying nightmares. Some may look pretty fearsome and spooky, especially to the smallest members of the public gazing at them. Thank goodness, they are all just made of papier mâché, cardboard, kilos of paint and weeks of hard work.

This year's 5th Monumental Alebrije Parade, organised by the MAP (Museo de Arte Popular), took place last Saturday. After weeks and months of trabajo duro, artists from all around the city, including professional craftsmen, schools, associations and families, put the finishing touches to their alebrijes and they were transported to the Zócalo. I saw them being taken on large trucks and being parked there on my early morning bike ride. Later that day, a long parade of eye-catching creatures snaked their way around the centre, ending up in Paseo de la Reforma where they have been left on show for thousands of people to see and marvel at over the next few days.

Alebrijes originated in Mexico City in 1936 when a Mexican artisan called Pedro Linares began making the strange, wild-looking creatures he'd seen in a feverish dream while sick. He re-created them, using cardboard and papier mâché, and painted them in bright colours and designs. The name alebrijes comes from the word he kept hearing in his hallucinations. Gradually the craft spread to other parts of Mexico, in particular Oaxaca, where they started carving and painting small, fantasy-inspired animal figures in wood. Nowadays, you can buy small examples of this popular Mexican craft in shops everywhere. 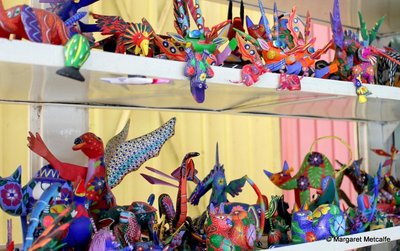 Small alebrijes for sale in a craft shop

No two of the tiny alebrijes are the same. Neither are the gigantic Alebrijes being exhibited in Reforma, which this year number around 200. Each one has a unique design and has been painstakingly painted and decorated at the whim of the artist or artists. Creatures with wings, scales, claws, spikes, fangs, spots, suckers, feathers, horns, tongues, tails, and all kinds of appendages have once again come together at their annual parade. An amazing display of imagination-run-wild, creativity and talent..... and true works of art, Mexican-style. 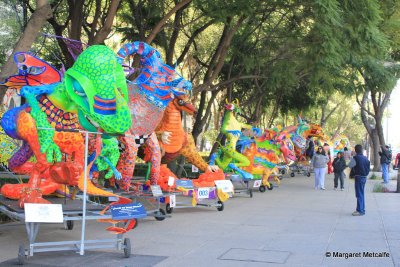 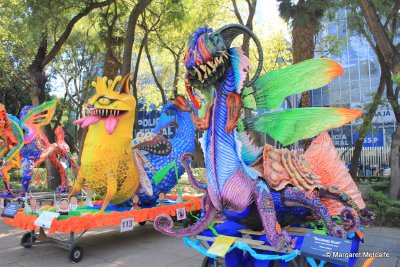 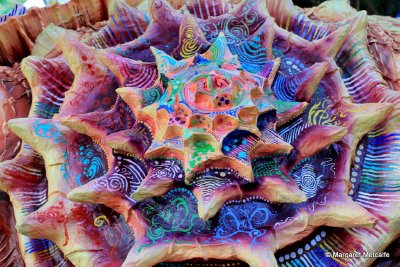 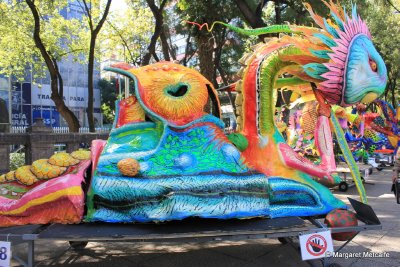 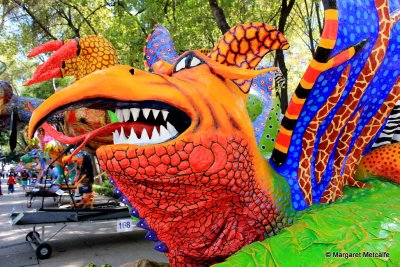 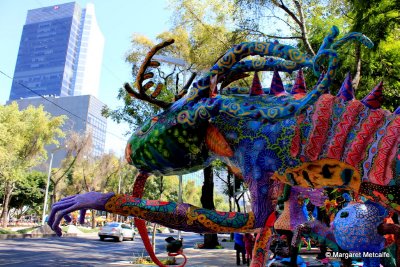 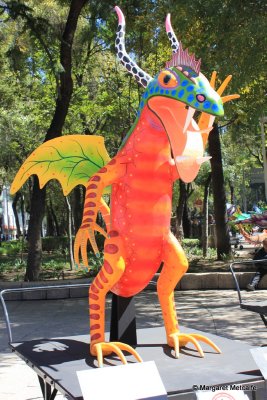 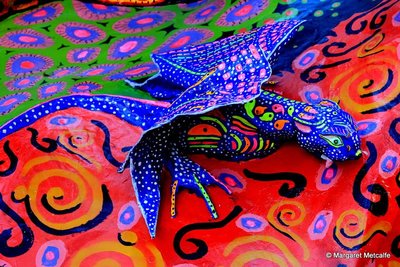 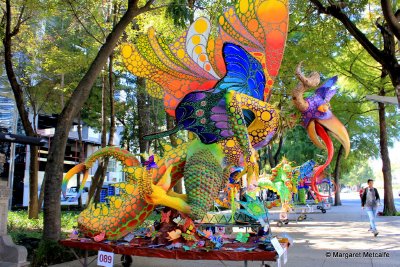 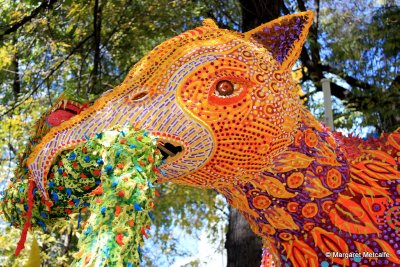 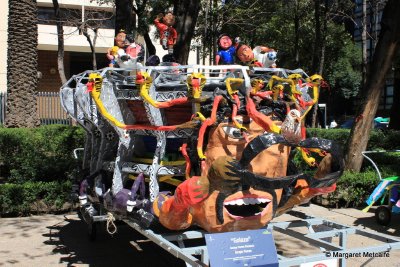 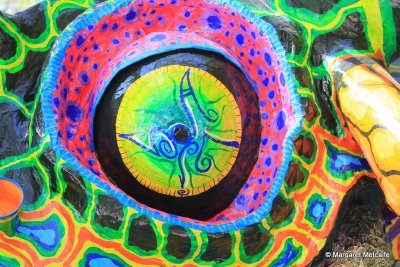 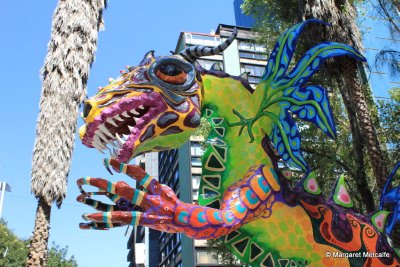 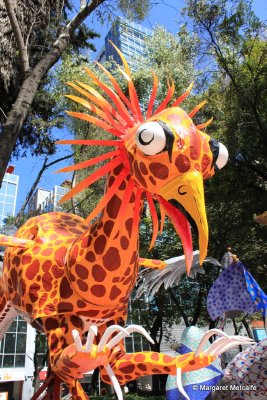 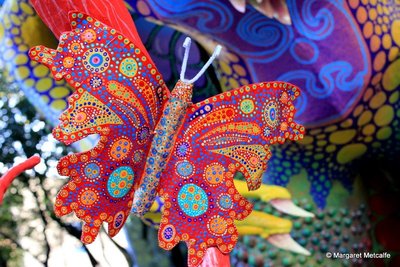 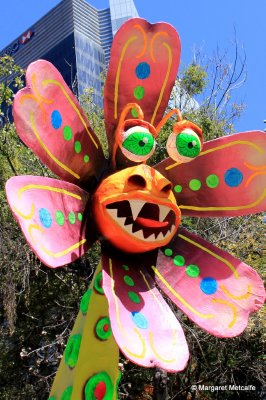 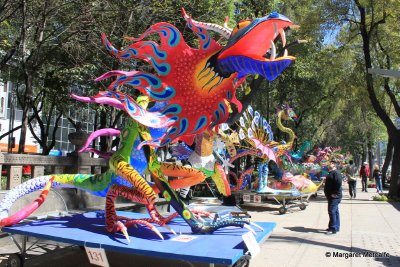 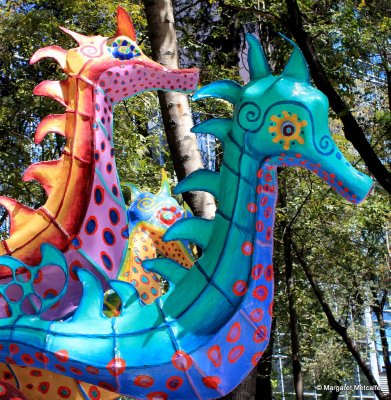 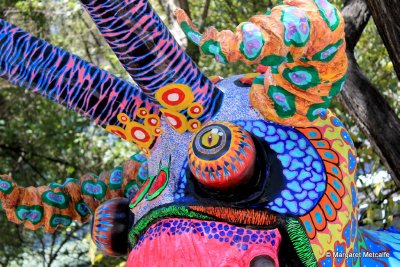 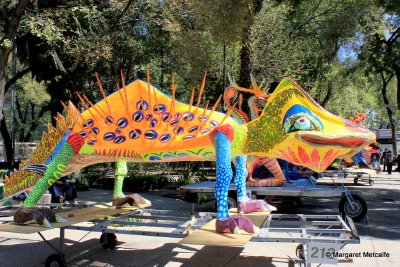 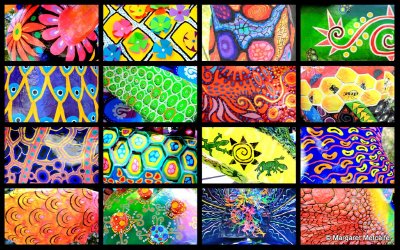 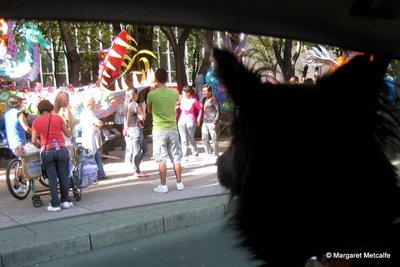 Ozzy admires the alebrijes from the car

P.S. The Monumental Alebrijes have now been moved to the Zócalo until the 6th November