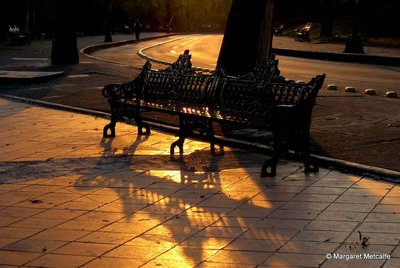 Bench at sunrise in Chapultepec Park

It had to happen, didn't it.

It's very early on Wednesday morning, which is when I do my good deed for the day. This consists of taking Cristina and Marc to school in the car so they can get up half an hour later. Thirty minutes makes all the difference at that time in the morning. They can leave the house at 7 a.m. instead of 6.30. And no bumpy school bus ride all around the dark streets picking up other students, to the accompaniment of unwelcome music on non-teenage radio stations.

We arrive at school where I drop them off without stopping the car. They just open the doors simultaneously and jump out and that way I don't lose my place in the traffic queue. On my way back, I stop off at Chapultepec Park to give Ozzy a quick run. It's still dark enough for runners to be using headlamps strapped around their heads to see where they're going. I try to get us going on a brisk walk but Ozzy insists on sniffing every tree in sight. 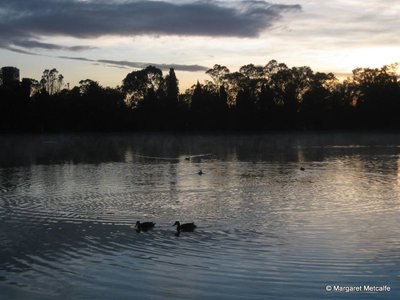 The lake where I walk Ozzy in the morning 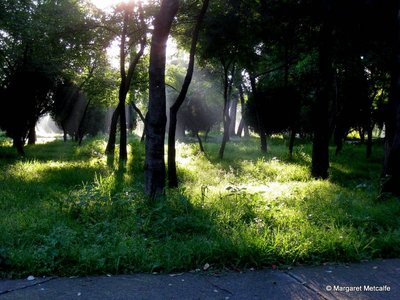 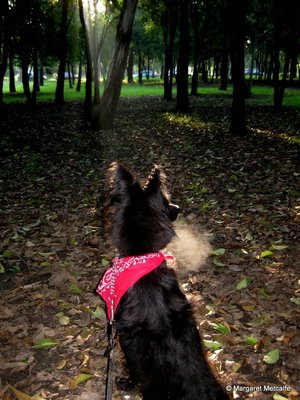 Ozzy on his walk

Back to the car. I go to start the engine. When I turn the ignition key, instead of the usual, triumphant vroooom of a healthy engine starting up, all I hear is a pathetic little gargle leaking out from under the bonnet. "Oh, no!" I groan and try again. And again. But it's no use. The car isn't going anywhere. I'm not particularly mechanical-minded but I deduce it's either a dead battery or something wrong with the starter motor.

My second thought has nothing to do with the fact that I'll have to call the grua, the tow-truck, and go through all the rigmarole of getting the car to a workshop where it can be fixed. No. My second thought is, "Oh no! I can't let anyone see me like THIS!" The thing is, I didn't leave home with the intention of being seen by anyone. Anyone, that is, except Ozzy. I was going to drop the kids off at school and wouldn't even be waving at the other parents or teachers from my car. Not at that time in the morning. Then Ozzy and I would be going for a quick walk through the park on the way back before driving home by 8 or 8.30 a.m. It would be dark anyway. So I'm dressed in my old jeans and jumper. Looking in the rear-view mirror, I can see my eyes are in desperate need of the cucumber treatment, or maybe it's just because they still haven't woken up properly. As for my hair, I'm hard pressed to decide whether Ozzy's fur or my hair is looking more dishevelled at this particular moment. No, I can't let anyone see me like this. I have a go at making myself a little more presentable. I've come out unbreakfasted too. So has Ozzy. If only I'd had a shot of strong coffee and some toast and Marmite, the wait ahead wouldn't seem quite so long. My third thought is along the lines of How long is it going to take for me to get help?

With these thoughts buzzing around my head like pesky flies, I begin to set in motion the process of getting me rescued and my car fixed. First I ring Josep, who says he'll come and find me right now on his way to work. Next I make a call to the car insurance company to ask them to send a tow-truck. The man's 15 questions take longer than I can imagine... "¿Me puede indicar su segundo apellido, por favor, señorita?". He wants to know my second surname. "I haven't got one," I reply. "¿No tiene usted un segundo apellido?" he comments in disbelief. "No, I'm English. We don't have two surnames, only one." "Ahhh", he shakes his head invisibly at the other end of the phone. We move on to some other questions. I'm getting worried that my cell phone will die on me. "¿Podria usted indicarme la ubicación exacta de su vehiculo?". I do my best to enlighten him as to where my car has broken down. Except that I'm in the middle of the park and this street has no name. "¿No sabe usted el nombre de la calle, señorita?". No, it hasn't got a name. I explain more or less where I am. "¿Podría usted esperar un momento? Voy a buscarlo en el mapa." Off he goes to look at the map. We move on to the next question after what seems a very long time. "¿Tiene usted acompañantes que necesitarán ir en el camión con usted? ¿Cuántas personas?". Now he's asking if I have anyone else with me who has to ride in the tow-truck with me. How many people? Yes, as a matter of fact I do. My dog. Will that be a problem? And can I get the tow-truck to drop me off at my house on the way to the workshop so I can leave my dog at home? I don't think it will be a very wise idea to take Ozzy with me. "Sí, señorita." Thank goodness for that. It takes a long 15 minutes but at last he finishes his questions. The tow-truck will be here in 40 minutes or 60 minutes. It depends on the traffic. But don't leave your vehicle, please. It may even arrive a bit earlier.

Josep arrives on the scene and we wait. Ozzy is secretly rather happy at this turn of affairs. He gets to sniff around the trees a bit longer. Quite a bit longer. I find a couple of alfajores and a cereal bar in the car, plus two centimetres of water in a bottle. Josep and I share them between us. Ozzy has a sip of water too. The tow-truck arrives 63 minutes later, just when we begin to worry that they have indicated Mexican time instead of real time. Josep leaves as my little Yaris is being winched up on the back of the tow-truck. 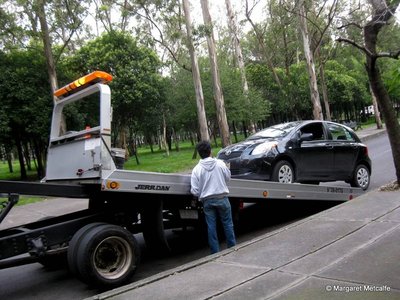 I've rescued Ozzy from the back of the Yaris just in time. Now the man is telling me I can get in the truck with my dog. I open the door and tell Ozzy to jump up. But he takes one look at the noisy, shuddering cab and sniffs the greasy, gasoline smell and refuses. He has no intention of getting in there. I have to literally pick him up and heave him into the small space and climb in quickly before he can jump down again. The man is busy pushing levers outside accompanied by crashes and bangs and whirring sounds. I look around the cab. The first thing I see is a wooden crucifix hanging up in the windscreen along with two bright artificial flowers. Lower down, tucked in the dashboard are a selection of cards with the images of cristos, virgenes y santos. I roll my eyes, hoping he isn't going to drive like he needs protection from all of these. Ozzy begins whimpering. The man jumps in the cab and off we set for Santa Fe. 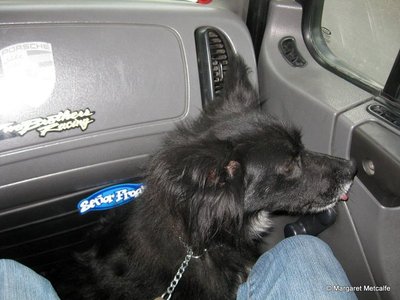 Ozzy squashed in the cab 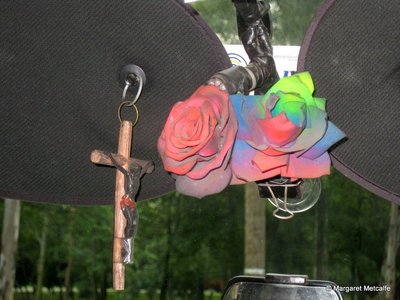 Wooden crucifix hanging in the windscreen 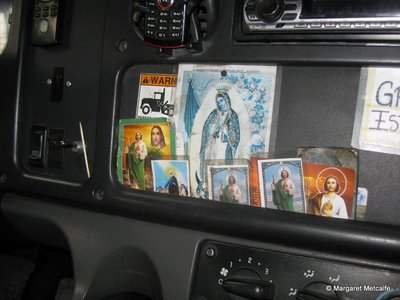 Some of the Cristos and Virgenes 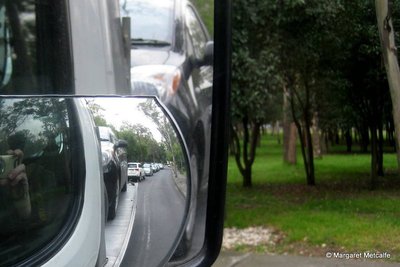 He turns out to be a very respectful driver and my fears are allayed. Ozzy is determined he isn't going to stay cramped down below at my feet. His nose begins to investigate the controls, then he decides he wants to see where we're going. Now he's got his front paws up on the dashboard and is enjoying the panoramic view out of the windscreen. I wind the window down a bit. If there were any music, I'm sure he'd soon be singing along to it. We make it home. 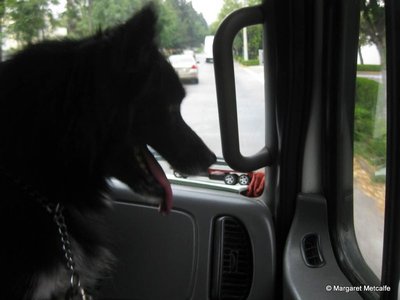 While the tow-truck goes off down the street a bit further to do a U-turn, I run into our house with Ozzy. The key? I've left the key to the back garden in the car. Ozzy will have to come in through the house. For the second time that morning, he refuses. After almost two years of training him not to go through the house, here I am trying to get him to carry out the prohibited action. He's confused. Please, Ozzy. Just this once. I don't want him to drive off with my car. He eventually obeys the contradictory command. I run upstairs for a quick change of clothes, splash water on my face, massage in a few fingers of cream, drive a brush through my hair and give my teeth a fleeting clean.

Thankfully, the man is still waiting for me down the road with my car and we make our way up to Santa Fe to the Toyota workshop. Another wait, while I bite hungrily into a cuernito (Mexican croissant) and polish off some juice kindly put out for customers to consume. This is one Mexican custom I'm beginning to appreciate. There's always some food and drink around. I start watching something on TV, a film about the end of the world. Well, it's the end of my peaceful morning... three hours have gone by. It turns out to be the battery. I have to buy a new one. They promptly fit it and I'm free to leave. 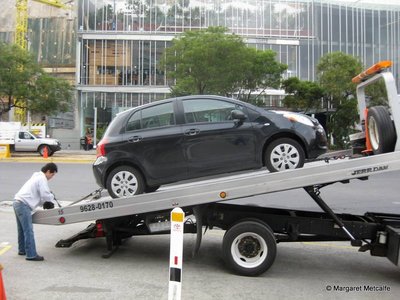 Getting dropped off at the workshop 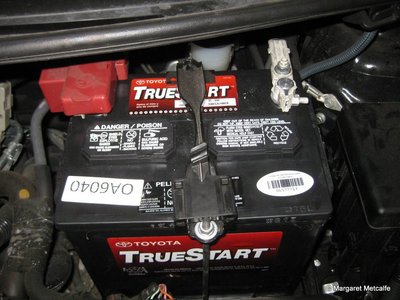 As I drive off, I think to myself, "It could have been worse." I'm relieved. This is Mexico where anything can go wrong, but everything went like clockwork. My car is working again. And I've learned my lesson. Always be prepared. Like a Boy Scout. Next Wednesday, I'm going to make sure I leave the house looking pretty and having had breakfast. 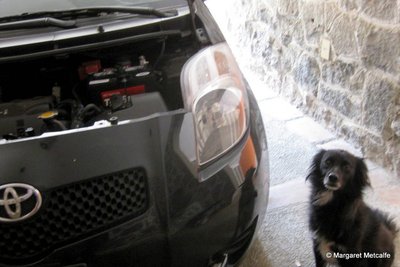 Ozzy's hoping the new battery will die soon so he gets another long walk...

Posted by margaretm 07:03 Archived in Mexico