A teenage drama and a hilarious social comedy

If you want to know how much progress you are making in your attempts to learn the local language and understand the culture, try paying a visit to the theatre. This will give you a fairly accurate indication as to how well you really score. And you may find it a highly entertaining and enlightening experience at the same time.

A Mexican friend invited me to go to the theatre last night with her to see the comedy "Un dios salvaje" (God of Carnage) by Yasmina Reza so I kindly took her up on her offer. I have to confess that my theatre-going activity is far from prolific. In fact, I had only been to a Mexican theatre once before. It turned out that the two experiences couldn't have been more different. 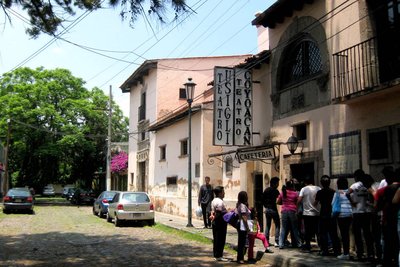 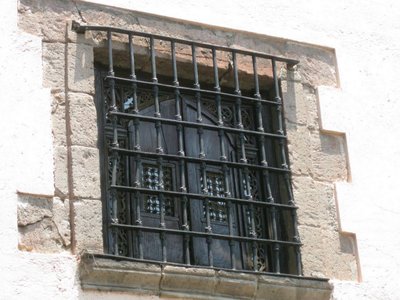 Last May, as part of his Spanish homework task, my 13-year old son had to go and see a play called "Curva Peligrosa" (Dangerous Bend) by Felipe Oliva, which was showing in the Teatro Coyoacán that weekend, and then write a review. The three of us set off, armed with a dozen Google maps printed out, in the hope of being able to find this place in vast Mexico City. Surprisingly, it was tucked away down a small dead-end cobbled street, leafy and quiet. The theatre itself was set in an old colonial mansion with a salmon pink façade and ironwork at the windows. Stepping through the low doorway, we were instantly transported back into the past as we made our way down dark, narrow corridors with stone floors, wooden beams and door lintels, still conserving the aroma of bygone colonial days, until we finally emerged into a tiny little theatre room and stage. Except for two little old ladies sitting demeurely a few rows in front, we were exclusively accompanied by scores of Mexican teenagers, all obviously sent on a similar mission as Marc. There didn't seem to be any other parents, just us.

As the curtain rose, we were catapulted into a drama about three teenagers and all their "firsts" - first kiss, first love, first encounter with drugs and alcohol, first night at the antro (discothecque), an unwanted pregnacy, and finally the tragedy of excess which ends the lives of two of the friends on a dangerous bend. "No-one thinks they will die at 15!" It was a surreal scene, sitting in that tiny dark place, visibly the only foreigners. I certainly learnt a lot of colloquial teenage Mexican expressions that afternoon. 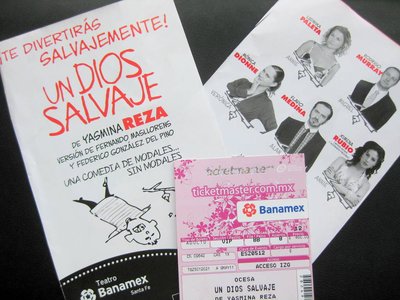 Last night was a totally different story. We whizzed up to Santa Fe to the spanking-new, well-lit Teatro Banamex, built just 2 years ago, to see "Un dios salvaje". I thoroughly enjoyed this riotous comedy whichskewers social mores and mocks humanity's pomposity, conformity and societal illusions. Two couples meet together to discuss an attack by one of their 11-year old boys on the other one. Their discussion begins on a civilized note with all the usual social niceties and political correctness but soon turns sour. Primitive emotions are let loose and the adults become as savage as their children. The cast of 4 excellent actors made it a highly entertaining, hilarious play which last night just happened to be the 200th performance. TV cameramen and press photographers arrived for the unveiling of a special plaque marking this milestone by several well-know Mexican actors and actresses. Needless to say, I had no clue as to who they were, showing how low I scored on such local matters!

Following these two experiences, worlds apart, I'm determined to visit the theatre more often here in Mexico... for one thing, it's an excellent way to expand my repertoire of Mexican idiomatic language!