What do Mexican drivers hang in their windscreens? 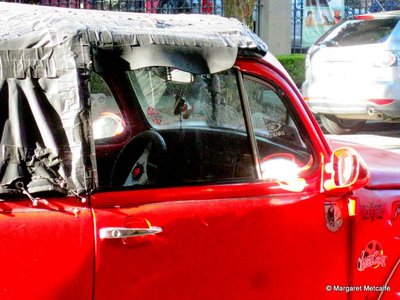 The other day when I was driving up to Cuajimalpa, I got stuck, as usual, in the roadworks. I'm sure the highway is going to be extraordinarily efficient when they've finished doing the work but it's been at least 6 months of driving misery so far. There's a certain stretch where three or four lanes have to cross to the other side into one lane over a deeply rutted, unpaved part. You don't need me to tell you that this simple interchange takes a month of Sundays to get past. There I was, sandwiched against my will between two enormous trucks, when one of the trucks moved ahead and up next to me came a taxi. The driver was in his 20s and had no passengers but my eye caught sight of something. The rear-view mirror on his windscreen had unwittingly become a hanger for upmteen different items. It was literally bending under the weight of an unguessable number of rosaries, several crosses on chains, a soft toy and some other unidentifiable knick-knacks. The thick clump of travelling accompaniments can only have severely obstructed his view of other road users and vehicles which seemed somewhat pointless. He'd put them up there to keep him safe on the road and they were actually doing more harm than good.

I decided to do a bit of personal research on the subject while I was stranded among the solidified traffic. What do Mexican drivers hang in their windscreens? This investigation project, albeit rather limited in scope and time, threw some light on the matter. I began to carefully (but not too obviously) check out the rear-view mirrors in the cars, trucks, buses and taxis all around me and those coming towards me on the other side of the road. I didn't want anyone to think I was prying into their vehicles and their lives. Surprisingly, what in previous months has been a totally monotonous, frustrating wait, when I usually turn to a book or magazine to keep my mind alive, actually took on a rather interesting turn that morning.

At the end of the journey, my findings were as follows:

1. The overwhelming majority of drivers on that road had something hanging up at the front windscreen. Maybe the vehicles come out of the manufacturing plant complete with an amulet which can be removed if wanted? It's a definite possibility here in Mexico.
2. About 80% had rosaries and/or crosses and crucifixes on chains. Was this a sign of their profound sense of religion, a superstition or some kind of modernized Aztec belief? Something akin to a talisman?
3. Quite a large proportion had more than one rosary or crucifix, as if they felt one was not enough to protect them.
4. There was a clear correlation between the antiquity of the vehicle and the number of items hanging up. The older and more rickety the vehicle, the larger the tangle of "whatcha-ma-call-its" blocking the view. Obviously, the greater the probability of breaking down or having an accident, the more help needed.
5. Other things seen hanging up included furry dice, dream catchers, soft toys of varying sizes, virgencitas, pictures of saints, medallions, rabbit feet, a green chilli, Christmas tree air fresheners, miniature boxing gloves, beads, feathers, ribbons, a witch, football team flags and scarves, a pair of mushrooms, miniature shoes, sunglasses...
6. There were quite a few Mexican flags, Mexican hats and Mexican dolls which must have been left there from the Independence Day celebrations in September but, in general, the Mexicans are quite patriotic.
7. The most unusual items were an extremely large yellow Tweety Pie (aka Piolín), hanging upside down by one leg in a bus and an enormous wooden cross with a dying Cristo nailed to it in a pesero, a once green-and-white bus which was falling to pieces. The exaggerated size of the wooden cross was clearly a desperate sign that the driver was sure he'd require divine assistance. I'm not sure about the meaning of Tweety Pie.
8. The vehicle which was most likely to have something hanging up was .... the VW Beetle, commonly known as the Vocho here. I'm convinced that's because they are so old, no-one has bothered to remove these items over the centuries.
9. Drivers of all ages were seen putting their faith in these artifacts, not just older ones. This was particularly true for taxi drivers.
10. I saw at least three vehicles which didn't even have a mirror, so there was nothing to suspend anything on, and an incredible number of vehicles with broken or cracked windscreens.

To sum up, whereas in other countries the front of the car would be equipped with GPS navigators and speed trap detectors, i.e. high-tech protection devices against getting lost or being stopped by the police, it would appear that Mexican drivers prefer to have some kind of cross or rosary swinging from the mirror, obviously making them feel safer. Safer from themselves and the way they drive or from other drivers? Who cares. Once you know that almost none of the drivers in Mexico City have learned to manejar with a driving school or taken a driving test, you'll realise it applies to everyone, including the driver, other vehicles, potholes, pedestrians, stray dogs, uncovered manholes, bridges, falling trees, flash floods.... Nobody has the faintest idea that a Highway Code exists so these talisman items are absolutely essential for to getting from A to B without a mishap.

As I was sitting there immobile in my car, I recalled my first few weeks living here in DF, before I had a car. In those days, I often had to use the infamous taxis to get around. Those early journeys were highly memorable for one reason or another but I particularly remember one taxi driver. When I got into his car, the dashboard looked more like a Mexican church altar than the controls of a vehicle. All around the windscreen, and tucked into the trim around all the windows, he'd wedged cards bearing pictures of saints and prayers. Rosaries, crucifixes and medallions were everywhere. I half expected to see candles lit and incense clouding up the windows. What I didn't expect to see was a small jolly Santa Claus inside a snow globe firmly stuck to the dashboard above the steering wheel. Maybe it was so that when he rolled the car, it would shake the globe up and the snow would flutter down again to the bottom as his taxi turned back up the right way. I hoped not.

Quite frankly, seeing all this paraphernalia gave me the spooks. I really wasn't sure I wanted to see what his driving was like if he felt he needed so much help from the Far Beyond. Since no other taxis were available, I offered up a prayer and settled back. I have never had a taxi ride quite like that, before or since. He set off as if he was being chased by a police car, and switched recklessly from lane to lane as if it were some kind of F1 race. Every time we hit a speed bump (aka "sleeping policeman"), I was thrown out of my seat, landing very painfully, and had a few seconds to recover before we hit the next one. I kept my eyes closed most of the time, not wanting to see what he was just missing. But the eeriest part of the journey was when we passed by any church. Without taking his foot off the accelerator, but happily taking his hands off the steering wheel, he would grasp one of the rosaries hanging up at the mirror, kiss it and solemnly cross himself. Yes, make the sign of the cross, as if merely doing so would keep him from having the accident which he himself was about to cause. I had never felt so happy to get home and vowed never to get into another taxi if the driver had more than four rosaries hanging up. 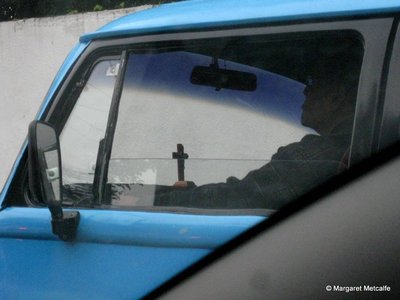 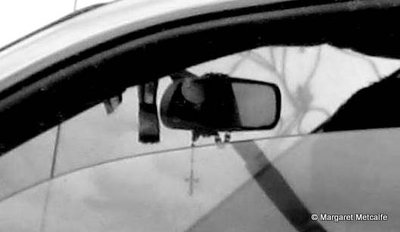 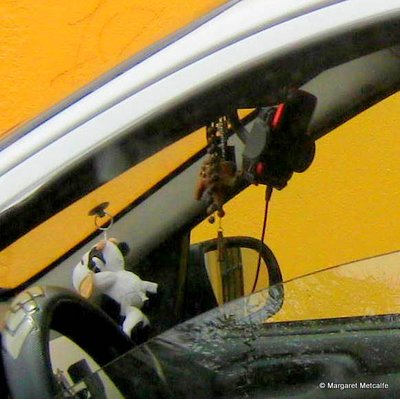 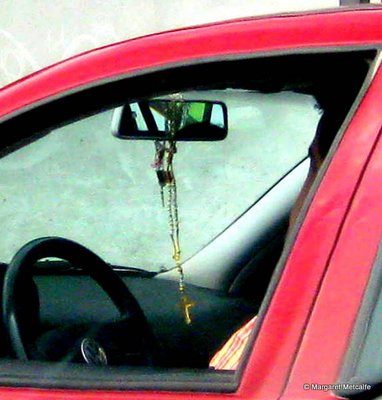 Posted by margaretm 03:58 Archived in Mexico