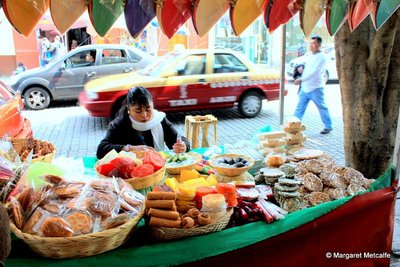 A while ago, a Mexican friend of mine asked me a question which I thought was rather strange. "¿Cocinas en casa?" Do you cook at home?" Maybe she thought my husband was the chef in our house. "I mean, the food in Mexico is SO cheap and fresh and you can get it everywhere that it's hardly worth cooking yourself!. I rarely cook," was her reply. Ah, now I understood what she was getting at.

For those of us who come to Mexico from other parts of the globe, it's one of the first things we notice. Food, in every imaginable shape, colour, form, texture and content, impregnates street life with its characteristic fragrance and is literally as commonplace as the air particles you breathe here. It would be as impossible to dissociate food from Mexico's streets as it would be to bleach the colour out of its buildings and textiles or wrench religion from the heart of its people. Everywhere you go, at all times of the day, you will be confronted with one of the major aspects of Mexican life, their national hobby... eating out. Not in a restaurant, but on the streets. 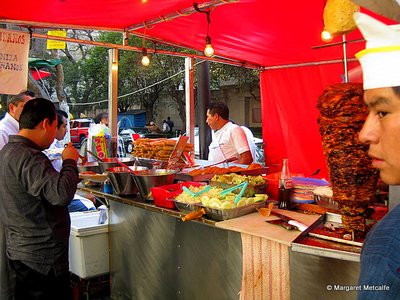 Fast food served on the street 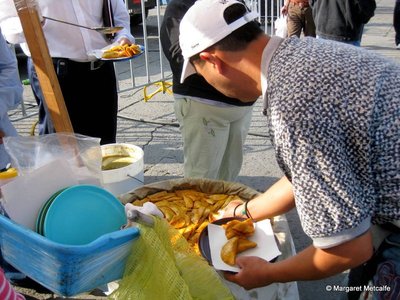 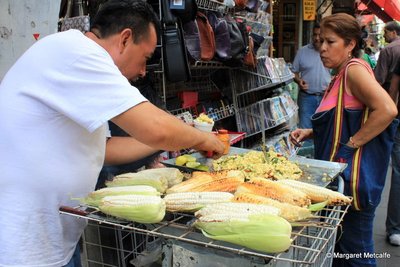 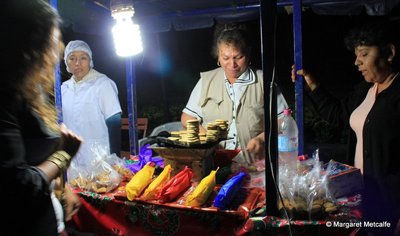 Take where we live, for example. Street food wafts into our house, not as an aroma, but rather in the form of sounds. We hear the loud, metallic nasal sound of a Donald Duck voice blasting through a loudspeaker... "tamales oaxaqueños, ricos y calientitos"... as the man comes round the streets on his tricycle packed with energy-giving fare. Or the shrill whistle of a contraption, stoked with burning wood, which is pushed up and down the nearby hill. Back home in Europe it would be used for roasting chestnuts, but here it roasts corn-on-the-cob from which the grains are extracted and drenched with lime and chilli powder or chipotle-flavoured salsa. Walk just metres down from our house and you'll bump into a large bulky pick-up truck which is often parked inconveniently half over the narrow pavement, on a blind corner, opposite a parked car. In the back sits a man who looks like he's about to play a home-made drum kit. Large pots and pans gather around him, some steaming, and he dishes out things I've never seen in my life before. Amazingly, there is always a numerous little group of people standing around in the road and on the pavement, platicando or chatting away, totally oblivous to the fact that cars and buses are having difficulty in passing. 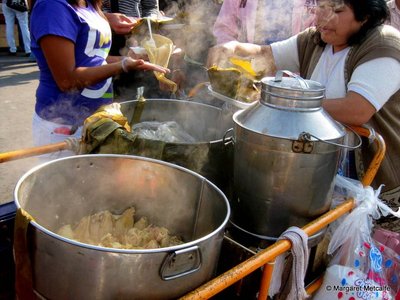 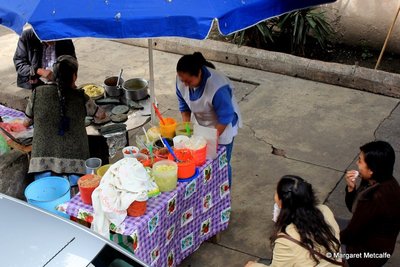 Two women cook for workers from nearby offices 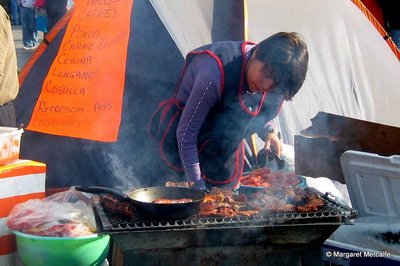 Some people even barbecue in the streets 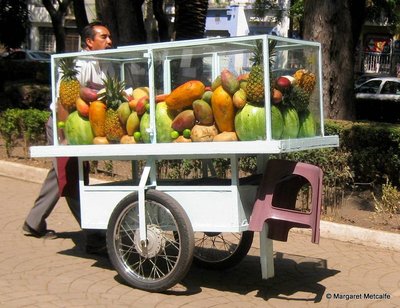 Wheeling lots of fresh fruit around

Move on a little further down this street and you'll come across the lady who arrives most mornings in her small blue Hyundai Atos car before daybreak. As I walk my dog, I watch her open the hatchback, and start setting up her table and stool, heaving buckets of cool water and crates of Coke bottles to the pavement, and carefully arranging the snacks and sweets on her table. Then she sweeps the road all around her mobile "shop" and settles down to do some sewing or reading. In the cold weather, she sets up on the sunny side of the road. In the warm weather, on the shady side.

But that's not all. We have just reached the main road and as we turn the corner, right by the bus stop, is the next eatery. This one specialises in breakfast. I'm not sure when these people arrive as they are usually busy cooking, boiling or warming breakfast items on a stove which is roaring away when I arrive. They've put out a few upturned plastic buckets and stools for clients who sit or stand around with steaming cups of something (I have yet to determine the exact identity of the liquid), biting into tortas, tacos and tortillas while they wait for the bus. Several times, Ozzy our dog has rounded the corner and almost landed in the pot. 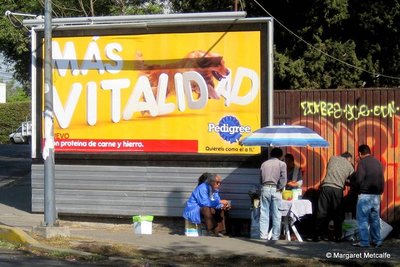 Breakfast stop by the bus stop 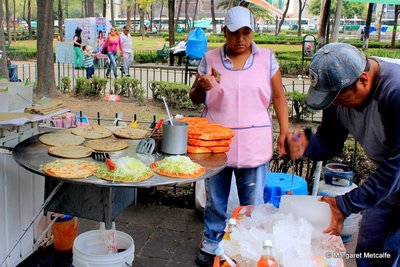 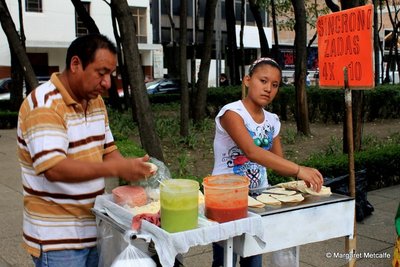 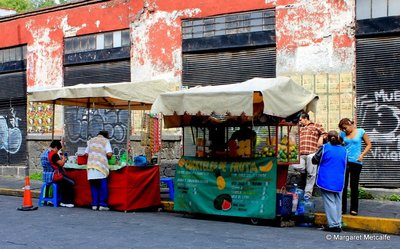 Then if you turn right into Paseo de la Reforma, about 500 metres down the road, on the other side, you'll see a rather curious sight around midday. At the bottom of some shiny blue high-rise office buildings, parked half on the busy road and half on the pavement, obstructing the bus stop and the five lanes of fast-flowing traffic trying to condense into three, is often a battered old silver VW Beetle, with its bonnet up, surrounded by a crowd of onlookers. Since I was usually busy trying to avoid being crushed by the solid tidal waves of vehicles engulfing me on either side, I found it difficult to see what everyone was so interested in. Until one day, I led the traffic for once and managed to sneak a peek. There was a lady energetically dishing out lunch from a series of cauldrons, squeezed tightly into the tiny space where other cars normally put their engine. No wonder there were so many suit-and-tied men around. They weren't chivalrously attempting to fix her engine at all! 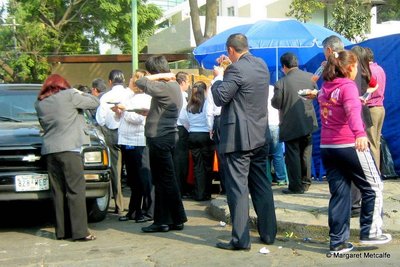 Quick business lunch in the street 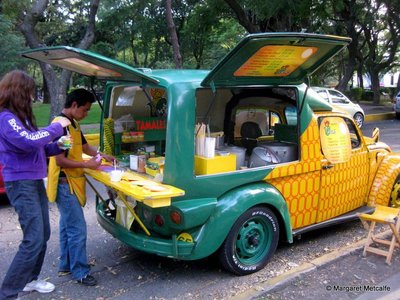 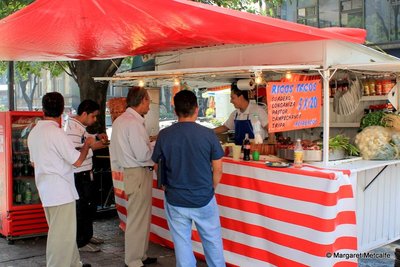 This man has even set up a fridge for cool drinks! 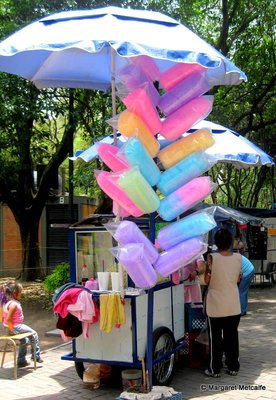 Bright-coloured candyfloss being sold in Chapultepec

It doesn't matter where you go, you will come across Fast Food servers at every turn in Mexico. It may be the housewife in her bright apron and folding stool with a basket of churros by the road. Or the family who parks near some offices, unloads tables and plastic stools and a gas container from an old car boot. Within seconds, the fire is roaring, you can hear the chop-chopping of meat and vegetables being slaughtered, and the familiar smell of carnitas or tacos al pastor begins to saturate the air. In heavy congestion, where any possible vehicle movement has been strangled by road works or congealed traffic, an army of men, women, boys and girls march along between the cars offering gorditas de nata, pushing large plastic dustbins on wheels containing ice-cold water or Coca Cola or carry sticks hanging with fluorescent-coloured abañicos, Mexican snacks. Outside schools you can see people with push-along trolleys selling plastic cups of freshly cut-up mango along with a small plastic fork to make it more pleasurable for your fingers. A really healthy snack for a few pesos. I even remember wandering around the Alameda Park not too long ago and seeing some ladies pushing wheelbarrows full of jicaletas, sprinkled red with chilli powder, and other snacks. Now that's ingenious, I thought. Everywhere, Mexicans eat outside, on the street, in their car, in the park, at the corner, from the back of a truck or car, on the metro and in a million other creative places. 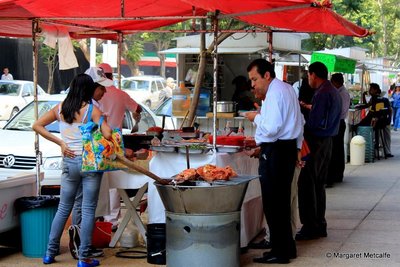 Eating lunch in the street 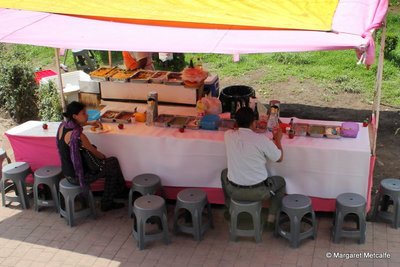 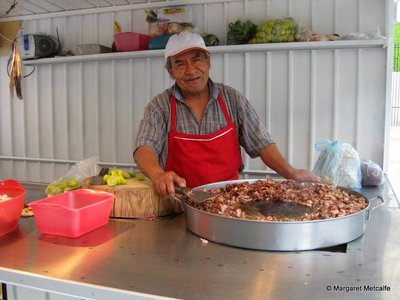 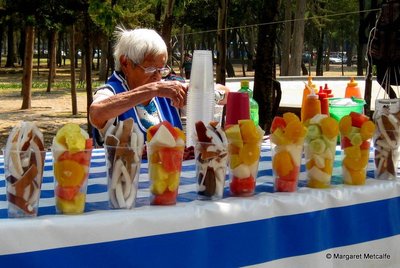 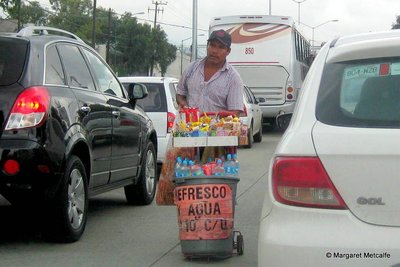 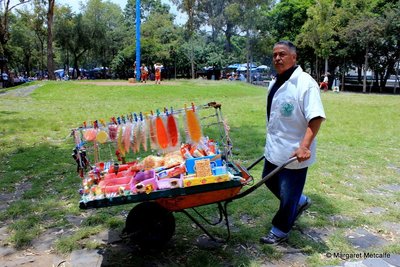 Using a wheelbarrow to take his snacks and sweets around 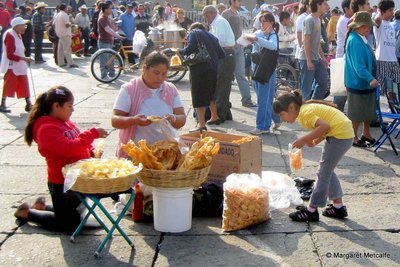 Mexico's national hobby is alive and well and I can safely say that, barring a major catastrophy, you'll never starve in Mexico. In fact, just seeing and smelling all that Mexican-style fast food will give you your fill most days. And to answer my friend's question, "Yes, I do cook at home." I haven't seen them selling spaghetti bolognaise or Indian curry on the streets yet. 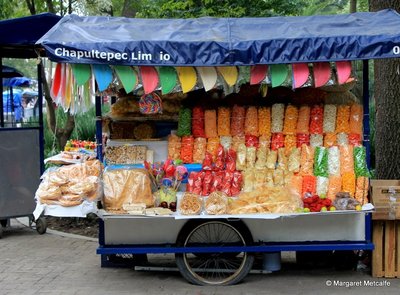 A snack stand in Chapultepec park 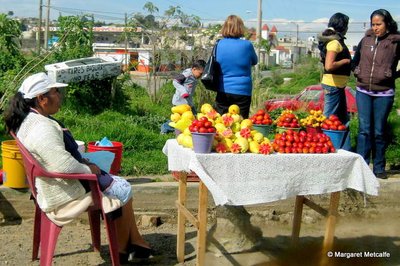 Sitting by the roadside selling fruit 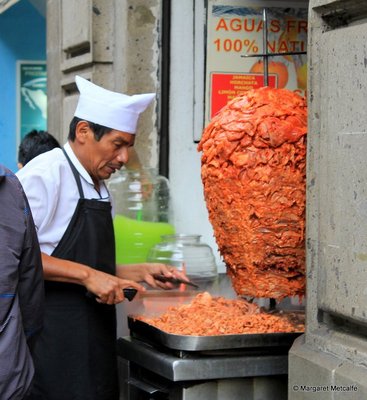 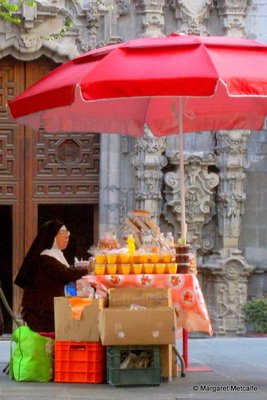 A nun selling home-made food outside a church 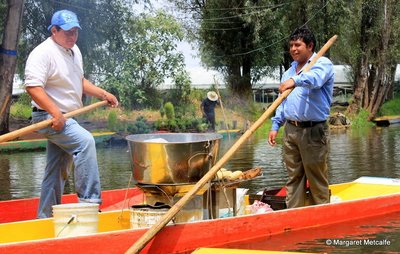 Bringing lunch to you on the canals at Xochimilco