Malinalco, one of Mexico's 38 Pueblos Mágicos 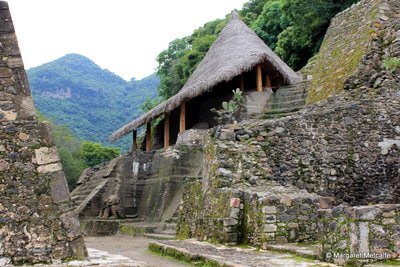 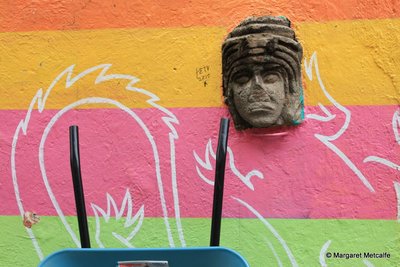 The town is packed with colour

On the map, Malinalco looks as if it's just around the corner from Mexico City. Driving there is a different matter, though. On average, it will take you a good two hours to get to this small mountain town, depending on how many ancient wheezing vehicles you get stuck behind, how potholed the road is after the rains, whether any of the villages you go through are having a fiesta and other equally diverse reasons.

On leaving Mexico City, you first have to climb up over the mountains to about 3000 m (over 9000 ft) and then make your way along the small roads. The trip itself can be quite entertaining. You'll probably see sheep sharing football fields with players, wayside stalls selling bright green sausages, shrines along the way where someone went off the road or had an accident, people riding horses and donkeys, hundreds of stray dogs, a place selling frogs and lots of small disorganised villages with tangles of black spaghetti hanging over the roads which supposedly are electricity lines. Depending on the weather, you may even have to drive through thick cloud which whites out everything in front of you and on either side. But then suddenly, you look down on a beautiful lush green valley with strange lumpy mountains all around and you drive down into a different world.

Malinalco may be fairly close to Mexico City and Cuernavaca but it has a kind of remote, cut-off feel to it. It's a charming little town with its cobbled streets, colonial-style houses and hidden secrets tucked away among exhuberant vegetation. Colour is everywhere... thick blue skies and bubbly white clouds, succulent jungle all around, bougainvilla and other eye-catching flowers, multi-hued buildings, vivid market stalls.... a real photographer's paradise. For a small mountain town, it's also got more than its fair share of cultural sites, which include impressive Aztec ruins high up on the mountainside affording spectacular views over the valley below, a 16th Century monastery with unique frescos depicting cactus plants, trees and birds, totally in keeping with the surrounding natural environment, a museum, arty places and a string of interesting festivals. As we also discovered, it's a great place for trying out some delicious Mexican dishes. 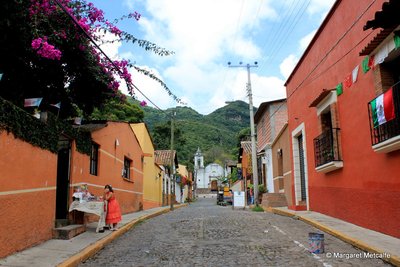 Looking up a cobbled street 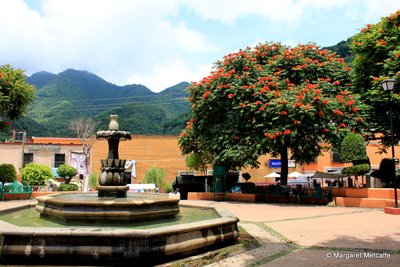 Fountain and shady trees in the main square 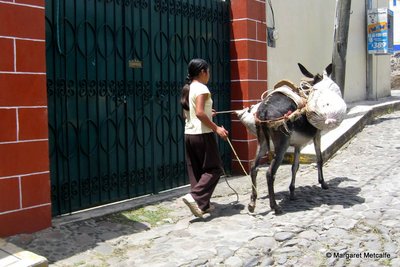 Girl and donkey making their way up a cobbled street 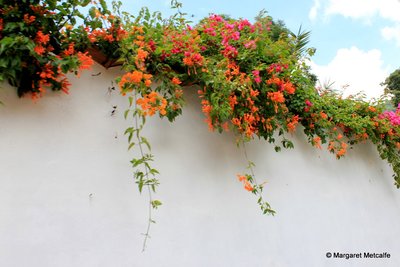 Bougainvillia and other colourful flowers 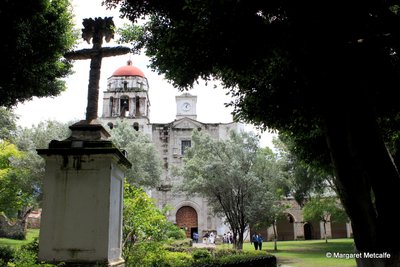 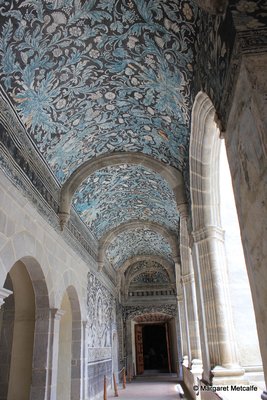 Beautiful frescos in the cloisters 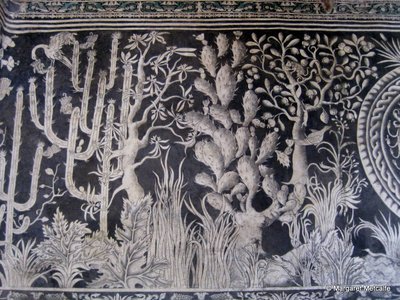 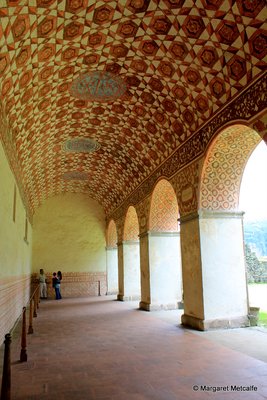 We'll never forget the first time we went there. We had only been in Mexico for a few weeks when some friends of ours said they would take us to a picturesque little town for lunch, called Malinalco. "Where is this Malinalco?" I asked. "You have to go up to La Marquesa and then it's further out that way. We'll be leaving at about 1.30pm." Well, La Marquesa is about 20 minutes away so we guessed it would be maybe another 40 minutes or so after that. We assumed wrong. Following their car, we made slow progress and as the time ticked by, our stomachs began to protest noisily. Breakfast had been around our usual 8.30 time and we'd had nothing else to eat. By the time we reached Malinalco and parked, it was getting on for 4 pm. Now that's not an unusual time of day for Mexicans to eat lunch, especially at the weekend, but we were definitely not used to eating so late.

We forgave Malinalco for being so far away, though. Set in a beautiful, nature-blessed valley, off the main tourist trails, it really was worth a visit and we soon filled our ravenous stomachs up with all sorts of tasty Mexican dishes at a curious, colour-drenched restaurant in the main square. This was followed by a leisurely stroll around the markets to help the digestion process, and a peep inside the Convento del Divino Salvador which was built by the Augustinian monks and dates back to 1540. What was a huge monastery like this with its magnificient cloister and unusual frescos doing right out here in the sticks? I wondered. (On our subsequent visit, three weddings were underway in this enormous church.) That was as far as we got that first day since we then had to make our way back home to Mexico City. But it was a great appetizer. 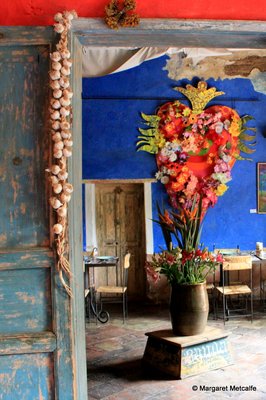 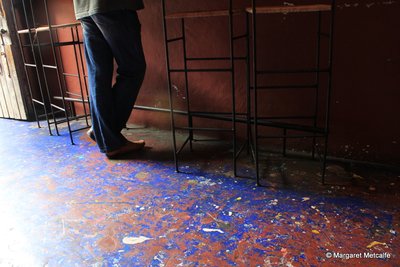 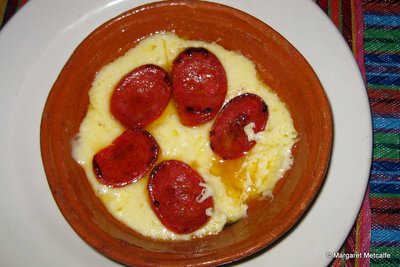 Dish with chorizo and queso 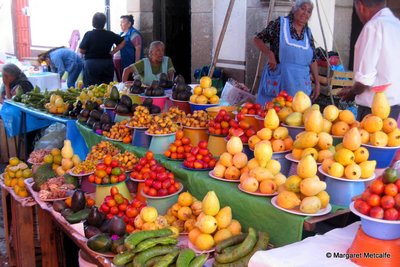 Market stall with fruit and vegetables in neatly stacked piles 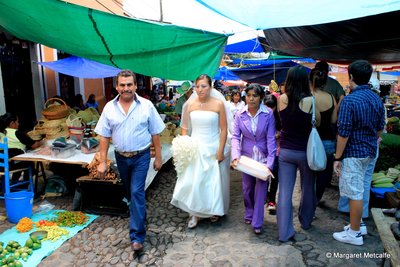 Bride on her way to her wedding at the church, passing through the market 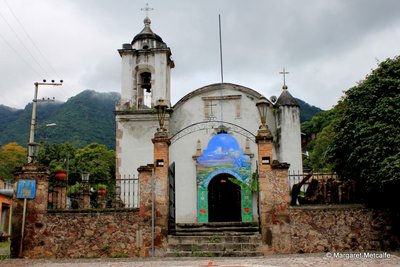 One of the many small churches in Malinalco 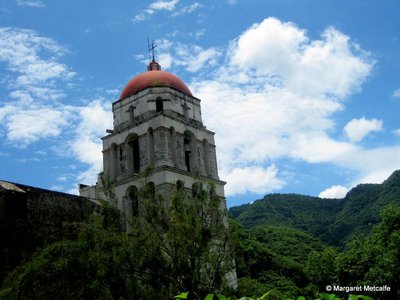 Church tower with the mountains behind

Since then, we make our annual pilgrimage to Malinalco and have discovered the impressive ruins high above the town. To reach them, you have to walk up 358 stone steps cut out into the mountainside which lurks somewhere beneath a thick cloak of moss, flowers and trees. Your lungs tend to protest more than your legs at this altitude but it's well worth the wheezing. This important Aztec site and ceremonial centre perched up on Cerro de los Idolos (Hill of Idols) towers 215 m (720 ft) above the town and was used as a centre for training and educating young recruits to the Imperial Aztec forces. If you're lucky, a guide will explain what the different structures were used for, and will point out the 13 steps, flanked by two headless jaguar statues, which lead up to the Templo de los Guerreros Águila y Tigre, with its thatched roof. This site is unusual in that it is one of the few places in the world that have temples carved into the mountain itself and is unique in America. Even if you aren't particularly interested in the history and archeology, the views are breathtaking and the exercise helps you work up an appetite. Looking down on Malinalco is like peering at a miniature town, complete with its daily noises wafting upwards. 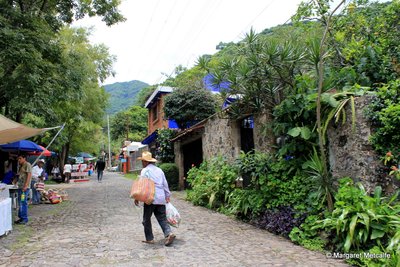 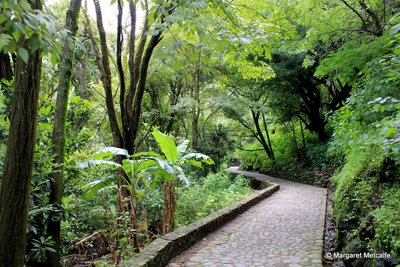 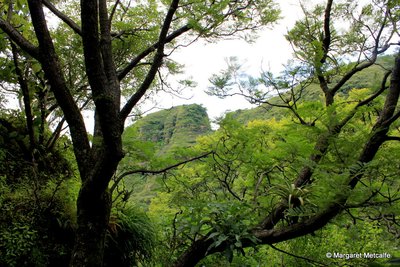 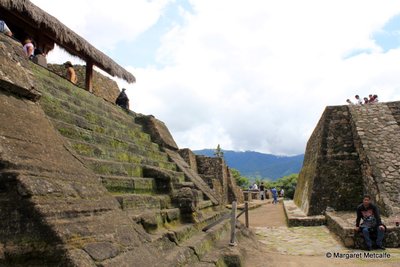 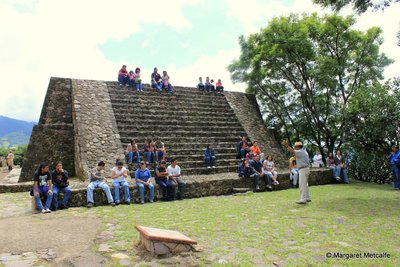 Guide explaining the history of the site to visitors 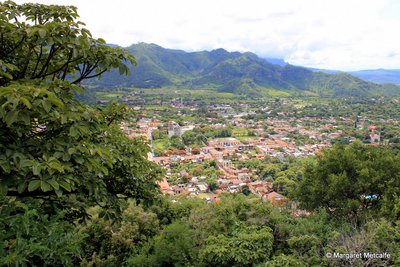 View looking down over the valley

All around the town are a whole range of restaurants and eating places. This year we ate at Las Pilares, enjoying delicious chiles en nogada, a tasty dish often eaten over the Dia de Independencia festivities. Its green, white and red ingredients represent the colours of the Mexican flag: green chile poblano, stuffed with meat and fruit, covered in a creamy white walnut sauce, and decorated with red pomegranate seeds. 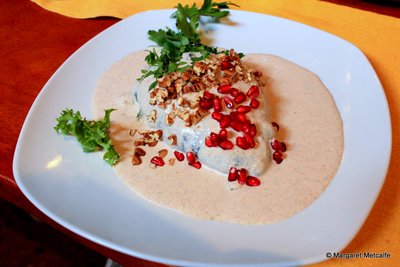 Fruit and vegetable markets, handicraft stalls, stands dishing up Mexican delights, and a glimpse into the daily life of the people in this town also make Malinalco an interesting place to visit. Once a simple mountain pueblo, it started becoming the weekend residence for a certain sector of people in Mexico City and now it's beginning to attract an arty community. Yet it continues to be off the main tourist trail for foreigners. And maybe that's a good thing. Let's keep its a secret. 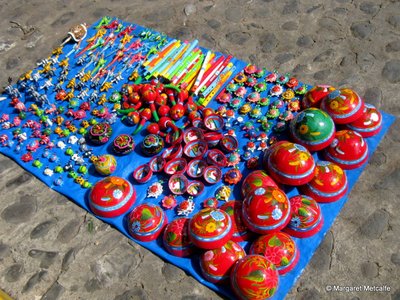 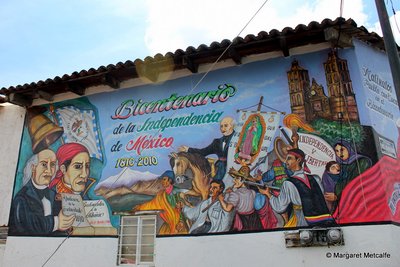 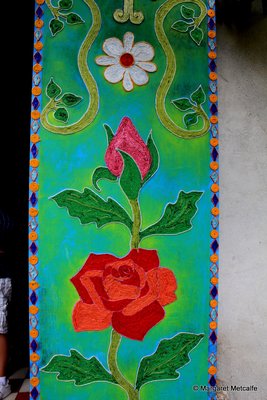 Close-up of artistic panel around entrance to small church 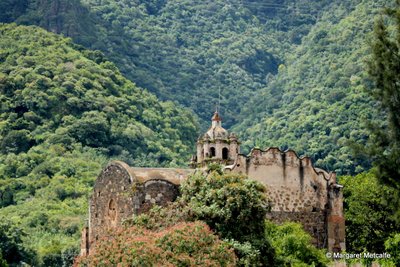 Another church in the mountains

Posted by margaretm 12:57 Archived in Mexico

Beautiful pictures! Mexico just moved up my list of places to visit!

Thanks! I've been living in Mexico City with my family for over two years and both the city and Mexico in general is definitely a great place to visit - so much colour, culture, great food, friendly people.