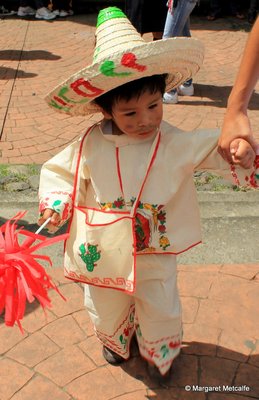 A young boy participating in the festival 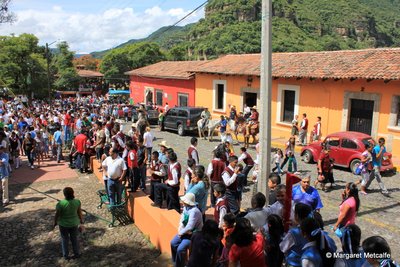 When we set off to go to Malinalco last Friday (Mexico's Dia de Independencia holiday), little did we know that within an hour and a half, we would be caught up in a colourful, noisy theatrical performance of the historical events leading up to Mexico's Independence. As we drove down into the town, it was bright and sunny. Is there anywhere to park?, we asked a policeman who was busily lounging by the side of the road. "La plaza está cerrada. Puede intentar estacionar aqui en esta calle", he replied. The square was closed to traffic but maybe we could find a parking space in this street. No sooner had we started to bump down the cobbled street, when a rabble of small Mexican horses and their riders clattered noisily and unexpectedly round the corner and galloped straight up towards us. For a moment I thought I saw Miguel Hidalgo, the priest who is famous for being the instigator of Mexico's Independence, astride his horse, his black cassock flowing and his bald crown jealously guarded by long shocks of white shoulder-length hair. Spotting a space along the side of the street, we quickly reversed into it and let the boisterous group stampede past us. 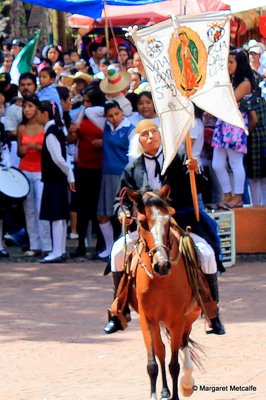 We found ourselves right in the centre. It seemed like the whole town was out in the streets, gathering expectantly in the square. Children and teenagers in their freshly-pressed school uniforms, bands with their shiny musical instruments, and local people of all ages dressed up as Mexicans from by-gone days had obviously just finished parading around the town. And sure enough, here came Miguel Hidalgo again, carrying the standard of the Virgen de Guadalupe, clip-clopping around the other side of the square with his band of rather wild-looking Mexican campesinos, eager to help him prise off the iron shackles of Spanish dominance and oppression. What ensued next was a very noisy representation of the messy struggle between the Mexicans and their conquistadores, the Spanish. Petardos (firecrackers) shredded the air with ear-splitting cracks, smoke filled the square, guns were waved around recklessly, and horses and riders and other characters collided together in an undecipherable tangle under an enormous awning. Meanwhile, the bands played thunderous brassy music as the crowds followed the battle with shouts of nostalgic pride. 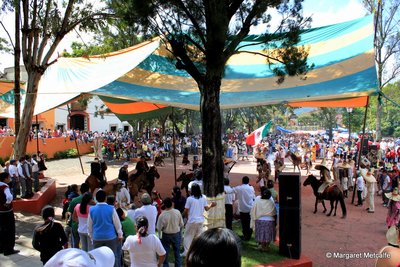 Square where the battle took place 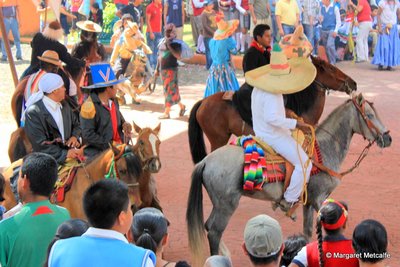 Some of the participants on horses 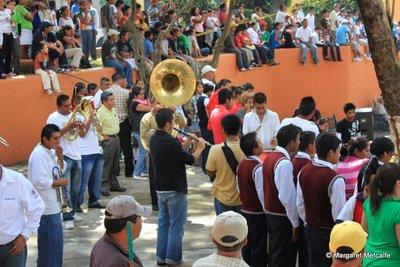 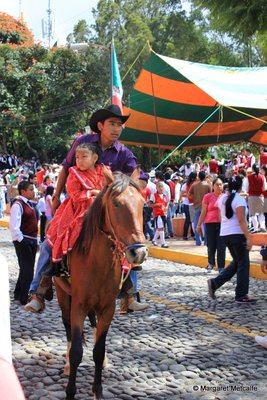 A father riding with his young daughter through the streets 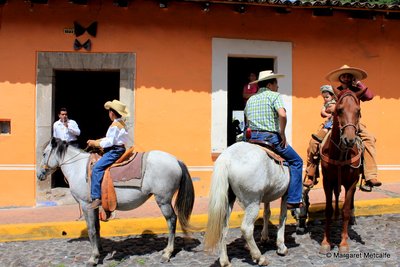 Men and boys on horseback

We strolled down the cobbled streets which were fringed by red, orange and yellow-tinged buildings peeping out from under their chunky-tiled roofs. Huddled all around us in this lush valley were lumpy mounds of volcanic mountains and cliffs. The sky was a healthy blue, with traces of milky-white clouds. On one street corner, the elected beauty queens of the pueblo were sitting on their makeshift thrones on the back of a truck, surrounded by an entourage of young and not-so young gawking males. The main square along with its kiosko and fountain, chaperoned by shady trees with flame-coloured flowers, was squeezed on all sides by a colour-splashed muddle of market stalls heaving with leather shoes and bags, vivid fabrics, ceramic plates and dishes, basketware and other crafts. 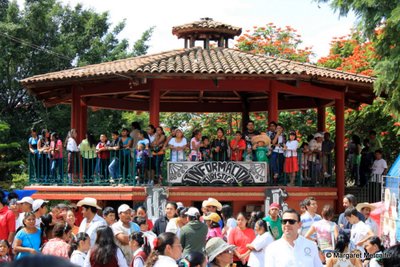 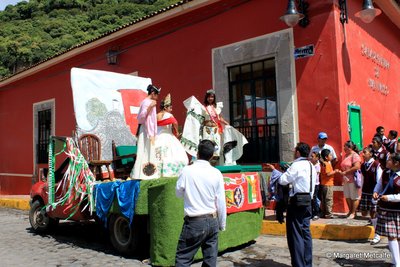 The elected "beauty queens" of the town 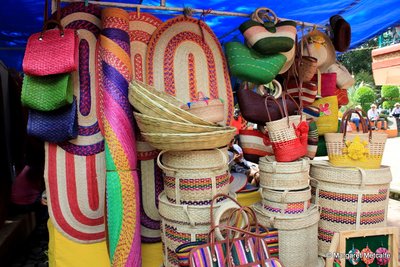 We slipped into one of the small eating places nearby, which appeared to be run by three young ladies watching a military parade on television, and ordered a couple of Cokes. Just then, three of the victorious campesinos, their faces blackened and almost totally hidden from sight by huge pointed, broad-rimmed Mexican hats, burst in. They were obviously thoroughly relishing playing their part. Brandishing their rifles, their chests criss-crossed by bandoliers studded with shiny bullets, they shouted something at us. We didn't understand. Until they tried a different word. "¡Una cooperación, una cooperación!". Ah, so that's what they wanted. Digging deep into our pockets, we found a few coins and off the went as pleased as if they'd won a major battle against the Spanish. 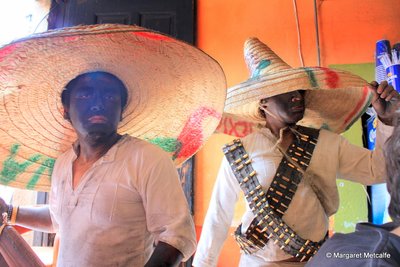 Two "campesinos" ask us for a tip 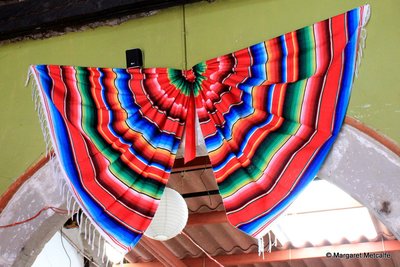 A couple of hours later, they were still going strong, trotting around the streets on their horses, or stalking oponents. It was obvious that on this special day, the Dia de Independencia, the locals were not only taking pride in their Mexican identity, but also having a great time participating in the show they put on every year. I'm just glad they didn't know we were from Spain. 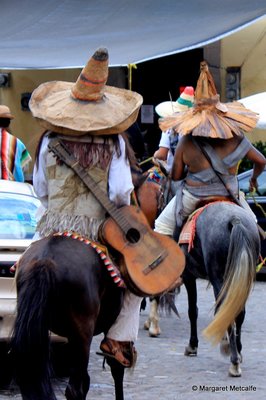 Still riding around the town 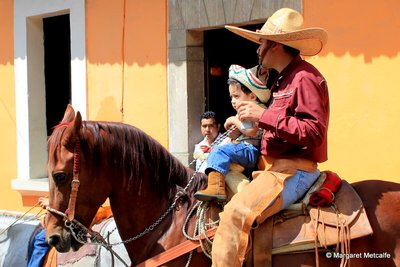 Father and son on horseback

Posted by margaretm 13:17 Archived in Mexico