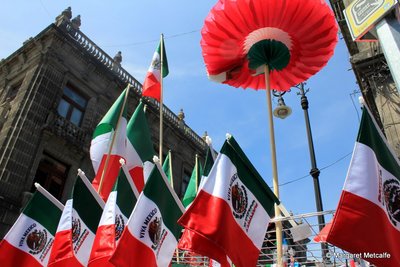 Flags and other decorations for sale on the street corner 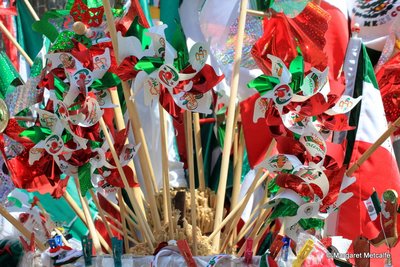 Green, white and red... red, white and green.... the whole city has turned into the colours of the flag of Mexico. And this is because Mexico is celebrating its Day of Independence from Spain tomorrow on 16th September. Two hundred and one years of going it alone and ruling themselves are certainly worth commemorating. Since the beginning of September, as every year, there has been an increasing feeling of festivity in the air. You know something's going to happen, there is a kind of contained excitement and patriotic pride which will burst today, Thursday.

As you make your way around the city, you'll see that government buildings, businesses, hotels, restaurants, shops and houses have unrolled long banners sporting the three colours of the Mexican flag and are beginning to look like giant gift-wrapped presents. Some of these flags are dozens of metres long, right along the length of the building, some top to bottom. Others have so many flags and green, white and red decorations that the façade is all but hidden. At hundreds of street corners, you'll see stands selling not only flags, dresses and hats, but every possible type of item that can be made in red, white and green. ¡Viva México! 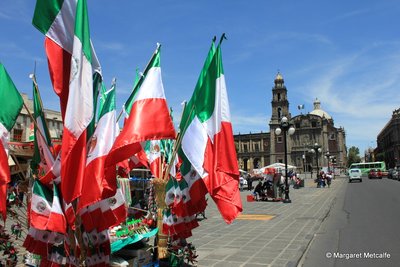 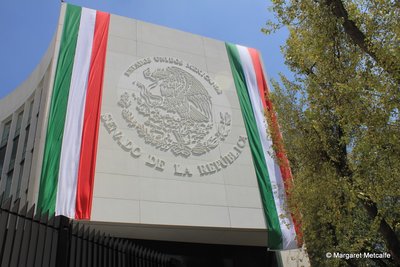 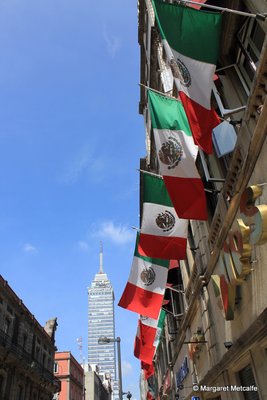 Looking up Calle Madero towards the Torre Latino 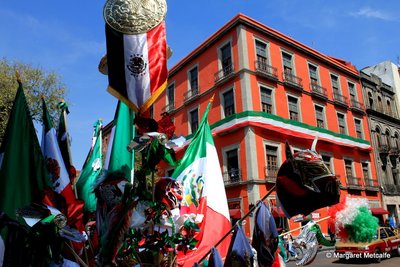 Building in the Centro Histórico 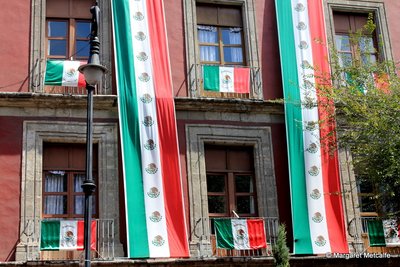 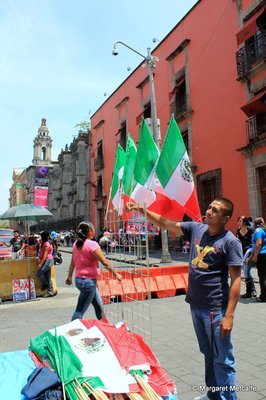 Vendor in the Centro Histórico 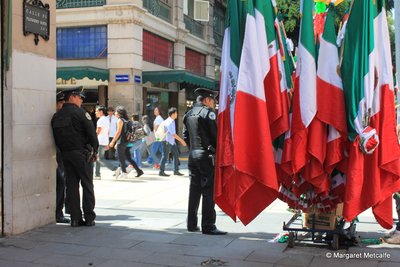 Cars and buses have suddenly sprouted flags and banners, supermarkets and shops are full of festive items and special sweets and food are on sale. Pozole, a traditional soup made with pork and dried corn kernels, will be eaten in many homes. Other dishes are specifically the colours of the flag, such as chiles en nogada. And of course, large quantities of Tequila, mezcal and Coca Cola will be doing the rounds too. This morning, 15th September, schools all over the country will be re-enacting and celebrating the historical event. 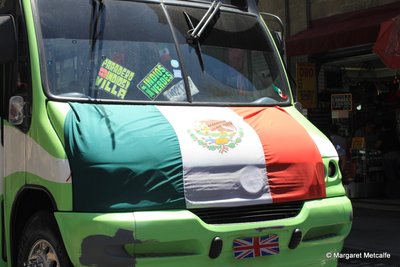 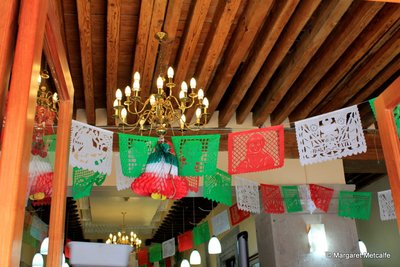 Decorations hanging up in a restaurant 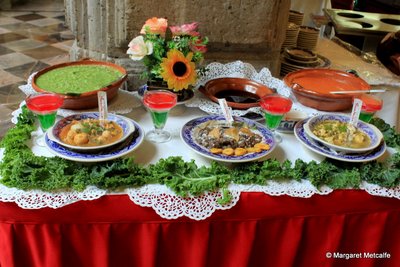 Typical dishes for the Fiestas Patrias 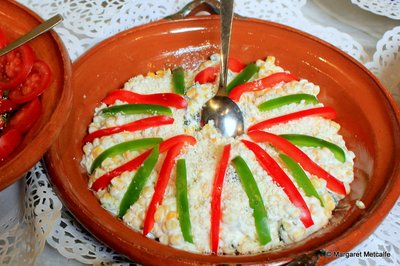 Corn Salad with the colours of the flag 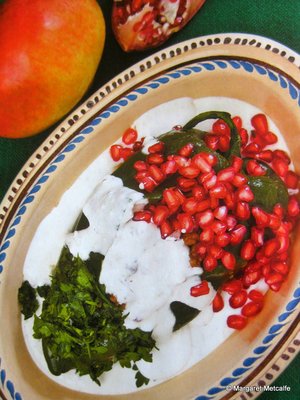 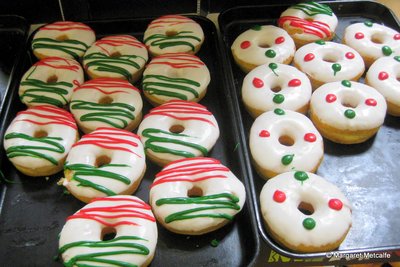 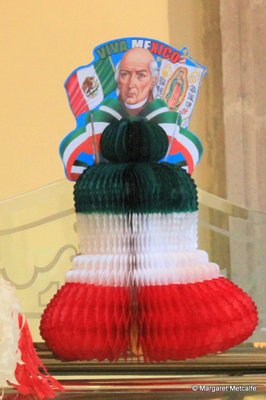 Two hundred and one years ago, in the early hours of 16th September, Miguel Hidalgo, a priest in the small town of Dolores in Guanajuato, rang the church bell to gather the people together and urged the Mexican people to rise up against the Spanish Crown. This was how Mexico's fight for independence started and ever since, on the eve of 16th September, the Grito de Dolores is commemorated in town squares. The largest celebration will take place in Mexico City's Zócalo, which has been duly decorated since the beginning of September with lights and an enormous bell, among other things. At 11 pm tonight, President Calderón will emerge on the central balcony of the Palacio Nacional in the Zócalo and will ring the bell, the very bell that Miguel Hidalgo rang that early morning, and which was brought to Mexico City in 1886. He will shout out El Grito to the thousands of people below in the square: ¡Vivan los heroes que nos dieron patria.! ¡Viva! ¡Viva Hidalgo! etc......until he ends with ¡Viva México!. The crowd will go wild waving flags, fireworks will stud the sky, and the real celebrations will begin! 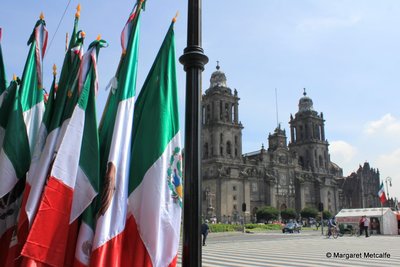 Flags and the Catedral in the Zócalo 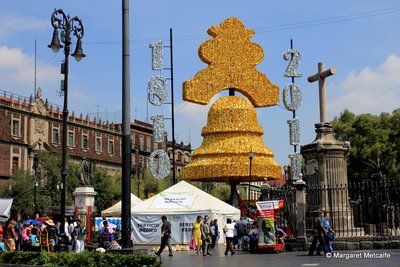 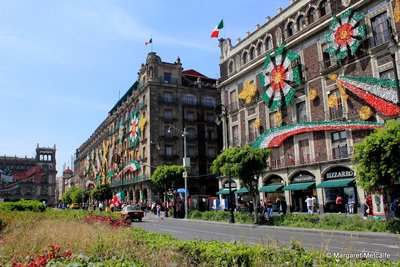 Decorations on the buildings in the Zócalo 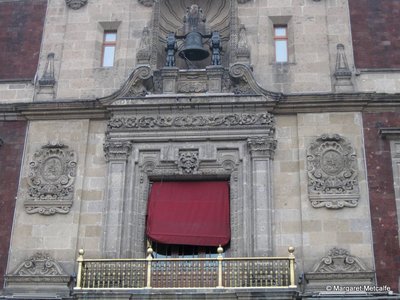 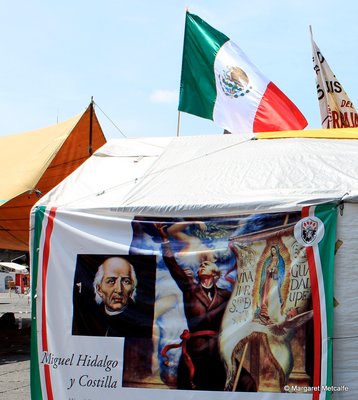 This year, in a climate of escalating violence, the government has issued a general warning over the Independence Day holidays and security will be tight in the Zócalo and in city squares all over the country. Three years ago, eight people died tragically when grenades were thrown into the crowd who had just been cheering to "El Grito" and over 100 were injured. Although three people were arrested, it is commonly believed that the real instigators and perpetrators were never caught. Impunidad, impunity, is a word which appears too often in Mexico's news. This seems to be yet another case.

Green, white and red, the colours of the flag... Green for HOPE, white for UNITY and red for the BLOOD OF HEROES. Let's hope this year that Mexico will unite against violence and that there will be no bloodshed. 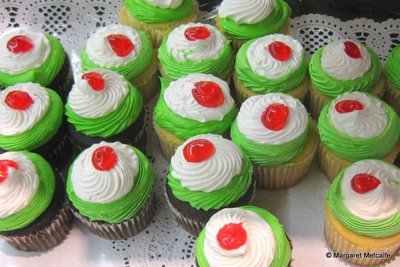 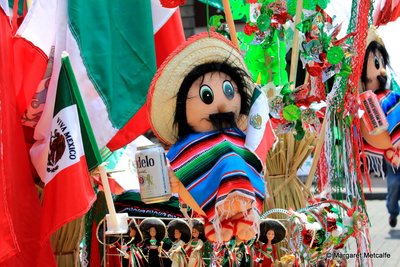 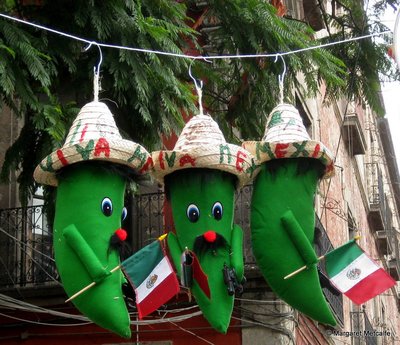 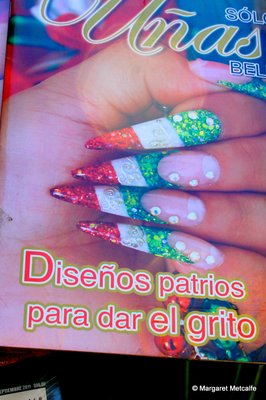 Even ideas for patriotic nails! 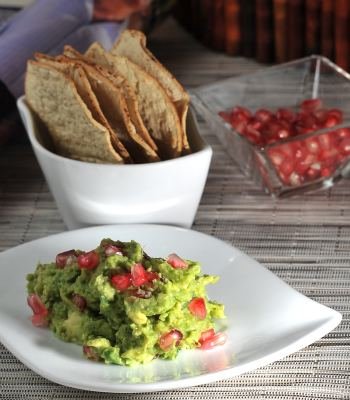 Cut the avocadoes in half. Take out the stone, remove the pulp with a spoon and put it in a bowl. Add the juice of half a lime/lemon and mash it up. Open the pomegranate and remove the seeds. Cut up the onion and chillies very finely. Add the onion, chillies and the pomegranate seeds to the avocadoes. Mix together well with a fork and season with salt. Serve as a snack with totopos or tostadas (Mexican chips).