History through murals.... and cats

History crops up everywhere, in all sorts of places. In Mexico, a very popular way to recount episodes of the country's past history is through large murals. I heard that Diego Rivera, one of Mexico's most outstanding muralists, had depicted scenes from the major historical events in enormous wall paintings at the Palacio Nacional so I decided to go and take a look. Besides, I've always wanted to know what's behind that long façade which lines the east side of the Zócalo, guarded by soldiers. So off I set last Friday morning. 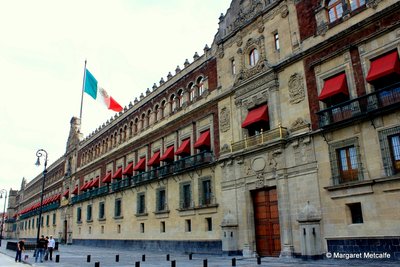 The front façade of the Palacio Nacional 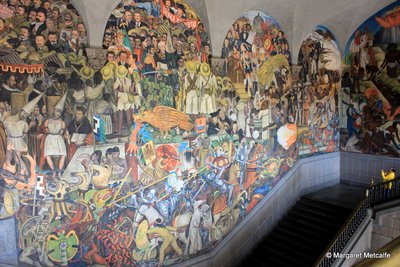 Diego Rivera's mural, "Epic of the Mexican People", in the main stairway 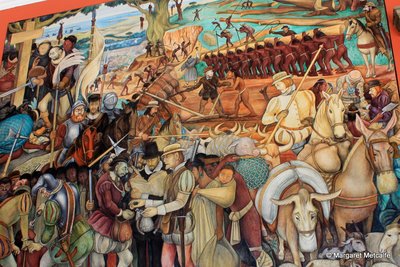 The arrival of Spanish Hernán Cortés at Veracruz 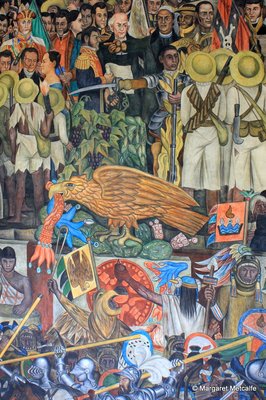 Detail from the main mural

I'm lucky. It's a beautiful sunny day as I wander down Calle Madero towards Mexico City's enormous public square, the Zócalo, which throbs with Mexican life. This is indeed where the city's heart beats noisily. Around the Catedral, hundreds of vendors have set up their bright colourful wares on the pavement, Mexican flags are being sold on street corners in anticipation of Mexican Independence Day on the 16th September and people are pouring out from the mouth of the Metro station underneath the gigantic plaza. I come across some Indians, dressed as Aztecs wearing long feathered headdresses and with seed pods shaking around their ankles, doing some kind of dance to drums and enveloped in incense. A man from the crowd has got carried away and is joining in, doing a jerky dance in his white shirt and suit trousers, much to the onlookers' amusement. A bit further on, an Indian priest wearing very little clothing is carrying out a purification ritual on some bystanders, immersing them in clouds of incense and dusting them down with a sprig of leaves. Catholocism and pre-Hispanic pagan beliefs co-exist in a kind of happy synchretic duality here which outsiders find hard to understand but which Mexicans view with total normality. After all, it's their own particular brand of religion.

I haven't even reached Rivera's murals but here I am, standing right inside a scene representing some of Mexico's main historical events... Aztec Indians and their rituals, the ruins of the great Tenochtitlán pyramid temples just metres from me, the enormous colonial Cathedral and other buildings around the Zócalo reminiscent of when the Spaniards came and destroyed the Aztec city, exporting Catholicism to this continent, the colonial buildings around me decked out with lights and symbolic decorations ready to celebrate Mexican Independence from Spain, and modern-day residents going about their daily business. Yes, hundreds of centuries of history are layered here right in front of my eyes in the Zócalo. 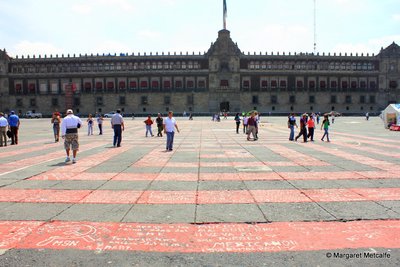 The Palacio Nacional lines the east side of the Zócalo 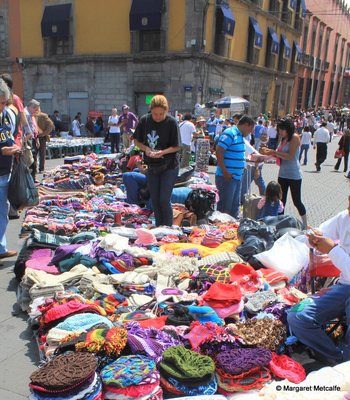 Vendors in the Zócalo 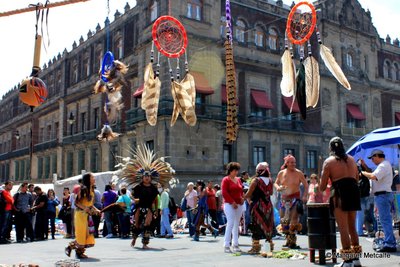 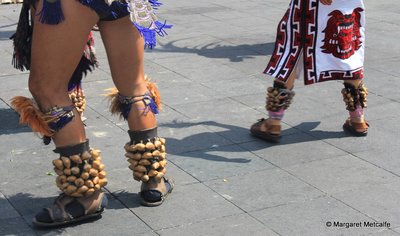 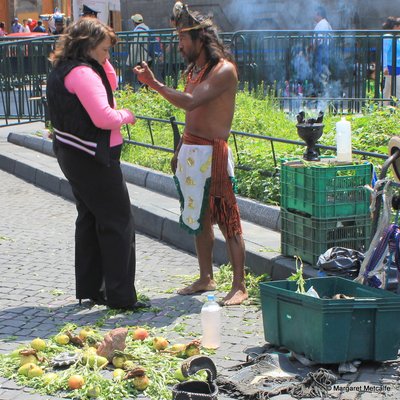 I hope the queue isn't too long to get into the Palacio Nacional. Sometimes, it wraps itself around the corner which probably has a lot to do with it being free of charge to enter the government building. To my surprise, no-one is waiting today. Obviously, visitors have other things to do which I'm rather pleased about. The guard at the gate asks to see inside my bag. No se puede entrar ni con bebidas ni alimentos, he informs me. No food or drinks. "But I've just bought this bottle of water", I lament. "OK, just don't take it out and drink it inside", he says smiling. You see, there are some pleasant friendly soldiers after all.

The Palacio Nacional is where those who held power over Mexico lived and governed until recently, including the Aztec rulers, the Spanish viceroys and the Mexican state leaders. When the original palace built by Moctezuma II, the Aztec ruler, was destroyed by the Spanish, they used the very same stones to erect this building which then underwent further changes by the Mexican presidents. I guess it represents the Mexican people quite well, a blend of Aztec, Indians and Spanish.

What I see inside is nothing like I have imagined the interior of this place to be. There's a large open courtyard, surrounded on all sides by buildings. Where did the President have his office? Where is the treasury? I wonder. Until recently, this is where it all happened. A cactus garden, grassy areas, trees, one or two sculptures, arcades and walkways... it's a haven of peace since there are very few people around. And what most surprises me are the cats lying around everywhere, some having a cat nap in the bright sunshine while others are semi-comatose, totally oblivious to my attention. Under the arches, strategically placed, I can see small clean bowls of cat food so these visitors or residents are obviously welcome. I didn't expect to see cats at the government palace, I think to myself. Cats and gardeners seem to outnumber everyone else here. 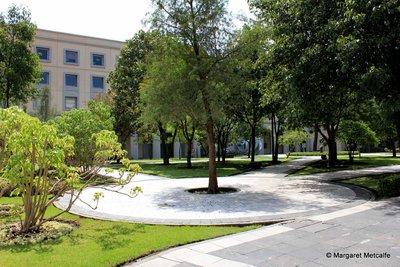 Gardens inside the main courtyard of the Palacio Nacional 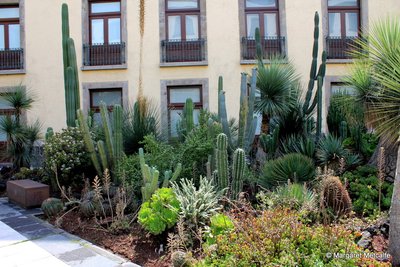 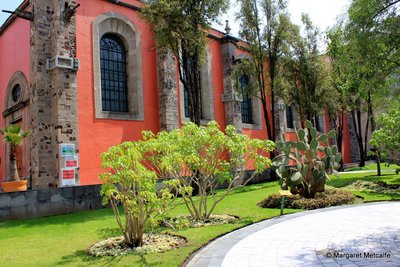 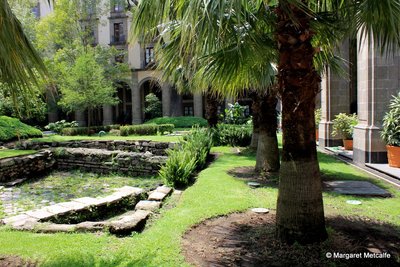 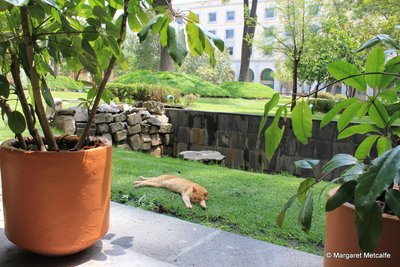 A dozing cat, an unlikely resident 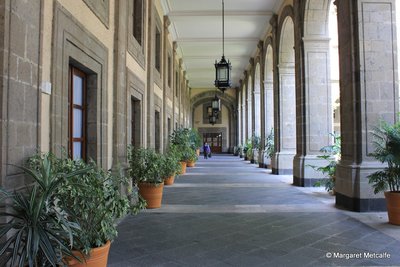 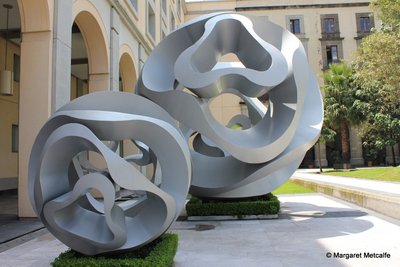 Sculptures in the Palacio Nacional

I walk through one of the archways and emerge into yet another interior paved courtyard, overlooked by a colonial building which reminds me of a three-tiered cake. At the centre of attention splashes a lonely fountain with a flying horse on top. That's when I see the murals, up the main staircase and peering out from the arches on the first floor. I make my way over to the stairs and find myself immersed in a pictorial display of Mexico's history, told by Diego Rivera in his "Epic of the Mexican People", painted between 1929 and 1935. I see the Aztecs, the conquistadores españoles, Father Miguel Hidalgo and other Mexicans who led the struggle for Independence. There are so many characters, some I know, others I have no idea about, and I'm actually rather tempted to look for "Oor Wullie" or "Sammy the Sheep". One person I recognise is Frida Kahlo, Diego Rivera's wife and renowned Mexican painter.

It is said that Rivera helped in the creation of a Mexican identity and "unified" Mexico with his murals, a people long fractured by history, language, racism, religious and political schisms. He included everyone in them, from the humble Indians, to the great Aztec ruler Moctezuma II, those involved in the struggle for independence or taking part in the Mexican Revolution. What he was saying was, you are all Mexicans, this is the land of Mexico we are proud of, a people united into one society with a common past. 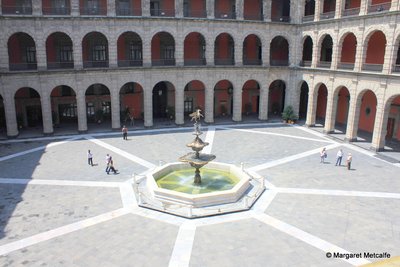 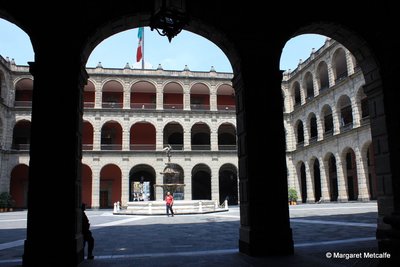 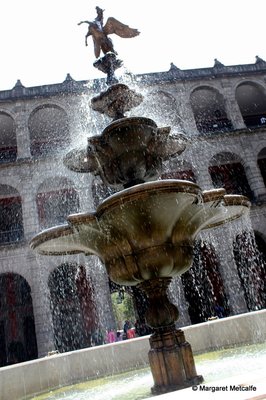 Fountain in the centre of the courtyard 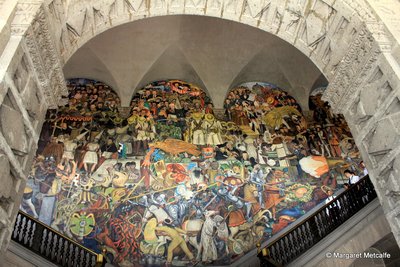 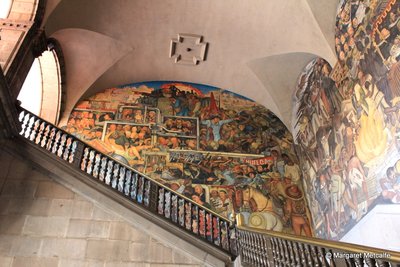 The murals are packed full of historical events and people 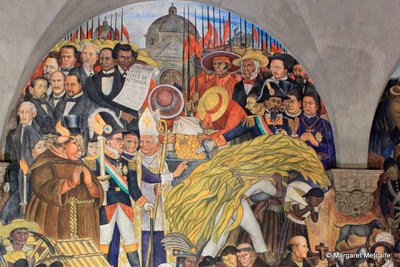 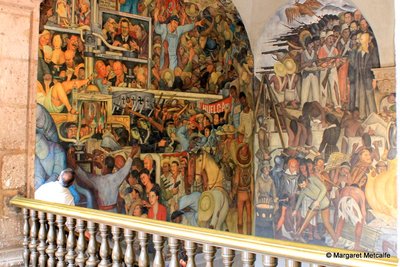 Man looking at the mural 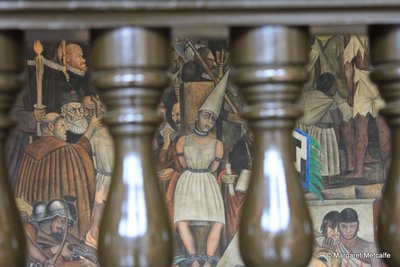 A gruesome detail of the brutality of the Conquistadores 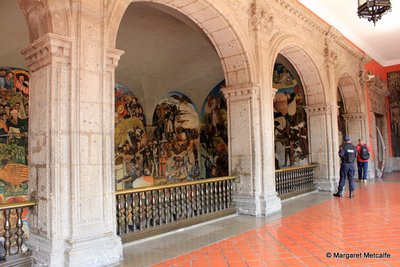 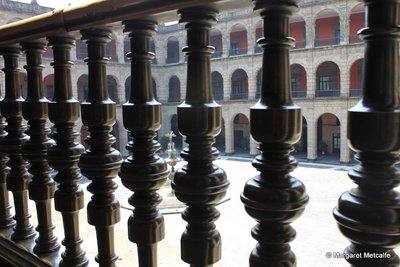 Looking through the balustrade of the first floor 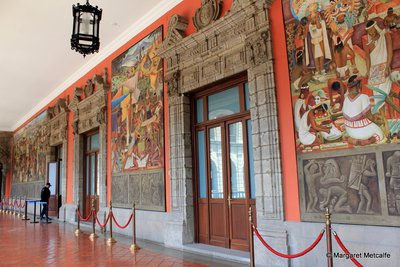 Rivera's murals painted along the walls of the first floor 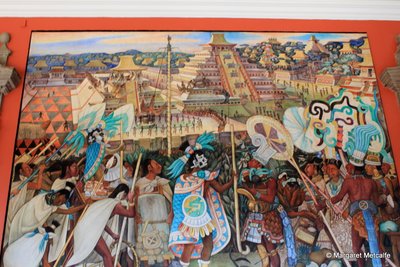 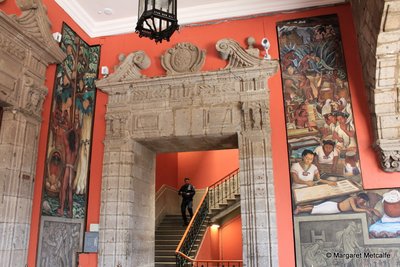 Murals around the door

I leave the Palacio Nacional amazed at Rivera's ability to paint these huge murals bulging with hundreds of people, with history, with colour and with meaning. I merge into the noisy cacophany of life going on outside in the Centro Histórico and reflect on the events and people that this geographical place has seen over the last 2000 years. It isn't too hard. I've just seen it all in the paintings inside.

And now I also know what's behind the façade of the Palacio Nacional..... Cats. 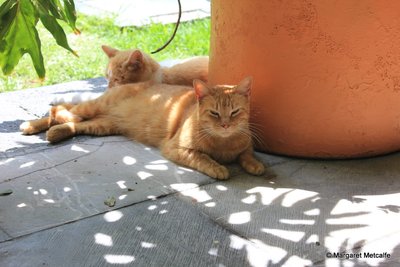 Posted by margaretm 07:35 Archived in Mexico