Back in Mexico City in the rain 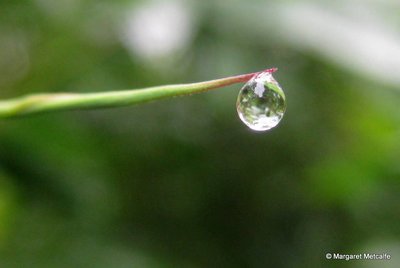 A raindrop remains after the rainstorm

We're back in Mexico City. Once again, our lives have been tightly knitted into the routine, traffic, chaos and way of life in this megalopolis. Schools are back in full swing, as is road congestion and the rainy season. The city has undergone a transformation... the heavy rains have turned it into a luscious botanical garden, literally dripping with greenery. Chapultepec Park is smiling again, happy that the green carpet has been laid out again under its trees. Our garden was unrecognisable when we got back. Its hair had grown so long, I had to get the shears and give it a decent haircut so we could see where to step.

Yes, this is the rainy season. Most days, in the afternoon, the clouds well up in the sky and gradually turn a dark shade of grey, or brownish grey, brewing menacingly up above us or around us. The mountains slip out of view and so do the neighbours and the lighting goes dim. Then all of a sudden, the clouds burst all over us. Sackfuls of heavy raindrops and sometimes, hundreds of thousands of tiny balls of ice, clatter down on the glass of our skylight, deafening us inside the house. The heavenly ceiling cracks with streaks of lightning and shatters with noisy claps of thunder. From the house, the car or under the umbrella, we watch the rain beat down, streaming down in solid curtains, running downhill trying to escape somewhere. It turns the roads and paths into swollen rivers until the drains can swallow it all up, much later. More often than not, lakes and canals appear which aren't marked on the map, staying for days.

I think the dry lake bed that Mexico City is built on is becoming a lagoon again. And that's not good news for the people who live in places like Cuautitlán and Teoloyucan. Year after year, the rivers overflow and fill up the streets, barge uninvited into the houses, wash everything away and the residents are left to stare in dismay at the damage and loss. The police paddle up their roads in lanchas, unable to help. The politicians visit them, commiserate, make promises they never keep but no solution appears in sight. They are poor. If it happened in another richer area, heaven and earth would be moved in record time to stop it from happening again. This week Cuautitlán and Teoloyucan have been declared a disaster zone and the residents have been informed that the floods will be staying around for another two weeks.

The rains also damage the roads and streets whose tarmac is now grotesquely pockmarked. Huge chunks are missing, gaping holes appear in the roads overnight, and drain covers disappear exposing the dark, smelly underworld beneath this city. A murky cavern appeared in the middle of the street not too far from our house. Luckily someone had the foresight to put a fluourescent plastic cone nearby to warn us motorists. When I passed by, I couldn't even see the bottom of the black hole and shuddered at the thought of what would have happened if my little car and I had been inadvertently swallowed up. I imagined a nightmarish scene of us being carried off down the raging sewers into a shadowy netherworld and ending up somewhere under the Zócalo. Ugh!

Rain, storms, hail, thunder, lightning, floods, a soggy mess, greenery.... This season brings good and bad news. At least let's hope the water table under the city and the reservoirs are filling up so that when the dry months arrive, we have water to keep us going. 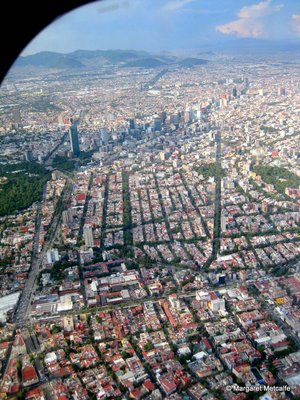 Flying in to Mexico City on a bright dry day 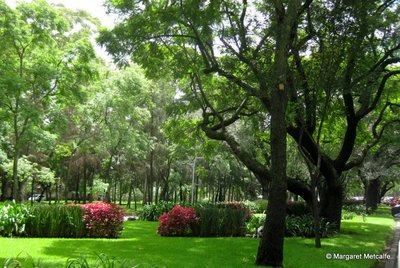 Luscious greenery in the centre of Paseo de la Reforma 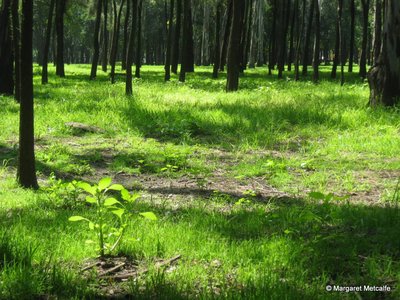 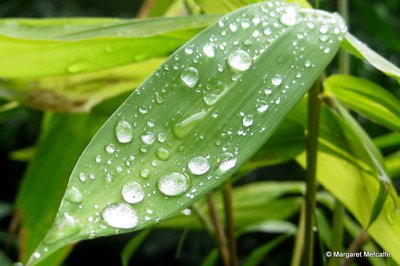 Early morning raindrops on a leaf in the park 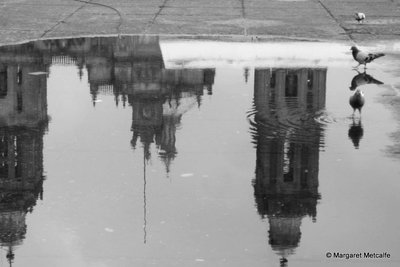 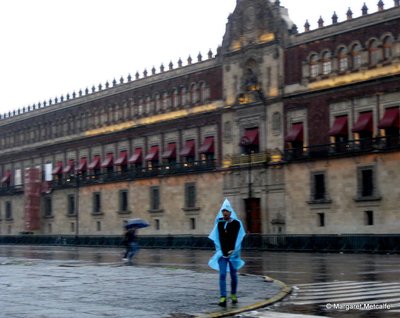 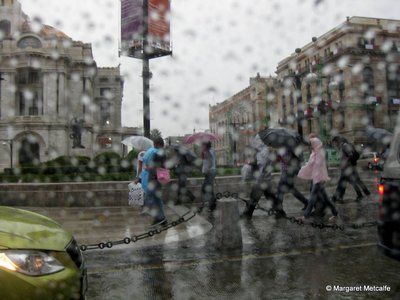 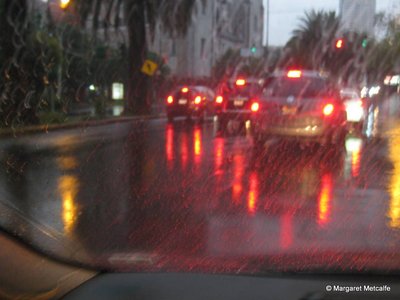 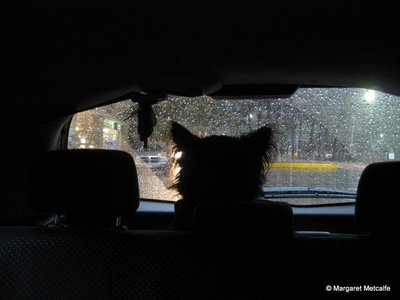 Our dog, Ozzy, looks out of the back window of the car through the rain 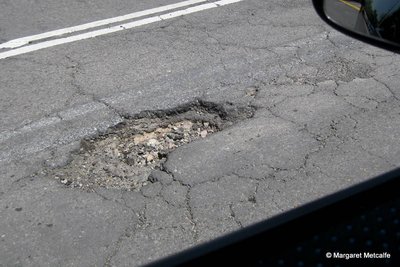 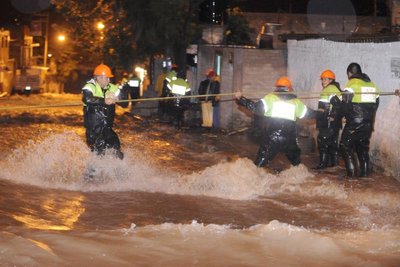 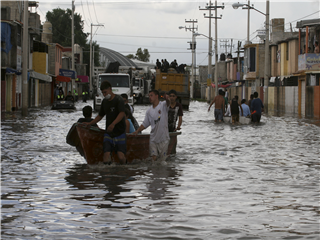 Sailing up the flooded street in a boat

Posted by margaretm 05:01 Archived in Mexico