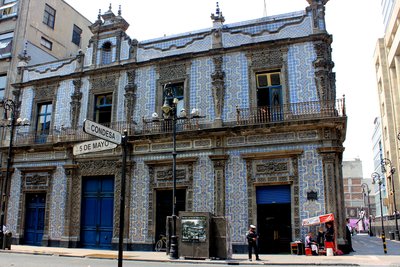 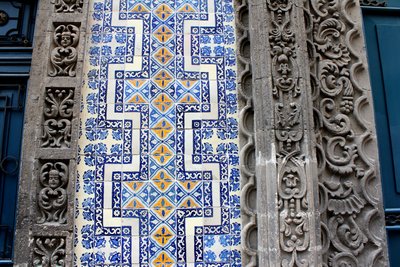 Tiles aren't just for lining bathrooms. Occasionally, someone gets the rather excentric idea of covering the outside of their house with them. From top to bottom. As in the case of the Count and Countess of Orizaba, owners of a 16th Century palace known then as the Blue Palace, in Mexico City's historic centre. In 1737 the Countess had the exterior of the palace covered in blue and white tiles and its name changed to the Casa de los Azulejos (the House of Tiles). Far from looking like an outdoor bathroom, it's a stunner. And the great thing is, that since 1917 when the Sanborn brothers acquired it for their chain of restaurants and shops, anyone can enjoy a meal of typical Mexican food or just sip a coffee there.

It's easy to locate this building. Glance up and when your eyes alight on the easily recognisable shape of the Torre Latinoamericana, once Latin America's tallest skyscraper, the House of Tiles stands a few metres from it on the other side of the now-pedestrianised Calle Madero.

Yesterday I had promised to take a friend of mine who was new to life in Mexico City on a tour of the Centro Histórico and show her something of the old colonial part of the city. First stop, Casa de los Azulejos. 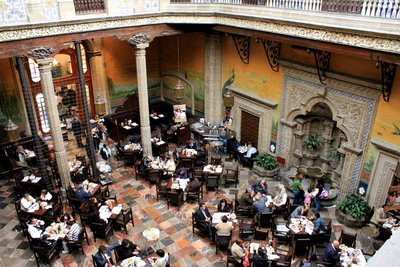 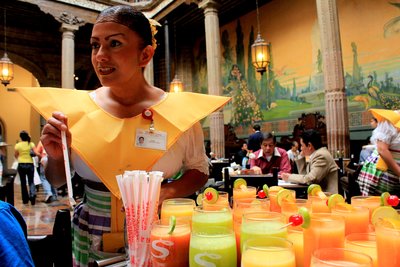 My friend, an interior designer and mosaic fan, was visibly impressed when the Casa de los Azulejos came into view, its entire façade covered in blue and white tiles with occasional flecks of yellow. She was even more surprised by what she saw inside - a covered central patio or courtyard, slightly Moorish in style, featuring a large fountain decorated in mosaics and surrounded by columns. On one side is a large decorated staircase, complete with a mural by the Mexican painter José Clemente Orozco, leading up to the second floor, and supposedly the scene of a grisly murder. From upstairs you can look down on the restaurant tables and smell the aroma of Mexican cuisine wafting upwards. If you look carefully, the upper gallery and second floor seem slightly drunk, leaning different ways, due to the toll of earthquakes and the notorious soft ground in this area.

We had frothy cappuccino coffee and some warm cinnamon bread, in the company of chatty chilangos, residents of Mexico City, who seemed more interested in their food or conversation than the impressive interior. My friend and I spent most of our time gazing around in amazement, commenting on the wall paintings and mosaics. All in all, it would be hard to find a better place to spend a morning in the company of friends and in a truly unique atmosphere.