The afternoon I had the mountains to myself

A flying visit to Vallter 2000 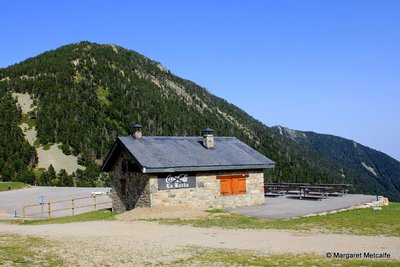 A beautiful quiet day in the Pyrenees

July weather in Spain is supposed to be hot and sultry. You know it's July when you can feel your skin blistering in the midday sun, when your appetite goes on vacation and anything chilled is worth drinking. It's the time of year when the house remains in a kind of diurnal twilight with the persianas or blinds kept down to stop the sun's fiery fingers from prying inside. When shade-blessed pavements and leafy sanctuaries are the most sought-after spaces and horarios take on an unusual elasticity. In July, hoards of streets and squares remain barren and deserted in the high temperatures as lunchtime stretches from 2 to 5 pm and evening meals migrate to well after 10 pm when cool terrazas fill up as residents and visitors re-appear in their droves. This is the month when the playa and the piscina become sites of mass pilgrimage and salad ingredients are ingested as a delicious cold soup called gazpacho. It's also the time of year when we escape from the heat on the Empordà Plain and go to the mountains for the day.

But none of this happened this July in Girona. The summer was unusually cool, cloudy and damp. The beach was wrapped in towel-clad bathers. Our air-conditioning system almost drifted into early retirement and supper outside in the garden was a decidedly cool occasion. Marc, who usually takes on a semi-amphibious state in summer, hardly made use of the village pool or visited the beach. Cristina's plans to swim in the river with her horse and friends dried up. And I almost didn't get to see the mountains before returning to Mexico for another year.

Our summer holiday in Spain was spinning to a close when, rather unexpectedly, I managed to scrape together a few hours one afternoon to make a fleeting visit to the Pyrenees. I pointed the car towards the mountains and off we set to higher altitudes. The road passed through La Vall de Bianya and then began to climb, a thin ribbon threading its way through the exceptionally green, hill-strewn countryside. Chugging merrily upwards, my car ducked through the last dark tunnel, almost 2 kms long, and then we popped out on the other side of the mountain to patches of blue sky. One thing struck me. We had seen only a few other vehicles en route and that wasn't at all normal for this time of year. Had the cool, damp weather kept holidaymakers away from the mountains? 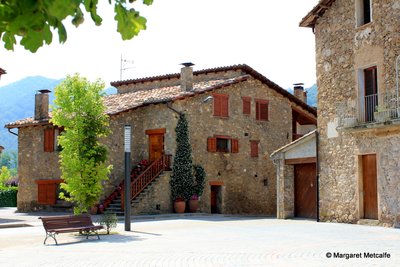 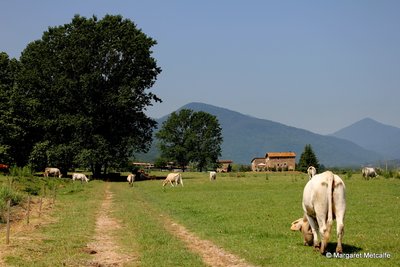 I breathed a sigh of relief when we arrived at Camprodon. It wasn't exactly swarming with people but it did have a perky feel to it. I love Camprodon. With its distinctive 12th-century bridge spanning the energetic River Ter, its stone houses with balconies and welcoming cafeterias, it suits every season. In the winter, people wander around in thick jackets and hats, their breath solidifying white in the crisp mountain air and the smokey smell of crackling pinewood fires curls upwards. Skiers heading for the snowy slopes above and other visitors stop off here to warm up in the steamed-up cafés and sample the local delicacies. In the summer, walkers and tourists cross the bridge, peer into the shops and sun themselves in the plazas ablaze with smiling flowers. And all year round, small shops have thick fringes of fuet, llangonissa and other kinds of sausages hanging over piles of mountain cheeses and other local produce. Typical cerditos de mazapán, pig-shaped marzipan sweets, turn their snouts up in the windows, snuffling among boxes of Birba biscuits. Leather and sheepskin garments and furry slippers line shop doors and walking boots and sticks shuffle impatiently, waiting for outdoor lovers to purchase them. The smell of coffee wafts down the cobbled streets and the sound of the rushing river accompanies you wherever you go. The locals, meanwhile, get on with their daily life, privileged to live here. 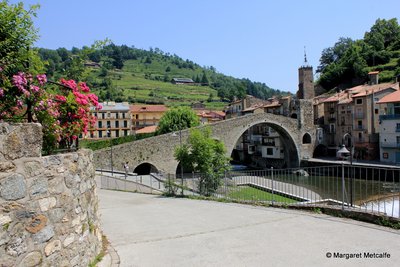 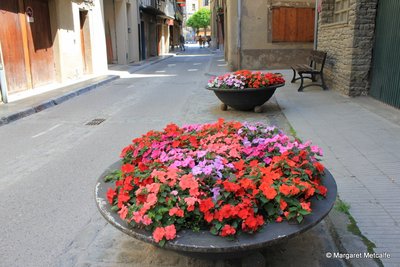 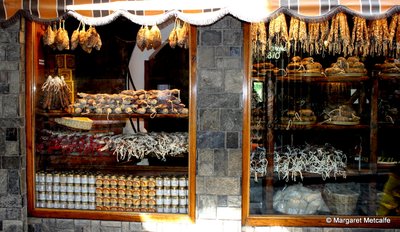 Sausages hanging up in shop window 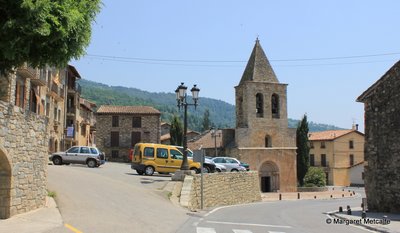 We continued on, up through Llanars with its 12th-Century Romanesque church, and on to Setcases. The name Setcases in Catalan means "Seven Houses" but there are more like 70 stone houses and holiday apartments now with a harmonious topping of red tiled roofs, grouped around a small church on the left bank of the river. Normally full of holidaymakers in search of fresh mountain air and outdoor activities, it was exceptionally quiet and empty that afternoon. A bit further on, I made a brief stop to clamber over the smooth boulders along the banks of the young River Ter and photograph the wild flowers. Normally this spot is taken by picnickers but there was no sign of anyone. Next the crinkly road zigzagged steeply up the mountainside to Vallter 2000, the ski resort. My car revved its engine, dropped down gears and wheezed uphill, slowing to catch its breath at the hairpin corners. It was a lonely climb, with no-one else for company, except a family of mountain goats who froze in surprise when we suddenly appeared. At the top, I parked in the total silence. Somewhere in the enormous space between the only two other parked cars. For the very first time, I had Vallter 2000 all to myself, with its immense sky towering over me and its mountains encircling me. France lay just the other side of the rounded peaks, within walking distance. The chair lifts hung paralysed in the air, the cafeteria and shop were closed, and no-one was to be seen anywhere. 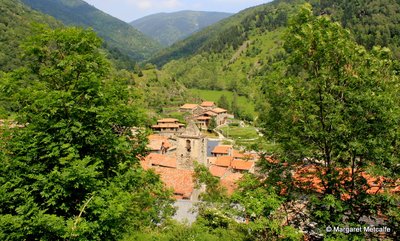 Setcases, a picturesque village nestling in the Pyrenees 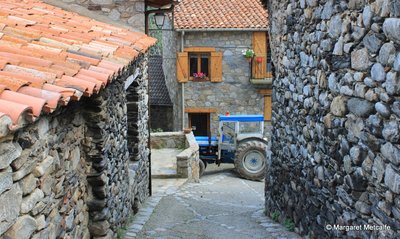 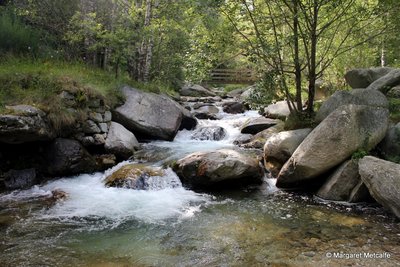 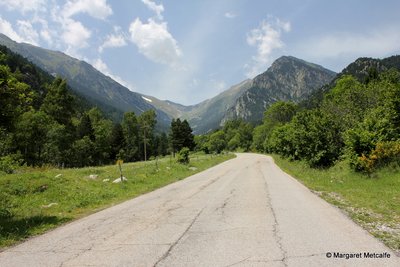 The mountain road up to Vallter 2000 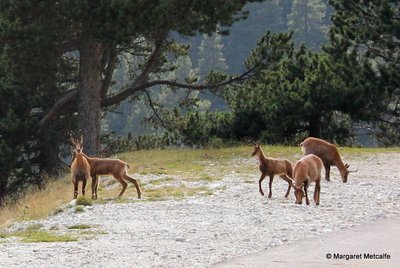 Mountain goats surprised to see us 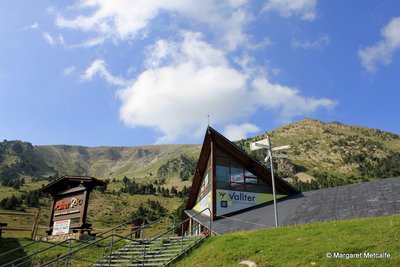 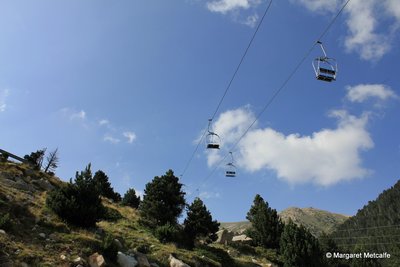 Chair lifts suspended in the sky

The weather was perfect so I decided to hike up the mountainside, past some cows with melodious bells tucked under their double chins, through a flock of grazing sheep and lambs with twitching tails, and up to where a mountain horse was busy cropping the grass. I was close to where the River Ter sprung to life before it playfully gurgled and tumbled down the abrupt mountainside. It would then splash down through Setcases and gush under the bridge at Camprodon before gliding through Girona. A sound took me by surprise. Two cyclists came into sight and sped downhill before I could even focus on them. 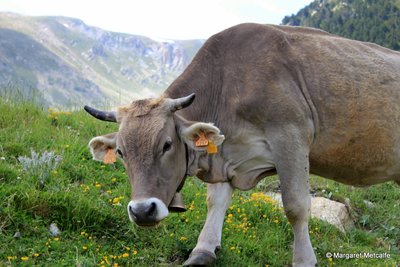 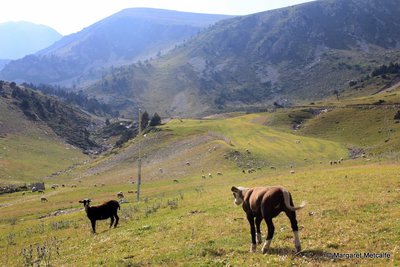 Sheep grazing in the mountains 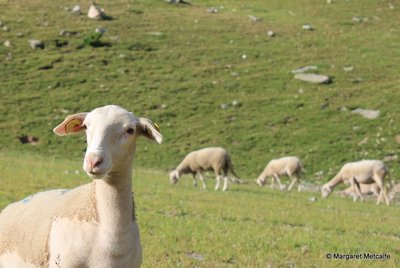 A curious sheep stops to watch me 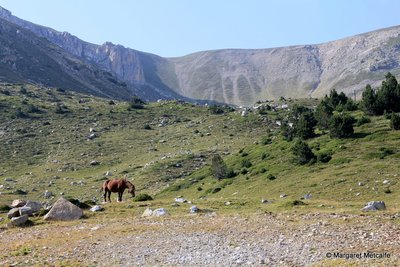 Horse high in the mountains

Just then another sound ripped through the silence. My mobile phone rang. "Mum, we're just leaving Barcelona on the train. Can you pick me up at Figueres Station in an hour and a half?" "Of course!" I replied, wondering how on earth I'd get there in time. I raced down the mountainside, jumped into the car and we chased the road downhill all the way, through the tunnels, and to Figueres. I made it just in time. 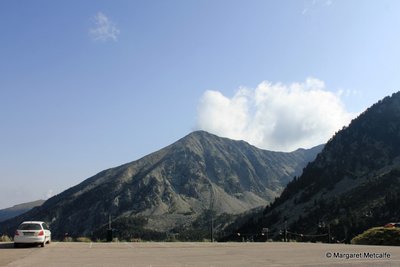 My car all alone at the top 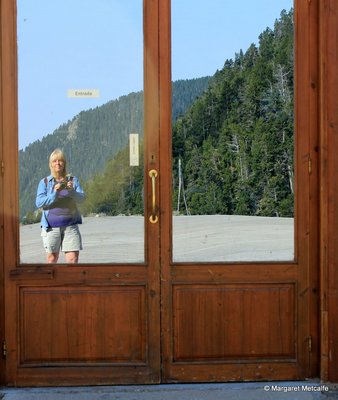 Posted by margaretm 05:08 Archived in Spain