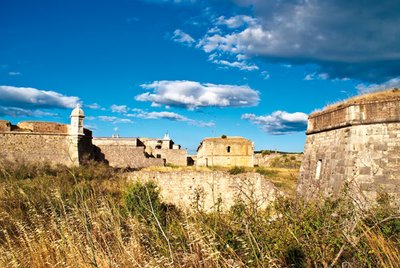 A newcomer to Figueres, I was wandering around the streets one crisp, blustery day when I noticed a sign, not too far from the Dali Museum, pointing the way to a castillo up on the hill. There's a saying that "An Englishman's home is his castle" and I'm convinced that British people have something in their genes which makes most of them appreciate castles, especially Medieval ones, probably since our history and collective memory is plagued with invasions and seiges. We have this kind of romantic idea lurking in the back of our minds of Ivanhoes and Robin Hoods and Scottish clans which goes hand in hand with toothy ramparts, imposing towers and creaky drawbridges. So when I saw the sign Castillo de San Fernando (Spanish) or Castell de Sant Ferran (Catalan), I have to admit that I had visions of a typical English castle and was eager to visit it.

I strode enthusiastically along the long slope leading up the hill which overlooked the town, anxious to see this site. At the top, there was no sign of a castle, at least I couldn't see anything except two white sentry boxes and a road disappearing round a corner between two grassy slopes. The soldiers on duty made it clear that no visits were allowed so my curiosity was left wholly intact. To the right, a path climbed up the bank so I followed it. That's when I began to see what it was all about. It wasn't so much a castle, but an immense low-lying fortification crouching down on the top of the hill, wishing to remain unseen. On the other side of the bank I looked down into a moat, not filled with water but grassy green, trapped between stone walls and other defence structures, some sprouting a dishevelled hairdo of grass. If these stones could talk, what would they tell me? I wondered. My curiosity got the better of me and I continued along the path which made its way around the outer perimeter wall, in a spiky star-like pattern. To my delight, this turned out to be a blowy, 3 km walk around the entire fortress, with views over the town and the nearby countryside. I was in good company. Athletic young sportsmen overtook me running lightfooted, older ladies in pink tracksuits ambled along unhurriedly, girlfriends chattered intensely two or three abreast, youngsters were sitting on the grass wired up, grandparents were picking flowers. To them, the castillo was a place to get exercise, breathe in the fresh air, chat with friends. That was my first encounter with this immense hidden monument. 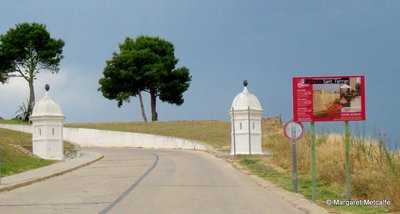 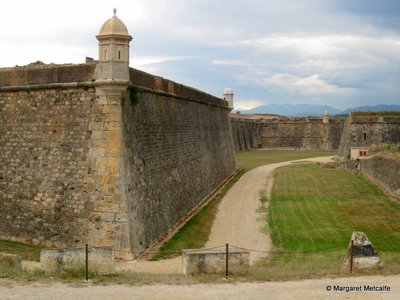 Doing the rounds of the castle became a regular activity when a month later I changed my address. The only redeeming feature of my "new" flat was that it was close to the castle and a short walk took me up to the perimeter path so I could go for some early morning exercise and greet the immense sky above. Apart from that, the furniture was riddled with woodworm, the unsavoury wallpaper produced bouts of nausea and the close co-existence with scores of other neighbours meant all their conversations, music, TV programmes and garlicky cooking shared my flat with me. I stripped the wallpaper off but the other uninvited guests stayed put until Josep and I got married and we promptly moved to another part of Figueres. From the balcony of our 8th floor flat we had views of the dome of the Dali Museum, just metres away and, to my delight, the castle.

I learnt about the history of the Castell de Sant Ferran in a rather unexpected way, through my work with the historian, Señor Juan Manuel Alfaro. He would give me texts of the main historical sites in Catalonia and the Rousillon area of France (once Northern Catalonia) and I would translate them into English. The next step was to record them for his audio-guides or machines which, when you inserted a 100 peseta coin (in the days before the Euro), would give you a splurge on the history of the site in the language you had chosen. At first, we did the recordings down in a makeshift studio in his basement until he moved to some premises down the road. There he built a small soundproofed recording studio inside complete with microphones, red lights and other switches. The rest of the space was taken up by a muddle of an office, chaotic stacks of of historical documents, posters, old audio-guide machines and devices, books, maps and who-knows-what-else, and two cars. The challenge was to make the text recording exactly the same length within a second or two, in all the different languages, no easy task. I usually emerged from the recording studio "cave" blinking my eyes, sucking in oxygen wildly and clearing my throat which felt as if it had been scoured with an abrasive brush.

The text I recorded for the castle shed plenty of light on the castle's architecture and history. Built in the 18th Century to dissuade the French troops from advancing any further into the country, it was the finest and most technologically-advanced fortification of its time...the crème de la crème of European fortresses. No expense was spared. Weapons and warring techniques had evolved so a Medieval castle would have been unsuitable. Instead, a modern castle was required. The Castell had a complex range of defence structures which cropped up in the text as hornworks, bastions, counter-scarps, ravelins, curtain walls... , as well as moats, housing quarters and stables, making it not only the largest monument in Catalonia but the largest 18th Century fortress in Europe, if not in the world. You'd think the tourists would be flocking to visit it. 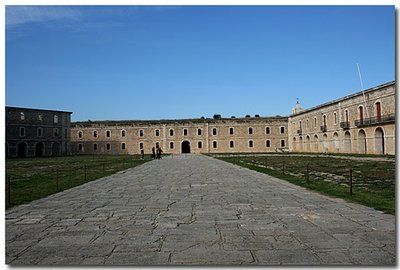 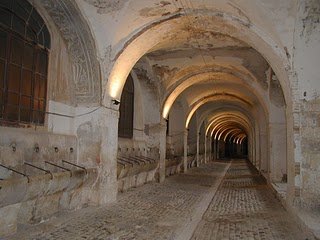 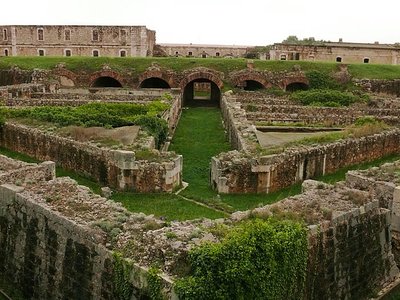 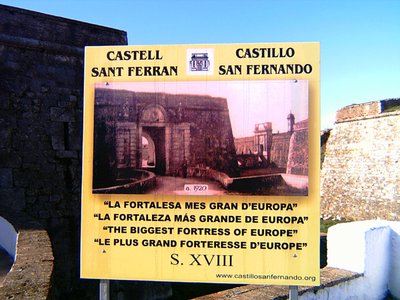 A glance at Sant Ferran Castle in numbers should make your mind boggle at its immense size. And yet despite its gigantic dimensions, it remains largely invisible until you come up close.
- It covers 32.5 acres
- The outer perimeter is 3.2 km long
- There are 5 kms of moats
- 9 million litres of water can be stored in the deposits under the parade ground
- Housing for 6000 men
- Stables for 500 horses 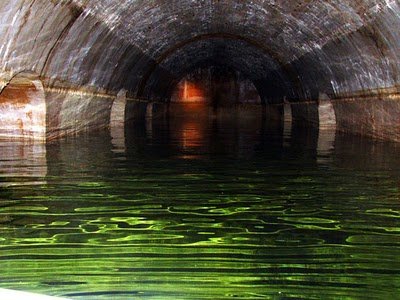 Water deposits under the Parade Ground 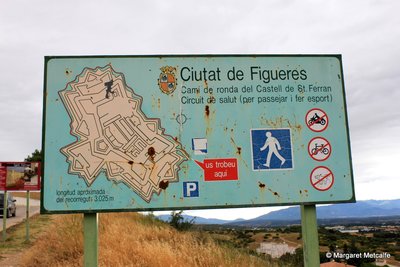 As for its history, the first stone was laid in 1753, with a further 13 years needed to finish the work and it was named after the King of Spain, Fernando VI (Ferran in Catalan). Despite the enormous efforts made in its construction, it rather embarrasingly fell to the French troops almost immediately after it first entered active service, earning itself the nickname of La Belle Inutile or the Useless Beauty. It was later occupied by Napoleon's troops, taken back by the Spanish army for one year and fell to the French troops again. General Álvarez de Castro, who heroically defended the city of Girona during the third seige, died here mysteriously after being imprisoned by Napoleon's troops. Only the castle knows whether it was due to ill health or poisoning. Its rather colourful past also includes it being used as a military prison from 1965 up to 1991. A whole series of people were imprisoned here, ranging from comandants who called for elections and democracy, Jehovah's Witnesses, conscientious objectors (refusing to do military service and whose action led to compulsory military service being abolished in the 1990s) and even Antonio Tejero, the Guardia Civil who burst into the Spanish Parliament brandishing a gun on 23rd February 1981 in a failed coup d'état. He was the last prisoner there and was moved out in 1991, plunging the fortification into an identity crisis until, in 1997, the castle was opened to the public for guided tours and a wide variety of cultural events. 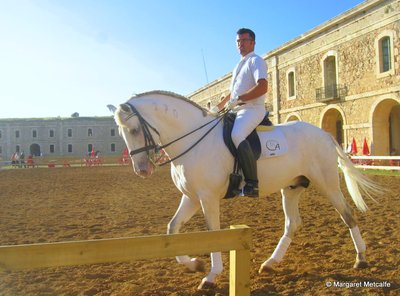 Nowadays, this inconspicuous castle is better known for peaceful, public events rather than conflicts. Digging down deep into my memory files, I remember going there for a summer night concert in the ruins of the church, taking the kids to see the Three Kings arrive there on January 5th, attending the medal presentation ceremony of Marc's basketball team, a visit to a Horse Show (Mostra del Cavall de Raça), and I also recall watching several films being shot on site, including the film El Perfume with local people acting as extras.

Yet, it has to be said that, in spite of this mosaic of activities, this enormous historic castle still remains relatively unknown to the great majority of visitors who prefer to spend hours queueing to get into the Dali Museum, just 800 m away. 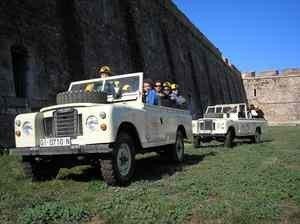 Guided tours including riding around the moats in Landrovers 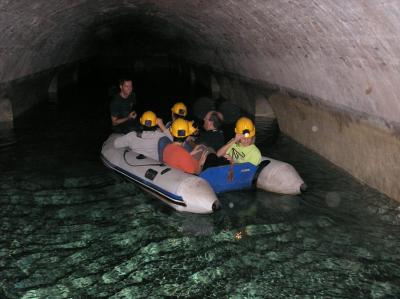 Exploring the underground water deposits in a small dinghy

(Some of the photos were taken from the InternetI)

Posted by margaretm 06:38 Archived in Spain