The man who gave the submarine to the world

What connection does Figueres have with the submarine? 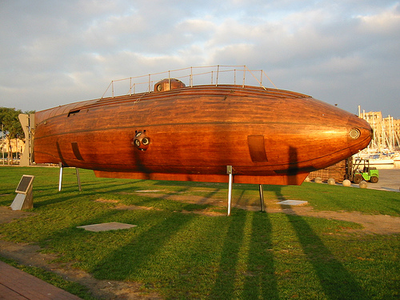 Salvador Dalí may be a household name around the world but Figueres was also the birthplace of another important person who most people have never even heard of. I certainly knew nothing of him until I arrived in the town.

My first teaching job in Figueres was at Casa Anglesa, a tiny language school in Calle Monturiol (Monturiol Street) where the children and teenagers seemed to have a serious allergy to the seats judging by their non-stop bouncing up and down. In between my classes, when I had time to kill, I would wander down to the large café on the Rambla and sip my cortado while preparing my next lesson. That's when I discovered a fairly uninspiring white monument at the end of the Rambla, dedicated to Narcís Monturiol. He also had a secondary school named after him so I supposed he must have been famous or at least done something worth naming a street, a school and a monument after. I did a bit of investigation and discovered a surprising fact. 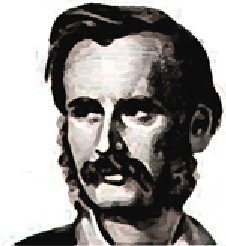 Narcís Monturiol, born in Figueres in 1819, was a poly-faceted Catalan intellectual, artist and engineer who is perhaps best remembered (or maybe not, since few people seem to have heard of him) for being the inventor of the first "real" submarine. At first sight, he seemed an unlikely candidate for producing such an incredible piece of technology since he trained as a lawyer in his early days. When he was around 37, during a stay in Cadaqués, a fishing village clinging to the rugged Costa Brava, he saw a man drown while harvesting coral. This sparked off an idea to build a boat which could navigate underwater and help make this dangerous activity a bit safer. The resulting underwater boat was made of wood, operated by manpower and called Ictineo, a combination of boat and fish in Greek. 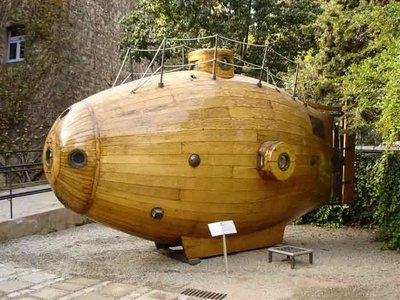 Unfortunately, the Ictineo was smashed by a freighter in port so he built a bigger, improved version, the Ictineo II which was a two-walled submarine with a steam-driven engine. It could dive down to 30 metres and stay underwater for up to 8 hours. Other contemporaries of his were also trying to design submarines for military purposes but most of them went down to a watery grave. Narcis' invention was much more sophisticated and didn't sink like the other ones. Despite his obvious success, the Navy were not interested in it and with little external backing, Monturiol fell into debt. His submarine was the only thing he had when the debt collectors turned up, so it was dismantled and sold for scrap. Sadly, it never went into production and never saved any lives since it wasn't commercially viable. On the other hand, maybe its demise saved the Costa Brava from the widespread destruction of its coral reefs. 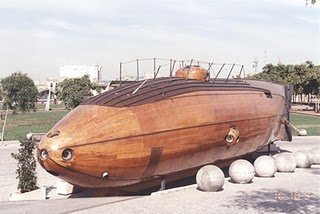 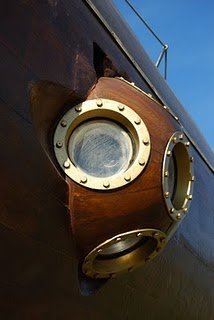 Close-up of a porthole

Several years later, while visiting Barcelona with my parents, we came across a wooden fish-shaped submarine on show in the Port Vell. It was a replica of the Ictineo II, the second submarine designed by Monturiol which had been built in 1993 for the filming of Monturiol, el señor del mar, a biography of this genius and his invention. In fact, it is in Barcelona that due credit is given to him, with information and interactive displays in the Museu de Historia de Catalunya and the Museu Marítimo but it seems that most of the world has no idea who he was. Ask someone who invented the submarine and you are sure to draw a blank look. Well, it was Narcís Monturiol and the interesting thing is that it was inspired, not for military or war purposes, but for a more altruistic reason. Saving the lives of coral harvesters.

The Ictineo II in Barcelona's Old Port in 1996 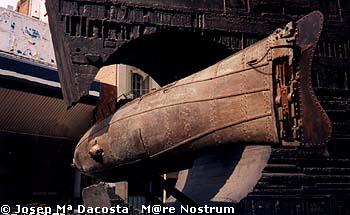 Sculpture by Josep Subirachs in Barcelona, in honor of Narcís Monturiol

Ever since then, I've wondered why there is no replica or scale model of this submarine in Figueres and why Monturiol hasn't been given a more prominent place in his town of birth for his amazing invention. His monument is an understatement, a tall white column featuring three scantily-dressed bodies and his profile with the inscription "Narcís Monturiol, 1819-1885". No reference to being the inventor of the submarine, at least to enlighten visitors. I'm sure many a town would be proud to have been the birthplace of such a man. 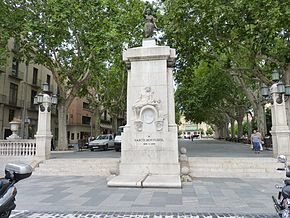 Monument to Narcis Monturiol in the Rambla (Figueres)

(P.S. Most of the photos were taken from the Internet)

Posted by margaretm 11:54 Archived in Spain