In search of a Mr Whippy ice-cream 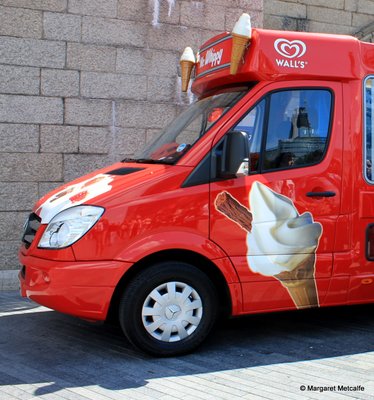 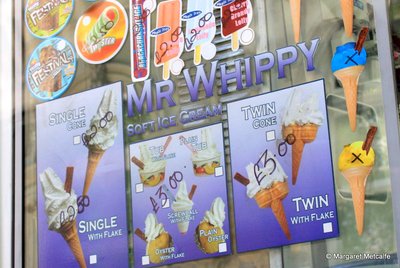 Who's for an ice-cream?

We wandered along the River Thames on the Caversham side down to the children's playground in Christchurch Meadows. Two ragdolls, Rosie and Jim, stared at us out of the window of a narrowboat which had moored along the bank. "Rosie and Jim, Rosie and Jim...", we automatically started singing and laughing. "Do you remember that TV programme we used to watch as little kids?" On to the playground. It had changed considerably and been re-vamped. The sandpits were no longer there. In their place was an exciting new swing which looked somewhat like a long-tailed Chinese New Year dragon. When the three mothers who had been swinging on it had got off, Cristina and Marc ran over to take their place. Meanwhile, I scanned the horizon looking in vain for the ice-cream van. Nothing. No tinkling tune could be heard either. Some white swans and Canada geese were pottering around where the van usually parked, even on cool sullen days like today. No Mr Whippy ice-creams today. We returned home disappointed.

The next day, in Reading, I thought I spied an ice-cream van but it turned out to be a Hot Sausage Company stall. I was beginning to wonder whether the climate change was making a great English summer tradition extinct. Hot dogs instead of ice-creams? Admittedly, the weather seemed to favour the former. It seemed to be a case of global cooling, rather than global warming. But on Friday, as we strolled through Henley-on-Thames, one of our favourite haunts, we at last discovered some Mr Whippy ice-creams. Being served at a kiosk. It was better than nothing but I couldn't help remembering how the ice-cream van used to come around the streets when I was a teenager. We would hear its tinkling tune and could judge which road it was in by how loud the music was playing. When it came nearer, we would run out the house, along with our neighbours, to buy our dessert. It would be a shame if the ice-cream van tradition disappeared, I thought. 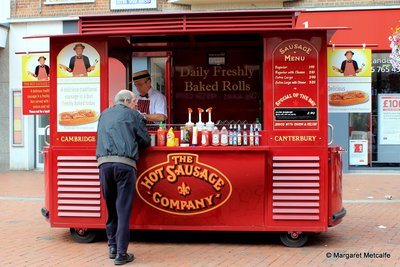 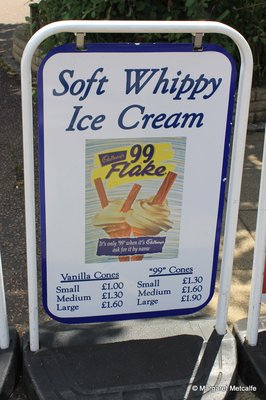 I had almost given up hope when I discovered a surprise in London. We had parked next to Tower Bridge and were making our way to London City Hall to have a bite to eat on the green lawns by the river. Just as we came through the small tunnel leading under Tower Bridge, Cristina shouted out, "An ice-cream van!" Sure enough, there was a beautiful modern van with plenty of people lined up eager to buy an ice-cream or ice-lolly to combat the heat, including a family of Indians in bright saris. Needless to say, after our sandwiches, we bought a Mr Whippy ice-cream cone each with a Cadbury's Flake in it. Twirled up, flaunting its delicious-looking curves and temptingly fluffy, was the creamiest ice-cream I've ever had! And soft, so soft... it simply melted in my mouth. A bite of the chocolate flake bar, then a couple of licks of the ice-cream, another bite and so on. It made my day. 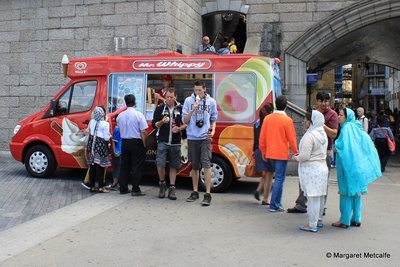 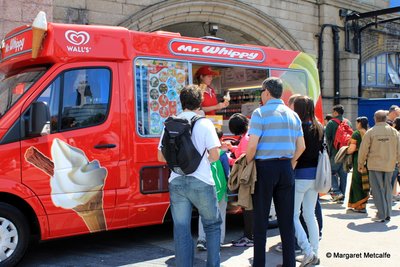 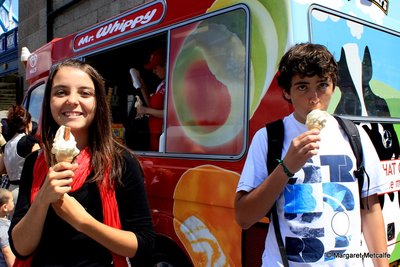 Having crossed over Tower Bridge, we branched off to St Katherine's Dock, a beautifully quiet haven in the middle of busy London with its old barges and other boats moored up. As we headed later for the Tower of London, I stopped in my tracks. There was another ice-cream van parked by the road, dishing out the mouth-watering delight to children and adults alike. A third one was parked along the embankment where the best views of Tower Bridge were to be had. Along with a series of brightly coloured deck-chairs overlooking the river, it looked like a scene from one of the seaside towns along the south coast, not London. In big letters painted on the side of the van, we read "Josef's"..- and he had a second one not far from the beefeater who was kindly guarding the Crown Jewels. 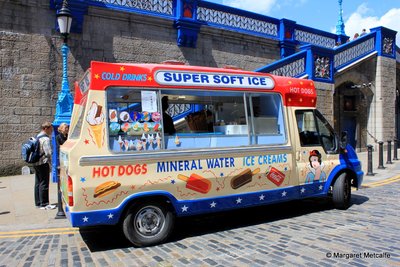 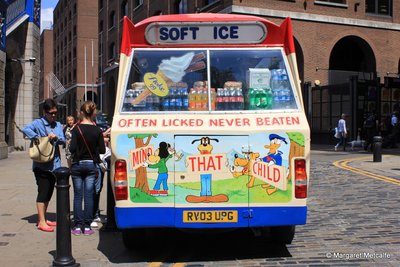 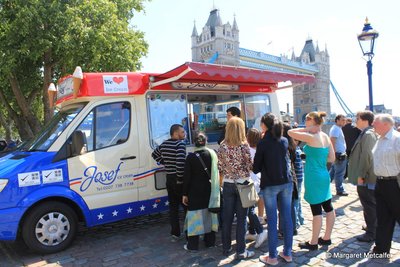 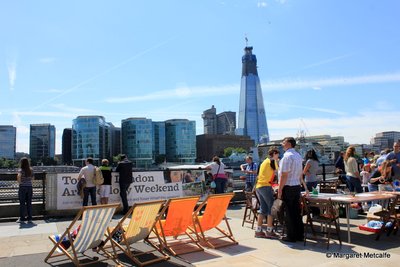 A summer day along the Embankment 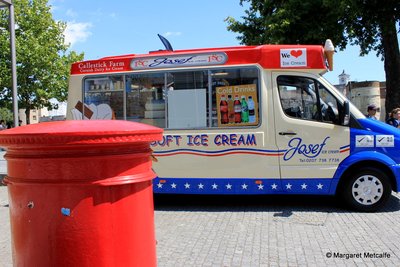 Suddenly, I began to see ice-cream vans cropping up all over the place. Old ones, new ones, with queues. I breathed a sigh of relief... it didn't look like they were becoming extinct after all, at least not in London. A great English tradition HAS been preserved. 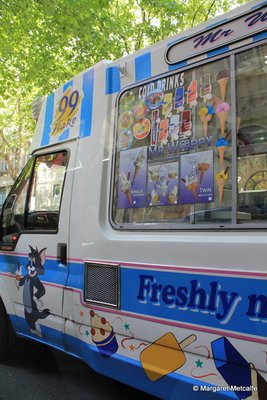 On its way to sell ice-creams 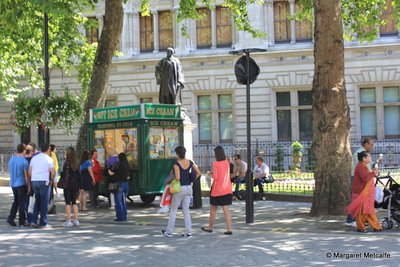 Posted by margaretm 21:37 Archived in England