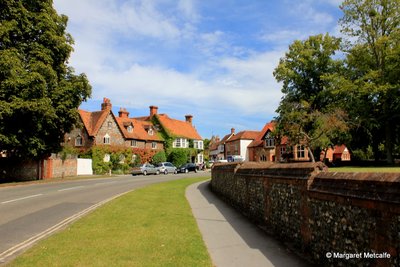 The village of Goring 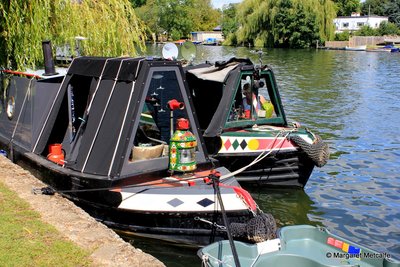 Narrowboats on the river

Last week I was back on English soil again after an absence of several years. During the first few days, the great English summer seemed to be living up to its rather gloomy reputation. Temperatures were cool, verging on chilly, although the English people were stoically bearing up and some were wearing shorts, sandals and sleeveless tops. Skies were cloudy, hiding the sun if it existed, and scattered showers and heavy downpours were likely to surprise us any time.

As we were about to land in Luton Airport, a girl sitting a few rows in front of us on the plane asked a passing air stewardess about the weather. I'm sure she wished she hadn't. “Well, it’s a bit chilly.” We didn’t hear the next question but the answer left us looking at each other, wondering if we’d heard correctly. "It’s going to rain until the 16th of August!” “WHAAAA?!!!” was the poor girl’s reaction. Cristina's expression of mildly disguised panic had nothing to do with the fact that Ryanair's novice pilot had submitted us to a very rough landing. Clearly neither of them had heard of St Swithin's. According to an old wive's tale, whatever the weather is like on the day of St Swithin's, it will continue like that for the next forty days. It must have been cool and damp that day.

It goes without saying that I was mainly looking forward to seeing the family again but I have to admit I felt a twinge of excitement at seeing the cute English cottages with their pretty skirts of hollyhocks and roses climbing up the walls, the hedgerows stitching the fields together, mossy gravestones huddling around spired churches, or the River Thames gliding serenely under the bridges carrying colourful narrowboats along on its back... and, of course, the pleasant green countryside which is clearly the English people’s reward for tolerating their weather. 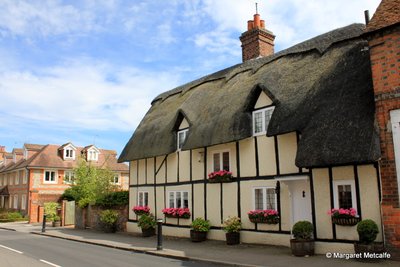 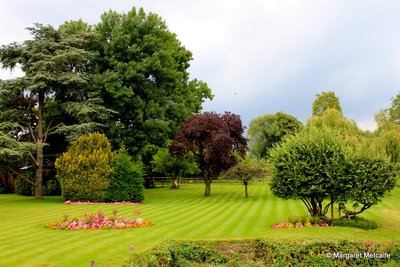 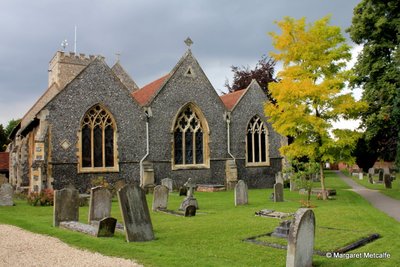 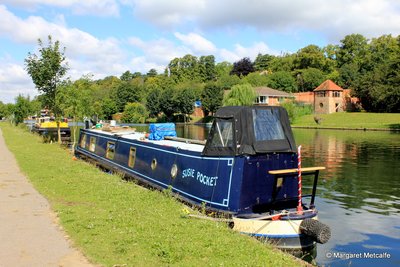 Boat moored along the River Thames at Caversham 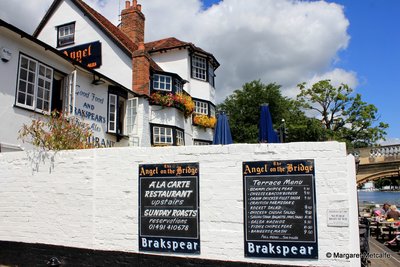 Angel on the Bridge pub at Henley

There is a bit of ambivalence as to how I feel when I go back to England after living abroad for so many years. On the one hand, I find myself re-living my earlier years there, and the many times I took Cristina and Marc there as small children to spend summers or Christmases. The familiarity of places, sights, experiences mellows us. “That’s where we …..!” “Do you remember when we…!” “Look at my old…..!” It’s comforting to come “home” and settle back into certain customs and habits, something akin to slipping on well-worn slippers after a day's hard work. Nice things such as going barefoot in the house and sinking my toes into the soft, long-pile carpet or the smell of a roast dinner cooking in the oven on Sundays. I know I can only be in England when I see those adorable little milk bottles dropped off trustingly by the milkman on the front doorstep. I miss that feeling sometimes.

Then there is the other side. Having lived for so many years in another country and culture, I find England somewhat exotic now. Most English people don’t get that warm, fuzzy feeling when they look at a red post box or telephone box. We do. It sends me running for my camera. As do the picturesque country pubs with their hanging baskets sending cascades of flowers all around the doors and windows.

Part of the experience is to tickle our taste buds again with hot cross buns, Cadbury’s Flake Bars and Dolly Mixtures, with HP sauce and Marmite. We scramble to savour warm crumpets with melting butter or cheese lodging in their spongy insides, creamy blueberry and cherry-flavoured yoghurts, chunky marmalade, cheese-and-onion crisps, tantalizing roast beef and roast potatoes, Yorkshire puddings drenched in gravy or crispy battered fish and vinegary chips. There’s hardly time to reunite with all these long-lost flavours. 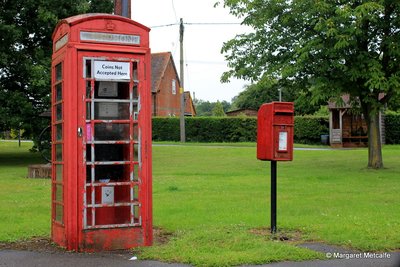 Red telephone box and post box on a village green 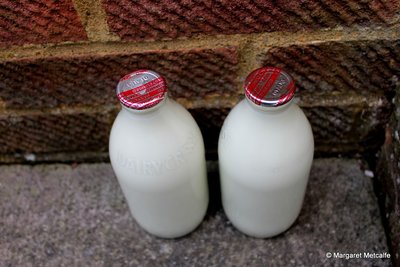 Milk bottles on the doorstep 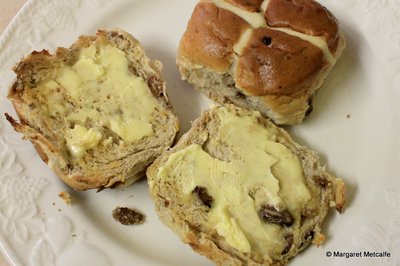 Hot cross buns, usually eaten at Easter, but available all year round now 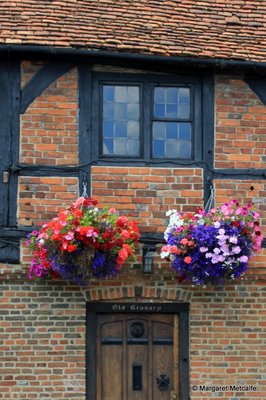 But the longer I live away, the more I realize that a major factor contributing to me feeling a bit of a foreigner in my own land are the idiosyncracies of certain aspects of British life. When I go to get in the car, I’m invariably opening the wrong door. As I drive along, I find myself searching for the gears with my left hand instead of my right one and opening the door instead. I have to mentally concentrate to stay on the “wrong” side of the road and go around the roundabouts the “wrong” way. It doesn’t help that the speed limits and road signs are in miles and not kilometers. I have the sensation that everyone is moving very slowly at 30 because only tractors do that sort of speed back home but have to keep reminding myself that, when converted to kilometers, it is actually 50.

Whenever I return to England, my mental capacities are stretched to the limit as they are required to do so many conversions. Miles to kilometers, feet and inches to metres and centimeters, pounds to euros, Fahrenheit to Celsius, pounds and ounces to kilos and kilogrammes, gallons to litres… the list is never-ending. Is there a reason why the British are SO different, I wonder? Do they do it to make everyone else feel like they are foreigners?

Visiting England also sends our body clocks whizzing wildly forward or backward and dazed. Our digestive systems find it almost impossible to adapt to having early midday lunches or eating supper when in Mexico we'd only have finished eating lunch a couple of hours earlier, at 3.30 pm. They've already been sent into confusion by the iron grip of jetlag and the recent change back to Spanish hours. The English light wakes us up and pulls us out of bed much too early in the morning and doesn't fade into darkness until 10 pm. And the widely-differing opening times of shops, banks and restaurants in Mexico, Spain and now England leave us in a state of disorientation. We have to dig down deep in our memories to remember in which country shops close at midday, and where they are open till late and on Sundays... 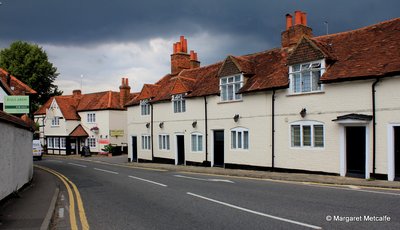 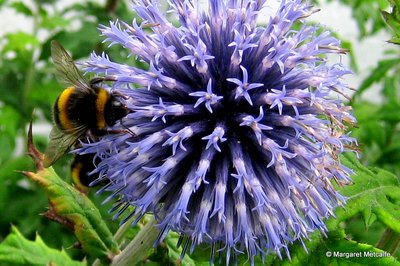 Bumble bee on flower - part of the British summer

But I love visiting England for all these reasons. I actually even begin to feel a bit English again. All these sensations are part of the essence of travelling, of living in other cultures and this is what makes life interesting and varied. As the saying goes, variety is the spice of life and I have to say our life is quite spicy at the moment. Long live the Queen!

Posted by margaretm 23:02 Archived in England