Along the coastal path with the wind in our wheels

I woke up at 5.30 am to the sound of rain beating against the persiana and high-voltage flashes of lightning shredding the darkness. "Oh no, that's going to ruin our plans!" I thought to myself. Turning over, I went back to sleep. At 8 am, dark storm clouds were still sagging over the mountains like heavy, lumpy eiderdowns. "We definitely won't be able to do our excursion today!" Then I looked in the other direction, towards the coast. The wind was frantically shooing the bad weather inland and the clouds were obediently scuttling away. "OK, Marc, change of plan. Let's go and cycle the coastal path between Port de la Selva and Llança!" The change of plan brought about a change in colour. We exchanged green for blue. No lush greenery in the mountains today, but the sapphire blue of the Mediterranean instead. 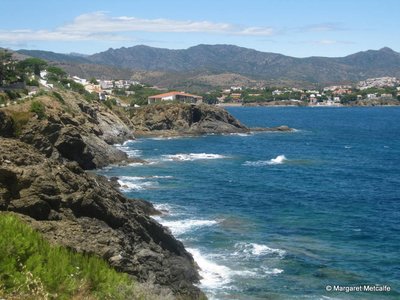 We got in the car and headed for the small whitewashed fishing village of Port de la Selva which hides out in a sheltered bay on the rugged Cap de Creus. To get there, we had to zigzag up the intervening mountain, stopping briefly to gaze down at the Bay of Roses below us. With a strong wind blowing, the view was clear. Despite the distance, you could almost see the holidaymakers huddling in their towels on the beach. It wasn't very warm at all. The bay is an almost perfect semi-circle of sandy beaches and well before modern-day sunseekers discovered it, the Greeks had obviously liked the look of it. They founded the port town of Empúries in 575 BC on a small island which today has become part of the mainland. This settlement was later occupied by the Romans. Some even say that St Paul sailed here when he came to Spain. Who knows? Maybe.. 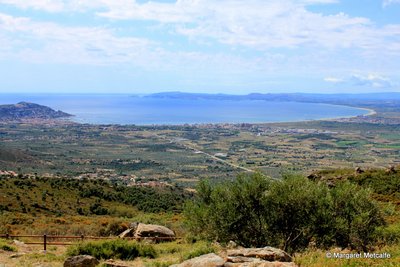 View over the Bay of Roses 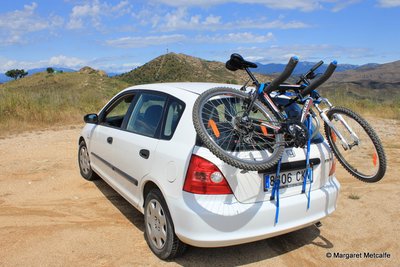 On our way to Port de la Selva

Crossing over the other side of the mountain, we passed by the Monestir de Sant Pere de Rodes, an impressive Romanesque monastery built by Benedictine monks in the 10th and early 11th Century. How they achieved such a masterpiece in what must have been an almost inaccessible place in those days is mind-boggling. Twenty years ago, when I first came to live in this area, it stood on the mountainside totally unprotected or guarded. I was amazed to hear how a large number of people had taken carved stones, capitals and other pieces of the monastery home as "souvenirs". It is said that when a small coffre containing important relics was discovered hidden in the wall of the crypt under the altar and other treasures such as gold and silver coins were unearthed, they decided it was high time to restore the monastery and look after it properly. And it is definitely well-worth a visit. On clear days, the views are spectacular. But perhaps it is in the winter, when the wind howls through the pines, the waves crash against the cliffs below and fog creeps stealthily among the dark shapes of its towers, that this place really leaves a lasting impression. 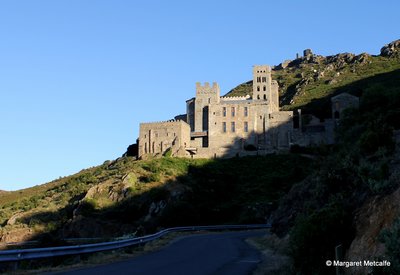 On the far side of the mountain, we were now well and truly in the "blue" realm of the northern Costa Brava, literally The Rugged Coast. Today the jagged rocks were being pummelled mercilessly by the waves of the Mediterranean Sea which collided heavily against them. We parked right on the beach at Port de la Selva, and stood our ground as the breakers raced furiously in towards us, threatening to engulf us, and then withdrew at the last moment to gain force and try again. The salty sea spray drenched our car and marinated our hair and skin in an ocean-flavoured brine. But we were not going to be intimidated. The wind had enticed dozens of windsurfers out into the bay to scoot across the choppy blue expanse and some of them spent more time in the water than up on their boards. We unloaded the bikes and set off to cycle against the wind. 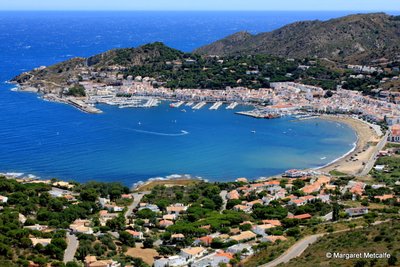 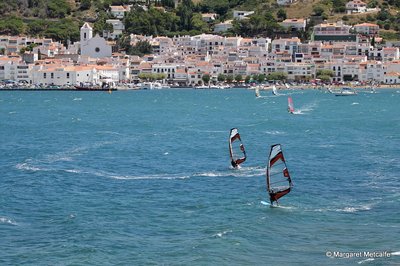 The camí de ronda, the coastal path, had recently been improved with sections incorporating wooden pathways and stone steps up the steepest parts. As if sensing that our excursion would be far more enjoyable with less wind in our wheels, the tramuntana died down leaving the coastline more sheltered than I had expected. In the end it turned out to be almost perfect weather for pedalling, not too hot, not too many people around, and only a few brave souls on the beach. We cycled along the jagged cliffs, up and down, in and out, with the deep blue sea accompanying us the whole way. Making our way along some of the wooden pathways which helped the path negotiate precarious stretches of the cliffs, I decided I might not mind too much if the wind accidentally blew me over the edge. The deep blue sea looked so inviting. Just past a square lighthouse fixed solidly to a rocky headland, we took a breather on some wooden benches specially positioned to admire the view. A father and his 9-year old son were resting there, with their backpacks and sleeping bags sharing the seat with them. They had been walking for several days, and had come from Port Bou, near the French border. When we met up with them again, the father was shouldering both packs. 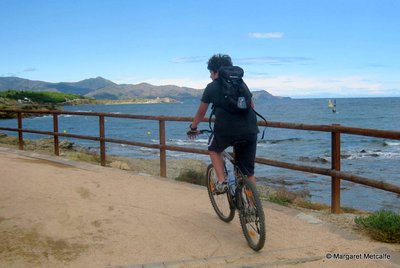 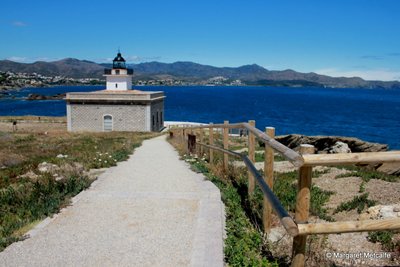 Lighthouse along the way 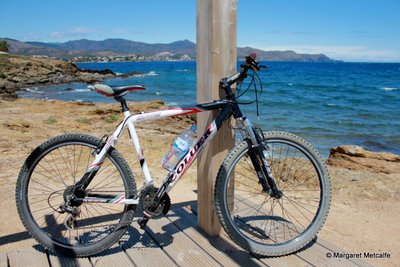 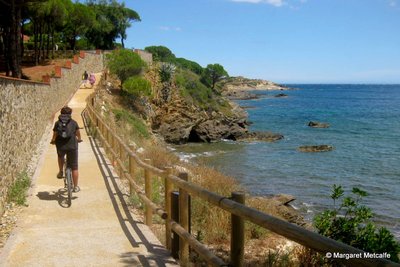 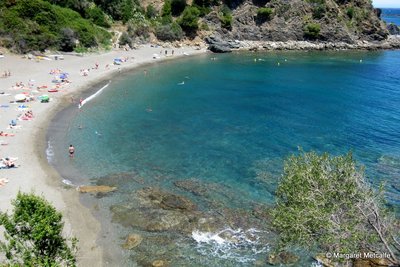 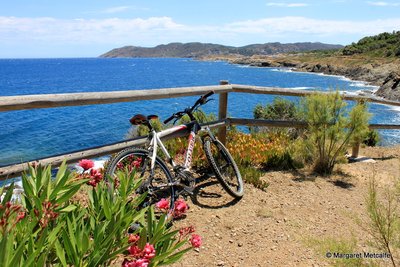 We didn't see the walking family when we arrived back in Port de la Selva. Finding a table in a sheltered café on the beach, we quenched our thirst and ate a bocata de pernil salat, a Catalan cured ham baguette sandwich. Dozens of small boats were marooned on the beach near us, while the rest were bobbing up and down in the port, their flags waving excitedly at us in the wind. Behind us the whitened houses congregated around the port, along the sea front and up the hillside, nudging each other in a bid to get the best views. The large white church looked down over them, like a benevolent grandfather surrounded by all his grandchildren. It was a fitting place to end our cycle ride. Blue sky, blue sea, blue boats... Blue is definitely a magnificent colour when combined with two wheels. 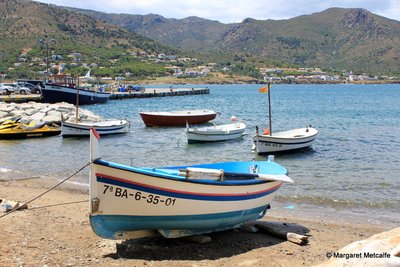 Fishing boats on the beach 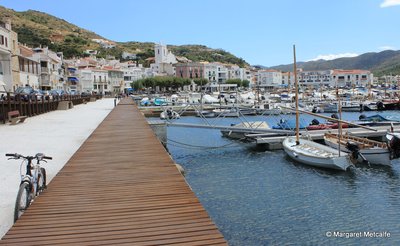 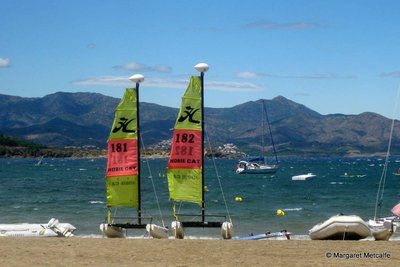 Posted by margaretm 10:24 Archived in Spain