Pedalling through a volcanic-inspired landscape

A few days ago, my taxi-driver duties were miraculously confined to a 9 o'clock drop-off in the morning and an 8 o'clock pick-up in the evening. That meant I had virtually a whole day to myself so I packed my bicycle into the back of the car and set off to Catalonia's ancient volcanic region, La Garrotxa (pronounced "Garrotcha"), to do a spot of cicloturisme.

A long time ago, going backwards 700,000 years, a series of volcanoes popped up in this region one after the other, erupting once and spewing out incandescent molten rock from their glowing insides. The last active one died fairly recently. Recent in volcanic terms. I would hardly describe more than 11,000 years ago as recent. There are more than 40 volcanoes here but don't expect to see a string of Popocatéptels. The gentle rolling hills of La Garrotxa are former cones which have gradually been camouflaged under a thick mantle of oak and beech woods, and the fertile soils have given rise to the distinctive landscape of the region, along with sparkling streams, scatterings of volcanic rocks, lava flows (more than 20 of them) and picturesque villages. Ideal for a day or two of cycling. And nothing too strenuous as I wasn't sure my knees would take anything more agressive at the moment.

The sky was a deep blue as we (my bike, my car and myself) set off and drove past Castellfollit de la Roca, a small rocky cluster of houses perched on top of a spectacular basalt cliff. The buildings sprout from the top of the sheer cliff as if they were an extension of the sculpted volcanic rock columns, and peer defiantly down to the River Fluvià 40 metres below. On a windy day, any precariously fixed piece of washing or accidentally-dropped item may end up far from home. It's a long vertical drop. Despite many visits, I am still mesmerised by this place. 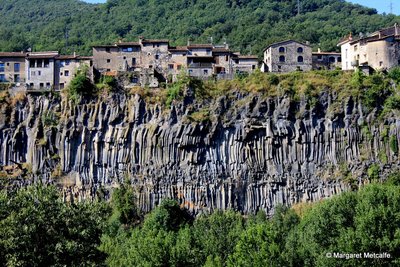 Houses atop the basalt cliff

We continued on to Olot, the capital of La Garrotxa, which fittingly has a couple of volcanoes sitting inside the town's limits and is intensely proud of its Museu del Volcà. As I was driving out of the town, some stocky horses were nosing around among the wildflowers so I pulled the car off the road to take a closer look. I was in La Moixina, a shady woodland area, crisscrossed by crystal-clear bubbling streams, and home to a collection of picturesque country houses with thick walls of volcanic rock, wooden balconies and neat vegetable gardens. As I walked along the small lane, I noticed that the warm sun had coaxed an elderly man outdoors. He was propped up by the front door, watching a dog playing near the barn. Behind his house was a small church decorated with a bunch of colourful flowers in each window as if to remind people it wasn't extinct, it was still in active service. It nestled unobtrusively in a field at the end of a small path which crouched between waist-high stone walls, volcanic rock walls. 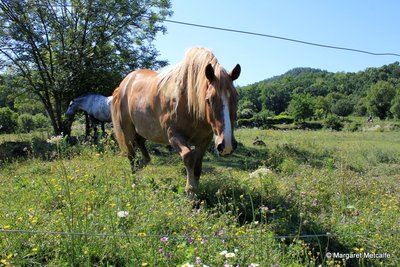 Horses in a field near Olot 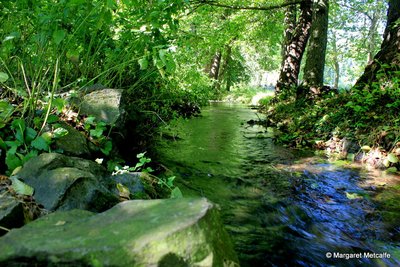 Stream and woods at La Moixina

I was finding it difficult to reach the place where I would park my car and start cycling. There were so many interesting places along the route to waylay me and divert me from my intention to cycle there and back along the Amer-Olot section of the Ruta del Carrilet, an unused railway where the train used to chug between Olot and Girona, now converted into a scenic, traffic-free bikeway.

At Les Preses, I spied a gathering of cute-looking Catalan donkeys (the inspirers of the car bumper stickers featuring the ruc català), and once again I couldn't resist a slight detour. A middle-aged couple invited me into the field where they were grooming the patient creatures with their distinctive white muzzles and bellies, and combing out vast clumps of dark-coloured fur, transforming their rather shaggy matts into sleek well-brushed coats. With a bareback saddle pad and stirrups on their backs, they were ready to take people for walks through the Parc de Pedra Tosca to learn about the volcanic landscape and features. "How many donkeys have you got?" I asked, mentally counting about 10 of them tied up to the fence. I was surprised at their answer. "All together, about 70 or so. We also have some burritos, baby donkeys. You can go and see them on the other side of the road if you want." I could see that these cheerful couple were devoted donkey fans and doing their bit to help save these creatues from near extinction. I moved on, leaving them to prepare for their walks. 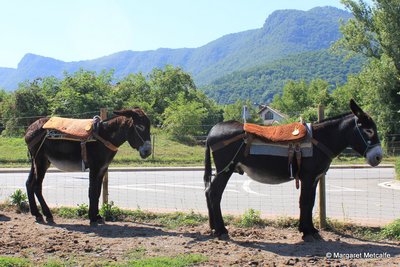 The car coasted effortlessly down the Vall d'en Bas, its engine humming happily as it re-discovered the route it had covered regularly some years ago when I had worked here for a while. The names of the villages were familiar, the tunnel, the bends, the church belltowers, even the rocks and mountain shapes. I was amazed at how luxuriant the paisatge looked. In summer La Garrotxa is infused with a thousand different shades of green.

We finally arrived at Amer. I unloaded my bike and started pedalling along the Ruta del Carrilet. The route climbs up slowly yet tirelessly until it reaches Olot, making its way through cuttings in the rock, across wooden bridges and viaducts, and passing through poetic villages. My heart, my lungs, my leg muscles, my red blood cells.. were all raring to go. Unfortunately, due to my rather delayed start, the sun was already high above me beating down mercilessly and reducing my shadow to a mere invisible ghost. What I didn't know then was that it was going to be one of the hottest days of the summer so far. I was glad there were oak and beech woods to keep me company. Pedalling joyously along, I felt elated. A snake, caught napping in the warmth of the open path, slithered from under my wheels, deciding it wanted to live another day. Butterflies flitted in and out of my spokes and escorted me along my way. After a dozen kilometres of steady uphill pedalling, it seemed the sun was sucking the energy and life-fluids from my body. I could feel the drops of sweat leaking out of my skin, racing downwards to see which one would reach my toes first. And just when I thought I was about to overheat, the tree branches would reach out and plunge me into a refrigerated leafy tunnel, sending my thermometer plummeting down again. 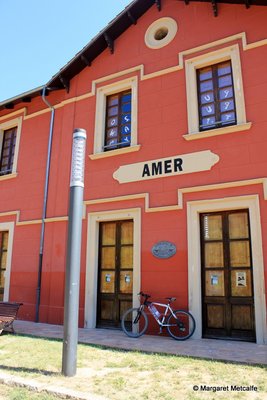 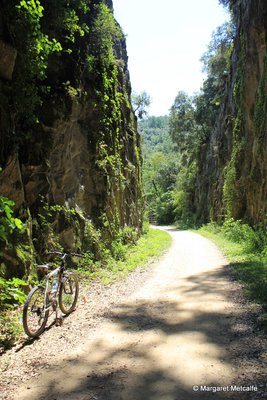 Cutting through the rocks along the Ruta del Carrilet 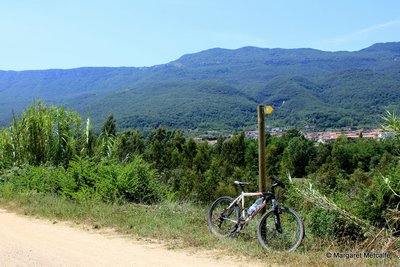 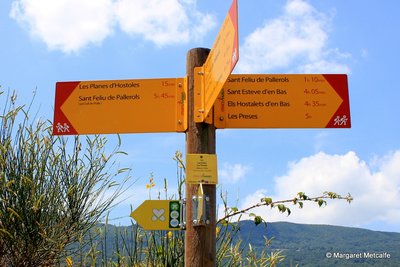 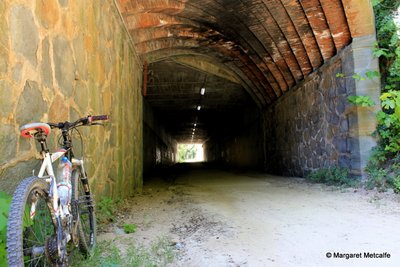 At Sant Feliu de Pallerols, I stopped for a throat-chilling Coke, with chinking ice cubes and lemon, and stuck my entire head under a tap. The resulting image was not particularly flattering but it did wonders for my brain. I felt as if I'd been transported to the Arctic Circle. A couple of cyclists at the next table kindly offered to take a photo of me and my bike. ¡Tienes que tener por lo menos una foto! "You have to have at least one photo of yourself", they said. I couldn't refuse but I have to admit I wasn't looking my best.

Sant Feliu turned out to be a great place to do a bit of cicloturisme. Perhaps its major feature is the river which glides, gurgles, splashes, gushes or pours depending on which part of the small town it is flowing through. Stone-walled houses, some of them with their toes in the water, had geraniums in the windows, and huddled together around a number of squares and solemn churches. In the company of other cyclists, I propped my bike against a bench in the welcoming plaça major or main square with its monumental moss-covered fountain and sat down at one of the tables under the huge shady trees. Some of the eaters were obviously Tour de France fans dressed in their lycra suits. The next table was occupied by a mother and father and their two small boys noisily licking their ice-creams. I had seen the parents pedalling slowly uphill with the boys sitting behind. Their young heads flopped drowsily from side to side with the undulating movement of the bicycles. They had clearly woken up feeling hungry and were now re-energised after their meal. 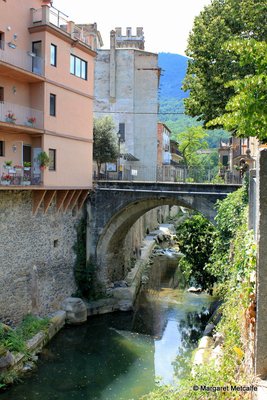 Bridge over the river at Sant Feliu de Pallerols 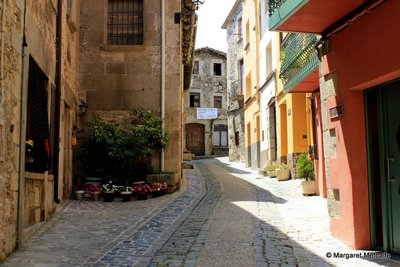 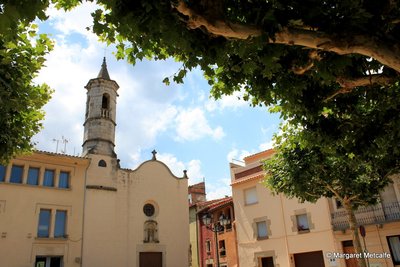 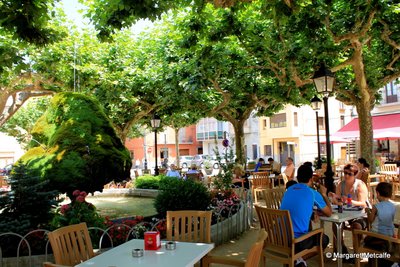 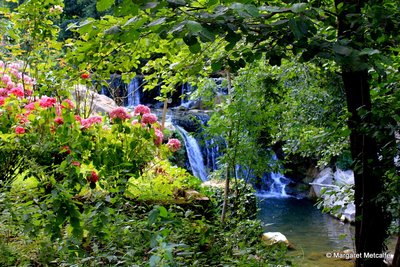 As I wandered around Sant Feliu, pedalling over the cobbles at times or pushing my bike up the stone steps, I came across a street with an aptly descriptive name: Carrer dels Cantons Estrets or "Narrow Corner Street". The width decreased rapidly until around the corner, the space narrowed to exactly the width of my handlebars. Any smaller and I wouldn't have been able to squeeze through. I contorted my body through the gap and breathed out. 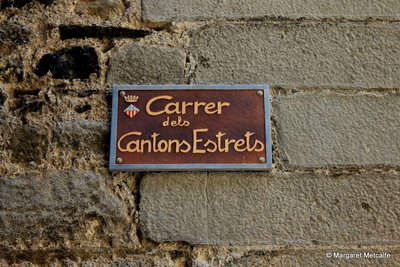 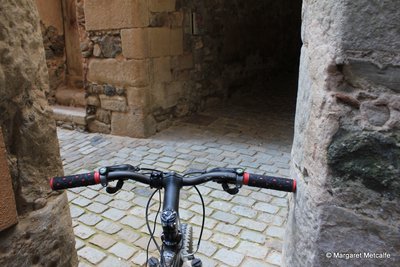 Just about squeezing through 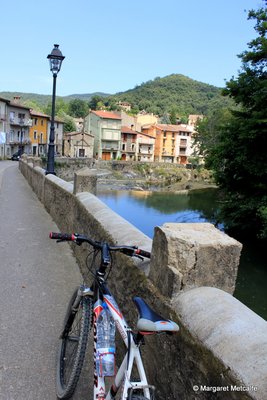 Later on, I decided to explore around the small village of Els Hostalets d'en Bas, with its pleasantly perfect Romanesque church and rows of houses with wooden balconies sagging with eye-catching geraniums. The evening sun lit up the nearby mountains and I rode between fields where the maize stood to attention like tall green soldiers. Horses were cropping the grass with their teeth, a couple of tractors were pacing back and forth in the fields and a cool breeze ruffled my already windswept hair. It was just me and the road. "This is the life!", I murmured to myself. "I don't know how I'll ever return to the big city!" 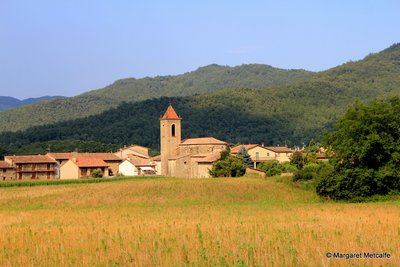 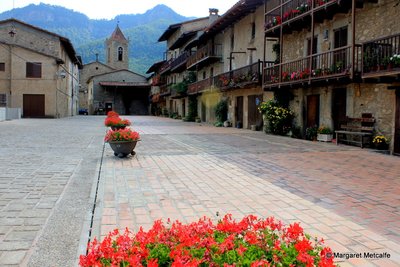 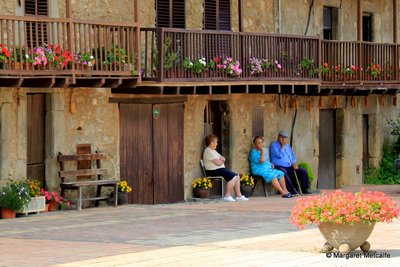 Enjoying the cool of the evening 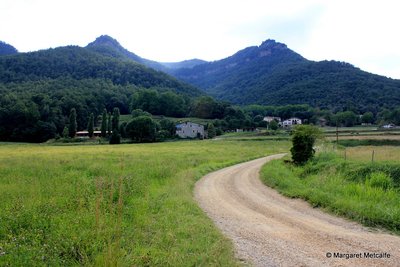 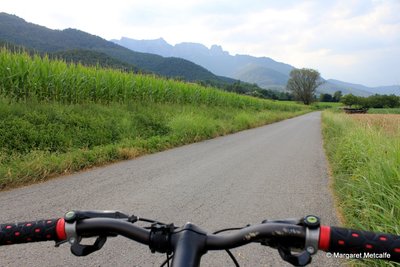 Cycling along an open road

Posted by margaretm 22:59 Archived in Spain