A day out at Colliure in France 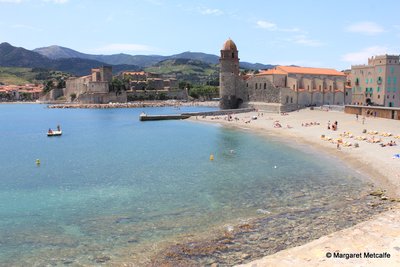 The wind was blowing more enthusiastically than we had anticipated as we drove to our neighbouring country and the road along the coast twisted and turned dizzily, hugging the cliffs and refusing to let go. This is where the Pyrenees mountain range, crinkling up between Spain and France, dips its toes in the Mediterranean Sea which, true to its name, was a deep Mediterranean blue colour today. The wind was whipping up frothy white horses over the sea and trees were bending over like old men playing boules. The French border was no more than a windswept sign at the side of the road and an unmanned, almost derelict police hut. A little further on, there was a warning sign saying VENT VIOLENT and a windsock having convulsions in the strong Tramontana wind. We drove through Cerbère, Banyuls-sûr-Mer and Port-Vendres along France's Côte Vermeille. Towns whose names were becoming increasingly French sounding, where instead of the typical persianas (Spanish blinds), wooden shutters barred the intense sunlight and heat from entering the colourful houses with their distinctive red tiled roofs. Charcuteries and boulangeries began to appear, pavement cafés huddled in the shade of enormous platan trees and vineyards carpeted the mountainsides in orderly rows. Yes, we were definitely in France. 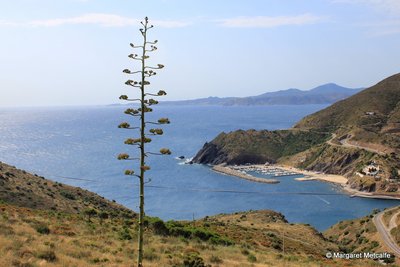 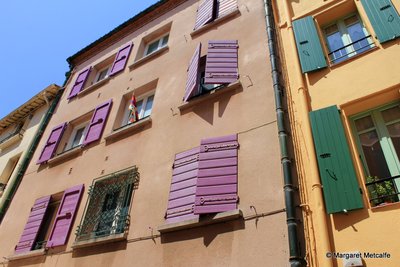 At last, our destination appeared. Collioure, a picturesque coastal ville, gives you the impression that it was created expressly for Impressionist or Fauve painters, like Henri Matisse and André Derain who arrived here in 1905, captivated by the light and colours. With wild brushstrokes of marine blue for the sea, orangey-red roof tiles, green pine- and vine-clad hillsides and painted houses with weather-beaten shutters, it has been attracting artists and holidaymakers ever since. Yet it's not only the colours but the perfect composition of a small historic enclave sheltering in a beautiful bay backed by rugged mountains. The enormous stone walls of its imposing, fortified Château Royale were never destroyed despite numerous attacks and seiges and continue to jealously safeguard its rich heritage, left behind by the Romans, the Knights Templar, the Kings of Mallorca, the Spanish and the famous French military architect, Vauban. Throughout centuries, the castle has been pounded by waves and bombarded by gales but remains intact. Higher up stands the historic Fort Miradou on the windswept promontory, austere custodian of the small town and the adjacent coastline. And right down in the harbour is Collioure's well-loved church, Eglise Notre Dame des Anges, this small town's defining image which has circled the globe. With its very foundations set in the sea, the distinctive belltower with a pinkish dome began life as a lighthouse, warning sailors of the treacherous rocks. A couple of crescent-shaped pebbly beaches, once occupied by colourful fishing boats and nets, today in summer are invaded by a kaleidoscope of beach towels and sunshades, discreetly eavesdropping on snippets of conversations in a dozen languages. 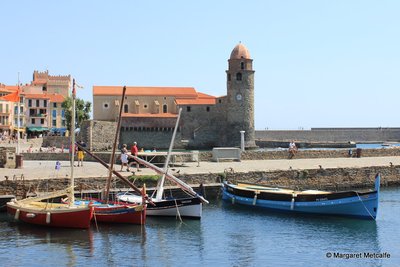 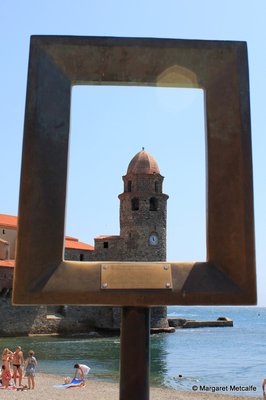 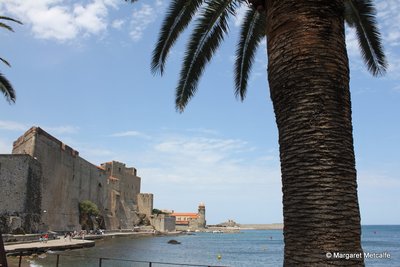 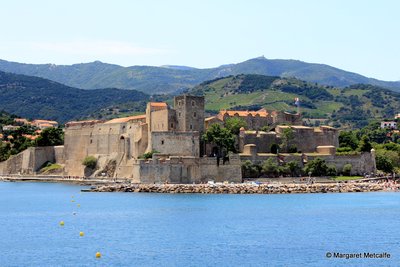 The castle seen from the lighthouse 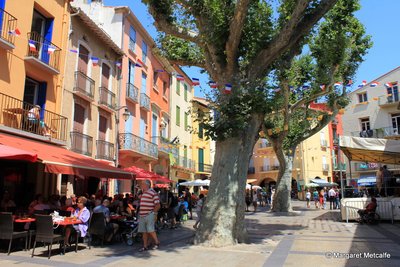 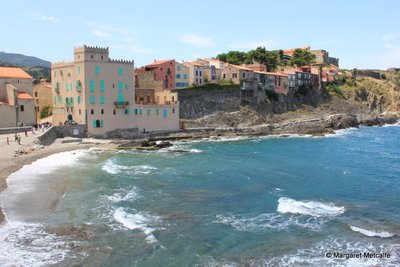 Houses on the cliffs 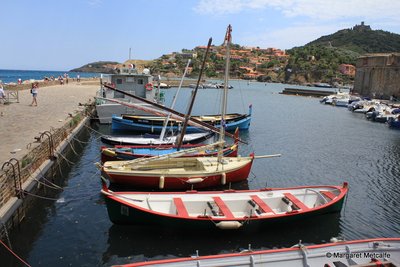 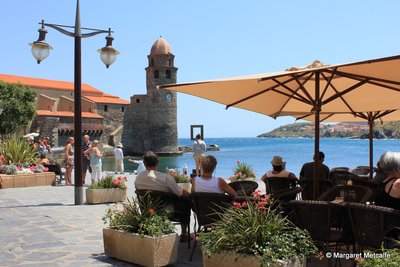 We set off to explore. Wandering around the town's narrow streets was like getting lost in a Matisse painting with bright flecks of colour everywhere. Houses and shutters were daubed in a rainbow of colours. Apparently the fishermen, after painting their boats, would use the left-over paint on their homes, creating a multi-hued village. Artists' ateliers, studios and galleries were scattered around as liberally as shops selling the local wines. Small shops and boutiques overflowed with lavender, pottery, crafts, hand-made scarves, vivid oil paintings and produits de Catalogne. Here in French Roussillon, they also speak Catalan and were selling Catalan fuets, botifarras and anxoves. The symbol of the burro català, a rather cute-looking donkey, turned up in the most unlikely places, on everything from stickers, to beach towels and mugs. 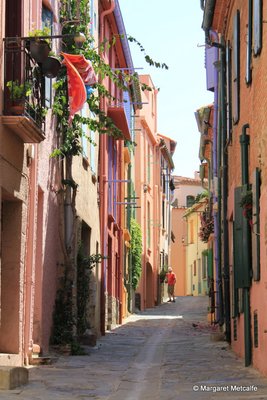 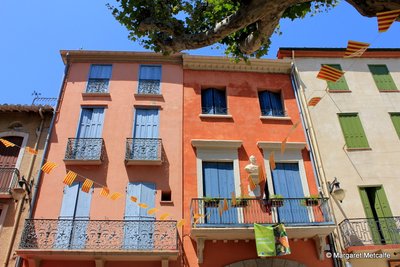 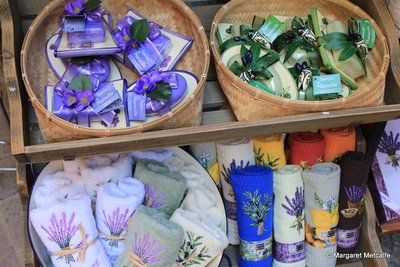 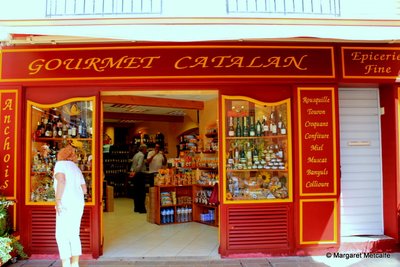 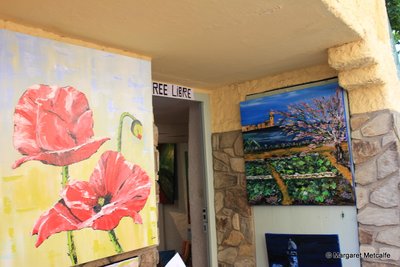 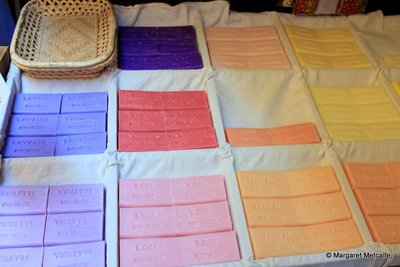 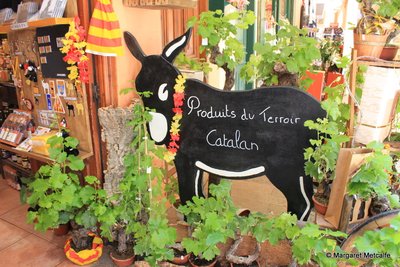 Outside the protection of the walls, the wind was playing havoc with the outdoor market in the square, trying to turn the sunshades and awnings inside out, chasing off with anything that wasn't anchored down. When that didn't work, it whipped up the dusty ground and dumped it in our eyes and hair, hoping we'd leave the market. Instead, we sauntered around the stalls, taking in eyefulls of saucissons (cured sausages), yellow wedges or white cylinders of French fromage or cheese, including tommes de chèvre au fenugrec, pots of plump olives and jars of anchois (anchovies) and miel (honey). Other stalls were bursting with floral-smelling bars of soap and essences, purple, pink and ivory coloured. Shiny hand-grown vegetables, laden with organic vitamins, jostled in their wooden crates and fresh loaves of country bread or pain sprinkled with sesame seeds were being dispatched urgently to a queue of would-be buyers, attracted by the smell of fresh baking. A middle-aged lady with a toothy grin started up a catchy French song which was taken up by the other vendors nearby. Maybe it was a song to frighten away the vent violent, known as the Tramontane wind. 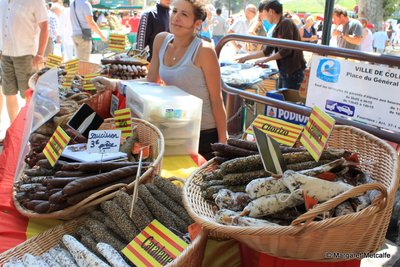 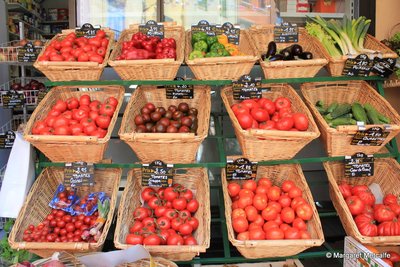 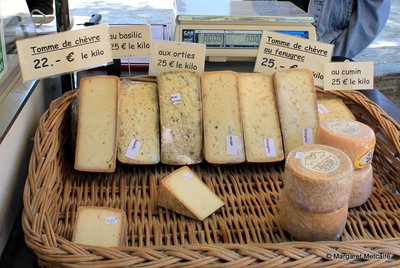 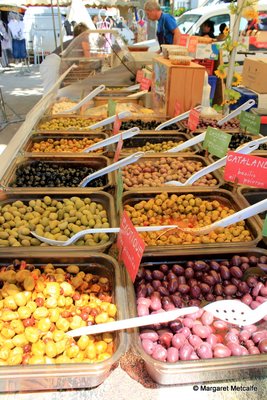 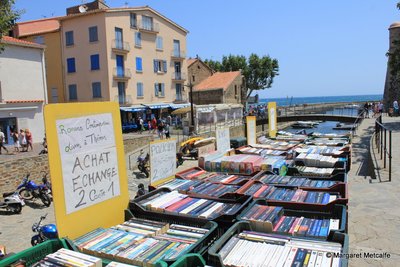 For lunch, we had poulet and saucisson sandwiches in fat baguette flutes, and chorizo et olives and thon et crudités squashed between slices of pain intégral. Crudités sound horribly crude and the word always brings a smile to my lips but these were nothing more than crunchy lettuce and tomato accompanying the tuna. Sitting at the end of a pier, with the clear water magnifying the pebbles below, and looking out over the imposing walls of the château, the church and lighthouse, we almost lost our food in the water. A strong gust of wind carried one of our plastic bags off to sea and left us literally sitting on our lunch so it wouldn't blow away.

A bit later, as we clambered around the small headland to explore the chapel and life-size cross afixed to the rocks, Marc and I were almost airlifted to North Africa by the wind and we had to shuffle our feet along the ground to prevent our flip flops from being snatched away by the gusts. It was wonderfully cool and airy despite the intense sunshine. So much so that it wasn't until we were leaving later that afternoon, that we realised we had been sunburnt. Brûlés. Red as a lobster. Oh là là, c'est très fort, ce vent, n'est-ce pas?! 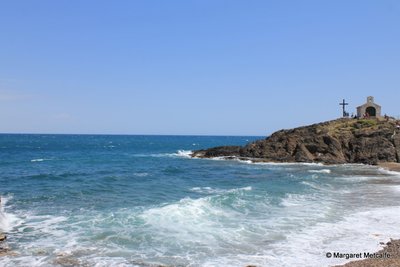 Posted by margaretm 06:51 Archived in France