Girona, the capital of our province, lies a tantalising 35 kms away. Yesterday, I accompanied my niece, Seza, there and while she gave her English class, my intention was to do some food shopping to stock up the house. In fact, I ended up doing nothing of the sort.

Having left Seza to her subjunctives and phrasal verbs, I sauntered down to the river in search of the new Nespresso shop for some coffee capsules. I cannot function properly until I've had my shot of caffeine in the morning. As I stood on the Pont de Pedra, the bridge crossing the River Onyar, the beautiful white cathedral standing head and shoulders above the old town on the other side of the river beckoned me to come over. No, not today. I have to do some shopping, I murmured to myself. The houses overhanging the river below had been renovated and painted since last summer. They looked more cheerful. I continued down the pedestrianised street on the other side, my nose trying to detect the coffee shop. Slightly waylaid, I diverted my steps past the Museu del Cinema and gazed up at the tall palms in front of the nearby church, their crowns shaking in the breeze. Returning to shop-lined Carrer Santa Clara, my attention was drawn to the red Eiffel Bridge spanning the river a little further down. I climbed up the steps. There was the cathedral, peeking through the red structure, begging me to come over. I haven't got time. Another day, I said. The river looked so clean today and white and grey gulls flapped their wings and glided under the bridge. 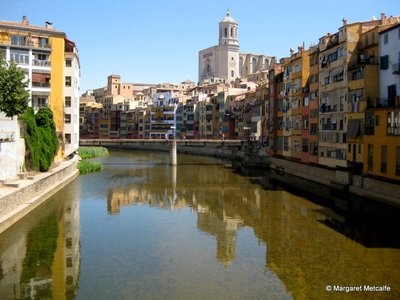 Looking towards the Old Town across the River Onyar 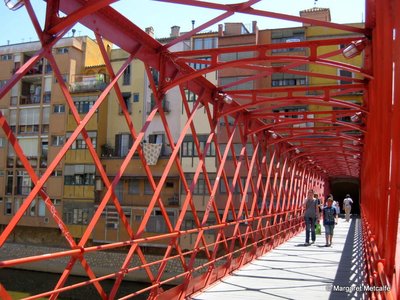 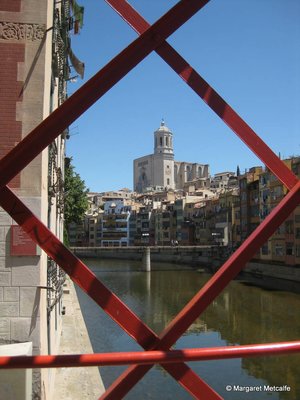 Girona Cathedral from the Eiffel Bridge 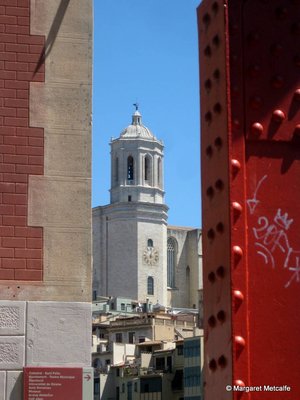 The Cathedral peeking through

My nose led me to the shop, I purchased my coffee capsules and de-scaler for the coffee machine and decided to take a quick look at the Plaça de la Independencia now that I was down here. The renovation work had been completed and I was frankly pleased with the result. The arcades were filled with chairs and tables and the clinking of glasses and cutlery bounced off the walls. The boldly black and white tiled flooring absorbed the intense sunlight slicing through the arches, dissipating it. It was lovely and cool. I strolled down to the riverside again and now I was right opposite the Cathedral, which looked down from its vantage point on the other river bank. It was very insistent. OK, I'll just nip across to the other side but I must hurry up and do my shopping. I'll come back and see you properly soon. 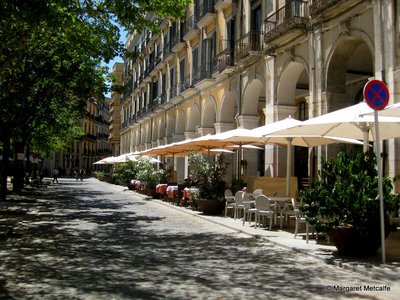 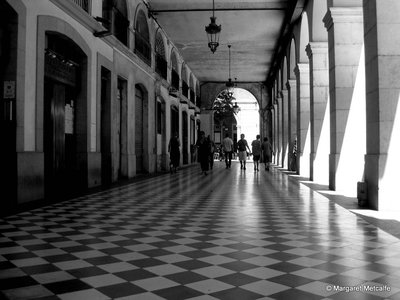 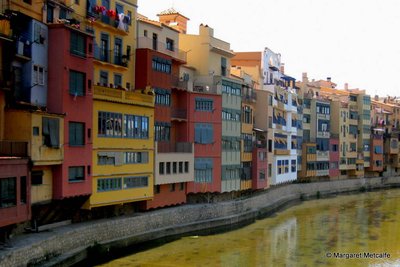 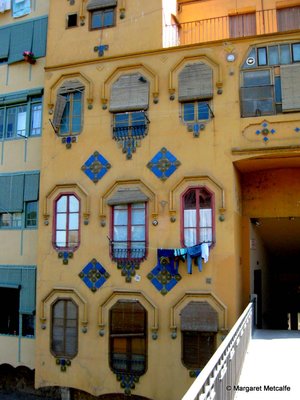 Façade of house along the River Onyar

I crossed over, ducked under the archway and followed the cobbles down the narrow street into the Old Quarter. It was all delightfully familiar coming back here. Cool and dark, out of the harsh one o'clock sun. As I passed the flight of stone steps leading to El Call, one of the best-preserved Jewish Quarters in Europe, I decided to make a slight detour. Just a few steps along Carrer de la Força to see that very narrow rabbit-warren like alleyway, almost totally hidden from sight, I said to myself. A small group of tourists from a Central European country were being fed the fascinating history of this place. I squeezed past them and went up. But the Cathedral had a magnetic pull and I actually took a few steps more than I had anticipated until there I was, standing at the bottom of the flight of 90 stone steps, gazing up at its incredible façade far above me. At that point, I reasoned that it would be silly to come all this way and just look up at it. I really should just spend a few more minutes and make my way to the top. How could I miss taking in the view from up there? So that's what I did. The Cathedral seemed so pleased to see me again. As if it had been waiting a year for me to come back again. I took photos of the statues all up its façade and looked out over Sant Feliu, one of the few churches in Spain with a spire, albeit a broken one. The upper part collapsed in the 17th Century and was never replaced. Some say it was a lightning bolt. 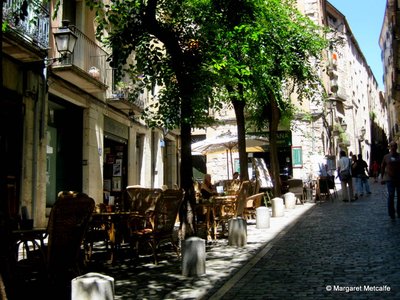 Looking up a street in the Old Town 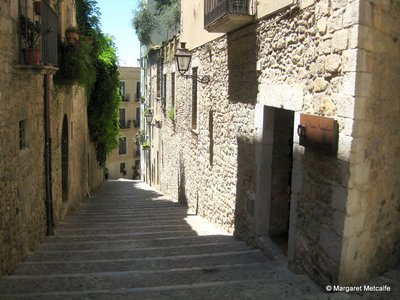 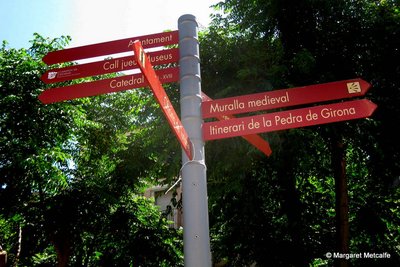 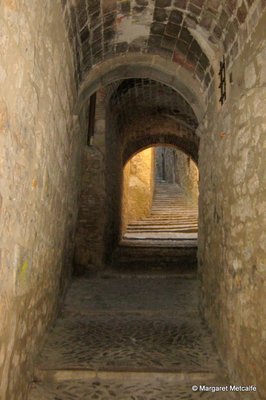 Narrow alleyway in the Jewish Quarter 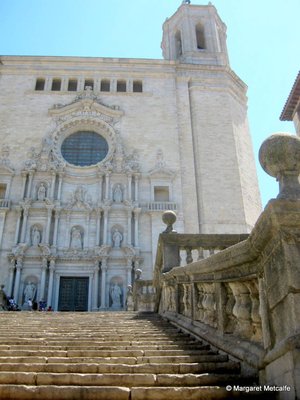 Steps leading up to the Cathedral 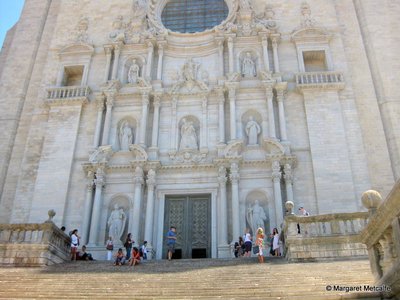 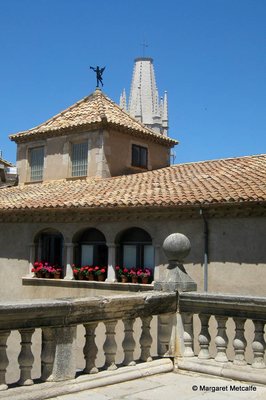 Sant Feliu Church in the background

I thought back to the first time I came to Girona, 21 years ago. A few days after landing in this beautiful corner of the world, someone told me I really had to visit the city of Girona. It was a cold February morning when I summoned up all the Spanish I knew and took a train in the right direction. As we approached the city, there was a smell of rotten eggs as we passed Sarrià de Ter and I saw a paper factory belching out fumes which hung over Girona, impregnating the city with a distinctive odour. Getting off the train, I made my way down to the Old Town, trying to warm up in the anaemic wintry sunlight. Crossing the river, I found myself in a city with history deeply embedded in its stones... its cobblestones, stone steps, narrow streets lined by stone buildings with balconies which blocked out the sunlight, and capping it all was the Cathedral. I was awe-struck, dwarfed by Girona's history and by its architecture. But there was one thing that puzzled me. Where was everyone? I seemed to be the only person here. Just me wandering around shivering in the cold, dark streets where the sunlight hardly penetrated except up at the top, on the esplanade near the Cathedral. Gothic churches, arches, ancient Medieval walls, Arab baths, the tangle of the hidden Jewish Quarter... no-one else was enjoying this unique place. Looking for somewhere to eat or at least to have a warming cup of coffee, I noticed another thing. Everything was closed. In the end, I bought a sandwich in the new part of town and headed back home. My friends explained the mystery. "Todo está cerrado los lunes por la mañana". That's when I discovered that shops and restaurants are closed on Monday mornings in this part of the world.

Now here I was, 21 years later, and thinking how much Girona had changed during that time. The paper factory no longer belched out fumes, there was no hint of rotten eggs, the Old Town had seen many of its buildings renovated and was now a lively place, full of restaurants and shops. And tourists who once bypassed this exceptional city, making a bee-line for the Costa Brava beaches to roast themselves for 2 weeks, are now stopping off to take in a bit of culture. And are pleasantly surprised.

I suddenly realised it was almost 1.30pm. There was no more time to walk along the walls and enjoy the panoramic views over the city or explore its Arab baths or museums. I had to hurry back to meet up again with my niece. The food shopping would have to wait till later on this afternoon. I quickened my steps and after crossing over to the other side, I looked back at the Cathedral. I'll be back, I promised. And a promise is a promise. 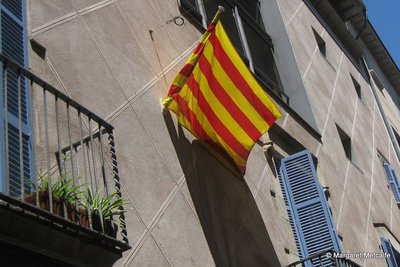 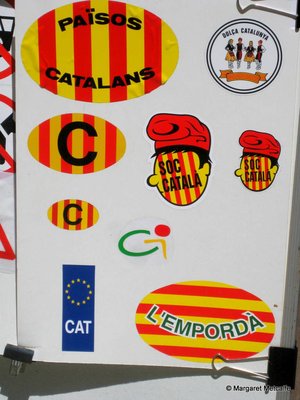