Not the best way to start a holiday

Headed back to Spain

Some days are best forgotten, relegated to the deepest recess of your memory or eliminated from your brain's hard disk. Yet, more likely than not, these are the memories which will continue to re-surface for years to come. Luckily for most of us, these horror stories undergo a kind of transformation with time. Somewhere along the way, they are whisked around, stirred, shaken and mellowed, emerging in the end as humorous anecdotes to fondly recall.

Our journey from Mexico to Spain last Friday was one of these days. It began with a re-scheduling of our flight from Mexico City to Paris, from 8.30 pm to 10.10 pm. Early in the afternoon, as we started to seriously pack our cases, the black storm clouds rolled over the city and started pelting rain down. It was good for the garden, disastrous for the traffic and menacing for a flight leaving the Valle de México. We set off for the airport early, despite the delay in the flight, hoping to get a head-start. Just down the road, we joined another three million cars with the same idea and began our crawl along what must have been the world's largest long-term airport car park, the Circuito Interior, also known as the Periférico. I can't ever remember seeing such a solid lump of cars moving nowhere and it had to be just the afternoon we had a flight to catch. The 20-odd kilometres to the airport took an eternal two hours as we inched forward, squeezed tightly between Tsurus, Chevrolets and VW Beetles, unable to breathe. As Josep so aptly expressed it, at least we had two hours of quality family time before being separated for a month, reading every piece of graffiti on the murky walls, commenting on the billboards, imitating the politicians on the radio commercials, and inventing possible stories for the neighbouring drivers we were sharing extended time and limited space with. The signs on the overhead bridges proclaiming "Ciudad de México, Capital en Movimiento" couldn't have been further from the truth and sounded as hollow as the politicians' unrealistic promises. Mere wishes. 80 km/h maximum said the green signs. We weren't even going 80 metres. We could have gorged ourselves on the tons of papas and cacahuetes (crisps and peanuts) being sold by enterprising boys as they sauntered between the immobile cars, sheltering under the bridges out of the rain. We finally made it to the airport with our sense of humour intact, but relishing the idea of escaping from the traffic jams for a few weeks. 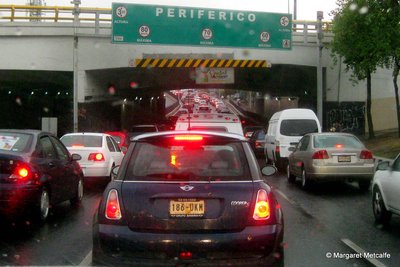 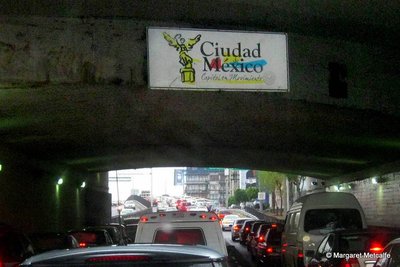 As you can see, Mexico City is a Capital in Movement! 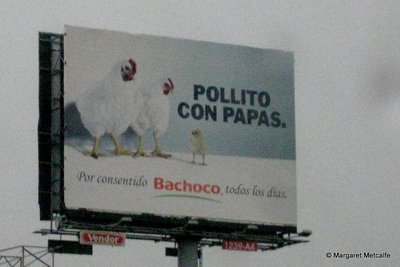 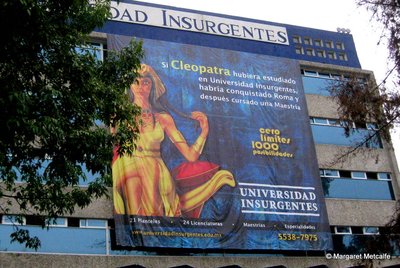 Another advert for a University

At last, the massive Air France jumbo jet heaved into the air like a heavily pregnant pelican, unruffled by the weather, and off we set on our 10 and a half hour flight. Frankly, I was having problems imagining 10 minutes in this seat. Maybe it was the economic crisis, but I could have sworn they'd added another 20 rows in this plane since the last time we had flown with this airline. My nose was inches from the seat in front and I could not seem to get my legs into the teeny space without bending them the wrong way and I'm small. Marc fell asleep almost immediately as only he can. Suddenly, just 15 minutes into the flight, we hit a solid wall of turbulence. It felt as if the Aztec god Tlaloc was shaking his toy plane. Then came a sickening and terrifying free fall as the plane plummeted hundreds of metres downwards in seconds. My thought in that split-second was of the Air France plane which sank to the bottom of the Atlantic Ocean two years ago. Everyone on the flight screamed, heads soared over the headrests as we were thrown out of our seats and given the Giant Drop Tower treatment. Marc woke up with a start. "Qué pasó?", he said sleepily. "What happened?" The turbulence continued on and off the whole way across the Atlantic and every time we were tossed around, you could hear 526 hearts beating wildly, expecting another ride on the Scream Machine or Roller Coaster. It was hard to sleep. To cap it all, on a flight where the teenagers could be counted on the fingers of two hands, Air France's selection of in-flight entertainment was thoughtless to say the least. "Justin Bieber" was the main film, followed by French rugby and a cooking programme. I untwisted my legs and neck for the two hundred and twenty-third time and tried a different position. Sleep didn't come. I should have followed Cristina's example and taken an air-sickness tablet. She promptly fell asleep in a strangely upright position, looking as if her newly-acquired blue neck pillow had its fingers prised around her neck and was throttling her.

The landing at Paris could only have been carried out by a novice or a young boy on a flight simulator. There is no way an experienced pilot would have submitted us to that rolling and lurching movement. Whatever hope I'd secretly nurtured about not feeling sick on this trip was shattered by a thousand waves of nausea. The little boy in the seat behind me was filling up a sick bag. As soon as we were back on land, despite the fact that it now seemed to be the sea for me, I swallowed one of the magic pills. We had been catapulted in 10 hours from one hemisphere to another one, from Spanish to French, from pesos to euros, from quesadillas to croissants, from life-size mariachi hats to Tour Eiffel key rings, from bottles of Tequila to Pernod. And here I was, dozing off in a groggy slumber, hardly able to hold my head up straight, the announcements over the loudspeakers echoing numbly in my head. I slept on the seat by the porte d'embarquement, hoping my kids would hear the call. 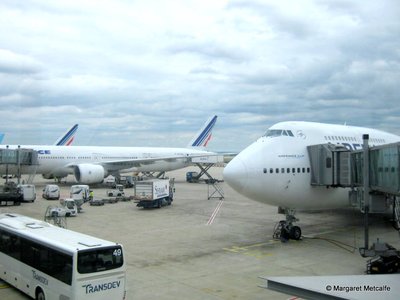 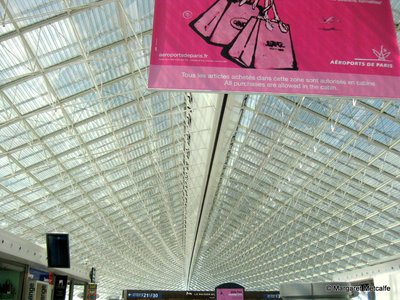 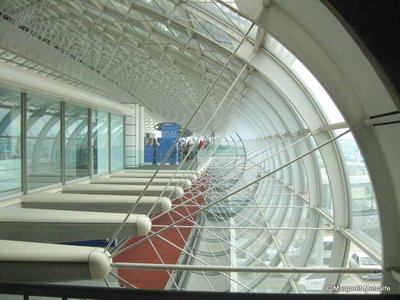 The flight to Barcelona was delayed a further hour which I spent in a state of semi-consciousness. Cristina and Marc were hooked up to high technology gadgets so I don't suppose they missed me. When we finally boarded, the plane was half empty and I remember little of the flight. Although I should have been in a state of euphoria at arriving back on Catalan soil, my brain was too fuzzy to register any real joy. 'These pills están funcionando muy bien, I must remember to take them on the long trip next time', were my only thoughts. At the baggage claim, I slumped down on an empty seat as we waited a long time for the machine to spit out the first cases. Unfortunately, this is becoming a set pattern for us. We wait and wait and get dizzy watching all the cases go round and round on the conveyor belt but ours don't appear. 'Maybe I'm having a nightmare, that's all', I thought. 'It can't happen three times in a row!' It wasn't a somniferous nightmare, it was a real one. Our cases didn't appear. Somewhere along the line, they had been swallowed up by some monstrous machine, or by some baggage handler who had a weird penchant for silvery-grey and fuscia pink suitcases. 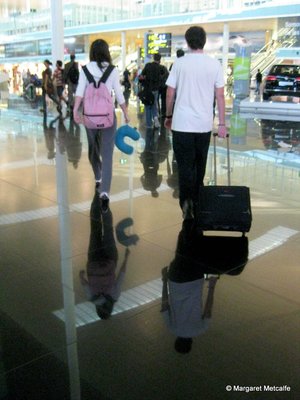 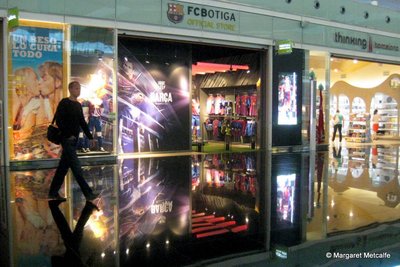 Back on Catalan soil - Barça shop at Barcelona Airport

There was nothing else to be done. Even the little luggage icons had stopped moving across the sign above the belt. Our cases had disappeared again. Ten months ago, flying from Barcelona to Mexico City, they had got stuck in Paris. We waited there for a further three hours for the next flight to arrive. Only three of the cases appeared that time. We had to return the following day for the fourth one. Now it had happened again. We made our way to the Complaints Desk. After a brief search, the lady said they were in Paris, they would arrive the following day. We trudged out into the Arrivals Hall expecting to find that my brother-in-law had got fed up waiting two hours for us but there he was, smiling, clutching a yellow duty-free bag. At least he'd made good use of the time.

Talking nineteen to the dozen, we went off in search of the car. It took far longer than we expected. He'd forgotten where he'd parked. For almost 20 minutes we paced back and forth through the vast carpark, hoping to recognise the car. When we'd almost given up hope we tried the -1 floor and to our relief, there it was. I think it was just as well we didn't have our suitcases with us. I don't think they'd have fitted in. The next hour and a half's drive back home to the Alt Empordà seemed to last an eternity. Longer than the two hours going to Mexico City Airport. Almost 24 hours to the minute, we arrived home. Travelling very light. It was high time we started our summer holidays.

Posted by margaretm 21:46 Archived in Mexico