The day my car vanished

Driving in Mexico City is, more often than not, a harrowing experience. When you're not being chopped up like minced meat by aggressive drivers, you find yourself glued to the neighbouring cars as the thick traffic solidifies around you like cooling lava. And if you do manage to get to your destination in one piece and you're still sane, there's still one more hurdle to get over. You have to find somewhere to park. 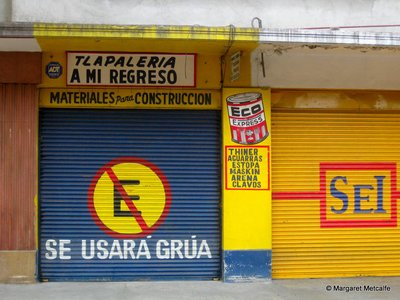 No parking. Your car will be towed away. 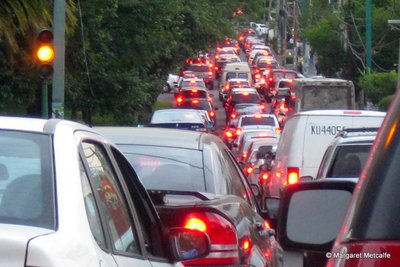 There are millions of vehicles in DF and sometimes it seems as if they all got the parking spaces before you. Parking in this city is a matter of timing more than anything else. Depending on the time of day and, of course, the area you happen to be in, your chances of finding somewhere to estacionar your vehicle can vary from easy to downright impossible. More than once, I've made my way to the supermarket, sat in the queue waiting to get into the supermarket car park (which is synonymous for blocking the road) for 15 minutes and then decided to go home empty-handed or try somewhere else.

However, there are a number of parking options available to you, some of them a bit unusual:

1. If you go to a modern shopping centre, there is usually a modern car park alongside, as in Europe, often with European prices. The only difference is that you can get your car washed by the boys there while you're away. It will cost about 40 pesos. A case of killing two birds with one stone.

2. Small parking lots abound in many places on empty building sites, some of them terribly scruffy looking, with a small hut at the entrance next to a gate and usually a hand-painted notice proclaiming Pension 24-horas or 22 pesos 1 hora. Some of them look like the last sort of place you'd ever want to leave your car but they are usually OK. You can park there for a fee and have your car taken care of, washed, cleaned inside etc. 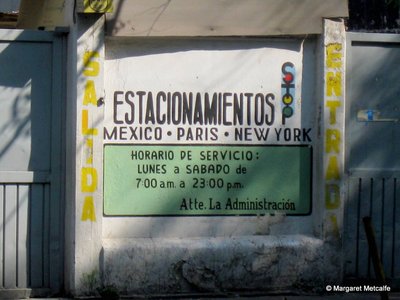 A small car park with delusions of grandeur 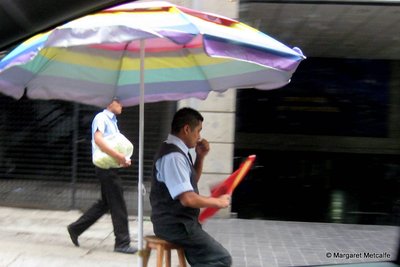 Waving a red flag to catch your attention

3. If you go to some shops, they may have a few parking spaces controlled by a "waver and whistler". He'll help you find the space (there are usually less than 10 spaces so it isn't actually very difficult), watches over your car while you're in the shop and then whistles you out. A few pesos will bring a smile to his face and a cheerful "Que tenga una excelente tarde, señorita" which more or less translates as "Have a wonderful afternoon, miss!"

4. You may find a street taken over by franaleros or car watchers. Although stationed on a public way, they act as if they own that particular stretch of street, putting buckets or other items in the road to prevent anyone stopping there by mistake. They then stand in the road and flag you down and offer you a parking space. You are expected to give them a tip for watching your car and making sure nothing happens to it. Some can be aggressive and you may find that if you omit the tip or don't pay enough, they will do something to your car. I sometimes make use of a franalero's service if I just need to pop in to the bread shop to get a couple of baguettes. He watches over my car while it's double parked and keeps the tow truck away for a few minutes. 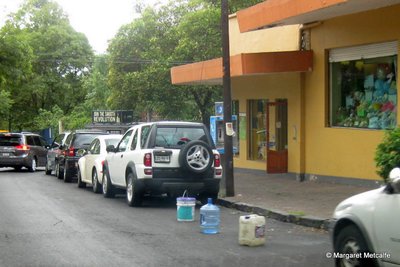 5. Valet-parking is an upscale luxury in Europe but in Mexico, nearly every establishment of a certain size or importance offers this service. You may see a small stand outside the shop, restaurant or office with an umbrella over it accompanied by a group of boys or men, some of them smartly-dressed. First-time visitors to Mexico City usually hyperventilate when they have to hand over their car and the keys to some stranger for the first time and watch them drive their vehicle out of sight down the road. Will they ever see it again, is the thought that hammers away worryingly in their brain for the next hour or so as they have their meal, go shopping or do some other errand. It seems incongruous that, in a city where an average of 62 cars are stolen every day, you can willingly hand over one of your most expensive possessions to a man you know absolutely nothing about and hope to ever see it again. It certainly isn't in keeping with all the stories of corruption, violence, armed robbery or kidnapping. And yet Valet-parking is a safe option... or at least we have always been given our car back. The men either take your car away and park it for you, or they may even drive around looking for a space along the crowded streets and then swap it for an outgoing car. It saves you time and energy although you may have to wait quite a while for them to reappear with it. I sometimes wonder if they forgot where they parked it, like I do. 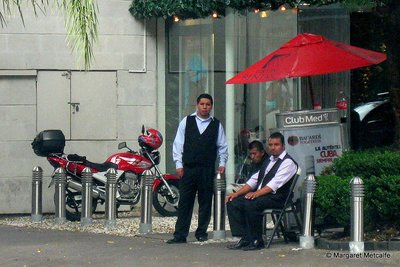 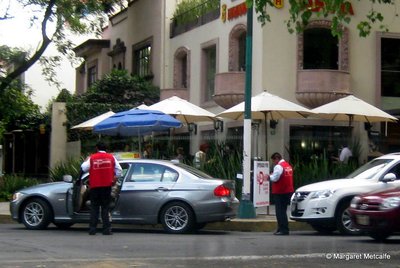 Taking care of the cars

6. Some restaurants and offices in well-sought after areas with reduced parking facilities have come up with a novel idea. They use a system of double-decker parking racks. You leave your car and keys with them and they park and un-park the guests' cars as and when they need them, shuffling them around, and moving them up and down. 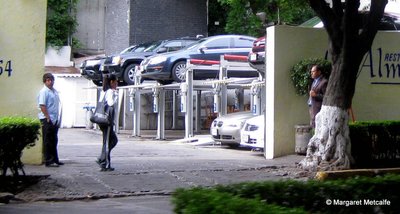 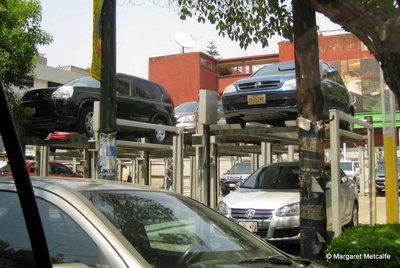 Which one is your car?

7. Of course, there is always the possibility that you may actually find a space to park along a street. Just make sure there is no E sign crossed out (E = Estacionar) and that you are allowed to park there or you may come back and find you have a flat tyre or your car has disappeared without the slightest trace. Like I did. Or depending on the area you are in, there may be clear evidence when you return that someone tried to nick your wheel trims. Like they did to mine. Or even that they have tried to force their way in and your key no longer works. This has happened to me. The electronic key has never worked since. 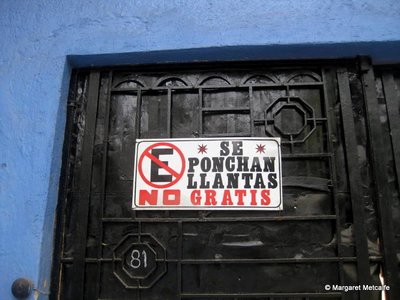 One piece of advice: I have learnt in the almost two years I've been living here not to underestimate the grua or the tow-truck. It is not a pleasant experience to have your car towed away.

Someone's lost their car to the grua.... 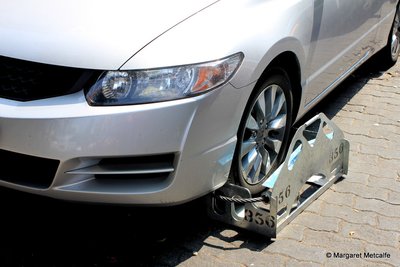 The first time it happened to me (unfortunately 3 times to date), I had accidentally left my debit card in a cashpoint machine. I drove round the block, remembered, and returned to the bank. Parking along the side of the road like all the other car drivers, I nipped into the cashpoint. To my dismay, the card had disappeared and hadn't been returned to the bank. I checked my car outside and then went in the bank to report and cancel the card. Surprisingly, just 10 minutes later, I emerged triumphantly with a totally new card (it takes a week back in Spain) feeling in awe of the banking system which had just zoomed up a few notches in my consideration. My feeling of amazement immediately turned to horror. My car, along with the ice-cream, butter, yoghurts and the rest of the weekly shopping, had vanished into thin air.

I checked the pavement to see if there was any sticker left by the tow truck saying where they had taken it to. Nothing. My heart began to beat faster as I then realised it must have been stolen. Obviously one of the 62 cars that day. And I'd only had it a couple of months. A man was standing by a car nearby so I decided to approach him. Had he seen what had happened to a small black car parked here? Sí, señorita, la grua se lo llevó", he said. "It was towed away". But why only my car? What about all the other cars? He proceeded to point out a beefy-looking bouncer standing on the other side of the street. "Tiene que darle pesos. Sino, llama la grua." If I didn't grease his palm, he was in collusion with the tow truck people and called them. I was learning the hard way. The man added, "That's why I'm standing here by the car while I wait for someone in that office. Otherwise they would tow it away."

I was unsure as to what to do next. Where do you find a towed-away car in the middle of Mexico City? After consulting a fair number of people, it seemed most likely that it would have been taken to one of two corrales. Josep was incomunicado in a meeting, and I rang Cristina and Marc at home to let them know why I was taking so long. "Mum, say it again. What have you lost? Your card or your car?" "Both!", I managed to blurt out before the cell phone died on me. A policeman told me where to go but said I should take a taxi. It was too far to walk. I'm glad I listened to him. He hailed one for me, explained my dilemma and off we went. The taxi driver said he would wait outside the corral until I was sure my car was there. It wasn't a nice area for me to be left stranded in. He went on to give me a grisly account of the 9 times he had been atracado, asaltado, herido (assaulted with injuries). He showed me the scar left on his head from one of the incidents. A gun had been put to his head twice and his taxi stolen twice. I was getting more nervous by his stories than by the thought of never finding my car again.

Three and a half hours later, after I'd had to call Joseo to get papers I hadn't even known existed and paid the fine, I peeled off numerous sticky white papers from the doors and petrol tank cover and drove my car home. The ice-cream had melted in the hot midday sun, the youghurts had curdled and the butter was dripping all over the contents of the shopping bag. But I had my car back.