Here are a series of photos featuring reflections, taken in Mexico City:

1. Reflection of church in window

The Spanish colonial legacy is evident in thousands of buildings here in Mexico City, such as the Templo de La Profesa 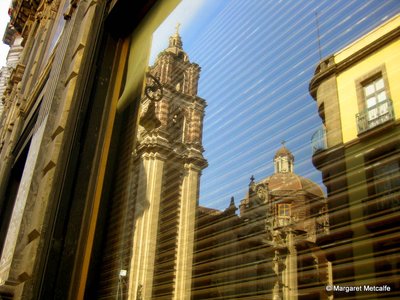 A wonderful place to go for an early morning walk is to this lake, where the Restaurant El Lago is located. 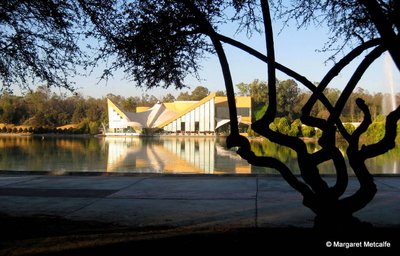 The famous green and white taxis were replaced just over two years ago with the burgundy red and gold colours. Changes in colour are an attempt to get rid of "pirate" taxicabs. 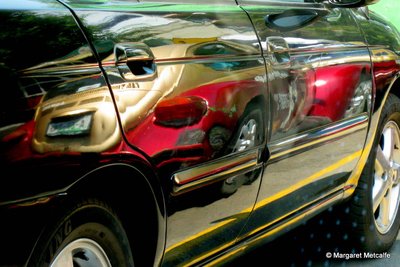 One of the modern shopping centres with lots of eating places, which fills up especially at lunchtime. 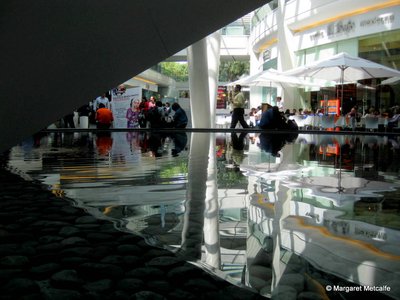 A lot of people get up early and walk, jog or run around the lake 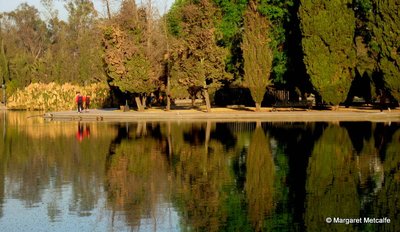 6. Monumento a la Revolución reflected in nearby building

This Monument was renovated and the square given a complete face-lift, ready for the celebrations of the Bicentennial of Mexican Independence in September 2010. Below the monument is the Museo Nacional de la Revolución. 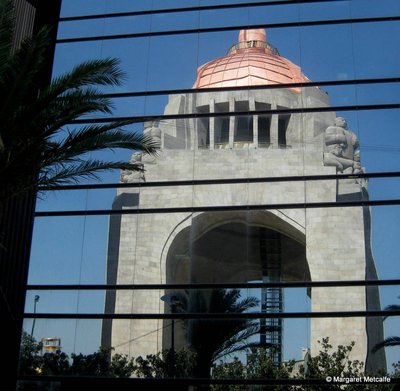 The jacarandas start to bloom at the end of March, turning the city purple. 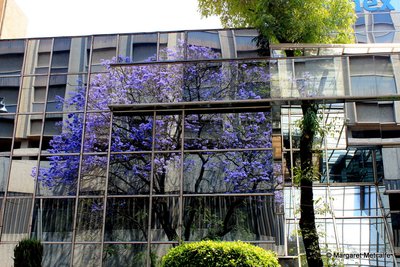 A nice quiet place to sit on Sunday morning, away from the crowds in the nearby Alameda Park 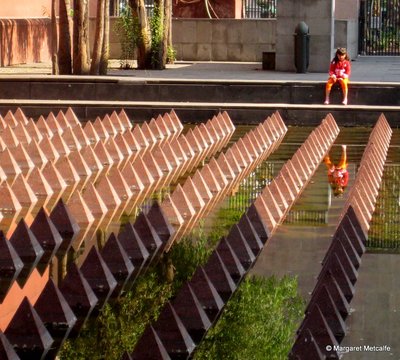 9. Reflections in the lake

This is the largest lake in Chapultepec Park and a popular place to go boating. 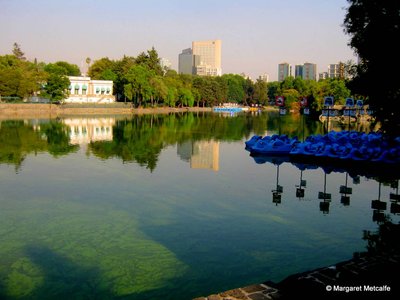 Plaza Carso is becoming a new area in Polanco with modern offices, up-market residential blocks and the new Soumaya Museum 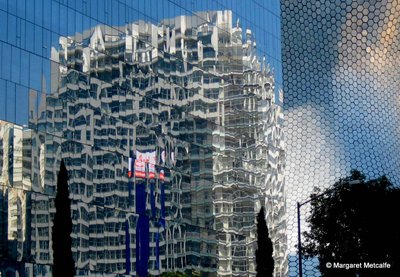 On Sundays, people sail model boats on the pond. 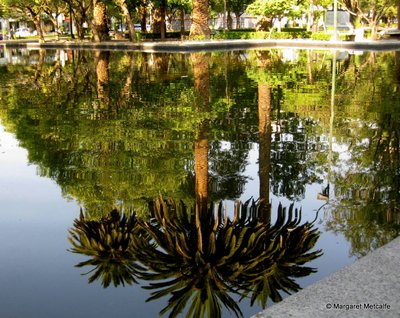 12. Ducks in the early morning sun

Some of the many ducks on the lake 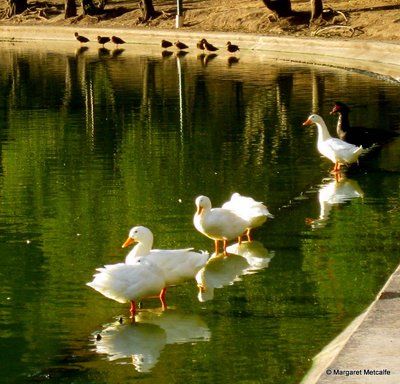 This monument has six marble columns representing the six military cadets who defended the Antiguo Colegio Militar (now the Castle) with their lives. 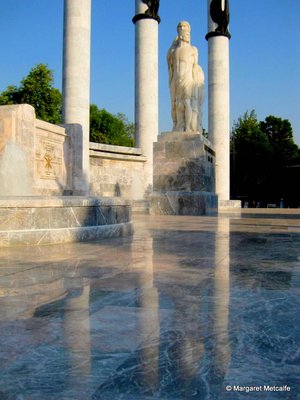 14. Reflection of the Iglesia de San Juan de Dios in window of the Franz Mayer Museum

This small church, not very well known, has a very unusual façade. 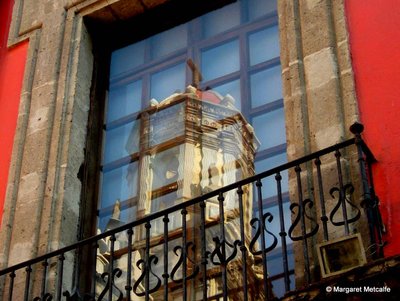 The Museum in the background is dedicated to genocides, tolerance and diversity and was opened at the end of 2010. 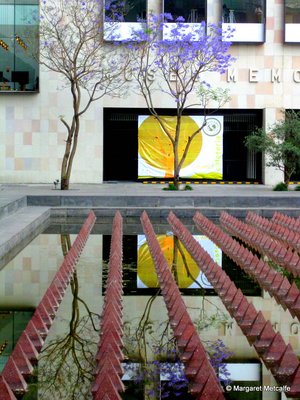 16. Palacio de Bellas Artes reflected in the window of El Palacio de Correos
The Fine Arts Palace is the most important cultural centre in Mexico City, hosting music, dance, theatre, opera and literature events as well as containing murals painted by the most famous names of Mexican muralism. 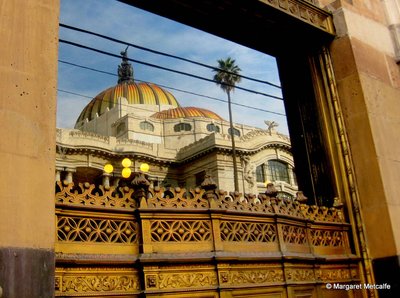 17. Reflection of part of the Fuente de Tláloc 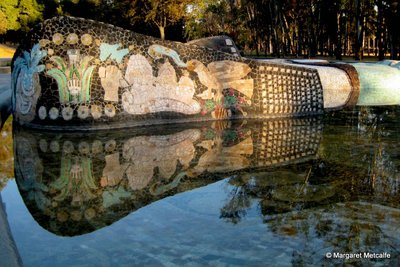 18.Reflection of church belltower in a puddle

The Templo y Convento de la Concepción leans at all angles due to the soft ground it was built on. 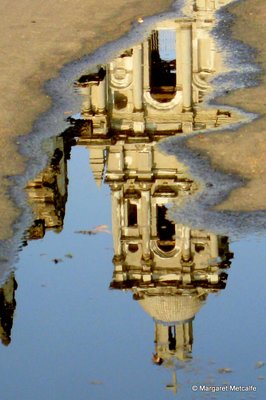 19. Reflection of trees in car window

Chapultepec Park is the "lungs" of Mexico City and the largest city park in Latin America. 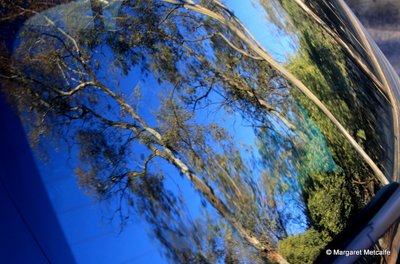 The distinctive silhouette of the "Twin Towers" in Polanco can be seen behind the lake. 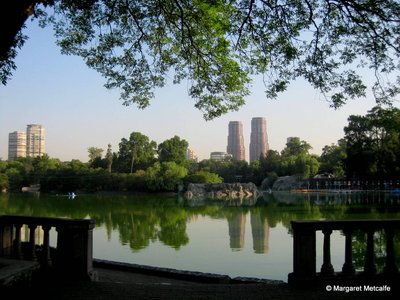