Popocatépetl... the name rolls smoothly and easily off the tongue of a Mexican. For the rest of us, it's like a mouth full of dry crackers and nothing to drink. It gets stuck somewhere between our tongue and our throat and never sounds like it should. Popopatec...Popocapet... Popo..... Let's just call it "Popo" for short, like the locals affectionately do. In Náhuatl, the ancient language of the Aztecs, the name means "Smoking Mountain".

Popocatépetl is a volcano and, with its symmetrical cone-shape, looks just like the volcano you may have drawn in your Geography class at school. What's more, it's active and lies just 55 kms from Mexico City. On one of those rare days when the nata (layer of contamination) is skimmed off the valley by the wind, you can see it standing head and shoulders above the city and in the winter, its peak looks like it's been dipped into thick white frosting. At 5500 m (17,886 ft) high, it is the second highest mountain in Mexico and even has permanent glaciers at the top. 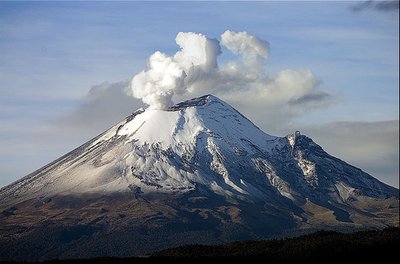 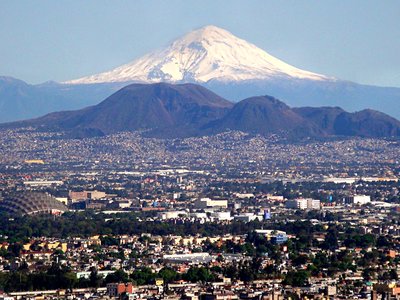 "Popo" has been in the news over the last few days. On Friday 3rd June, early in the morning, it began to stir and sent out a fumarola of gas, vapour and ash over 3 kms high, tinged a spectacular red and pink by the sun's rays at dawn. It was expected to start spitting out a few fragmentos incandescentes and the crater could be seen glowing that night. The newspapers reported that the area was on Yellow Alert. No-one could go within 12 kms, and those living close by were told that in the event of further ash emissions, they should stay indoors, put a cloth over their mouth and nose and not try to wash away the ash. It would solidify and block the drains. What about airplanes? They continued to fly in and out of the Valley, landing and taking off at Mexico City Airport as usual. No worry about the ash getting stuck in their engines, not like in Europe when the Icelandic volcanoes put on their show. 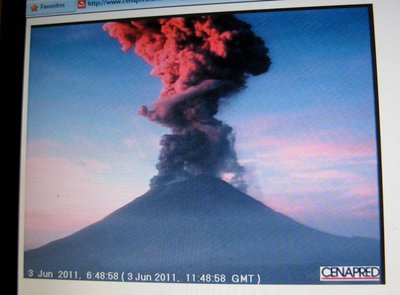 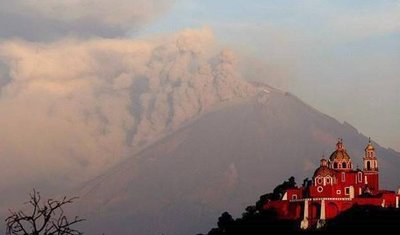 Ash from volcano with monastery in foreground (Photo: El Universal) 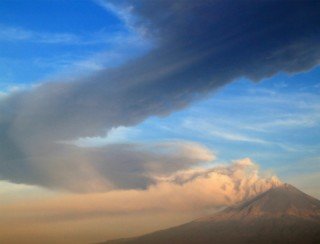 According to an Aztec legend, Popocatépetl is a brave warrior standing watch over his sweetheart, Iztaccíhuatl ("White Woman" in Náhuatl), another volcano nearby whose name sends me rapidly into dislexia. I call her Izzy for short. She used to be covered with snow which could be seen for hundreds of kilometres around but unfortunately is now losing her white mantle due to global warming. With a bit of imagination, you can make out the silhouette of a sleeping woman in its contours. Legend says she died of a broken heart when they sent her beloved Popocatépetl off to war to certain death. He came back but found her dead and now stands watch over her body, occasionally fuming. A sort of Mexican Romeo and Juliet story. 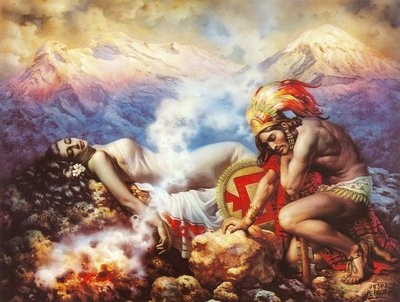 Legend of the warrior and his sweetheart