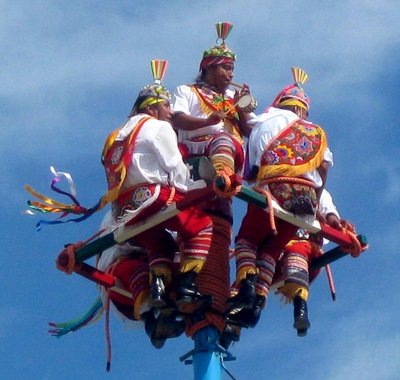 Voladores about to perform their ritual

If you drive or walk along Paseo de la Reforma, with the Museo Nacional de Antropologia on your left, look up and you'll see a tall thin blue pole poking above the trees in Chapultepec Park. Depending on what time of day you're passing by, you may see some men sitting atop the small platform, dressed in brightly coloured costumes. These are not modern-day bungee jumpers. They are the Voladores de Papantla, ready to perform their spectacular flying dance. 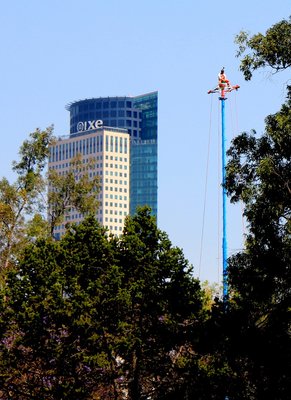 Volador on pole with the Torre Mayor in the background

What are they doing at the top of the 30m (100ft) pole with no safety net below? If you arrive at the beginning of their ceremony, you will witness an ancient ritual. Dressed in bright red and white costumes, with a crested head-dress and coloured streamers, the men first of all do a small dance at the bottom of the pole to prepare the ground. Then one by one, five men, four fliers (voladores) and a musician, climb to the top of the pole. At the top, on a small revolving platform, the voladores tie their ankles to ropes wound around the pole and then at the appropriate time, they plunge off and fall down head first, "flying" gracefully in circles. With their arms open wide, they glide down to the ground and finally return to the standing position. The fifth man remains at the top playing a hand-made wooden pipe and drum. The pipe represents a bird singing and the drum represents the voice of the gods. 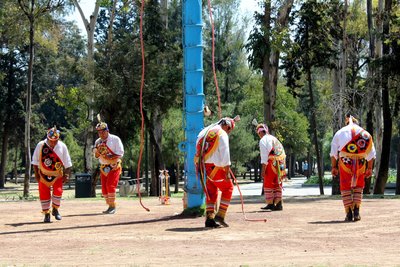 Preparing for the flight 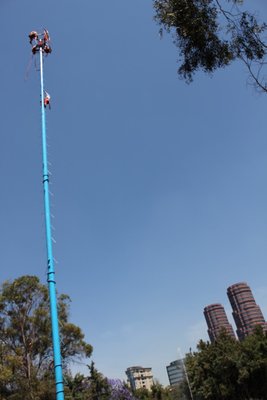 Climbing up the pole 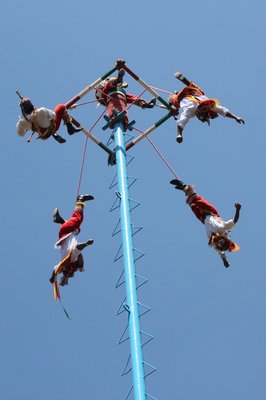 The four fliers jumping off 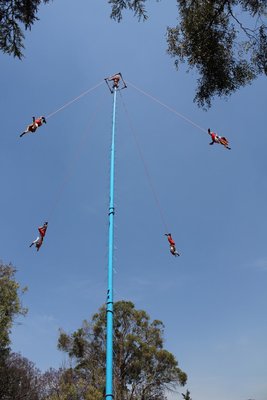 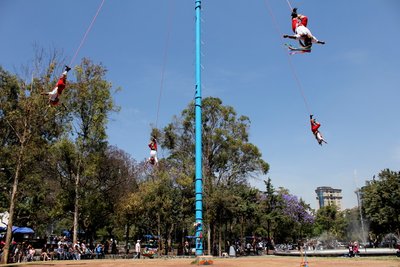 Swinging round in circles 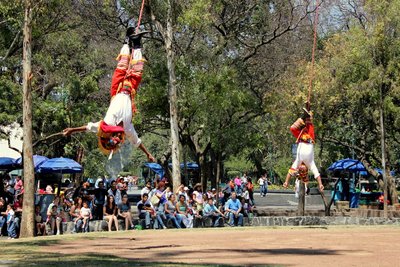 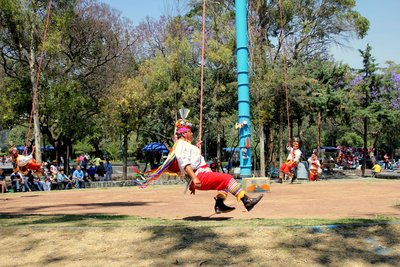 Returning to the standing position 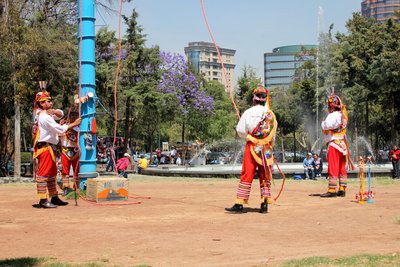 The Voladores are Totonac Indians and the origin of this ritual dates back to pre-Hispanic times. According to legend, the gods said to man, "Dance, we will watch". So the Indians perform this spectacular dance to please the gods. The dance has a specific meaning. Each volador circles the pole 13 times before reaching the ground, multiplied by four, making a total of 52. This symbolises the 52-year cycles of the ancient calendar. The pole represents the vertical connection between the Earth, the heavens above, and the underworld below. The dance also symbolises the four cardinal points - the four corners of the platform, the four voladores and the musician turning to the east, south, west and north as he plays. 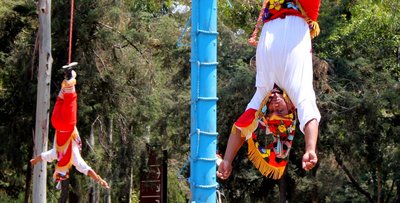 Although originally a spiritual ritual performed on special dates, the Dance is now performed in places all over Mexico for tourists too. In Mexico City, they regularly plunge off their pole which is hidden among the trees in front of the Anthropology Museum. Many people combine a visit to this excellent museum before or after watching these brave fliers.

It makes an interesting contrast to watch Totonac Indians repeating an ancient pre-Hispanic ritual, centuries old, with a backdrop of skyscrapers and even airplanes and the roar of the traffic just metres away. And yet somehow while watching them gracefully fly down, you forget totally about city life for a few moments. 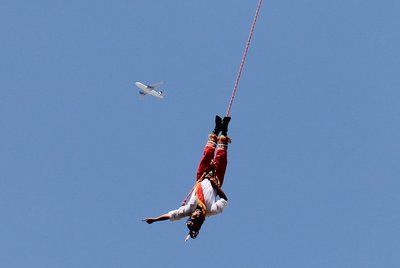