What's yellow, smokes and wakes you up in the morning?

It's 6.30 am and the sky is still inky black as we leave the house but the city is already asitr. In every neighbourhood, scores of wheezing, rattling yellow buses are doing the rounds, picking up kids to take to school. We stand at the end of our road waiting. Three other yellow buses pass by, going down the roads on their route. A high-pitched beep...beep...beep...beep...beep...beep slices through the dawn's silence. The bus in the next street is reversing the entire way down to the end of the no-through road with its accompanying warning noise waking up the sleepers. There's no room to turn around or manoeuvre so that is the only way to get to its pick-up point. That early-morning beep...beep...beep...beep...beep sound is etched deep into my memory. It will forever remind me of our years in Mexico. 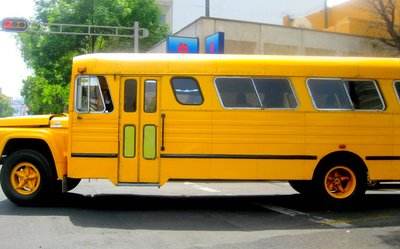 Our school bus arrives, manoeuvres itself into a position diagonally across the road (regardless of whether there are any other cars around), opens the door and when my kids are on, begins to reverse into the side street opposite. Beep...beep...beep...beep...beep it goes. Off they disappear, on what I call their "guided tour" of Mexico City. It will take them 35-40 minutes to arrive. Most of the others on the bus are sleeping in their seats, with their own music piped into their ears to drown out the driver's dubious taste in radio programmes.

I walk our dog, Ozzy, down to the main road. Yellow buses, some with smoke pouring out behind, are hurtling down at a speed which is only possible at this time in the morning, when the traffic still hasn't thickened. I try not to imagine what what could happen if a rather slow vehicle gets in their way. My children are on a bus like that too. 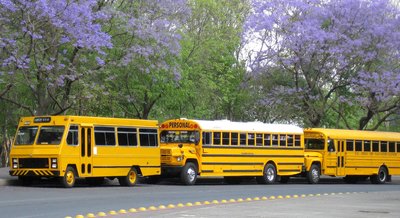 I think back to when we arrived almost two years ago. A few days after our arrival, I went to visit the school and met the señora in charge of school transport. "El camión llegará a su calle a las 6.46", she said. Literally, she had just told me that the TRUCK would arrive at our street at 6.46 am to pick up Cristina and Marc and drop them off at school. I blinked rather quickly as I tried to digest what she'd just said. So our kids have to sit in the back of a TRUCK to get to school? Not only had people told us that life in Mexico City was dangerous, I'd seen how the truck drivers drive! "Don't they go to school in an autobus?" I asked innocently. She stared at me for a moment with a puzzled look, then clicked and burst out laughing. "Oh, of course! In Mexico we call buses trucks!" I was relieved.

Three days later, Cristina and I were standing at the end of our street waiting for the bus to pick her up and take her to her new school. We waited and waited. No yellow bus came with the school's name on it, like the ones we'd seen parked in a long line outside the school. We waited a bit longer. All of a sudden, it dawned on us that maybe the small white minivan we'd seen pass us was the school bus. As we ran after it, it disappeared into the distance and we could just make out the school's name on the side. Too late. She missed the camión, the bus, on her very first day of school. Not a good way to start. 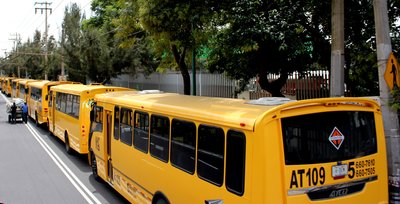 At that time, we were living at a different address. As I went for my early-morning walk around the streets, having got the kids off to school, I encountered lots of these yellow monsters thundering down the almost empty roads, reversing down steep streets which dropped off into the gully below, or churning out smoke while they waited for their young passengers to emerge sleepwalking from their houses. Here in Mexico, you don't go to the bus, the bus comes to you. Which is why it takes so long to get to school. They wait for a few minutes at each person's house to give them time to grab their bags, kiss their mums goodbye and rush out. Those who unfortunately live furthest away have to catch the bus at 5 am.

One morning, one of these enormous buses, with apparently just half a dozen sleepy passengers, tried to turn a corner near our house. A lady had very unwisely parked her car on the corner, making it impossible for a bus of those proportions to squeeze by. Despite the obvious tightness of the manoeuvre, I watched as the bus driver attempted the impossible. With a spine-chilling scraping noise (like fingernails running down the blackboard), he re-designed the whole shape of the car, leaving a gaping metal wound right down the side. I was curious as to what would happen next. He reversed a few centimetres until he hit the car on the other side of the corner and broke the front light, scraped the lady's car again and ploughed ahead until he came to a halt on the other side of the road. By then, the man vigorously washing the wheels of a nearby car had rang the doorbell of the lady's house. She appeared in curlers and a bathrobe, and aimed a whole stream of abuse at the bus driver. It was a good thing I didn't understand half of the Mexican expressions then. She looked like she was stabbing him to death with words. I turned and walked down the other way, and noticed that the kids on the bus had woken up and had their noses eagerly pressed to the window. I completed my circuit and arrived back 25 minutes later, to see the bus still there, the lady still shouting and the children obviously enjoying the fact that they were going to be late for school. 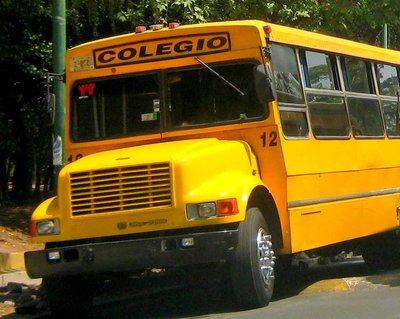