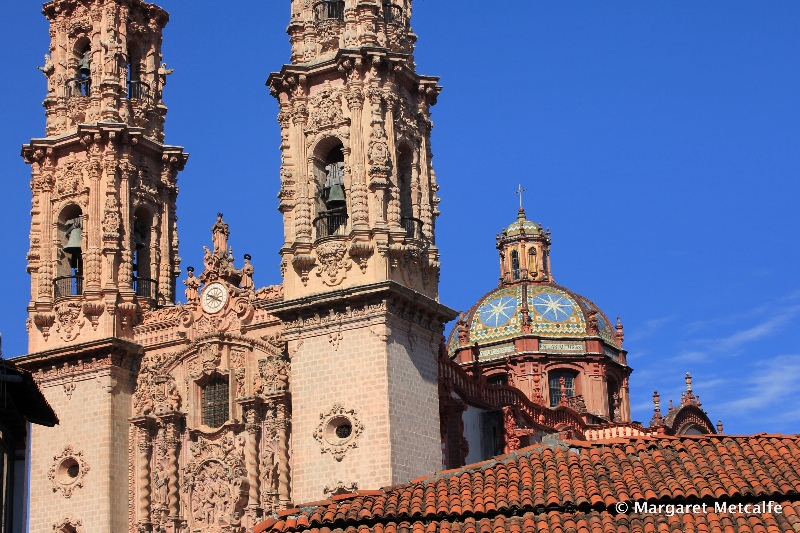 The heart of Taxco is Plaza Borda. Here, the town socializes. You can visit the church, eat in its restaurants, buy baskets and silverware, cool down with an ice-cream, stay in the hotels, rest in the shade, listen to mariachi bands, go to the bank or just enjoy a bit of "people-watching". It's definitely a good place to spend some time, if not some money. I was torn between trying to keep up with our guide or taking photos of everything and everybody around me in the square. There was too much of interest outside to move into the church too quickly. I let her go ahead with the others and decided I would catch up on the explanations later on. 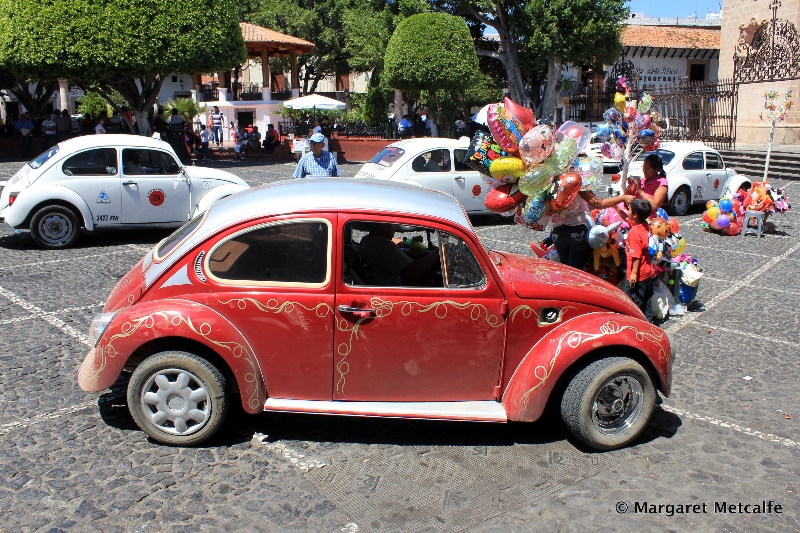 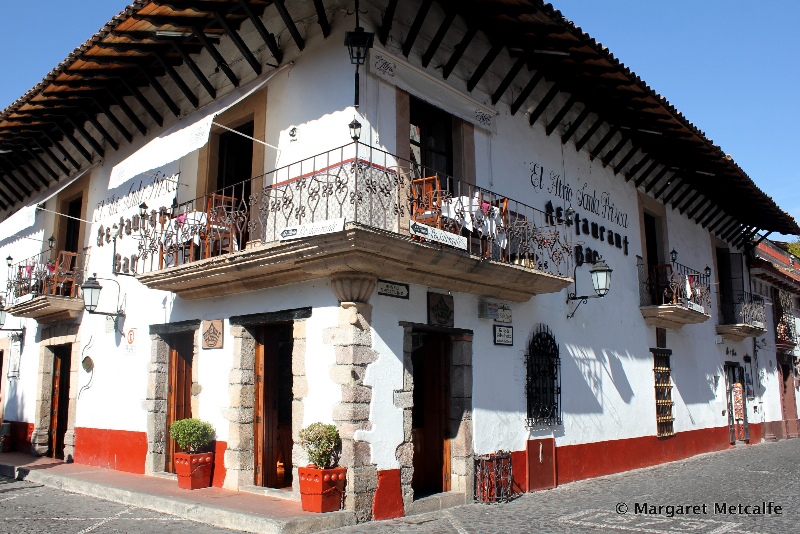 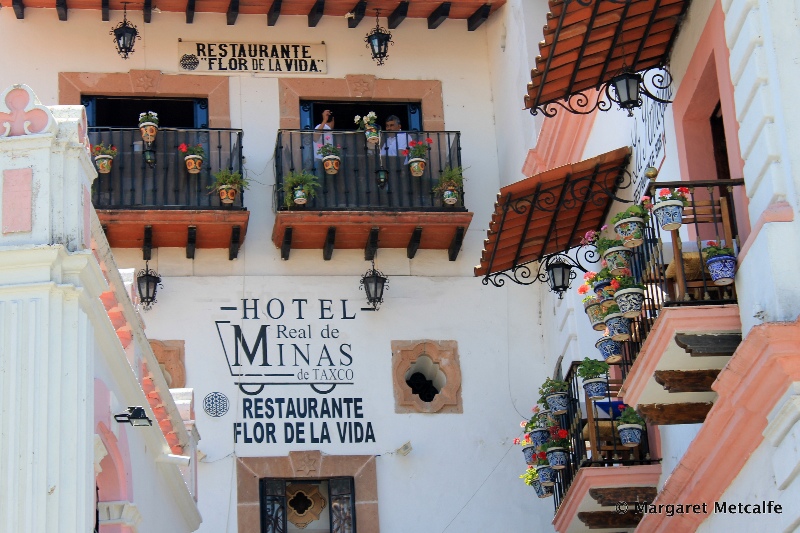 Santa Prisca is Taxco's outstanding gem. Even the tall shady trees in the square can't hide the slender pink bell-towers, riotously ornate where they touch the sky, or the beautiful tiled dome. José de la Borda, deeply grateful to God for the prosperity of his silver mines, had this church built where his priest son would officiate mass. If this iglesia has a visible unity to it, that's because it was constructed in 7 short years, from top to bottom and inside out. So what you see is original, with nothing added on or re-done. I suppose a silver mining town like Taxco is bound to have a special work of art, given the wealth scraped out from the surrounding mountains. The interesting thing is that José de la Borda was a generous, humble man who was actually more interested in helping the community than accumulating wealth for himself. A rarity. A breath of fresh air. 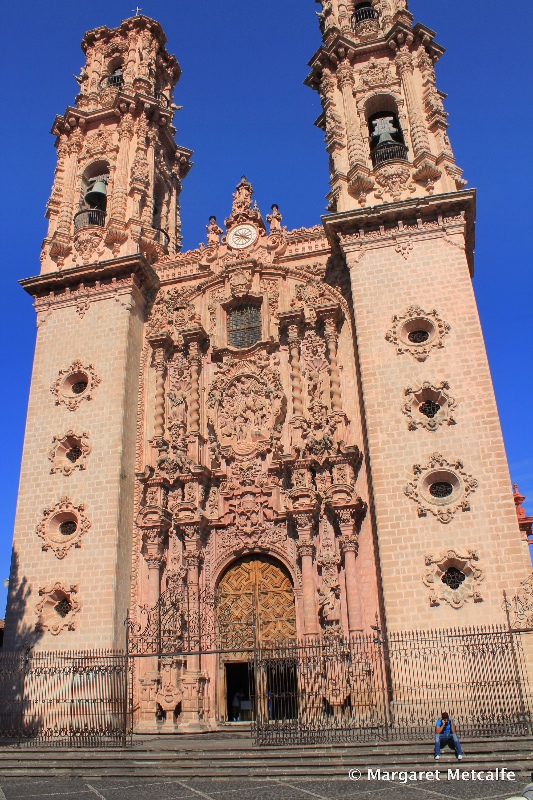 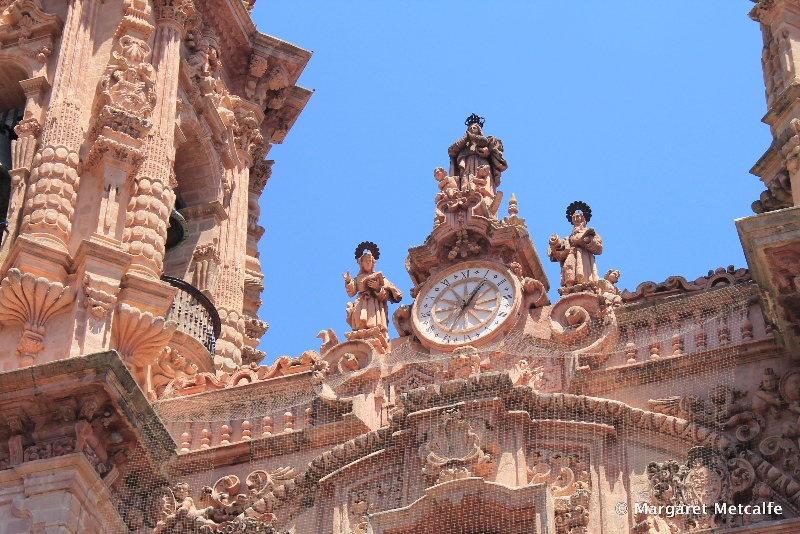 When I eventually stepped into Santa Prisca's cool darkish interior in search of my friend and the guide, I was overwhelmed. I realized that although I had been mesmerized by the outside, the interior was even more over-the-top, as Mexican Baroque churches usually are. To borrow someone's words, "The Mexican aesthetic is not classical and restrained but exuberant and colorful". Yes, "exuberant" is a nice way to put it. The stonework, like the exterior, was pretty pink. Surprisingly though, the town's silver has turned to shiny gold here. Its altarpieces are lavishly rich in saints and angels, as if all of heaven has gathered together in this small space. Now I'm not particularly inclined towards gold cherubs and saints and images of La Virgen Maria but I can imagine how, in the days long before books, televisions and computers were deeply rooted in society, churches like Santa Prisca probably weren't only temples of worship but also served to visually stimulate the mental activity and imagination of the population. Maybe it was a good place for mathematics too. I'm sure that more than one awe-struck kid would be trying to count how many cherubs there were on each altarpiece. 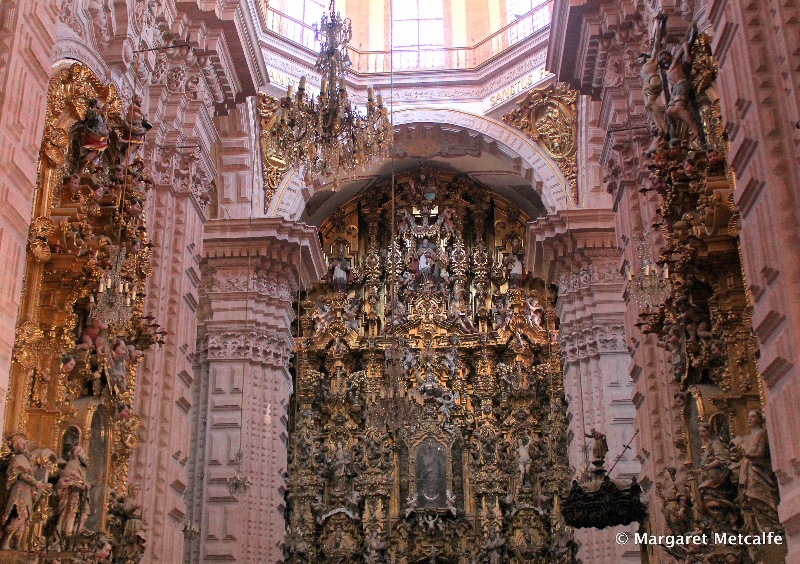 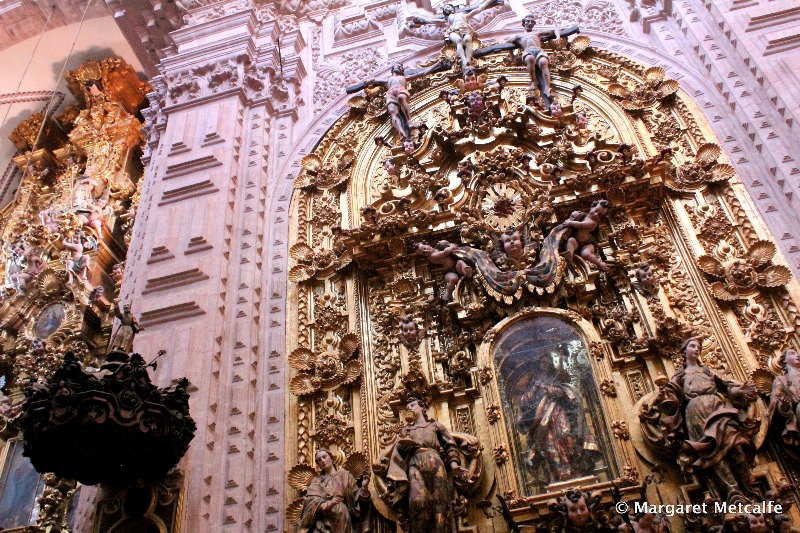 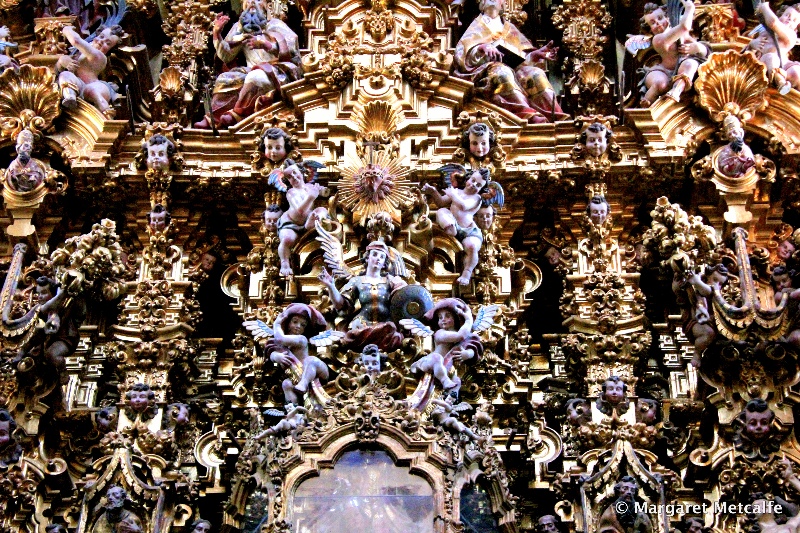 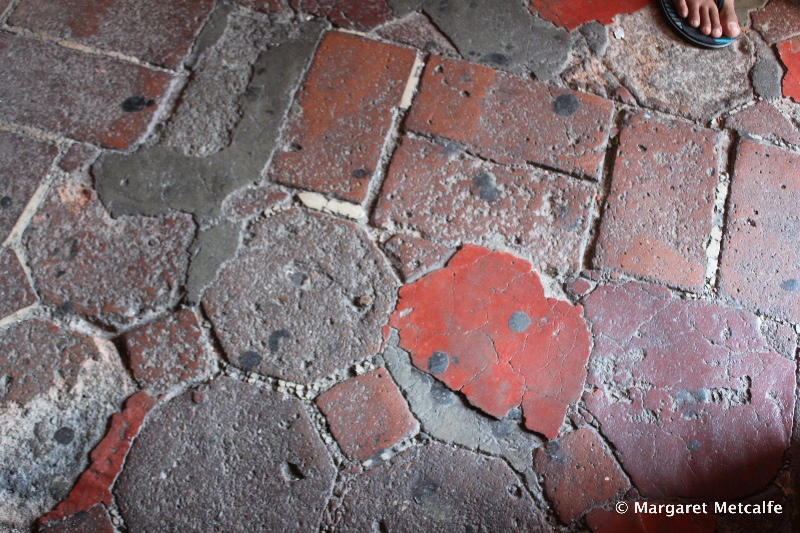 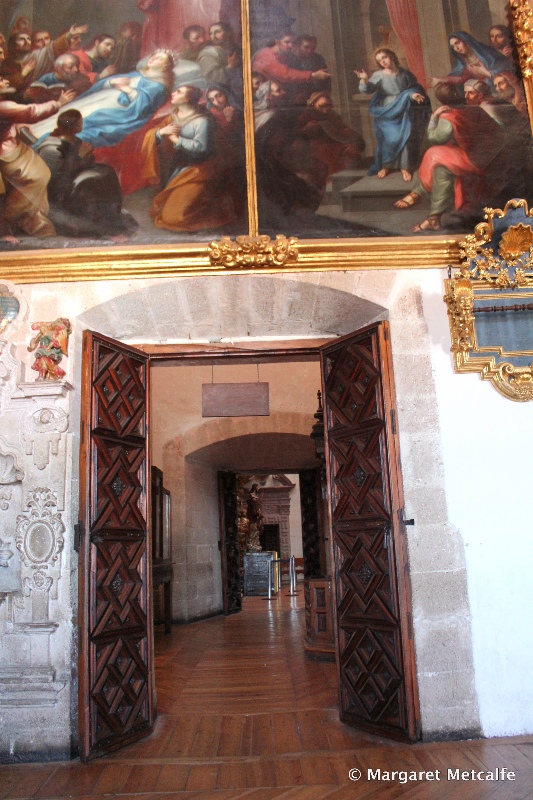 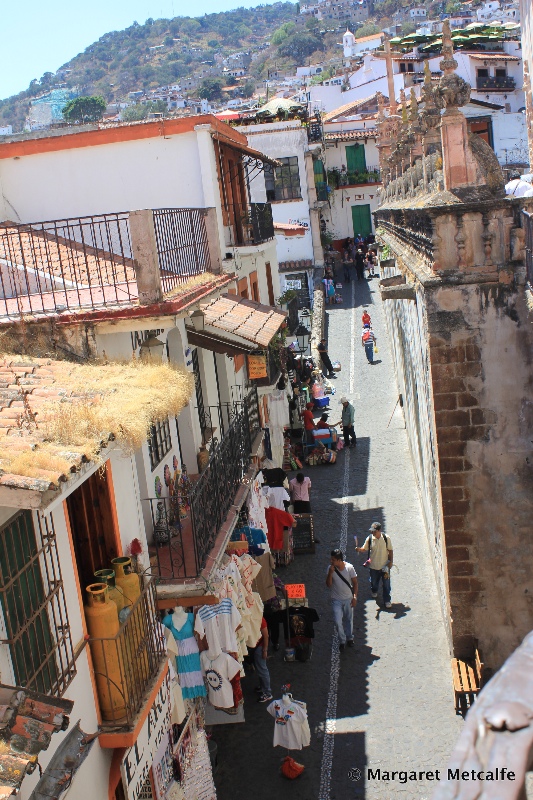 Outside in the church patio, I left the angels and saints and all that gold behind me and was brought down-to-earth once again. I met a mother and her two small children selling chewing gum. 1 peso for 1 piece of gum. I bought a couple and talked to them, wondering if I would ever have been able to get my young kids to sit quietly in the shade for a morning selling candy without running off and getting bored. I doubt it. But I watched this family and they seemed content to sit around for a long time in the shade, earning a few pesos. Just behind them another personaje caught my eye. Well, two of them to be exact... a nun with her small chihuahua dog, Bobby. She very kindly let me take their photo. Bobby had just had his bowl of water, indispensable in this hot sunshine. 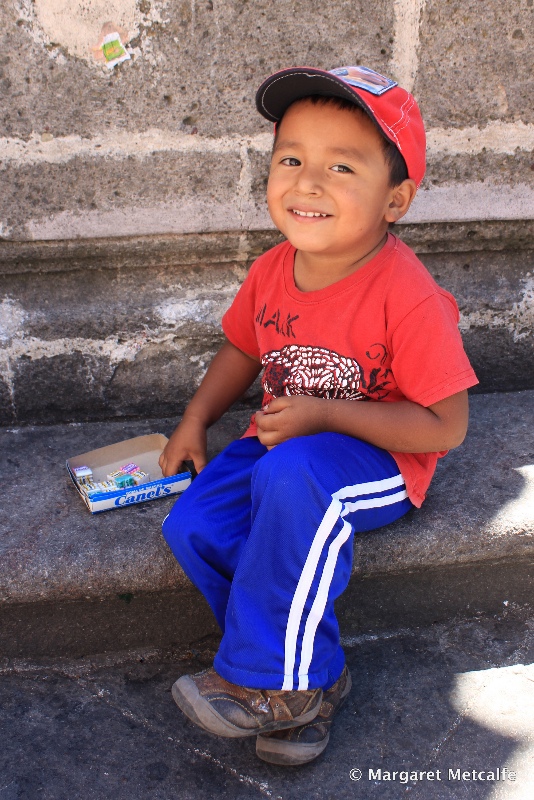 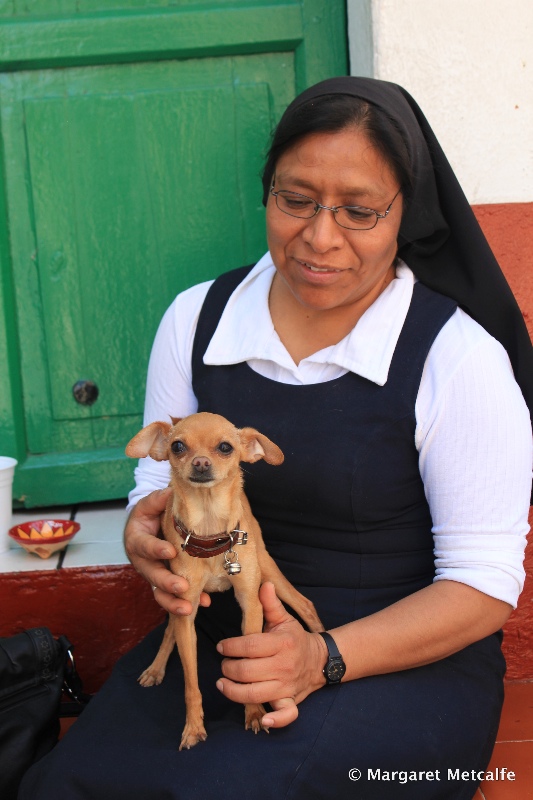 Watching Bobby lap up his water made me begin to dream of a cool beer and some energizing food. Luckily for me, the guide read my mind and pointed out the place where we would be having a pit stop. After a cool bottle of Victoria, a few glasses of melon-flavoured water and a plateful of typical Mexican food, we felt revived and had some time to explore the town by ourselves. 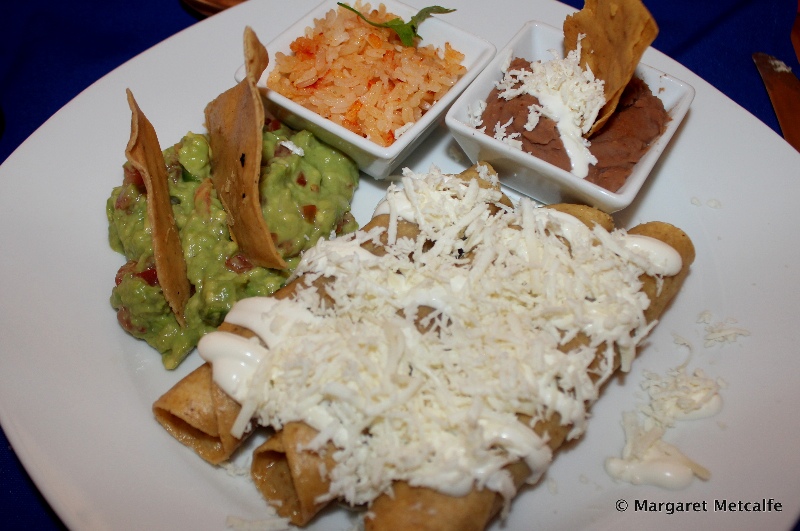 No matter where you go in this small town, there is always something to catch your attention, a small detail, an inviting shop or an interesting street scene. And somehow the towers of Santa Prisca magically appear wherever you go. It's almost impossible to get away from them. For a couple of hours, my friend and I strolled through the streets, nosed around the silverware shops, discovered small plazas with fountains or chatted to the street vendors who cheerfully offered us their wares. I could see it was going to be hard not to bring home a cargo of brightly-coloured baskets, hand-painted plates or silver items but in a commendable display of self-disciplined restraint, I managed to arrive back at the Turibus fairly light-weight without too much damage done to my purse. I took pictures instead. 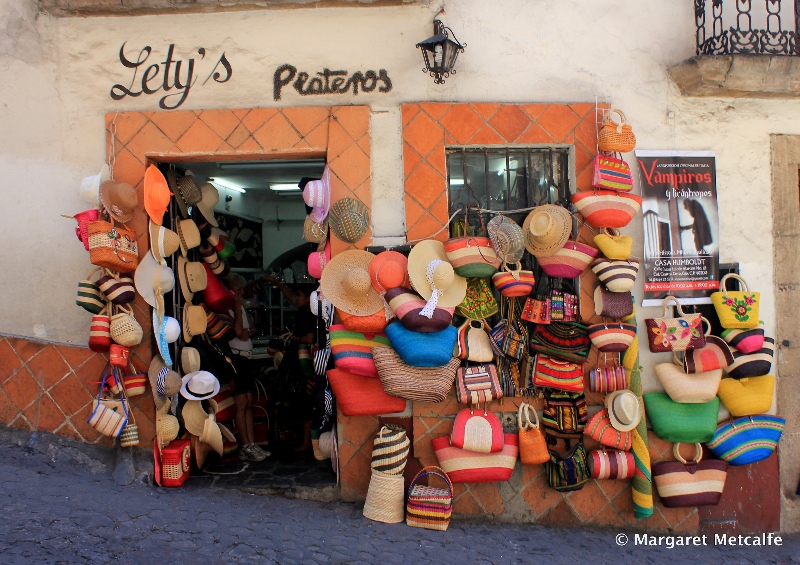 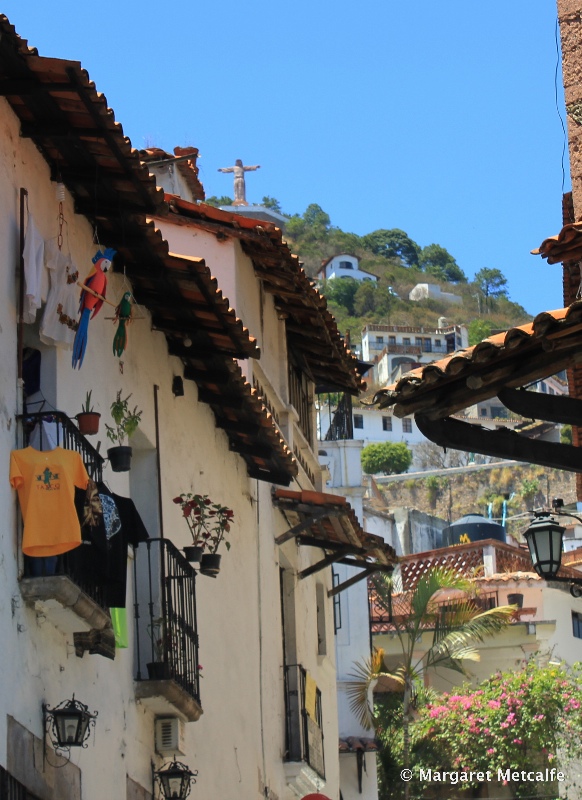 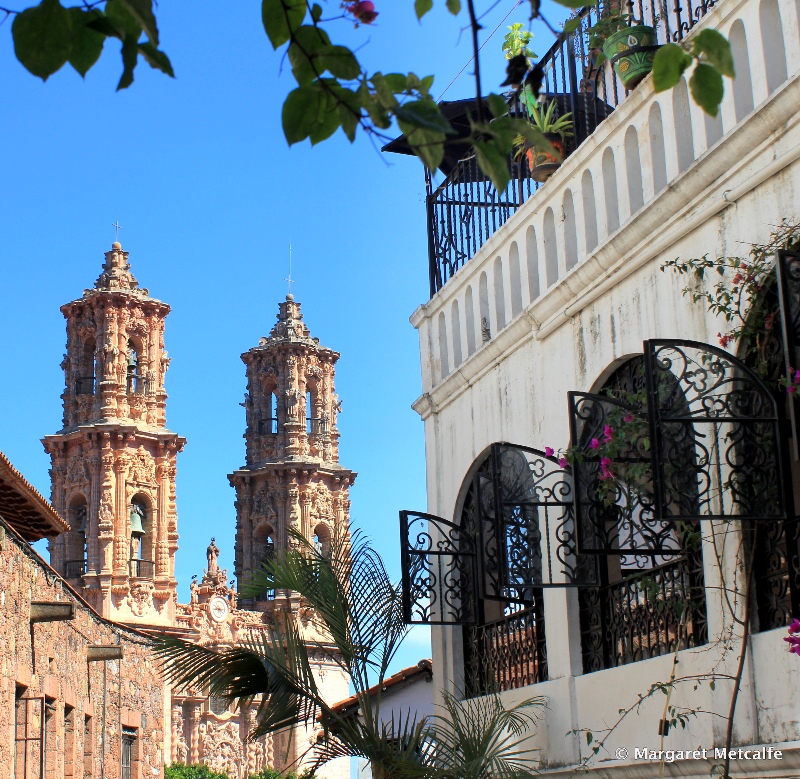 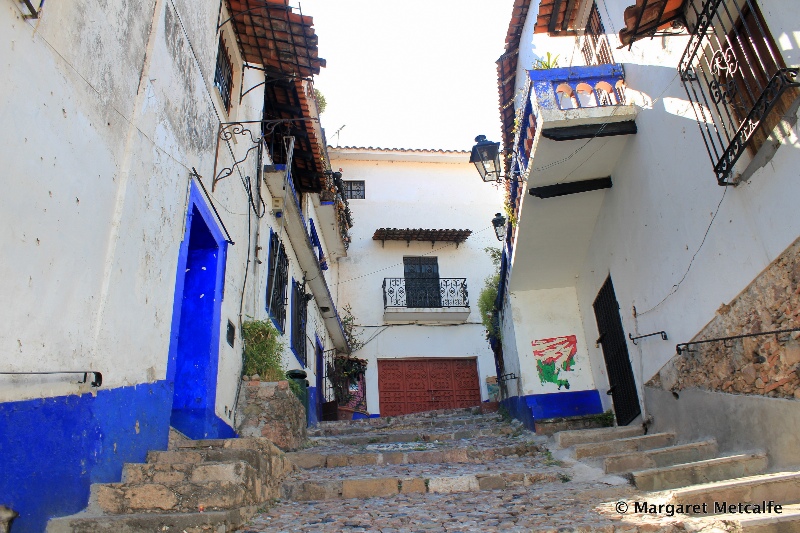 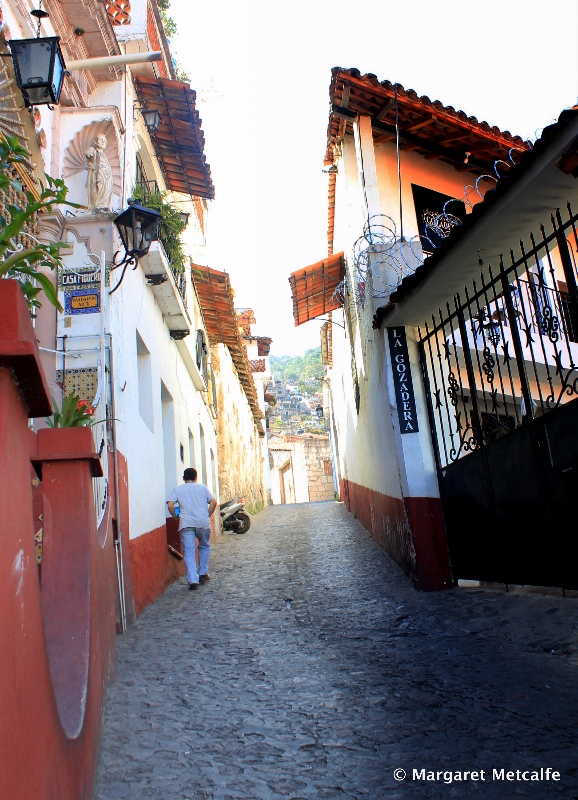 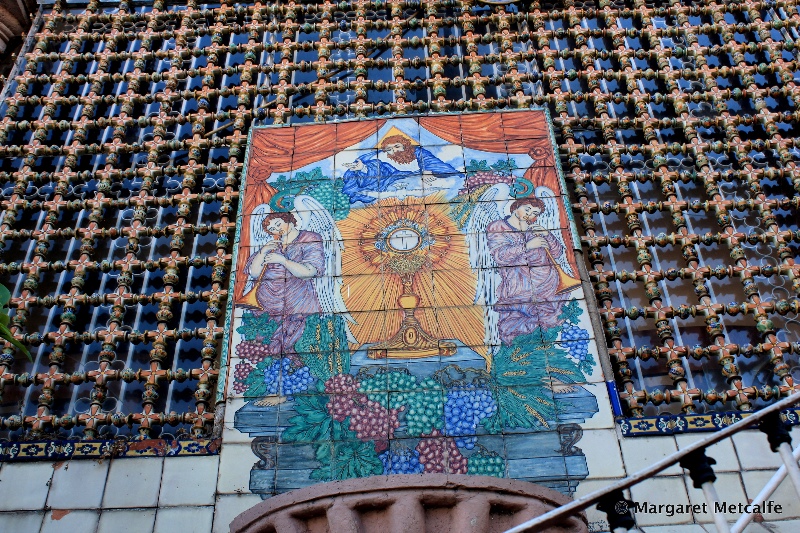 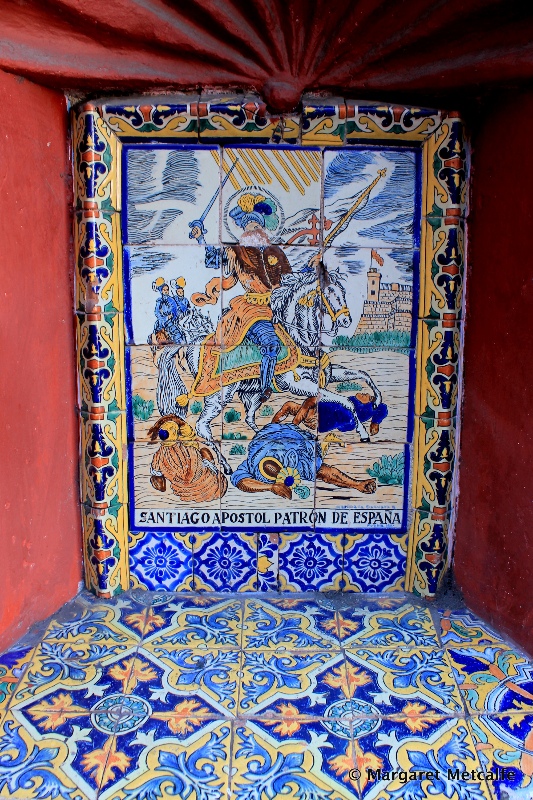 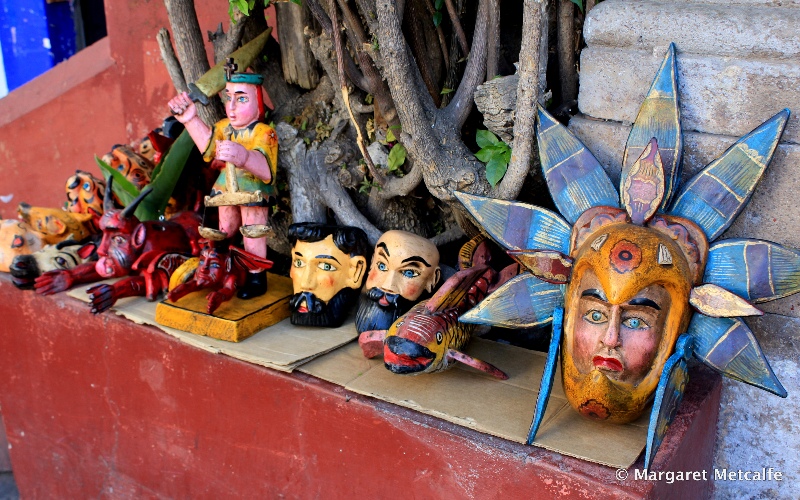 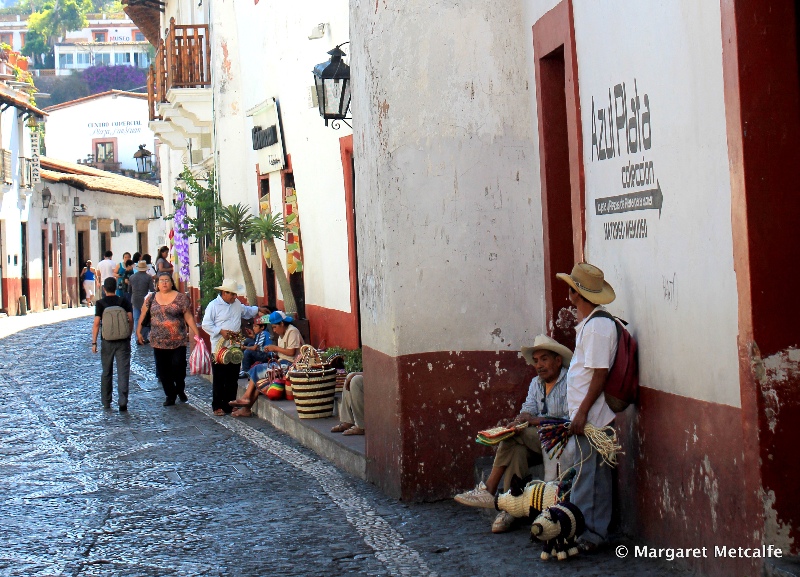 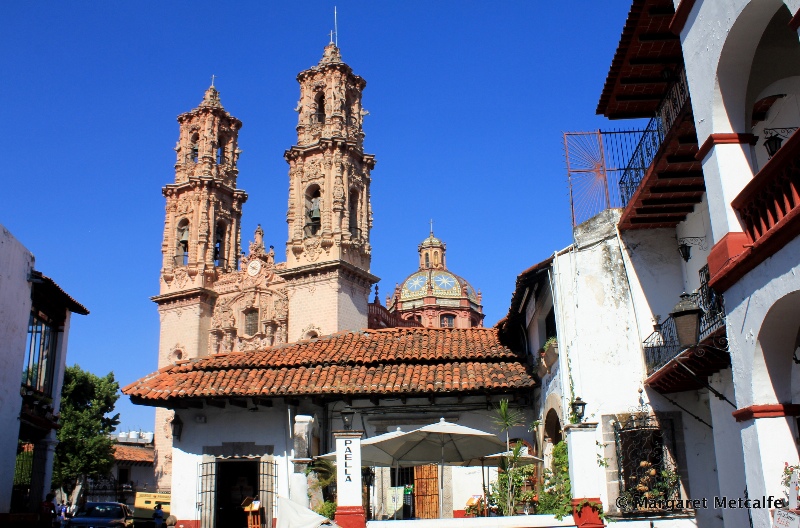 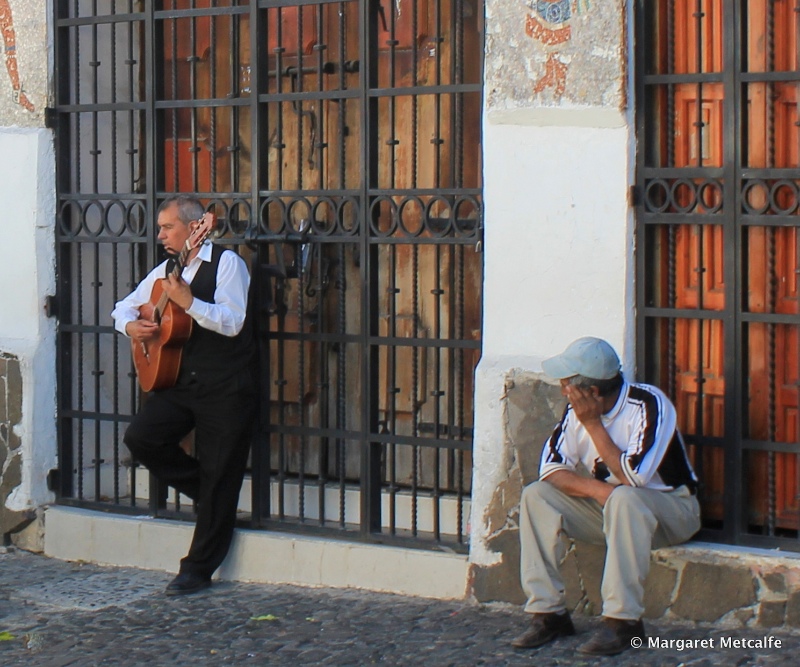 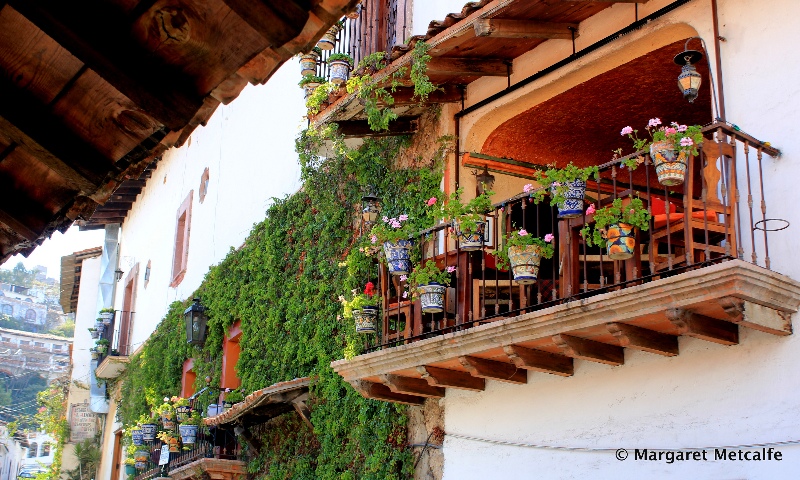 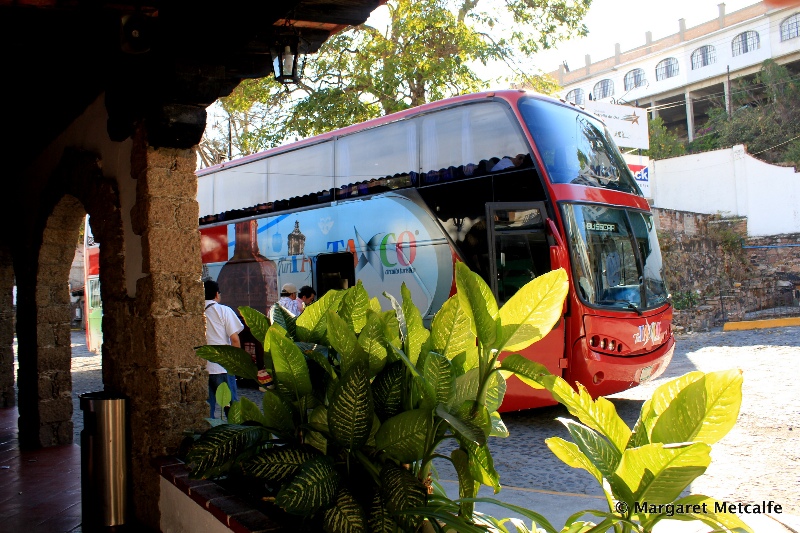 Perhaps the 3-hour bus journey back to Mexico City was necessary to a certain degree. It gave my feet time to stop throbbing and return to their normal size and also gave my mind time to digest all the details of our trip to Taxco, the sights we'd seen. This pueblo mágico had impressed me, more than I had expected. Before it got too dark, I even had time to snap a few more photos. 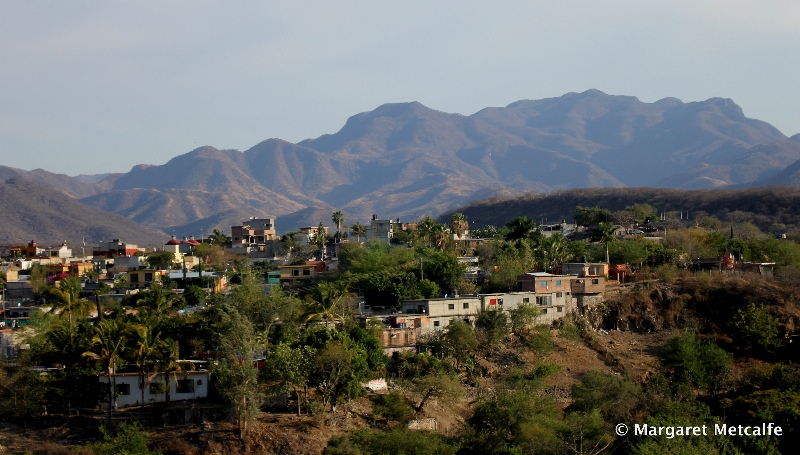 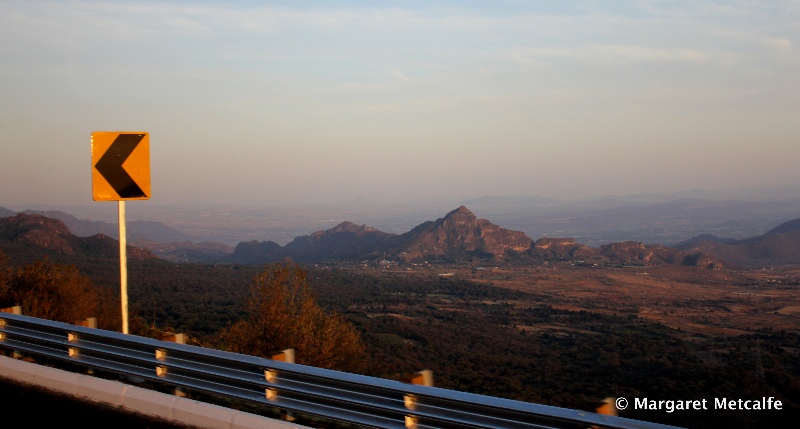