At the Basilica in Mexico City 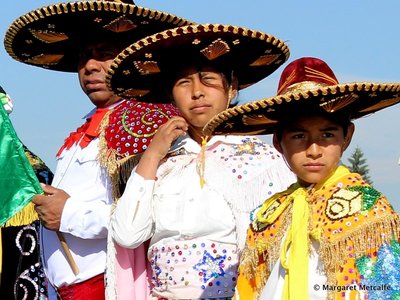 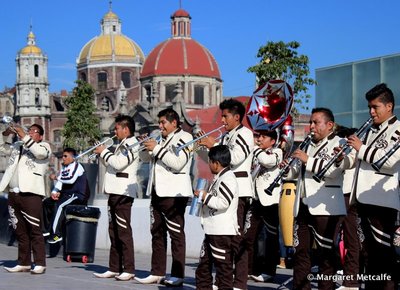 Whenever I cycle up to the Basilica early on Sunday morning, I wonder what surprise awaits me today. Being Mexico's most important Catholic shrine, the Basílica de la Virgen de Guadalupe draws Mexicans from all over the country who journey here to fulfill promises, to pray and make petitions, and to attend mass. Devotion to the Virgen de Guadalupe is an unmistakeable thread woven into the very fabric of Mexican culture. A whole community may arrive together in trucks, buses or cars. They often come wearing their traditional dress to honor the Virgen with a specific dance, or music. So when I arrive here on my bicycle, I often find the plaza a colorful study in anthropology. Sometimes on specific dates, it is full of hundreds of cyclists who have made their pilgrimage on two wheels or, in the case of last Sunday, lots of music bands who had arrived with their musical instruments.

Last Sunday was a truly colorful, musical day to visit the Basilica... I'll let my photos speak for themselves. 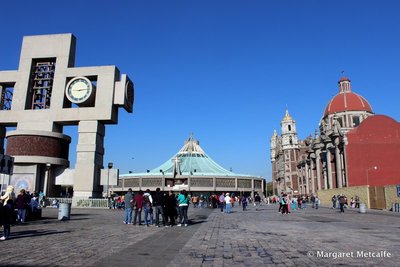 The complex comprises of the Old Basilica with the red and yellow domes which was begun in 1695. However, over the centuries, because Mexico City is built on a former lake bed, the church began to sink and become dangerous so a new bigger basilica was built next to it and the old one was closed in 1976. The New Basilica is a stunning green circular building designed by Mexican architect Pedro Ramirez Vazquez. It has no pillars inside, providing a spacious area for the crowds of pilgrims who come to venerate the image of the Virgen. After carrying out restoration work on the Old Basilica, it was re-opened in 2000 but still continues to lean visibly. In this part of the complex you can also see the Bell Tower which shows the different ways people measure time... clock, sundial, Aztec calendar, astronomical calendar etc. 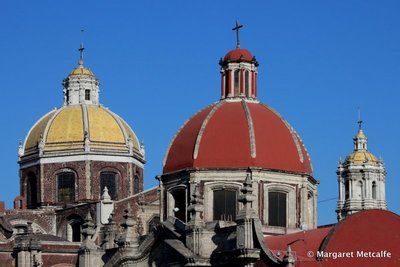 The distinct red and yellow domes of the Old Basilica 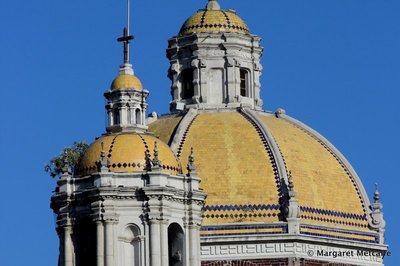 A close-up of the yellow domes 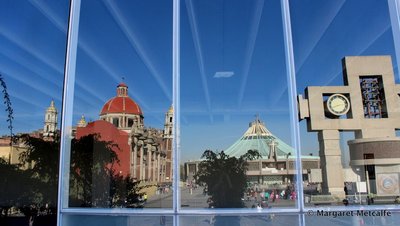 Reflection of both basilicas in the glass windows of the plaza 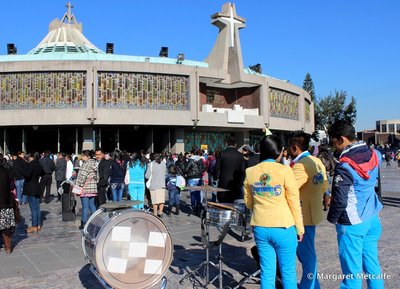 A band setting up their drums right outside the new Basilica 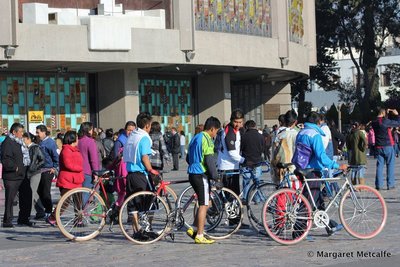 A group of cyclists arrive 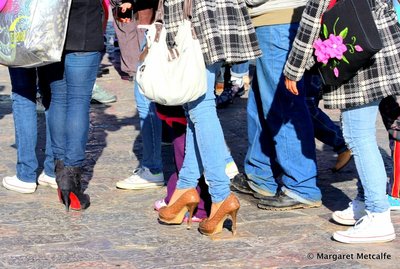 People from all walks of life come here.... seen in the wide variety of footwear!

I have often seen the Aztec Indian dancers doing their syncretic dances in honor of the Virgen, or maybe to the goddess Tonantzin, who was worshipped at this very same site before the Spaniards arrived, bringing their Catholic faith to Mexico. 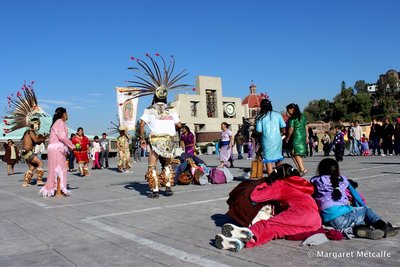 A group of dancers on the upper part of the plaza 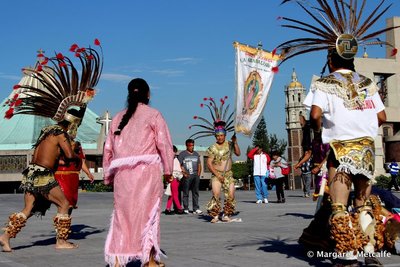 They typically wear feather headdresses, and seed pods around their ankles which shake as they move 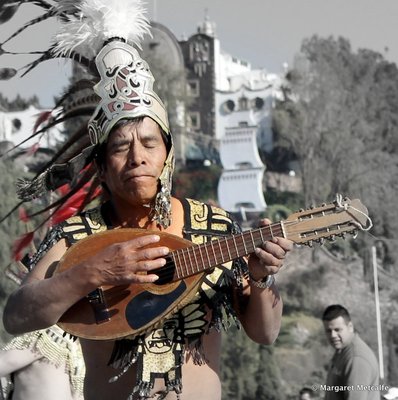 This time they were playing mandolin-type instruments

In contrast to them were the bands playing popular songs, some of them making enough noise to waken the whole city. They were moved from their very close position to the main temple where mass was being held and sent to the other end of the plaza. 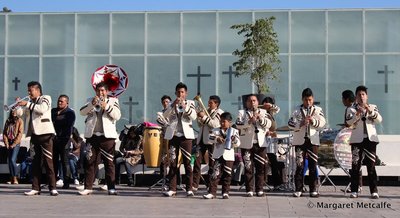 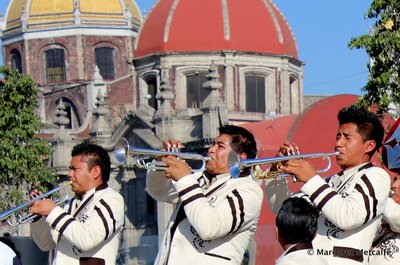 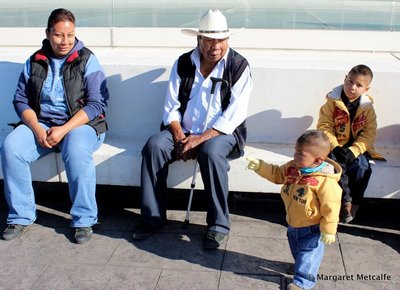 A small boy is fascinated by the musicians

On the other side of the plaza was a group from Hidalgo, dressed in mariachi hats and sequined capes, along with their band. One of the ladies informed me that they had come to fulfill a promise made to the Virgen. They had arrived that morning, would do their dance and attend mass and then return home about 200 kms away. 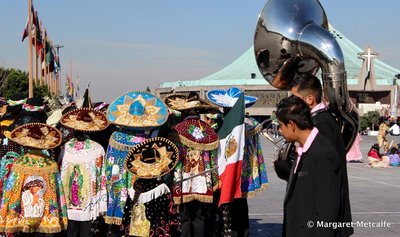 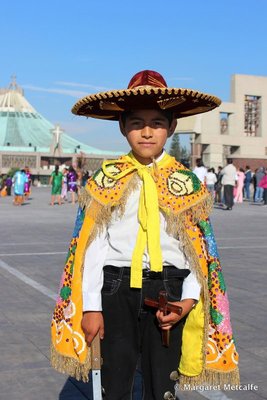 Nine-year old Miguel in his costume 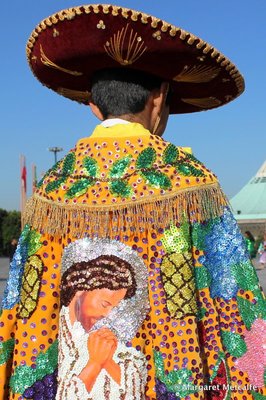 His cape was decorated with thousands of sequins 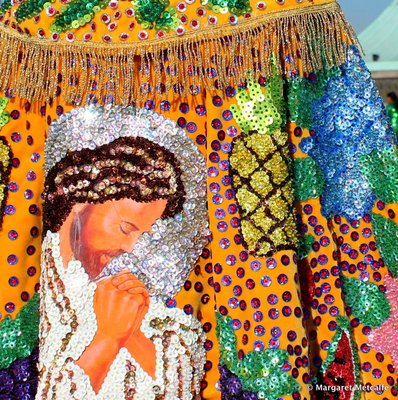 Design on the cape 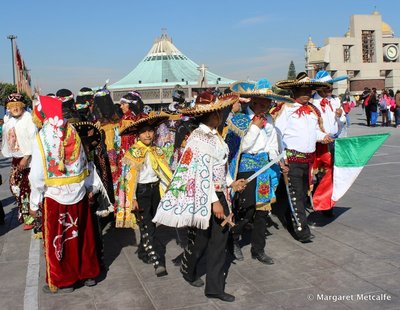 The group getting ready 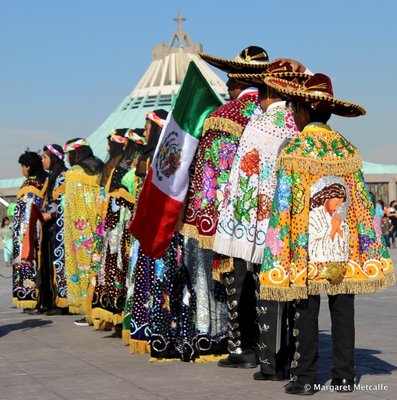 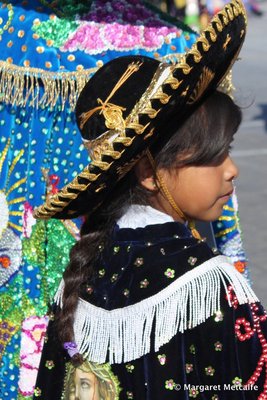 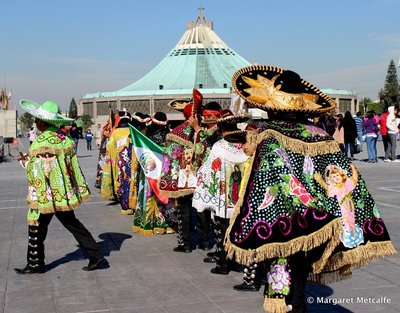 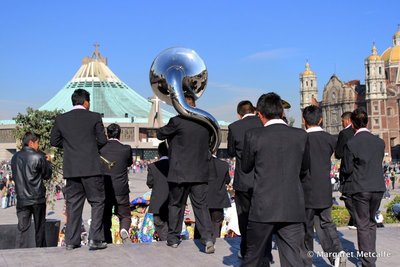 Off toward the New Basilica 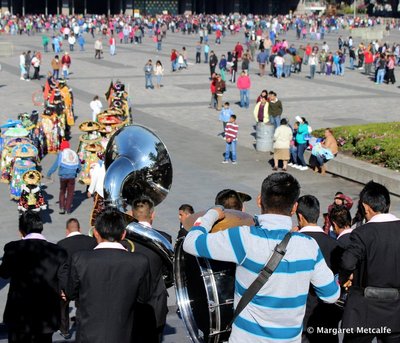 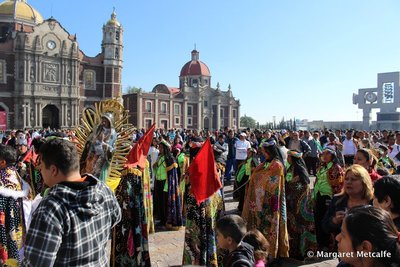 Crowds near the New Basilica

There was so much to see and hear, with many more bands and dancers, thatI didn't even move from the plaza. But time had run out for me so I jumped on my bike again and cycled back down to the centre. That's the advantage of getting up early on Sunday morning. You see things that you wouldn't even imagine in your dreams if you stayed in bed.