Mexico, through the car window 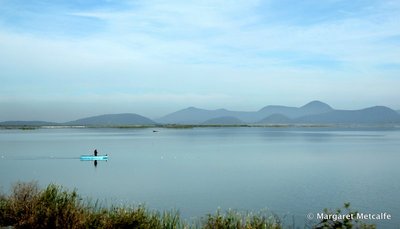 Michoacán isn't the safest state in Mexico to travel around which is a pity because it has so many interesting places to visit. Natural phenomena like the amazing migration of the Monarch butterflies which flock to its high-altitude forests in the winter, lakes full of migrating birds, colonial cities such as Morelia, the culture of the purépecha people, the fishermen of Lake Patzcúaro with their butterfly-nets, beautiful beaches along the Pacific coast, a church buried in lava at Paricutín whose belltowers protrude from the black rock... these are just some of its many interesting cultural and and natural sites.

To get to Jalisco, however, we had to drive across the state of Michoacán or take a much longer way around via Queretaro and Guanajuato, adding lots of time and kilometres to our journey. We decided that the motorway would probably be safe. It is also a well-maintained route and frequent military patrols can be seen. For those who think that outside of the big cities, all of Mexico travels on donkeys or horses or old battered cars on bumpy roads, they need to see the motorways. Some of them are excellent.

We left Mexico City early in the morning with a beautiful sunrise turning all the clouds pink at their base and climbed out of the Valle de México on the Mexico-Toluca motorway. This road snakes over the pine-clad mountains up to a height of about 3000 m (10,000 ft) and then drops down into the Toluca Valley. Temperatures were freezing and thick fog hung stubbornly over certain parts of the road. Mexico's fourth highest mountain, the volcano Nevado de Toluca (4680m/15,354 ft), looked down on us from a distance, standing out in the clear morning air. The roads were empty and the weather was crisp as we drove through the Estado de México and then into Michoacán. 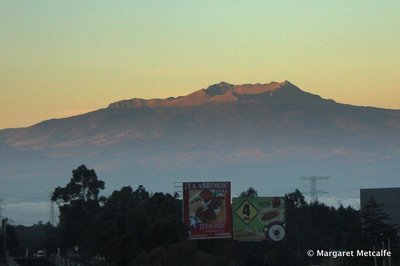 Low-lying mist in the Toluca Valley 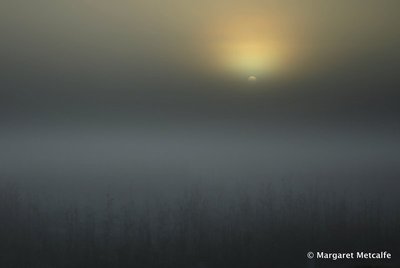 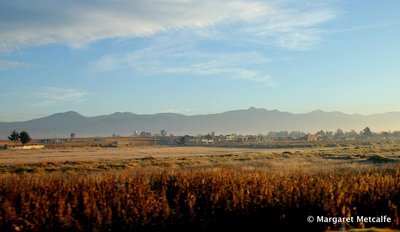 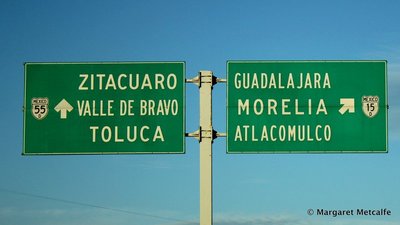 Heading in the direction of Morelia and Guadalajara 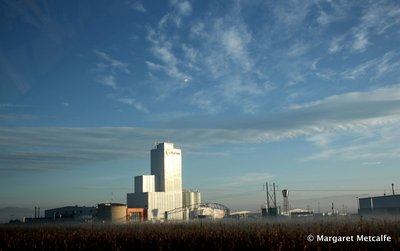 A factory along the way 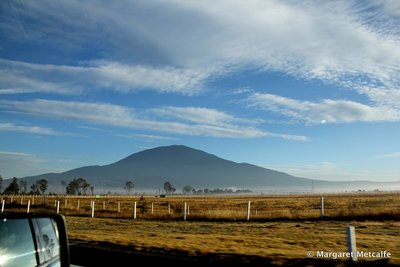 A bank of fog along the motorway 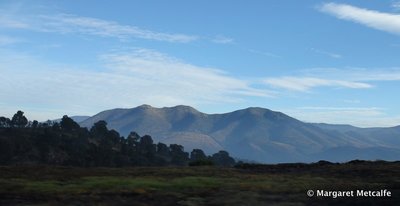 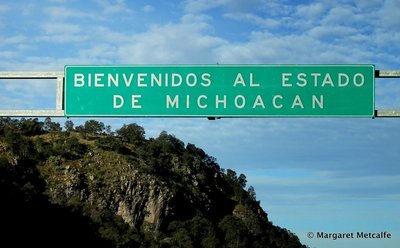 Crossing from the Estado de México into Michoacán

For once, we were glad to have a few cars as company... it's always best not to be completely unaccompanied along this stretch. At one point, we met a rather long convoy of military vehicles patrolling the motorway... on the other side. Then we spent a few hours driving, through areas of pine forests, open landscapes and shallow lakes. With my camera on its fast-shutter setting, I was able to freeze some of the scenes flashing past us. 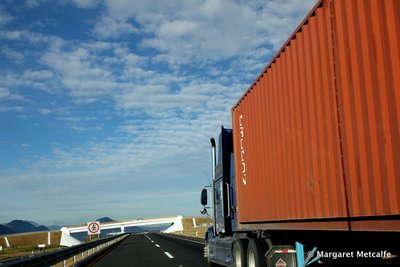 Passing one of the few trucks along the way 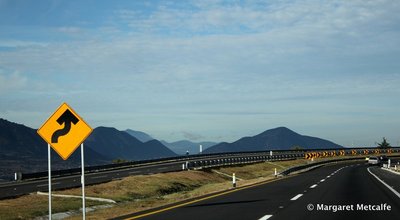 The well-maintained road was very empty 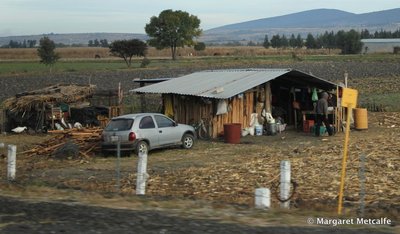 Small house along the side of the motorway 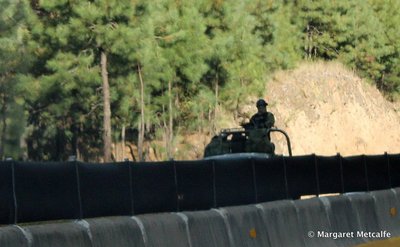 Part of the military convoy 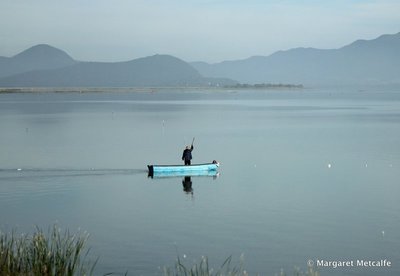 Fisherman in his boat out on the lake

Many migrating birds stop over at this lake. We saw egrets, herons and pelicans as we passed by 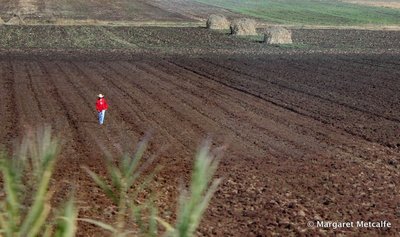 A farmer walking in his field 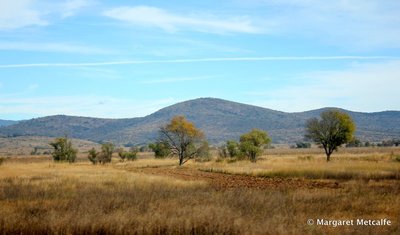 Rounded hills in the background

We left the motorway at Zamora, and proceeded to make our way to Mazamitla. This area is called Tierra Calliente, the Hot Country, nothing to do with the temperatures but because it is well-known for its violent clashes between rival drug cartels in Michoacán and Jalisco. We hoped we wouldn't have any nasty surprises as we drove along the smaller roads passing through the towns and countryside. Stopping for a sandwich along a lonely stretch of the road, we decided to remain inside the car... just in case. You never know. 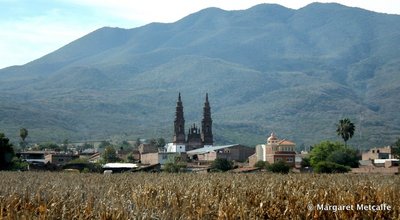 Pointed church spires at a small town near Zamora 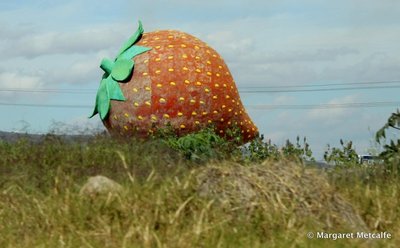 This is strawberry country! 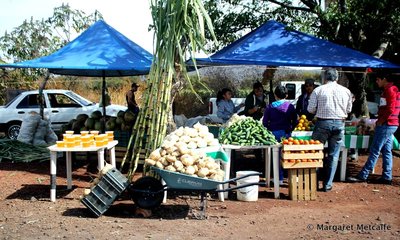 Horse waiting by the side of the road

We passed lots of cemeteries and wayside shrines where people had obviously had accidents... way too many! 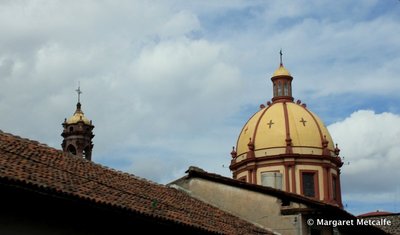 The church domes at Jiquilpan

Not long after, as we moved off again, we came round a corner and drove straight into a military roadblock. We had no warning, couldn't turn around and go back or anything. Obviously, that was the point of putting it there. My first thought was, "Oh no! I hope they really are the military and not just pretending to be."

A sour-faced soldier, with a weapon that looked liked it had seen service in Afghanistan, told us curtly to get out the car. He started searching everywhere, under the seats and car mats, fingering the trim all around the windows and checking behind the mirrors. Then he motioned to me to open our bags in the back. After rummaging around in one of them, his X-ray eyes obviously indicated to him that there was nothing of interest in any of the other bags. "Where are you going?" We told him we were on our way to Mazamitla. "Why?" To visit friends and spend Christmas there. We showed him our hotel reservation. He didn't look too convinced. Shame his X-ray eyes couldn't see right inside us and judge our intentions. He would have known immediately that we were telling the truth.

By this time, his supervisor had arrived, a much more amicable person. He began to inform Josep why they were searching us. "Have you been stopped by anyone? ¿Alguien ha intentado extorsionarles? Extorsion?" No, thankfully. He warned us not to travel in this area after 7 pm. "We don't have enough units to patrol and keep this region safe!" Oh well, at least he seemed to be on our side... Together they decided we were harmless and and that we didn't have any ulterior motives and let us go. We were definitely relieved to leave Tierra Caliente and arrive in the cool green mountains of Mazamitla.

That was the only unpleasant incident we suffered but when our friend urged us not to go back that way, we took her up on her suggestion. We returned to Mexico City via Guadalajara, joining the same motorway we had come along a few days earlier and crossed Michoacán safely. We didn't want to meet up with the military or the drug cartels or the self-defense groups so rife in that area. 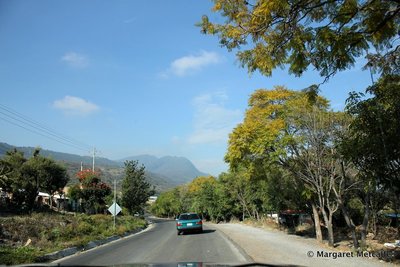 Driving from Mazamitla to Lake Chapala 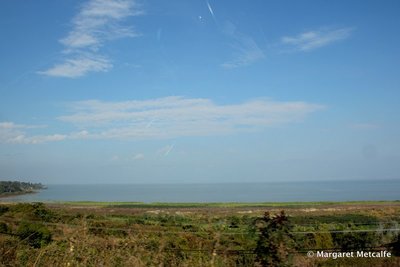 Lake Chapala is enormous, some 80 kms long and 18kms wide...we couldn't see the other side 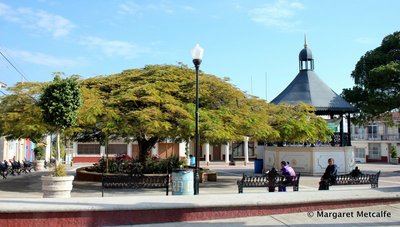 Town along the lakeside 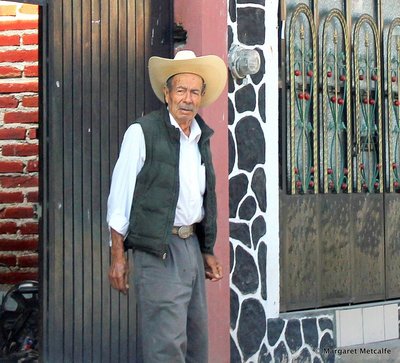 A local man along the road 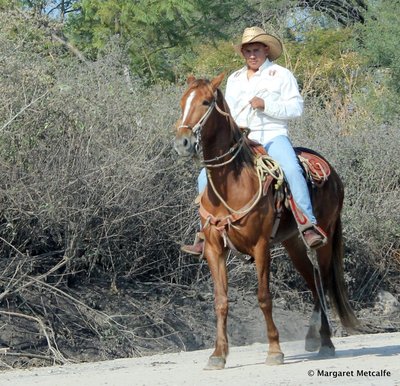 Jalisco is famous for its horse-riding tradition

Horses and pelicans near a lake 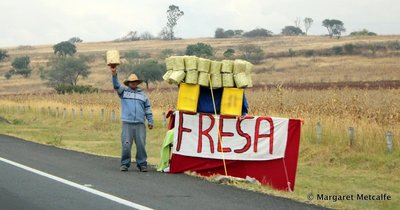 Back in Estado de México

Selling woolly jumpers along the side of the road 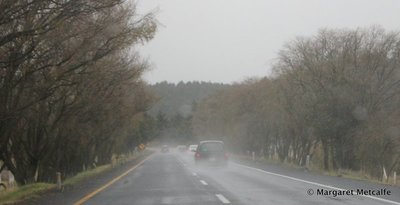 We hit a heavy rainstorm 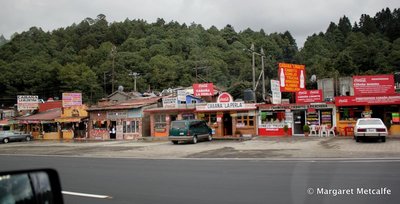 Places to eat along the motorway in La Marquesa

What we got instead was a journey through the four seasons, all in one day.