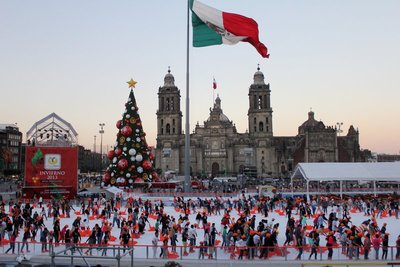 It's coming up to 6.30 pm and dusk has fallen on top of us like a soft blanket. The temperature has dropped several degrees and there's a persistent wind, waking up the huge flag from its usual limp slumber and throwing it into frenzied fits. I put on a long-sleeved shirt and then decide to wrap a thin scarf around my neck to protect me from the wind's clawing fingers. The man next to me is shivering in a T-shirt, wishing he'd anticipated the change of season in the last half hour. His small daughter is dressed from head to toes in pink, obviously her favourite color. At least she won't get lost. We're all waiting, and in the meantime, watching an army of ant-like figures frenetically skating in a vaguely anti-clockwise direction on the enormous ice-rink below. Skates, helmets and seal-shaped sleds to push kids on or hold onto with white knuckles are all a coordinated bright orange color.

I turn to the young couple on the other side of me. They are huddling up to one another, "A qué hora van a prender las luces?" I ask. I'm wondering what time they are going to switch the lights on. They're not sure. They thought it would be at 6 o'clock. Maybe at 6.30 pm. I'm hoping so. 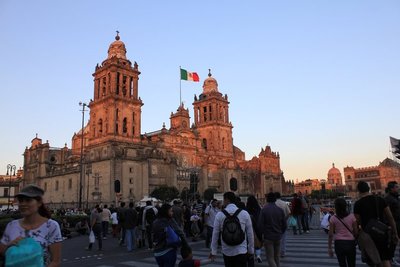 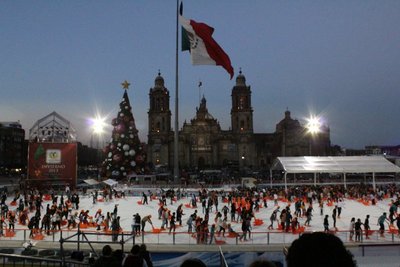 It all seems a bit surreal. Here I am in the middle of Mexico City, in the massive central square, the Zócalo, feeling decidely chilly looking down on the largest ice-rink in Latin America. And waiting for them to switch on the Christmas lights. Looming opposite me is the huge shadowy bulk of the Cathedral, silent and melancholic, slowly sinking down into the soft ground, vigilando la plaza under its stern gaze. I wonder if it approves of this year's winter wonderland spread at its feet. Probably. It certainly makes a change from the panorama of the last few months. For weeks on end, thousands of teachers from Oaxaca and other states took the large square hostage and camped here in a chaotic mess to protest against the government's education reforms. It had begun to look like a stubbornly permanent refugee camp, complete with streets and restaurant tents. You needed a map and large doses of determination to attempt a crossing of the plaza. The discontented teachers were finally evicted in mid-September to make way for the patriotic Independence Day celebrations and for a short while, the Zócalo was released from the clutches of its secuestradores. I have no idea if a ransom was paid or not.

After the Dia de la Independencia came the political meetings in protest at the energy reform billl, followed by the International Book Fair, the Science and Technology event, the Day of the Dead ... and so on. Now the twin towers of the Catedral Metropolitana are smiling down on families enjoying the Christmas atmosphere and holidaymakers sporting orange skates trying to stay upright on the ice. Meanwhile, tourists in Turibuses are coughed up into the square and left to reconcile the coexistence of Aztec temples, colonial cathedrals and modern-day technology responsible for bringing the frozen Arctic to Mexican latitudes. 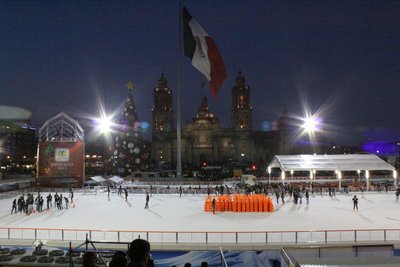 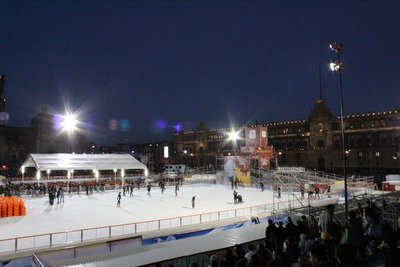 As we continue to wait, the ice-rink slowly empties and winds down for the day and night closes in on all sides. Then, all of a sudden, the enormous Christmas tree on the other side of the rink leaps into action. I'm impressed. It's exactly 6.30 pm. Where there was just a black outline seconds before, now the tree takes shape in the darkness with thousands of small twinkling lights coming to life. I can literally hear the plaza gasp. Two minutes later, the darkness is split by a burst of thousands more light bulbs illuminating the square. Cheers and waves of applause and murmurs of approval accompany the arrival of the Christmas lights. It was worth the chilly wait in the wind. 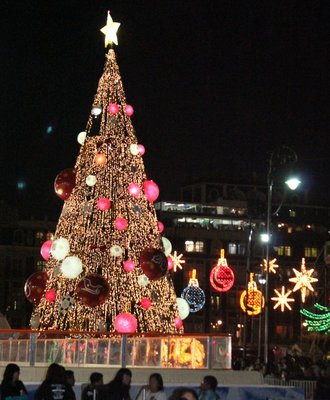 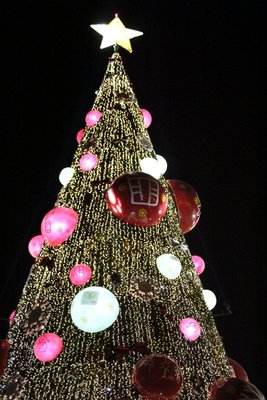 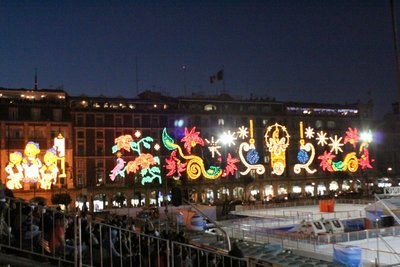 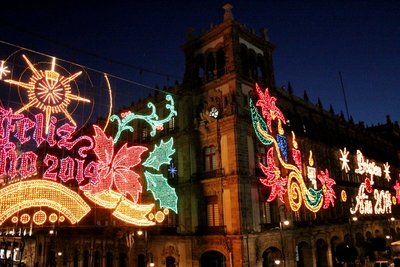 Sitting on the highest tier of the spectator seating, it feels like I can just stretch my hand out and touch the light bulbs behind me. For once, the Cathedral and the Palacio Nacional take a step back into the shadows and retreat into anonymity while the buildings on the other two sides of the square take on the leading role. They have waited all year, anxious to proclaim their Christmas greetings - Feliz Navidad and Próspero Año 2014 - to the inhabitants of Mexico City and visitors. Their vibrant colors and Christmas designs - poinsettias. candles, carol singers, stars and tree decorations - light up the city and set the mood for this season. 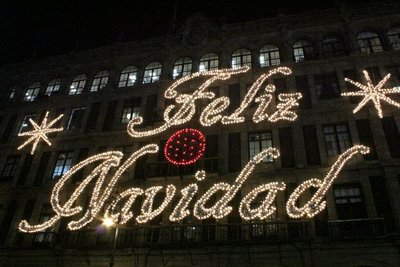 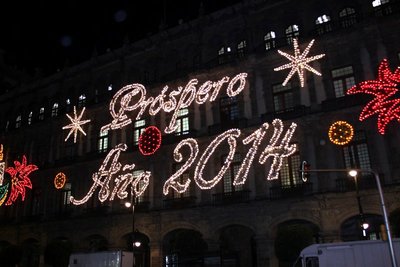 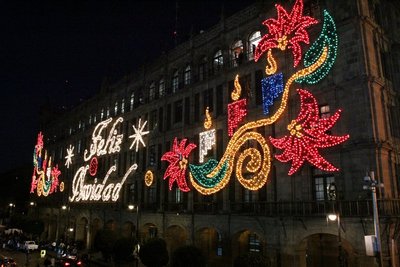 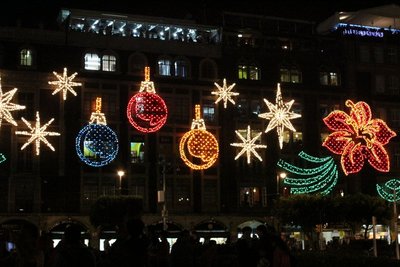 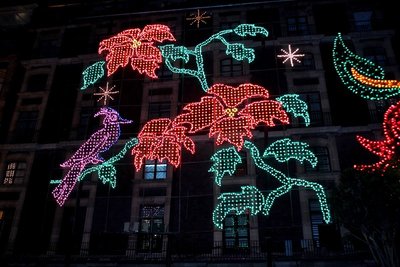 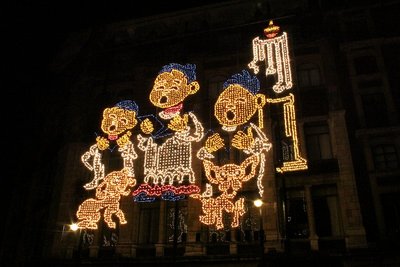 I wander around observing my fellow-visitors and then remember I'm supposed to pick Marc up from Polanco shortly. Time to move on. I join the slowly-flowing river of people as it makes its way down pedestrianised Madero Street. Earlier when I was heading in the opposite direction towards the Zócalo from the Palacio de Bellas Artes, the street was already brimming with shoppers and families. Inside the Casa de los Azulejos, a huge star-shaped piñata was strung up above the restaurant tables. I hoped it wouldn't accidentally drop into someone's quesadillas below. A bit further on, I stopped to listen to a band of troubadours, who looked like they had been transported in a time machine straight from Medieval Germany. Elsewhere, a group of young children dressed in red wooly jumpers were singing Los peces en el rio (the Fish in the River) under the banner of the Salvation Army. 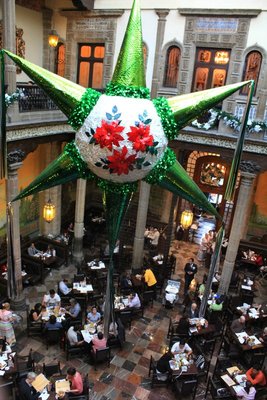 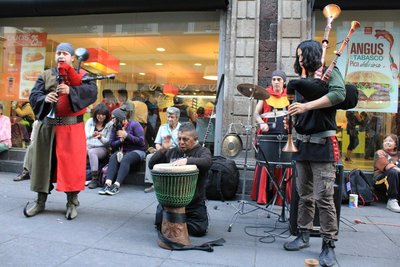 Now, feeling just like fish swimming in the river, we are carried downstream towards the Torre Latino, expanding like a viscous mass of humanity to occupy all the available space between the buildings on either side. Suddenly, we're surprised by the sound of ringing bells and children's voices singing Christmas carols and are treated to the sight of an unexpected snowfall. All along the street, flurries of skinny white flakes start floating in the air, before being energetically whisked off by the wind, much to the delight of toddlers, youngsters and adults alike. As if in response to a previously-planned choreography, scores of iPhones and smartphones are whipped out of pockets to record the fleeting event and provide proof to non-believers. It doesn't matter that it's not the authentic frozen stuff. Mexicans in DF rarely have the chance to see real nieve so even a clear imposter of the white stuff is welcome. A small boy wearing a red cap claps his hands enthusiastically, trying to catch some flakes, balanced on his father's shoulders, who appears to be as ecstatic as his son is. Yes, it definitely feels like Christmas here in the Centro Histórico and I'm caught up in the festive mood too. 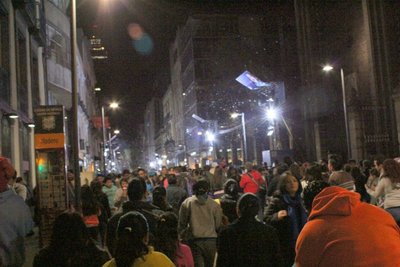 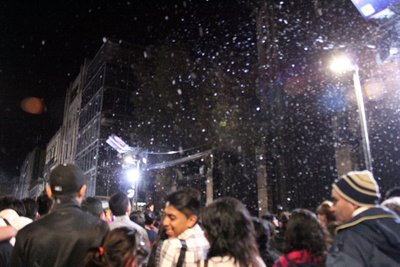 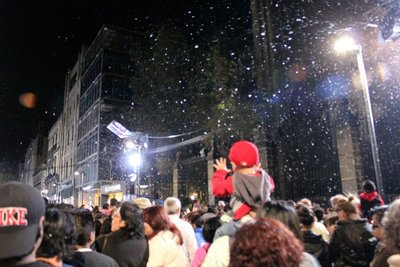 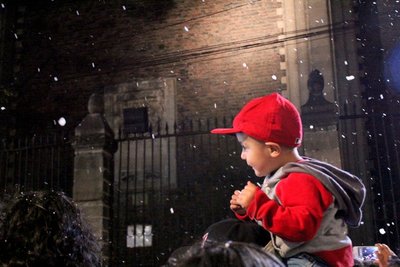 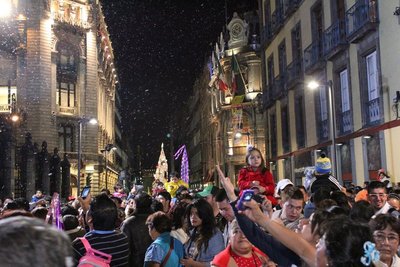 My phone begins buzzing in my pocket. Message from Marc: "Mum, pls meet me at Antara half an hour." Well, that will need to be a flexible Mexican 30 minutes if I'm going to get there in time. At the bottom of the Torre Latino, a tidal wave of pedestrians is heaped up, waiting for the green light to cross the main road. As the cars screech to a halt and a small traffic policeman in his fluorescent vest starts his symphony of whistle-blowing and hand-waving, the wave surges forward and rushes across, breaking on the shore at the other side. I extricate myself from it and hurry down into the bowels of the car park under Bellas Artes. Quick, I must get to Polanco. 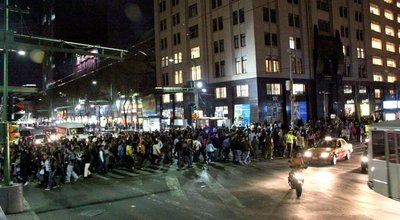 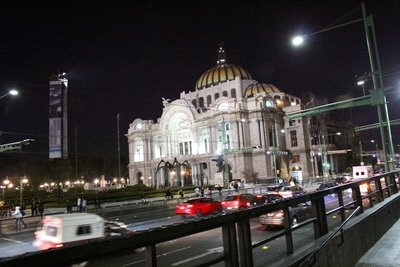 I spend 11 minutes just trying to get out of the car park. This is the other side of Christmas in Mexico City. The traffic is worse than usual. My phone buzzes again. "Mum, traffic terrible. Will walk to school. Meet me there." Phew! That will probably cut off an extra 45 minutes trapped in a solidified line of cars. I settle down to another long wait and pick up my camera to look through my photos. They will keep me in the Christmas spirit for a bit longer as the neighbouring vehicles slowly wrap themselves around me in a python's strangle. Happy Christmas! 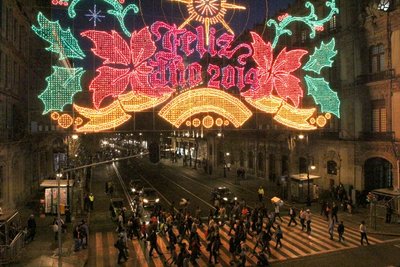