Millions of pilgrims on my doorstep 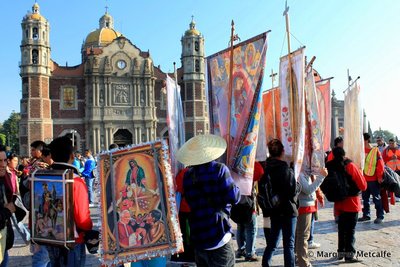 Ask any Mexican about the 12th December and they will tell you about one of the most important celebrations in the Mexican calendar... the Feast Day of the Virgen de Guadalupe. Ask any person who lives in DF about the same date and they will almost certainly also mention the traffic, noise, pilgrims and firecrackers. This week is when Mexico City, already bursting at its seams with over 25 million inhabitants, has to take on an almost supernatural elasticity to make room for an additional human mass of hundreds of thousands of pilgrims who have come to the Basilica de Guadalupe, the second most visited Catholic shrine in the world after the Vatican. The only difference is that here they all descend at this site during the same week. 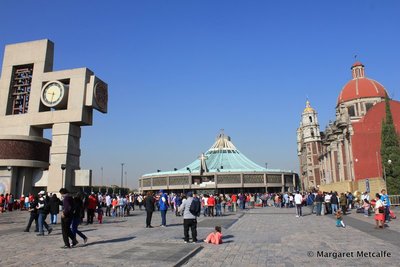 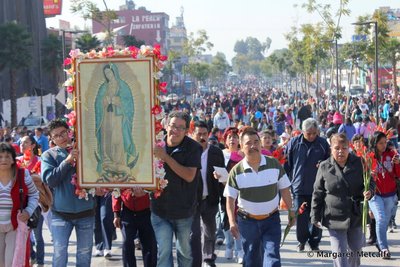 Today is the culmination of a journey for pilgrims from all over Mexico who have arrived to venerate the Virgen de Guadalupe on her special day, 482 years after she appeared to Juan Diego on this small hillside, the Cerro del Tepeyac. Many have come in buses, trucks and pick-ups from Veracruz, Puebla, Tlaxacala and ever further afield. Some have cycled or walked with images of the Virgen tied to their backs or carrying their statues. Even more incredible are those who have come painfully on their knees. All of them, however, come with their faith in her intact, ready to thank her for the blessings and miracles she has bestowed on them over the past year. 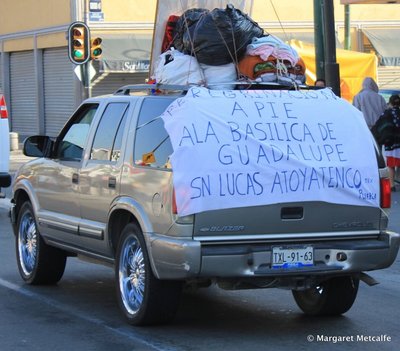 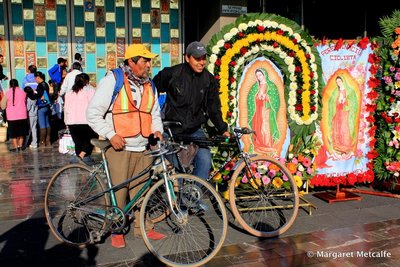 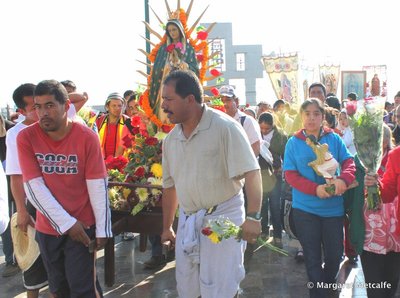 The newspapers and TV are full of images and report that up to 6 million peregrinos are expected to have paid a visit this week, a huge gathering which stretches the services of Mexico City well beyond their already-frayed limit. With the crowds have come 1600 tons of rubbish which have been scooped up this week and an incalculable number of dogs who came along for the journey and have been abandoned to their fate. Fortunately no children have come unstuck from their parents so far. A kilometer-thick belt around the Basilica has been invaded by los fieles and I have no idea how the small stalls are providing enough food and drink for them all. 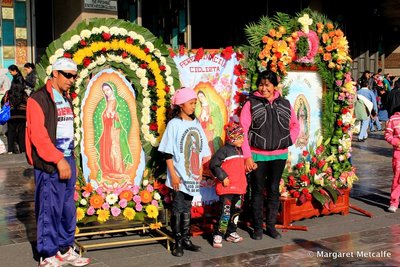 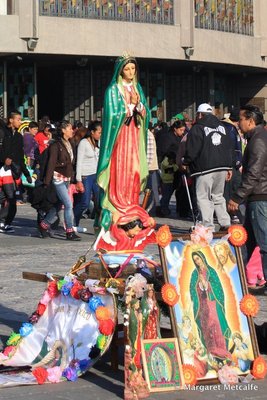 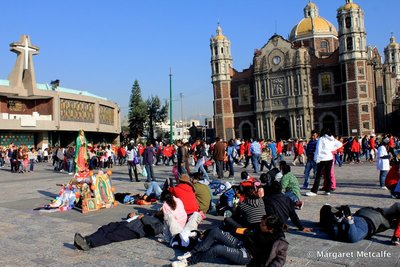 When I cycled up to the Basilica very early on Sunday morning, early-comers had already taken up residence. Whole families dressed in blankets were warming up their hands on steaming beverages in white polystyrene cups and munching tacos and molletes to give them fuel for the day. Small children had disappeared under thick layers of wooly hats, gloves, scarves and jumpers. I knew they were there somewhere because I could see their breath emerging in white wisps which drifted off in the cool crisp air. Groups of people all wearing the same color track suits were sitting on the steps or gathering around their community image or bandera, stomping their feet and conversing. Still others were decked in the typical dress of their pueblos, ready to sing and dance to the Virgen and anyone else standing around. The atmosphere was akin to that of a village fête or family outing, only on a gigantic scale, a sort of mega-city family fiesta. Thankfully, the weather accompanied the occasion and very soon, the winter woolies would be ditched as temperatures climbed dizzily from 4 or 5 degrees Celsius to the mid-twenties. 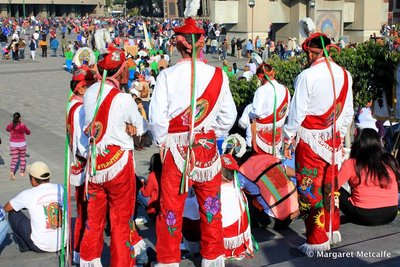 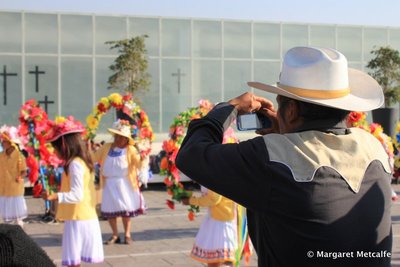 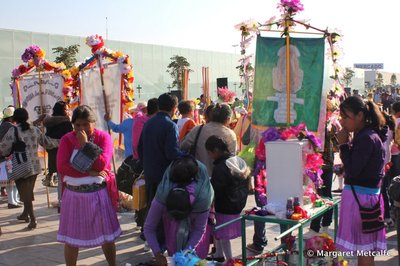 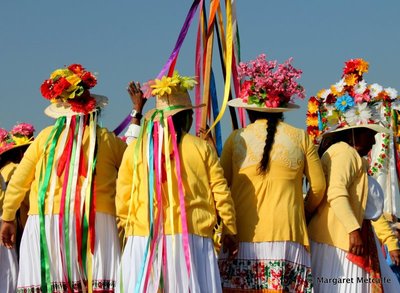 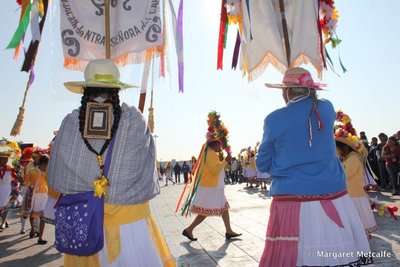 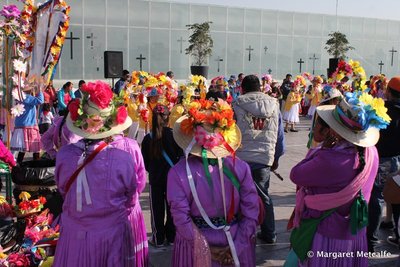 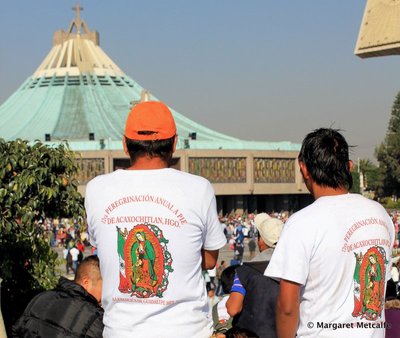 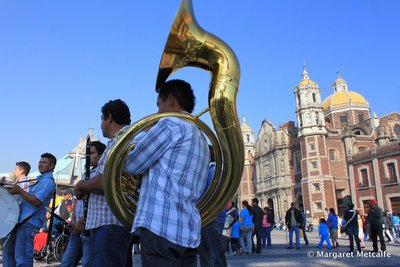 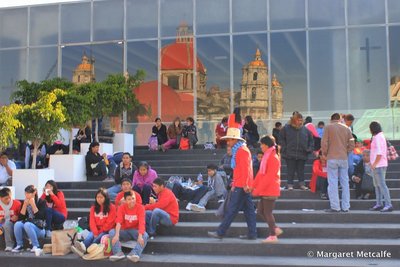 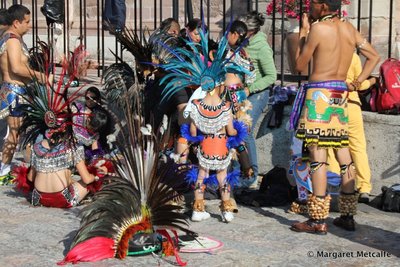 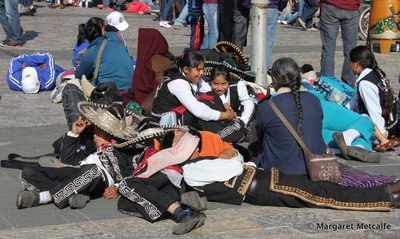 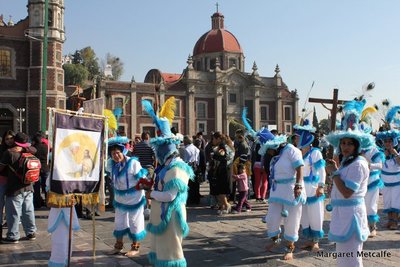 Last night, on the eve of the festival, a constant hum of music and noise filled the background space in my head as thousands of people made their way down Reforma in the dark, ready to arrive at the Basilica on time. Unexpectedly, I was shaken out of my noise-filled dream in the middle of the night by a call. Not surprisingly, there was an even greater cacophony going on in the background of the pilgrim's conversation who had mistakenly dialled my number. Morning light didn't bring the usual melodious birds' chorus but instead a never-ending queue of firecrackers going off all over the city. They are still making holes in the sky every few minutes.

At least the roads were fairly clear this morning when we left for school at 7 am. Tonight will be a different story though as thousands of pilgrims begin their journey home after another year's trip to the Basilica. I'm definitely staying at home this evening. 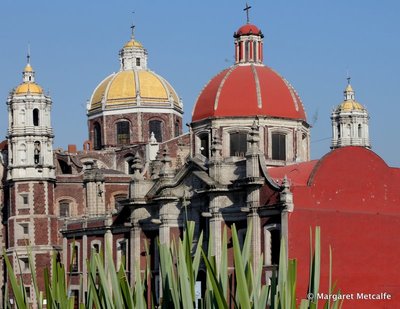 Wow. Very interesting article. Thanks for Sharing. I have been to Mexico and DF for many years but somehow never knew of this event.
Is it really 6 million people in one week? Wow. Do you have any pictures of the mass crowds?