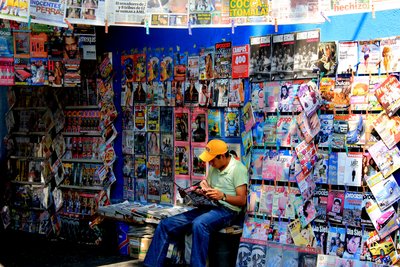 Reading the press at a street kiosk 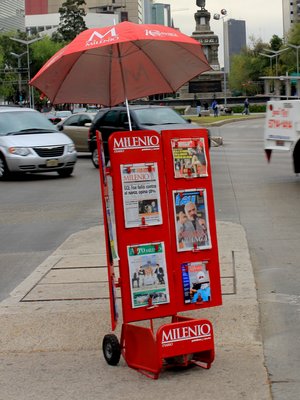 You can read the headlines from the car

The newspapers here in Mexico do not make for light-hearted reading. In fact, they can turn your stomach before or after eating your breakfast of huevos revueltos (scrambled egg). Day-to-day occurrences here in this country would most likely send other nations reeling with shock and spark off public outcries, major investigations or even days of luto nacional, national mourning. Not so here. It's news for a few days, until the next shooting, massacre, kidnapping or case of corruption occurs. Even avoiding the most grisly and gruesome stories and tabloids, I am still left gasping by what I read. Yesterday's leading article made my stomach heave. 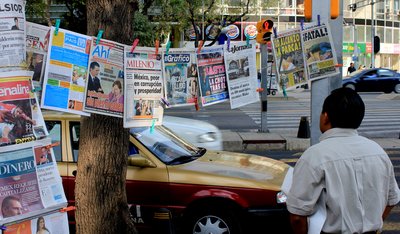 Checking out the newspaper headlines

When they opened up the back doors of the two trailers, they found a cargo of 513 people, including 32 women and 4 youngsters. Tied up, gasping for air, for a drink... weak and fainting in the heat. They came from Central America and countries as far away as Japan, China, India and Nepal. Sin papeles, indocumentados, illegal immigrants... people searching for a better life than their own communities offer them.

The trucks had crossed from Guatemala into Mexico on 18th May. Special X-ray equipment, in use since the beginning of this year, detected the presence of human beings in the back. Hundreds of them. 240 in one truck and 273 in the other.

Desperate humans, who pay $7000 (€5000) to achieve their version of the American Dream. For those who had come from Asia, it had probably taken them a year to get this far. Unfortunately, it had turned into a nightmare. Yet they were very fortunate. They were liberated and the human traffickers were arrested. Many illegal immigrants never reach the United States, their longed-for destination. They disappear somewhere along the route as they pass through Mexico. Exploited, abused, kidnapped, killed, they are defenceless against criminal organisations which prey on their vulnerability and revel in impunidad. Mexico has become a land of mass graves for many, and for others, utter misery and terror lie ahead in their journey.

Meanwhile, back home, their families are left wondering why they never hear from them again and what happened.

Many ordinary, hard-working Mexicans have tried their luck in crossing the border. The gardeners who came to revive our garden, after 7 rain-less months had killed off most of the greenery, told me that in the past, when there was no work in Mexico, they would risk the consequences and sneak across the border into the United States as illegal immigrants to work there. But the journey has become so risky and dangerous now that they stopped doing that a couple of years ago. Friends of theirs have disappeared and they've never heard any more from them. "No vale la pena!", they said. "It's not worth it!"