Reeling from an earthquake 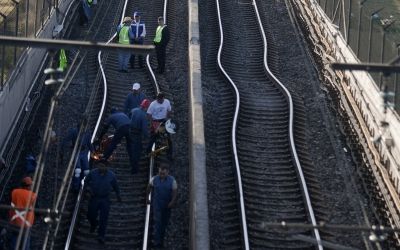 That's the thing about earthquakes. You can't predict them or really get ready for them. You wake up in the morning and it never crosses your mind that there might be a strong earth tremor a bit later on. It just happens and takes you by surprise.

And that's what happened on Tuesday, 20th March, at mid-day, 12:02 to be exact. I was up in Santa Fe shopping, pushing the trolley down the aisle to get some cartons of milk and juice when, all of a sudden, some small cartons started jumping off the shelf and landing on the floor. The man just in front of me leapt out of the way a bit taken aback and then I saw the entire fully-stacked shelf moving. "Those shelf-stackers on the other side are getting a bit rough!" was my first thought. You see, I'm not really an expert at earthquake detection and therefore the idea that it could have been a terremoto didn't make the top 10 probable causes for kamikaze juice cartons, at least not at that moment. But then I noticed that the shelves were shaking more violently, not just back and forth, but a bit like a wave. People started looking up and pointing to the lights overhead which were swinging crazily and by now the ground was shaking noticeably. I felt a bit queasy and dizzy.

A voice was calling us to evacuate the building in an orderly fashion and I have to say that I was impressed. No-one was screaming or running. We all left our shopping trolleys half- or quarter-full right where they were and made our way out outside. Most of the customers and staff were trying to use their phones but of course the lines were down. I didn't even try. My cell phone had run out of tiempo aire, as they say here, and I was waiting to get to the cash desk to top it up. Messages started popping up on my cell phone three hours later. "Did you feel it?" "Are you OK?" By then, it was all over. 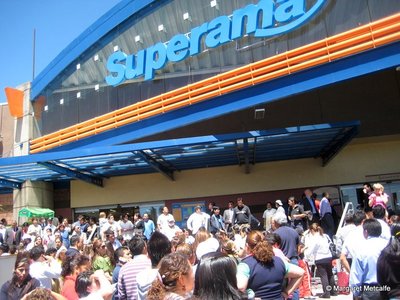 People evacuated from the supermarket in Santa Fe

Later, when we were informed that we could go back inside, I decided that if there were any replicas, they probably wouldn't be as strong as the main one so I was probably safe. Others obviously didn't think the same. I saw quite a few shopping trolleys marooned in the middle of the supermercado, abandoned to their fate. With my shopping done, I went down to my car. Finding yourself in the bowels of a building in semi-darkness, underneath tons of shelving and products and customers which could crush the breath out of you in an instant, is not a particularly pleasant experience when you've just been shaken up by a temblor. The lady parked by me had her escape plan all worked out. Her trolley literally flew down between the parked cars, she emptied the food into the car boot with a speed reserved only for someone whose life depended on it, and screeched off up the ramp into the distance in search of a safer location.

It took me one hour to get home which gave me plenty of time to hear the news on the radio. There had been a strong earthquake, 7.4 in magnitude, sending shockwaves over most of southern Mexico. By yesterday afternoon, 56 replicas registering magnitudes of between 4 and 5.3 had been felt. And amazingly, Mexico City had survived with surprisingly little damage and no lives lost. It was the strongest terremoto since the tragic one in 1985 (see my blog post "The earth quakes in Mexico City" of 12 December 2011) which is still uppermost in many people's minds when the ground beneath them begins to shake. Along with thousands of other people, I was stuck in my car in a massive traffic jam, watching how skyscrapers and office blocks had coughed out hundreds of people onto the pavements and streets outside. An hour later, some buildings remained empty as the aftershocks continued. No-one wants to be trapped on the 13th floor in such circumstances. 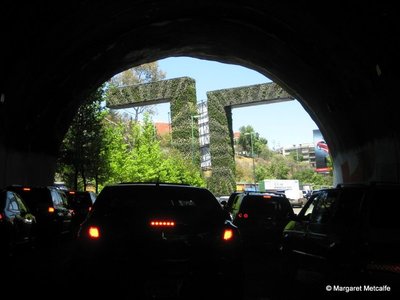 Stuck in the traffic jam inside the tunnel 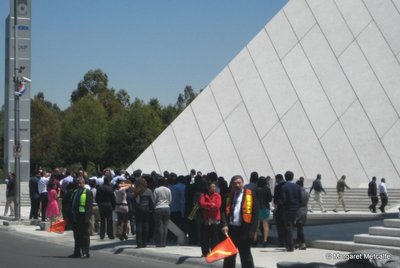 People standing outside the buildings in Santa Fe 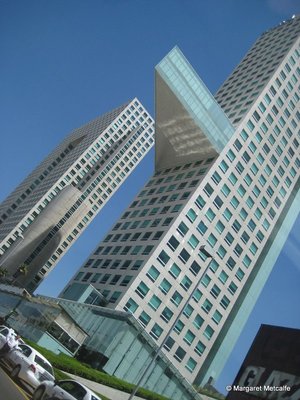 A couple of the tall buildings which resisted the earthquake well 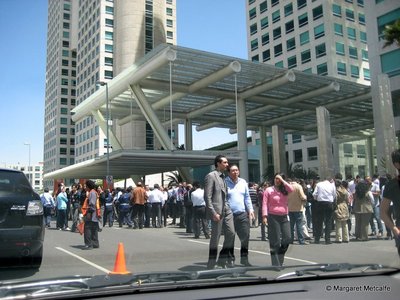 Workers outside the offices

The end balance was that Mexico City got off lightly. The city has definitely learned from the tragedy in 1985. New buildings may sway a lot but are now built to withstand shocks of up to almost 9 on the Richter scale and the population regularly has simulacros to remind them of what to do in the event of a quake. However, in the states of Guerrero (where the epicentre was located) and Oaxaca over 30,000 houses were damaged and the people are still reeling from the sismo which took them by surprise on Tuesday. 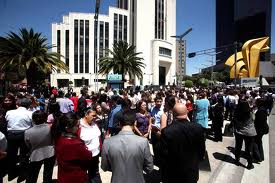 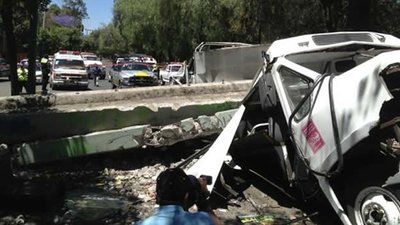 A microbus was flattened by a concrete bridge. Fortunately it was empty except for the driver who was slightly injured. 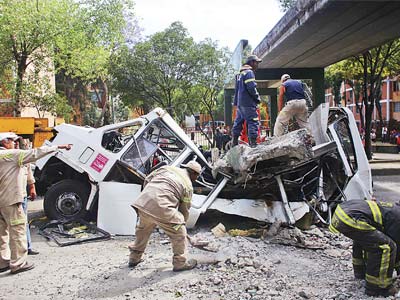 Side view of the microbus 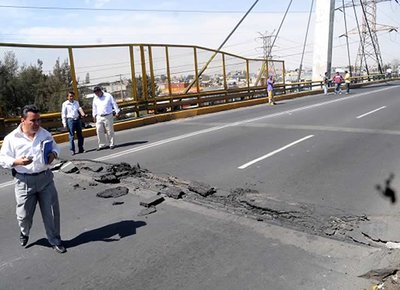 Damage to a bridge 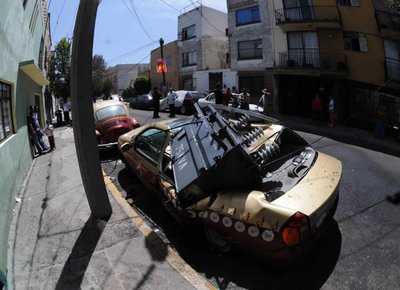 A transformer crushes a taxi 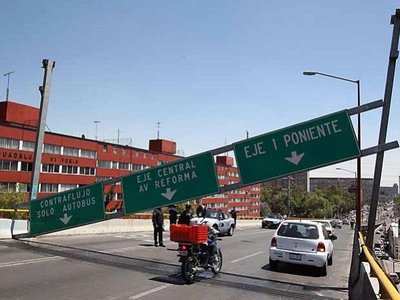 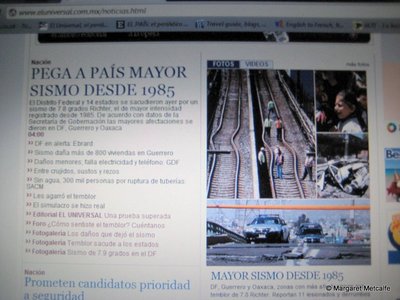 The headlines on Wednesday 21st March 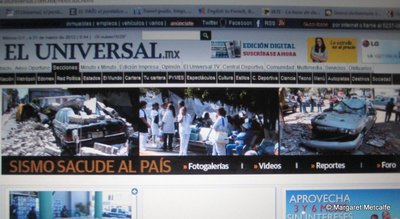 The following photos taken from the newspaper show some of the damage in the state of Guerrero, S. Mexico 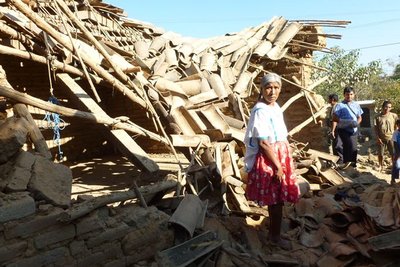 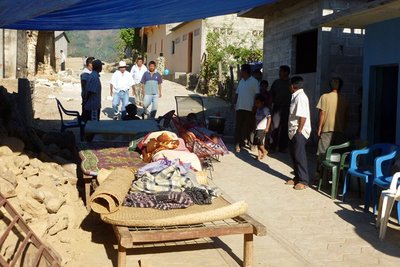 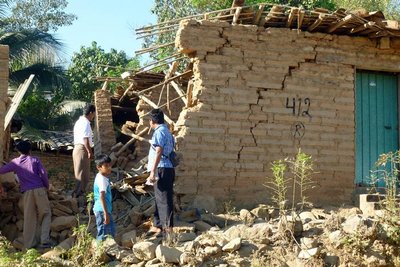 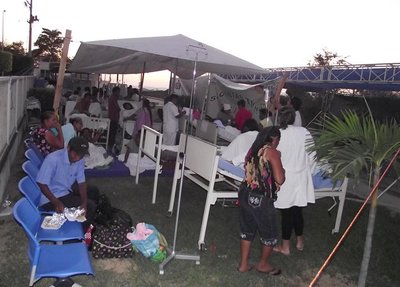 Long and strong! But with better building code (the number of skyscrapers built since 85 is amazing .... Santa Fe didn't exist as a neighborhood back then), lots of evacuation practices under the belt, a stronger government leadership .... we passed the test! Obama should be hysterical about his daughter being in Oaxaca (closer to the epicenter!) on vacation ... and here we are worried about narcos!

Haha! You're right! But I can imagine why people still get panicky if they lived through the 1985 one.

Hundreds of people died in '85! We'll never know how many. The damage was devistating - there are lots of parks where there were once buildings ---- Insurgentes and Reforma (where the old Intercontinental Hotel stood), next to the Alameda Park (the Regis Hotel), Tlatelolco, etc. People either relived their previous experience, or are afraid the next one will be worse! Mexico City Mayor Ebrard was on TV 10 minutes after the first quake --- 26 years ago President de la Madrid rejected international help when people were buried under rubble - by the time he renigged it was too late and too many people lost their lives unnecessarily. Building codes is significantly better - there were only 5 hydraulic cranes in the city back then - imagine - they now dot the horizon everywhere! Plus, Tuesday's quake was not as potent as the one in '85! Plus now we have cel phones, twitter, internet and extensive cable nets. Thank heavens!

Were you here in DF in 1985? It must have been scary, especially not getting the help that was needed in such an emergency. I hear it was the people of DF who did a lot of rescue work.