It's a dog's life

I don't know who has counted them but they say that there are 3 million stray dogs roaming the streets of Mexico City. We've seen lots of them, packs of wild dogs in the park or skinny bony creatures searching for food scraps along the streets, tails slumped between their legs. With a bit of imagination, you can picture some of them, after a few weeks' of feeding and a couple of shampoo sessions, curling up happily on the floor of a dog-lover's home. Like Ozzy.

About 6 months after arriving in Mexico, we finally decided to give in to Cristina's lifelong wish to have a dog. Ever since she could make herself understood, she's wanted a dog. So we took the plunge. But she was adamant.. he had to be a "rescued" dog, we had to save a life. So off went to the perrera in Polanco and adopted a folorn-looking black dog. That's how Ozzy came to join our family. Now I look at the stray dogs on the streets differently and imagine them to be Ozzy. 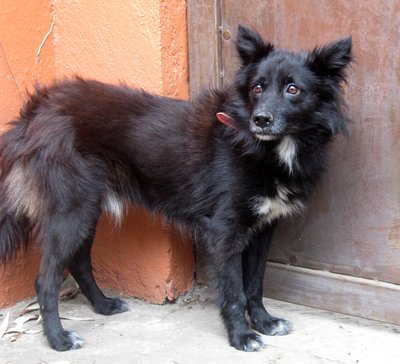 Ozzy when he first arrived

He was somewhat on the thin side, recovering from an injured foot and had sad eyes. But he soon settled down in his new home and blossomed into a happy, energetic dog. At home, he was obedient and eager to learn. He just had two slight defects whenever we took him out:

1. Anything remotely resembling a member of his own species or a squirrel sent him into exaggerated displays of "Don't mess with me!" behaviour and ear-splitting barks.

2. The moment we set foot out of the house, he was so ecstatic with excitement that he usually forgot we were at the other end of the leash. When he dashed off to explore and sniff every single lamp-post, tree or wall in sight, as if it were some kind of timed competition, you could vaguely make out the silhouette of a person behind him being swung around wildly and dragged furiously through the park or neighbourhood. This was visually very embarrassing for us.

We were at a loss as to how to correct Ozzy's anti-social behaviour and teach him some good manners, like walking WITH us, but one day, very unexpectedly, we came across the solution.

It all came about one very dark morning as we walked with Ozzy to catch the school bus. Out of the blue, or maybe I should say out of the black, and unbeknown to us, a large black and white monster silently bounded up behind us. Thanks to his exceptional psychic powers, Ozzy detected this intruder at the last moment and went off into fits of doggy histeria. Scared to death by this outburst, we were sent running for our lives down the street and hyperventilating for a good 35 minutes after. It turned out to be Lucas, the gigantic gangly Great Dane who lived down our street.

His owner came to apologise later that day and explained about Lucas' weekly outings to a Doggie School. Believe it or not, a few days later, Ozzy was being loaded (admittedly, not too willingly the first few days) into a small cage in the back of a pick-up, surrounded by about 10 other mutts. Three times a week, the boys would turn up at our house at 7 am and collect Ozzy, take him to Parque México in La Condesa, train and socialise him and bring him back at 4 or 5 pm. 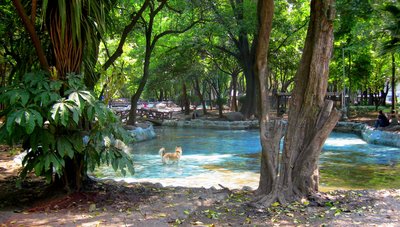 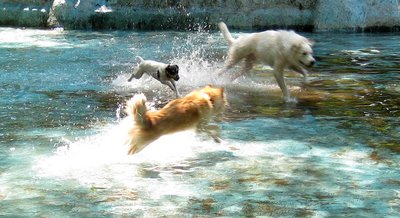 Doggy fun, splashing in the water

One Thursday morning, Cristina and I went to visit this park, beautiful and leafy, with a small lake, pools, bridges, pathways... a dog's paradise! Local residents were walking their dogs, and scores more were off their leash bouncing around together, splashing through the water and playing hide-and-seek. At one place, there were dozens of dogs, every breed, size, colour, shape and temperament represented, sitting or lying along the path. This was Ozzy's school! And there he was, obediently stretched out among them and not a whimper! He heard us talking even before we got close, his ears raised and a quizzical expression on his face. The trainers put Ozzy through his paces and showed us how to get him to sit, get up, walk next to us and a load more things. Maybe this would be the end to those embarrassing outings? 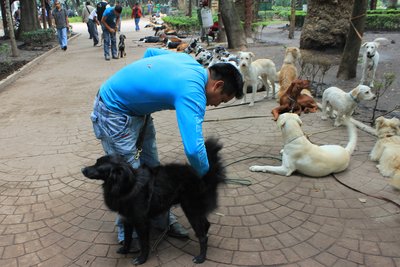 Ozzy and his trainer 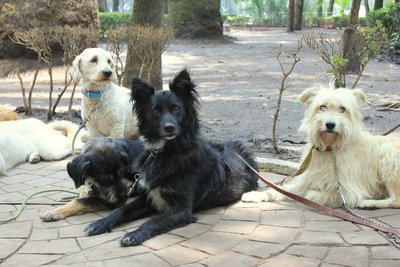 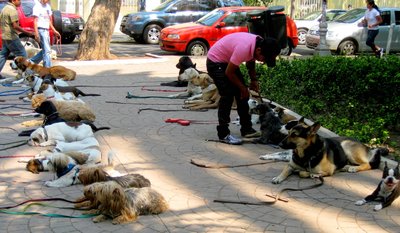 Dogs of all breeds 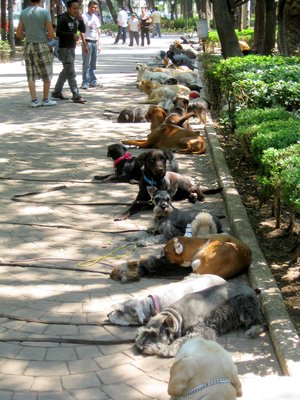 Sitting quietly side by side 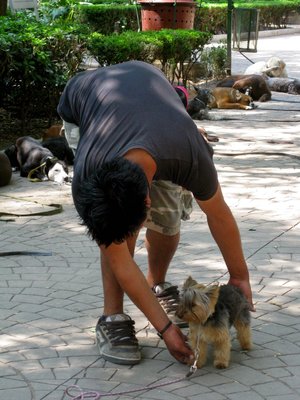 A small terrier is put through his paces 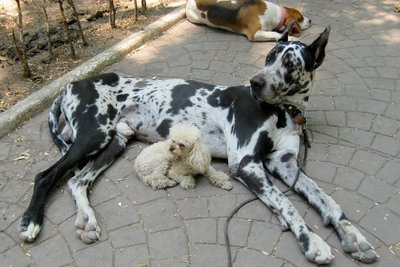 "Little and large".. Lucas and a tiny friend 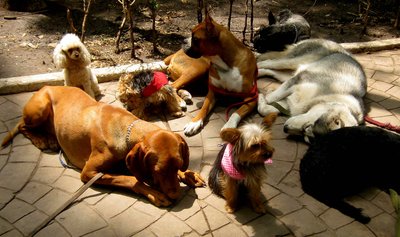 Sure, Ozzy's much better, and he still goes once a week to be with his "mates". What's more, whenever we're out of the city for more than one day or away on holiday, he goes to stay with his trainers, happy as a dog can be. It's a dog's life!