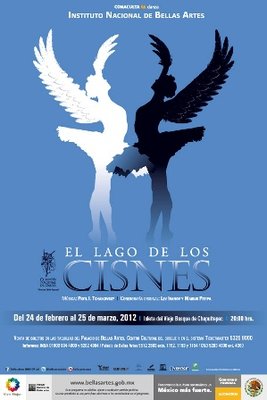 It's dark except for the spotlights giving you enough light to climb right up to the top of the temporary tiered seating. You find your seat number and sit down, on your jacket as it's getting a bit chilly and the plastic seat is cold. The breeze ruffles your hair and rustles the leaves in the tree just next to you. The people around you are chatting, in subdued tones. No-one's shouting except the candyfloss seller below with his generator throbbing in the night. To the left, on the top of the hill, you can make out the castle lit up over the top of the trees. A plane flies over, and suddenly you see its lights reflected in the lake below at your feet.

First Call... "Ladies and gentlemen, the function will be starting soon, please find your seats." I wonder if it'll really start at 8 pm or if like most things here it will be more like 8.30 pm.

Second Call.... "No photos or video of the performance, please". Oh, that's a shame! (I was obedient though, hence no photos of mine in this post).

And then on the dot of 8 o'clock, the Third Call is issued, the lights are turned off and we're plunged into darkness. A sudden hush falls over the spectators and the expectation is almost physically palpable as everyone wonders what will happen next.

Suddenly, on the far side of the lake, dark and invisible until now, the lights go on and a knight on a horse clip-clops his way along the side of the lake in front of the trees. He is joined by another rider and they gallop off into the darkness. A deep velvety voice slices through the night and Swan Lake is underway. Now the lights come on to the near left and a glittering palace appears, with red carpets. Tchaikovsky's well-known orchestral music draws a troupe of dancers from out of the darkness, dressed in their finery for a royal ball, and soon the ballet dancers are leaping and dancing under the coloured lights. The lake, bright green by day but black by night, mirrors the colours and movements, as we watch their elegant steps and twirls reflected in the water. It's magical. 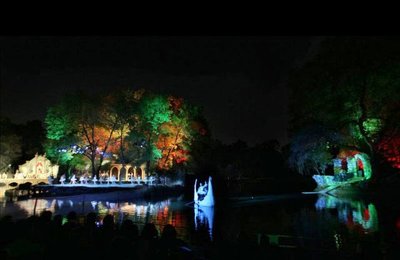 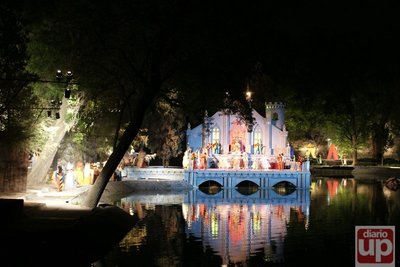 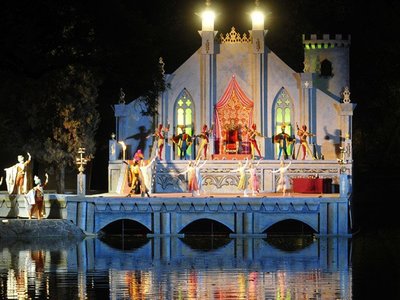 The lights dip and as darkness settles over the lake once again, all that can be heard is the quiet swish-swish of oars dipping into the water. A spotlight picks out a group of boats making their way over to an island in the middle, where the prince and his hunting friends disembark. This is the moment when the swans make their appearance and as you sit wrapping your jacket around your shoulders, your eye is drawn to a beautiful flock of swan-like ballarinas dancing under the trees in the light, their movements echoed in the still dark waters. The prince joins in. It's hard to imagine a more enchanting natural setting. You have to pinch yourself to remind yourself that you're actually in Chapultepec Park, in the middle of Mexico City, undisturbed by the thick traffic crawling up Reforma and Constituyentes just beyond the trees. 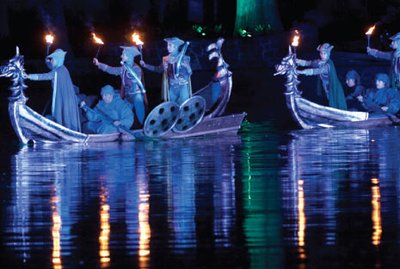 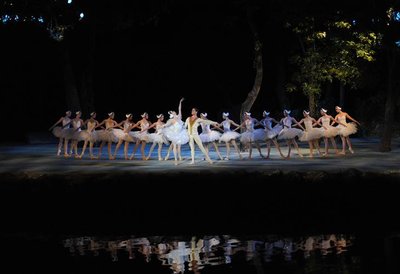 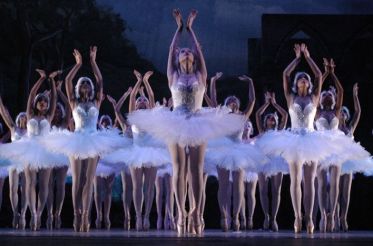 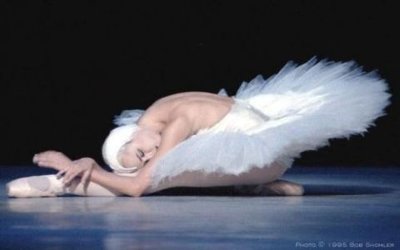 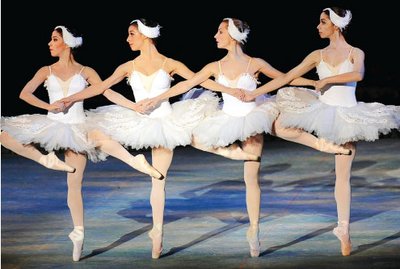 The lights go off once again and we're left momentarily as if blind, as if a thick blanket has been thrown over us. Unexpectedly, the island to the right of us flares up with flashing lights, purple, blue, red and green, like fireworks bursting through the branches, illuminating an eerie smoke-filled lair. Out comes the evil sorcerer swirling his wing-like cloak menacingly and fuming malevolently as he paces back and forth. The black swan appears to lure the prince away from the princess and decieve him. And so the story continues. 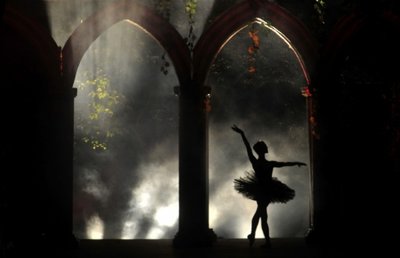 Maybe you've seen Tchaikovsky's Swan Lake ballet before. But seeing it performed by Mexico's Compañia Nacional de Danza outdoors at night in Chapultepec Park in the natural setting provided by the Lago Menor is hard to forget. They've been performing it for 36 years on the trot, every year in February and March, and it's become a permanent fixture to look forward to. I recommend it, even if you think you aren't keen on ballet. It's spectacular. Magical. 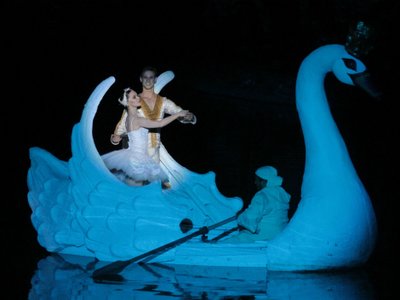 Posted by margaretm 04:05 Archived in Mexico