Is this where the Spaniards hid their gold?

So where was all the gold Marc had raved about? It was time to visit the church... Now let me warn you. Baroque is a flamboyant, exuberant style which the Catholic Church encouraged in the 17th and 18th Century to counter the effect of the Reformation. With its masses of sculptures and details, it would appeal to the emotions and leave an impression on all contemplating it. Mexican Baroque, or the churrigueresco style, can be totally overwhelming, there's no doubt about it. We were about to be overwhelmed.

We walked down a narrow staircase leading to the Church of San Francisco Javier, getting closer to Tepotzotlán's treasure trove, its Aladdin's cave of colonial gold. The group of schoolchildren one step ahead of us left the building, their eyes bright, chattering excitedly. I asked them what they had thought of the church. They all answered noisily at once and I could see their excitement. It was my turn to go in now. Imagine stepping through a low side door and finding yourself surrounded by dazzling gold altarpieces, soaring high up to the ceiling, covered in a bewildering array of gilt figures and statues. It really was like emerging into a cave full of gold and treasure. Nor did it take long to realise that the Jesuits scored high on missionary zeal and weren't exactly short of cash.

Many churches have more than one retablo or altarpiece, but this one has what you could call a collection. No fewer than...FIVE... floor-to-ceiling gilt altarpieces taking up half the church, with hundreds of saints, angels, cherubs, flowers, hearts, and other symbols. They dazzled and dazed me. I began to go cross-eyed trying to count all the angels and cherubs, and searching for a particular saint was somewhat akin to looking for Sammy the Sheep or Oor Wullie in those comics teeming with detail. This is Mexican churrigueresco art at its finest, its most extravagant. The retablos are made of white cedarwood, finely covered with gold leaf and painted in some cases. Apparently there isn't a single nail holding them together. Soft light filtered down through the alabaster windows high up in the church and the hallowed hush was only broken by Lynda's whispered commentary. It was mind-boggling to imagine all the work that went into the details and carving. I settled down to the almost impossible task of capturing on my camera what we were looking at. There was too much of it. Lynda was right, photos couldn't do it justice. 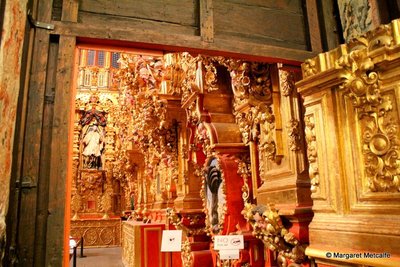 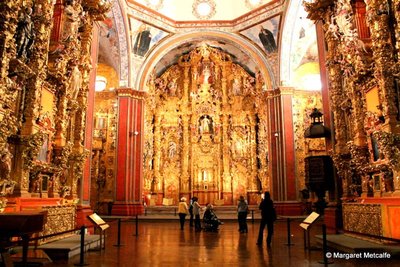 The church has no fewer than five enormous gilt altarpieces. The central one is dedicated to St Francis Xavier and apparently has 79 heads of angels and saints, 52 complete angels and other images, adding up to 138 sculptures in total. (One Hundred and One Beautiful Small Towns in Mexico, by Guillermo García Oropeza) 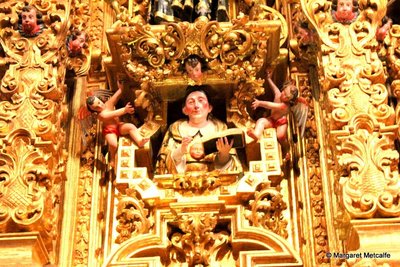 Detail on one of the altarpieces 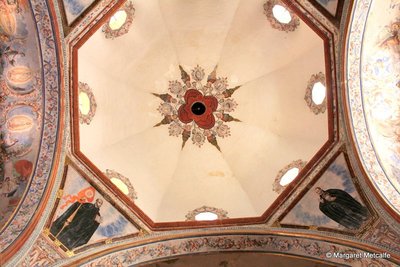 Even the ceiling was beautifully painted 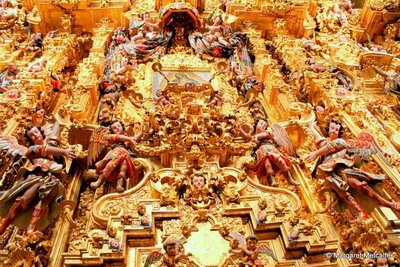 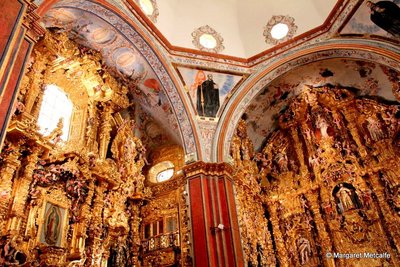 The altarpieces have remained intact over the centuries and were recently restored.

However, that wasn't the only treasure causing us to hyperventilate. Built off the side of the main nave was another curiosity, the Capilla de la Virgen de Loreto, a chapel containing a brick house representing the home of the Virgin in Nazareth. According to legend, when the original house in Nazareth was threatened to be destroyed, it was miraculously transported, first to Croatia and then to a hill in Loreto, Italy. The Jesuits had had a replica of the portal built here.

But this church still had one more secret. Behind the Capilla was perhaps the most impressive, unexpected room of all... the Camarin de la Virgen or Alcove of the Virgin. It was a small octagonal-shaped room with a dome above it and EVERY SINGLE square millimetre was lavishly and luxuriously decorated. Looking up, we could see the inside of the small nest of domes where rows of saints looked down on us until at the very top was a white dove symbolising the Holy Spirit. "Do you remember I pointed out the domes when we were outside?" Lynda reminded us. "Now you're standing inside right underneath them!" So what was this beautifully decorated room used for, I wondered? I later read somewhere that this was the Virgin's dressing room, literally. This is where she was dressed before her statue was taken out in processions. 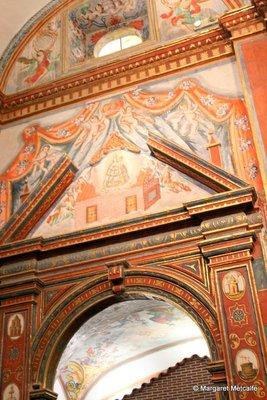 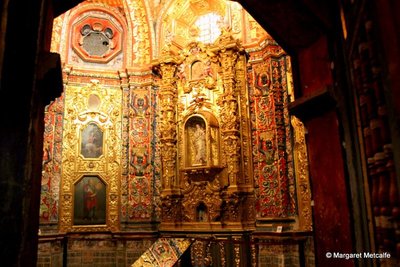 The doorway into the Alcove 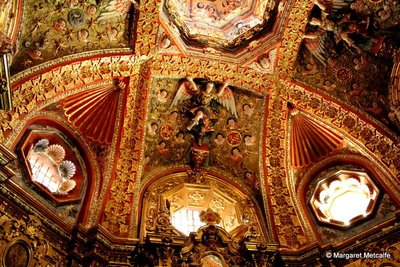 Angels and shells and other symbols can be seen 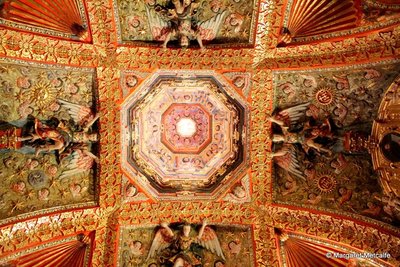 Looking directly up inside the dome 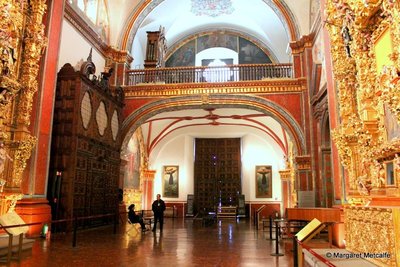 View towards the original entrance to the church

We emerged from the Jesuits' cave of treasure reeling from the sight of so much glittering gold, ornamentation and masses of detail and took in deep breaths of fresh air. What impression would this have made on the Indians back in the days of the Colonial era? I'm sure it would have caused them to believe on the spot. And where did all that gold come from? Is this where the gold handed over to Hernán Cortés by the Aztec ruler Moctezuma eventually ended up? And perhaps even more mysteriously, how did it all remain intact in this church without disappearing over the centuries? In fact, the complex is one of the few in Mexico that has been preserved completely intact, including its altarpieces and works of art. That is truly a miracle.

When thinking of what we'd just seen, all my mind could think of were "f" words, a series of adjectives which kept going round and round in my head... flamboyant, fussy, florid, fancy, full, flashy, fantastic, fine, fabulous, frenetic... And then I got caught up with some "e" words too... exquisite, exhuberant, excessive, exaggerated, extravagant, elaborate, extraordinary... which led me on to a load of "g" words...golden, glittering, garish, grand, glorious, gaudy, garnished, glamorous, grandiose... That's what Mexican Baroque does to you. It overwhelms you and leaves you searching for words to describe it and you end up finding that it's impossible to use just a couple of ordinary adjectives. You need a whole dictionary of them.

We left the museum and it was almost refreshing to look at the nearby buildings, with their simple style, devoid of ornamentation, painted in bold plain colours of yellow, orange, and red and appreciate the solid blue dome above us, that wonderful open sky. Feeling a bit peckish, a group of us made a bee-line for a cafeteria to have something simple to eat under a shady arcade. Sincronizadas and agua de guayaba. There was nothing remotely Baroque or churrigueresco about our snack or our setting. Back to modern-day reality. 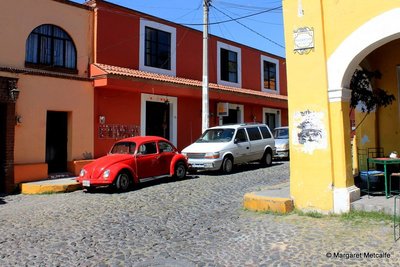 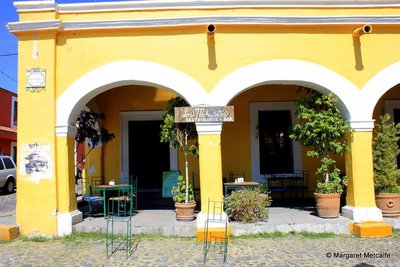 Los Molcajetes, where we had sincronizadas 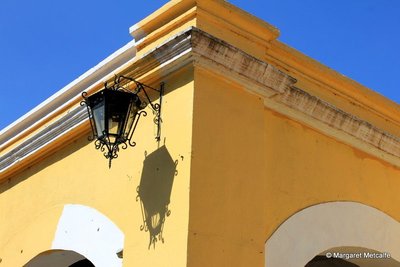 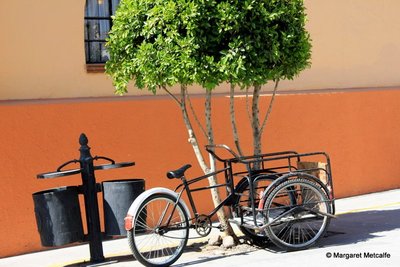 A tricycle parked nearby 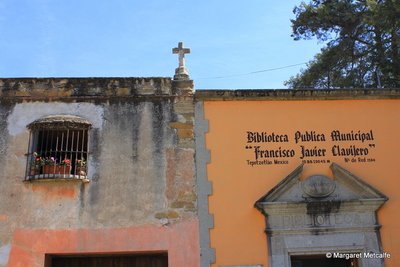 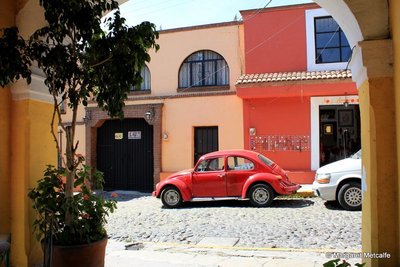 A VW Beetle parked in the street 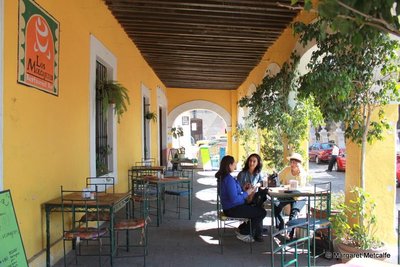 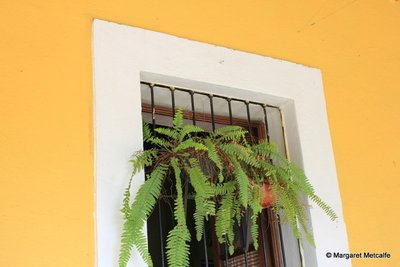 Plant in the window 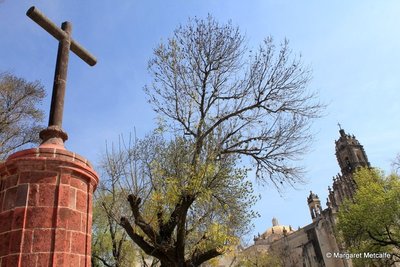 Walking back past the church 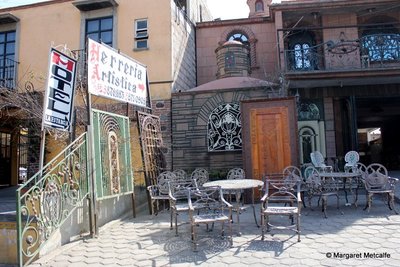 One of the many wrought-iron workshops we saw in Tepotzotlán

Margaret,I just joined the travelers point (New Hope) I would like to connect with you about the blankets for the infants.