Last weekend, the wind huffed and puffed and blew away the layer of nata over the city, leaving clear skies. I decided it was worth getting up at the crack of dawn and making my way up to Santa Fe to watch the sun rise over the volcanoes Iztaccihuatl and Popocatéptel. Izta was fast asleep but Popo was only dozing half-heartedly, letting off little wisps of a yawn. I crept away silently when the sun burst over the horizon behind them, hoping they wouldn't wake up. You see, Popo is still an active volcano and he's been getting a bit restless recently.

The silhouettes of the two volcanoes, Iztaccihuatl on the left and Popocatépetl on the right. They are just 70 km (43 miles) southeast of Mexico City.

Legend has it that Iztaccihuatl was Popo's sweetheart. The silhouette looks like a woman lying down. 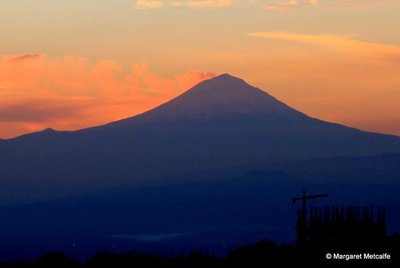 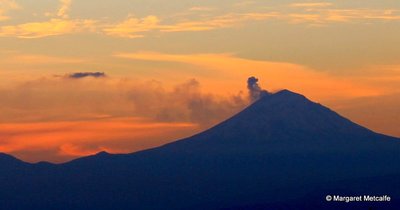 Popo lets off a bit of steam and gas.

The sun comes up on the horizon behind Iztaccihuatl, which is Mexico's third highest mountain at 5220 m (17,126 ft). 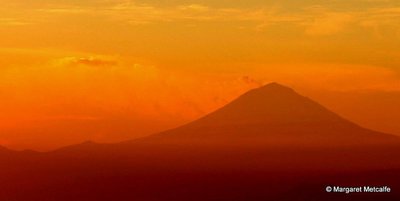 To find out about the legend of these two sweethearts, read my blog post A smoking volcano of 6th June 2011.

Popo and Izta will outlive us all! Lovely photos, Margaret!